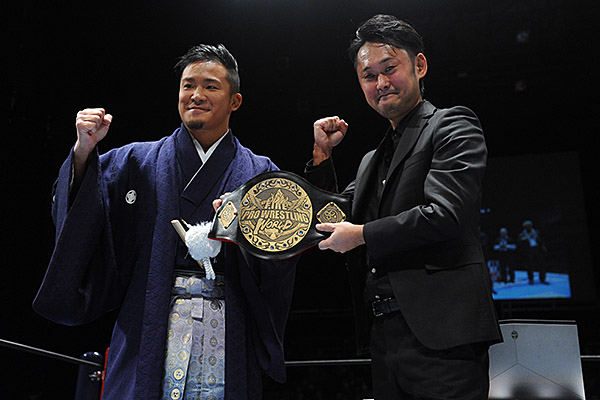 Get in the ring from the comfort of your PS4 or PC as NJPW ties up with Fire Pro Wrestling World!

The Fire Pro Wrestling series has attained legendary status in Japan, where it debuted in 1989 and has gone on to sell 3.5 million units across 20 titles. In the west, Fire Pro Wrestling Returns on PlayStation 2 and a pair of titles on the Game Boy Advance drew a dedicated cult following to thrilling in ring action and comprehensive creation tools.

After a long hiatus, and to huge acclaim both from the passionate fan base and a whole new audience, Fire Pro Wrestling World was released on Steam, entering Early Access in summer 2017 and receiving its official PC release in December. Featuring new tweaks without changing the classic feel in ring, Fire Pro World added online multiplayer and made the creation suite even bigger than before, with a new focus on sharing creations online. The game quickly became a big topic of conversation among wrestling fans and gamers, as it leapt to a 9/10 rating among Steam users.

KUSHIDA stated that ‘It’s no exaggeration to say that Fire Pro Wrestling was what really got me into pro wrestling. I played it exhaustively,’ before saying he was ‘fired up (to hear) such awesome news to start the year.’ Makabe for his part brought laughter from fans of the series with his knowledge, saying ‘Of course I played the hell out of it. Hurricane Rikimaru, Victory Musashi, those were my guys!’

NJPW and Fire Pro start their collaboration this summer, when players will be able to use real NJPW wrestlers and their moves in the game. But that’s not all. A brand new story mode will see you injected into the mix of New Japan, where the real life events of NJPW in 2017 will play out around you as your own story unfolds.

To go along with all this huge news was the announcement that you’ll be able to play all of this content on console as well as PC, when Fire Pro Wrestling World is released on PlayStation 4 this summer. As Makabe himself said ‘this is straight up awesome. I’m delighted!’

2: Story mode inspired by the real life events of NJPW in 2017! Put yourself in the middle of a huge year in New Japan history!

The NJPW content becomes available in the summer, but you can download Fire Pro Wrestling World for PC now!

*Fire Pro World has just left Steam Early Access and is on release sale. The special price of $13.39 lasts until January 5, when the price becomes set at $29.99*