The Draw in the Downpour: massive crowd braves the pouring rain to see Suzuki and Okada go the 30 minute distance!!

The main attraction of the first day was Suzuki’s career 30th anniversary match: a singles exhibition between Suzuki and Kazuchika Okada. The Rainmaker lived up to his name, as rain began falling from around midday and intensified into a torrent by match time. Yet this did not deter a massive crowd (estimated by event staff at 18,000) in the open air to see one of the most unique matches and cards in memory.

Suzuki and Okada have met several times in the past. Yet the freshest encounter in fans’ minds as they huddled in raincoats was on August 8 2017, again in Yokohama at the Cultural Gymnasium; a thirty minute draw at a critical point of the G1 Climax. 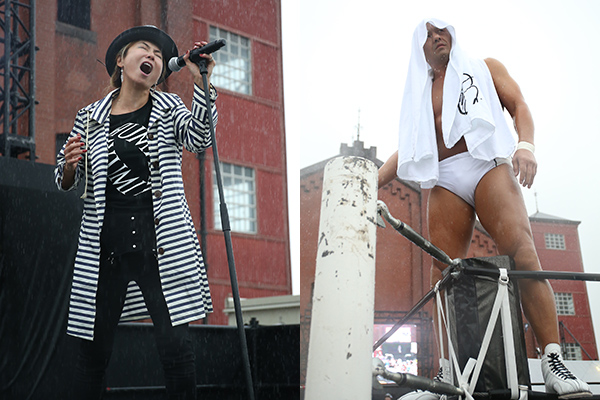 Suzuki pulls out all the stops in his home town, and especially here on his 30th anniversary. As Okada brought the rain, Suzuki sought to become the wind, accompanied by a live rendition by Ayumi Nakamura of a new arrangement for his Kaze ni Nare theme, and clad in white as a throwback to his UWF days. 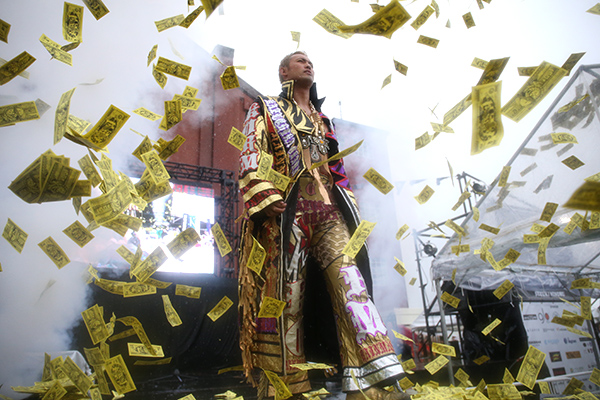 Yet Okada wasn’t to be outdone, and we saw in his entrance a hint of the brash Rainmaker that hasn’t come out since his defeat at the hands of Kenny Omega at Dominion. Okada Dollars shot into the grey skies, and money rained thicker than water, at least for a moment.

The two, perhaps sensing the rain would be an impairment later on, went full tilt in the early going, attacking each other with blows, and brawling outside. Suzuki would eventually target Okada’s arm, and while the Rainmaker would come back with a neckbreaker, he would try to charge at Suzuki to follow up. A slight slip on the flooded canvas allowed Suzuki to dip in and clinch a sleeper, though the follow up Gotch Piledriver attempt was turned into a reverse neckbreaker. 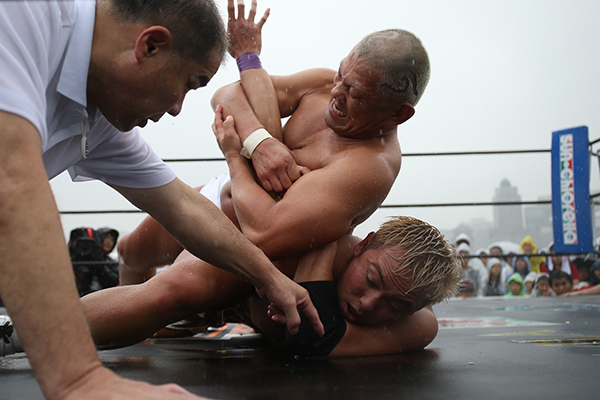 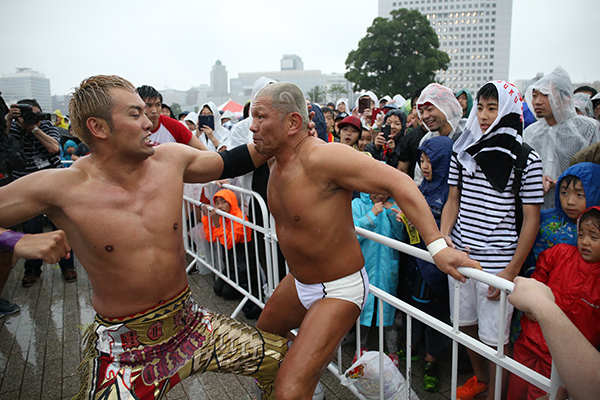 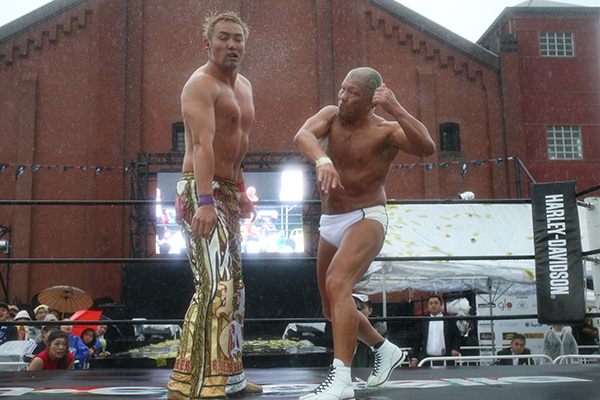 We’d see the rain come into play at different points in the match. Okada would attempt his signature diving elbow drop on one occasion, but stopping to wipe water off the ropes gave Suzuki enough time to avoid contact. Later, Okada would hit a short range lariat, and though he couldn’t convert with a Rainmaker, Okada showed amazing balance to hit his explosive dropkick in the rain; something Suzuki attempted to match and raise with kicks of his own.

At the 25 minute mark, Suzuki attempted a Gotch Piledriver, but Okada countered, and hit a thunderous Gotch Style Tombstone. 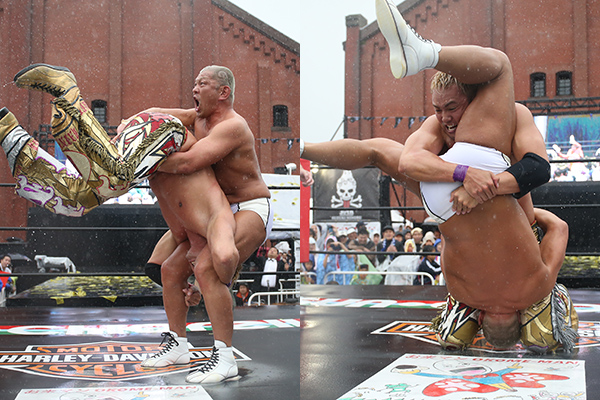 Again though, Okada couldn’t score with a Rainmaker. Countered into an attempt at the Octopus stretch, Okada would struggle, and both lost some footing in the wet. That, perhaps, was enough to save a second big loss coming in three weeks for the former IWGP Champion. Suzuki would negotiate into a grounded Octopus, but couldn’t apply enough pressure to submit Okada before the 30 minutes elapsed. 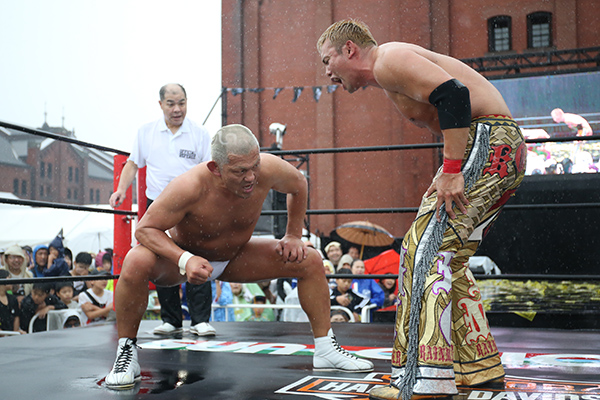 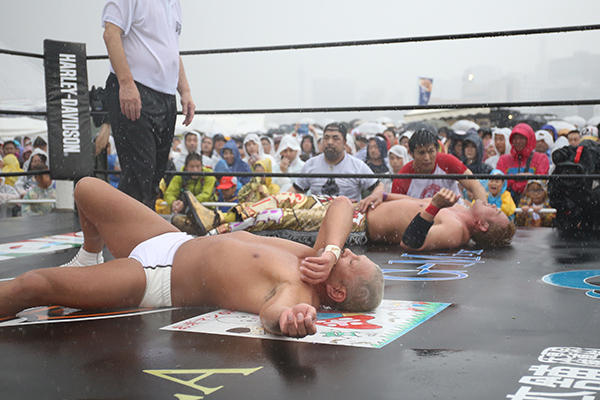 It was a phenomenal match in an unforgettable setting. Applause and chants for local folk hero Suzuki turned into respectful calls of ‘Okada’ as Minoru took the mic.

‘It doesn’t matter that I was close, or that I did my best. I didn’t win. (To the kids in the front rows of the crowd) When you go out into the world, you have to win and keep winning. The world isn’t going to cut you a break. Oi, all you dispirited middle aged guys too, I just turned 50! A 30 year old couldn’t beat me today, nobody can! I’m taking everything I want. The IWGP title? I’ve already booked my place. You SOBs thinking of leaving now? That this is done? There’s awesome people to come! This festival’s still got way more in store! And I’m not going to close with that, but with this: Thank you!’ 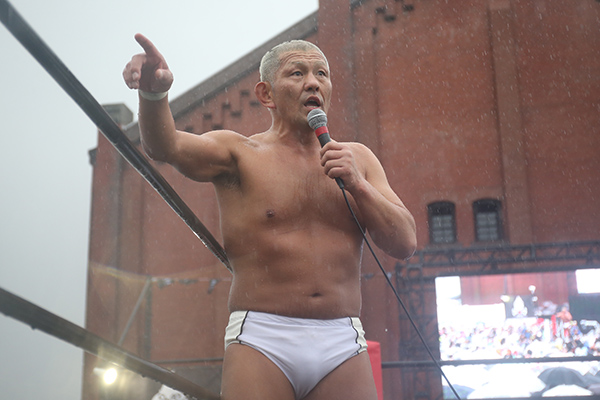