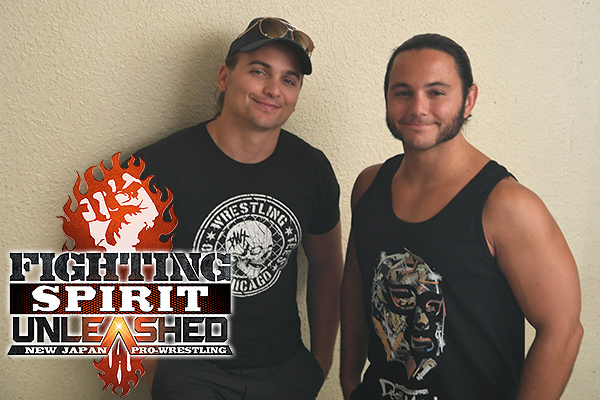 Young Bucks Interview: We will prove why we are the best tag team in the professional wrestling!! －Matt Jackson

“FIGHTING SPIRIT UNLEASHED” in Long Beach is only a month away!

We had a recent interview with current IWGP tag team champions Young Bucks. They shared their thoughts about the NJPW events in the USA, the difference between NJPW and WWE and much, much more!! 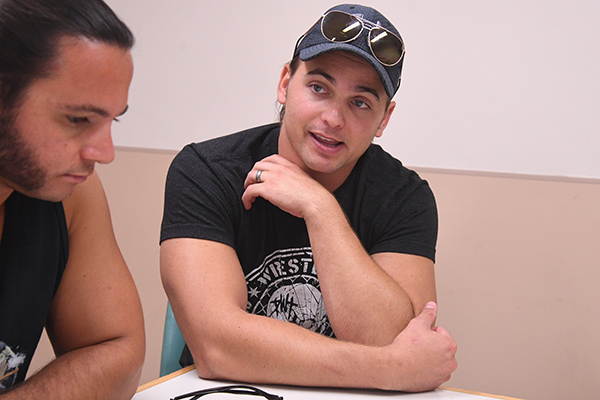 Q: New Japan actually went over to the States to hold their own show in July 2017. What are your thoughts on that?

Nick: When we first heard that they are going to run some shows in the US, we were very excited, we were blown away, because we felt that was the next step for New Japan to become a global company. And Los Angeles, Long Beach that area is probably the best place to make that start, because of such a big market. And we were more excited because we come from Los Angles, we live there, we were born and raise in California. So when we heard there is going to be shows there, we are like Yes! This is going to be awesome. We can bring our families, they can watch us live, some of those family members for the first time, so we were excited for a lot of those things.

Matt: So many times, we wrestled. We have to get an airplane, and fly overseas 12 hours with fly across countries every weekend to get somewhere, so anytime I just have to drive from my house to building to wrestle. Anytime we do a show in California, it’s a little more special for us. That’s where we live.

Q: Did you hear anything from your fanbase about New Japan coming to the USA last year?

Nick: Our family was thrilled, they were very happy, very excited, they couldn’t wait to see New Japan for the very first time. And a lot of fans in America they can’t fly to Japan; they can’t afford to tickets, so they are excited. I feel like that it’s been a huge part of the growth New Japan, because of America, such a big fanbase for this type of wrestling.

Matt: Oh yeah, I heard a lot of buzz, a lot of people are excited, because usually the only time, you have a chance to watch New Japan is on NJPW world, so for into come to Los Angeles, people were thrilled. And I remember that website crashed within 30 minutes, so just say that people were excited would be an understatement.

Q: What were your thoughts regarding your main event match at Strong Styles Evolved? 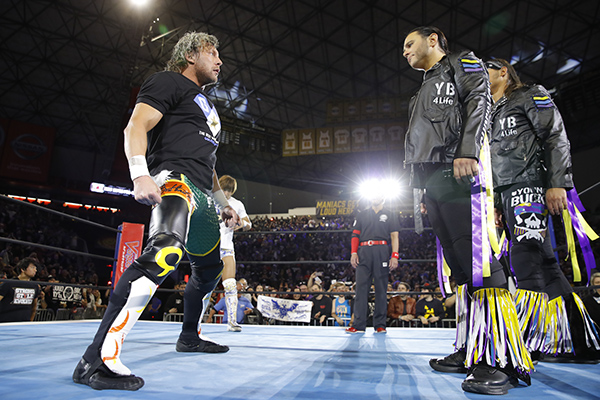 Nick: When we heard we are the main event of that show we are very exciting, even more exciting, when I was announced that we are going to wrestle Ibushi, Kenny Omega. But it was a little bittersweet because we are friends with them, so it’s like, I don’t know it was kind of scary, Oh men, I don’t want to hurt my friends, but at same time I want to have a good match. I want to excite all fans watching live, let’s go out there to have the best match entertaining fans, because they deserve it. We felt like it was probably one of our favorite tag matches we had all year.

Matt: It was a big opportunity for us because we are here in the home state, California. We were wrestling two of our favorite wrestlers, Kenny Omega, Kota Ibushi, and it was a main event. Maybe we would never have an opportunity like this. So we knew we have had a good performance that night because we might not have a chance like that ever again.

Q: You have been wrestling at New Japan for a while. Do you feel it was one of the biggest opportunities in your career?

Nick: We have been wrestling here for almost 5 years now right? So we felt like that New Japan put the trusting us to be able to deliver big main event match in America. We follow okay this is cool for them to give us this opportunity.

Matt: It’s difficult being foreign wrestlers wrestling in Japan, for the Japanese company. You started as juniors first match, you walk up, walk up, walk up, finally you get big opportunity and you have to hit homerun.

Q: Did you have pressure?

Nick: Big pressure, but we are used to big pressure because everywhere in the world. We main events no matter what company, we wrestled for. New Japan was just the only company that we didn’t wrestle for main event.

Q: Did you feel any expectations from NJPW?

Nick: At that point, that show was already sold out. And Matt and I were actually kind of disappointed. If they would have waited to announce that match, in a bigger building, we would have sold maybe 4 or 5 more thousand tickets.

Matt: I think Golden Lovers vs Young Bucks, we could sold out Staple Center. 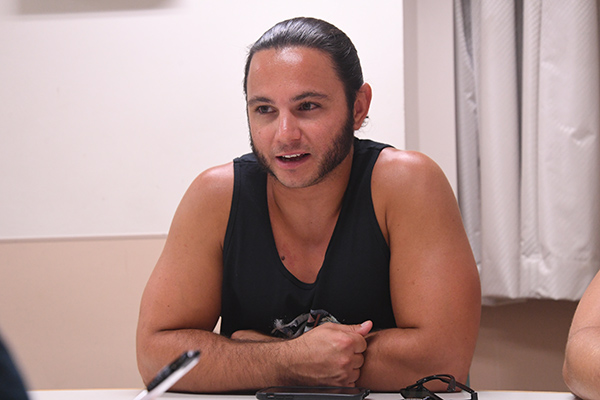 Q: The Cow Palace is a legendry, classic venue. Did you like wrestling there?

Nick: I loved it. That was our first time ever wrestling at the Cow Palace. So at this point of our career, because we have been wrestling for 15 years for us to wrestle somewhere for the first time, it’s special. Matter fact tonight, first time here, so it’s always more exciting for the first time to wrestle. Especially our home state of California, so we were like YES! This is cool, this is like something on our list.

Matt: And it was big match for us also, because it was the first title defense, heavyweight tag team titles, EVIL SANADA. And we just wrestled them a few weeks before, it was in Osaka? Many people said maybe best bout that night. So we have big pressure again. How would we make a different match, and people said again good match. 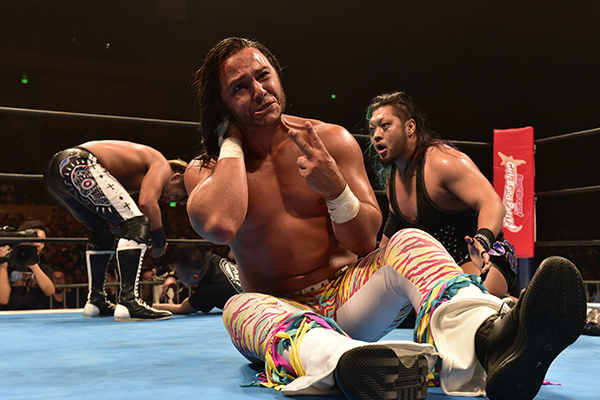 Q: After that match, you actually mentioned you would like to wrestle against EVIL and SANADA. Is that true?

Nick: Oh yeah. I would like to wrestle them again. We’ve only wrestled them 2 time right? In ROH we got wrestled then 6man or 8man tag match, but 2 on 2 match is what we prefer. And I would love to do that again. I feel like those guys bring out best in us.

Matt: They are very good competitors.

Q: There are several tag teams in New Japan, who do you think the biggest competitors other rivalry?

Matt: Well, after what happen at Cow Palace, the end of the show, we would like to wrestle G.O.D. 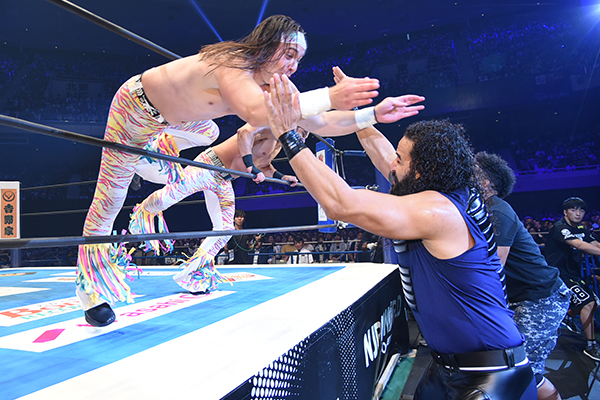 Nick: I think that will be a very good match, Tama Tonga, Tanga Loa. Other than them, I think it would be interesting to see us wrestle KES because they are so tall.

Q: Have you ever wrestled KES in the past?

Matt: Malti man match in ROH, never 2 on 2. We want to wrestle anybody.

Q: You made transition into heavyweights, what do you think about that?

Nick; Different match now. We won the junior titles 7 times, so it was time for us to move on.

Matt: Let’s us change our styles.

Q: Foreign wrestlers are now holding the championship belts except Never Openweight championship. Do you have any thoughts about this?

Nick: I think it’s crazy. It shows you how much talent there is worldwide. Every nationality has good wrestlers everywhere. New Japan is all about expanding and I feel like it’s good because it shows how many different wrestlers are around the world.

Matt: I think pro-wrestling is the healthiest stage right now. I think the wrestling economy is booming. Wrestling is cool again because of the vast majority of wrestlers in styles, characters and talent.

Q: What do you think of former WWE wrestlers that are wrestling in NJPW right now? 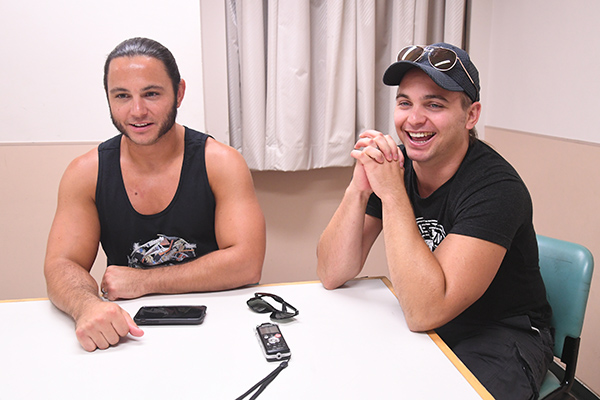 Nick: I think it’s great. It shows you how big of company New Japan is. And it shows you that even from up bigger company like WWE, those superstars want to compete here because they know deep down in their head that this is where the best wrestling is.

Matt: New Japan is the destination now. Everybody wants to come here because has the best wrestlers.

Q: What do you think are differences with match style between in the USA and in Japan?

Matt: I think the style of NJPW, Japanese Strong Style, is so unique. Because the wrestling that they used to watching is more entertainment, character. In here is all about strong style wrestling. So many people say “Oh WWE is too much of a soap opera.” But they want to watch competitive hard hitting wrestling.

Nick: Here is still sports. In America, they like that.

Matt: So it’s unique to them, special.

Q: What can we expect from your match in September?

Nick: We are going to show that this is the best wrestling in the world. And if you don’t come and you are not there live, you are missing that great show.

Matt: Every time we come to the States, it’s always special. A big match happens, a big moment happens, you can’t miss the show because something crazy always happen. And we will prove why we are the hottest acts in pro-wrestling and why we are the best tag team in professional wrestling. You should be there in person to see firsthand.

Nick: And hopefully we could put our championship belts on the line. 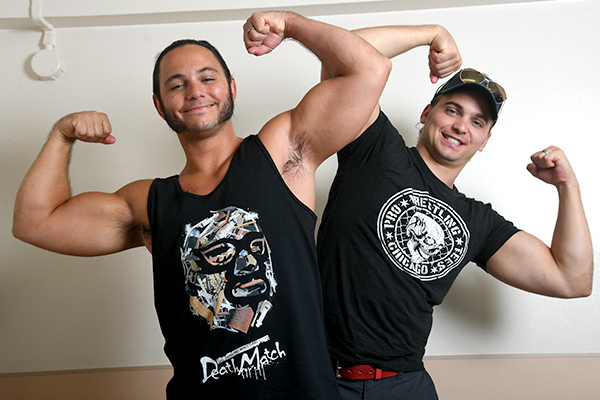