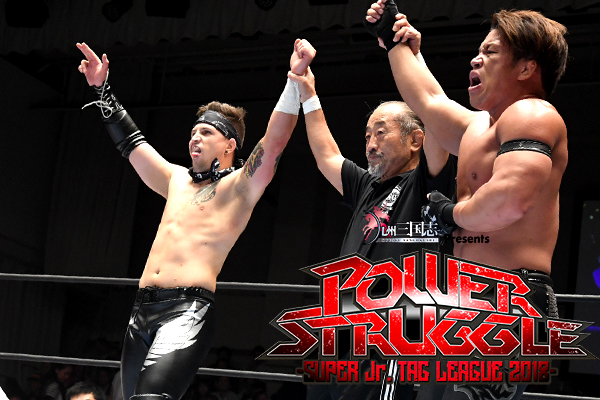 Finding the Mark: How Bullet Club Gave Robbie Eagles a Shot, and How the Sniper Took It.

There’s more than a few reasons to be excited by the Super Junior Tag League this year. For one, the presence of junior tag teams in main event positions always leads to breathtaking spectacles and incredible matches.

Then there’s the fact that for the first time this year, the usual single elimination tournament is being contested as a league. Eight teams are facing one another in round robin style, with two points for a win, one for a draw and zero for a loss. After league action finishes on November 1, the top two teams will meet at Power Struggle on Saturday November 3 in Osaka to crown a winner. That new dynamic is ensuring fresh and exciting matchups, especially as a pair of debutants have also been grabbing headlines.

Shingo Takagi has certainly made a mark as the new entry into Los Ingobernables De Japon. Yet while NJPW fans already had a taste of what the Dragon could do at King of Pro Wrestling, Taiji Ishimori’s partner Robbie Eagles was a new prospect to most as the league started. His nickname of ‘The Sniper of the Skies’ certainly conjured up a high flying image, but the young Australian picked up a debut win with submission mastery effective enough to tap out the legendary Jyushin Thunder Liger. 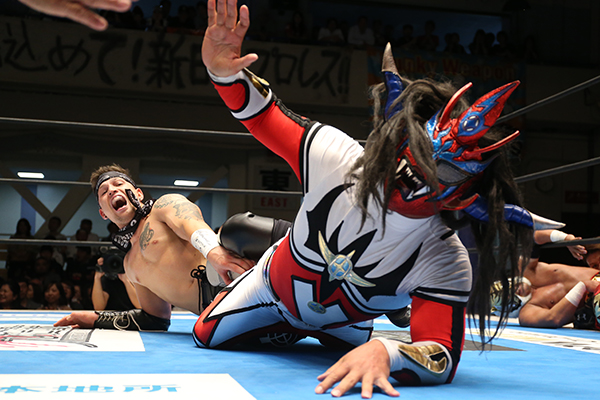 On October 16 in Korakuen Hall, Eagles and Ishimori relentlessly targeted Liger’s knee, culminating in a 450 from Eagles across the leg and the ‘Ron Miller Special’ finishing the job. One couldn’t ask for a better debut, and to a Bullet Club undergoing radical change with the insertion of Jay White, Jado and Gedo at King of Pro Wrestling, it was an important declaration of intent for the ‘New Era’ of the stable.

The team’s momentum continued to grow the next night, as Eagles and Ishimori defeated ACH and Ryusuke Taguchi. Eagles’ name certainly seems on the rise, and to gain more insight on the background of this NJPW newcomer, we spoke to the man himself, and his partner Taiji Ishimori.

‘People called me ‘the Tactician’ 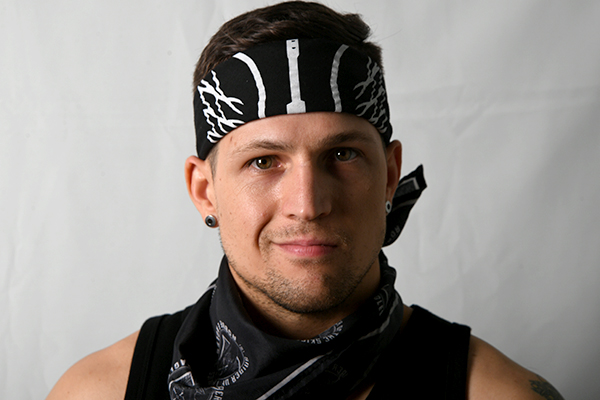 ‘I wasn’t particularly big body wise, but I’ve been athletic since I was a kid. I grew up playing soccer and rugby’.

‘I got my ring name from Ryan Eagles. He’s my ‘wrestling brother’, you could say. He trained me, and gave me his name as a blessing of sorts. His wife, Madison Eagles is a wrestler too. She’s a really strong submission wrestler, so I was really trained by the both of them together.’

Eagles acclimatized himself quickly to life in the ring, and used phenomenal natural athleticism to distinguish himself. He would capture PWA’s A1 GP Championship a mere eight months after his debut, in November 2008. From there, his career would advance with title wins in another Australian promotion, MCW, before Eagles further developed his resume in America.

‘I’ve been trained in Lucha Libre, and I think with my name, you get the image of a high flier. I pride myself on my submissions though. Even early in my career people talked about me as a strategic wrestler. They called me ‘the Tactician’.’

‘Choosing a body part, the head, the arm, the leg, targeting that, picking it apart. Then in the end, going completely against what my opponent is expecting to get the win. That’s my style, basically. I really felt I wanted to use that to prove myself on the world stage.’

‘Ospreay is the best in the world. And I’ve tapped him out’ 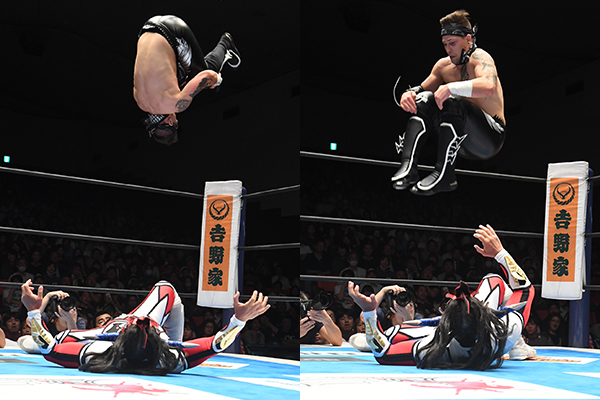 For Eagles, a career turning point would come in February 2018 when the NJPW roster toured Australia. Teaming with Mike Moretti, Eagles faced EVIL and SANADA in a tag match on February 18, then was in a three way match the next night with Cody and Will Ospreay. Though Eagles tasted defeat on both nights, he did enough to impress everybody watching.

‘It was a big chance for me, and a big challenge. Especially the three way, when I was in there on my own with people of the caliber of Cody and Ospreay, I really felt I had to represent Australian pro wrestling in general. I think those matches are a big reason why I’m able to compete in New Japan today’.

Eagles and Ospreay were no strangers to one another. The two had fought in rings across the world, and Ospreay had been singing the praises of young Eagles for a long time. The respect is mutual.

Eagles would have a fateful meeting in March. The Sniper of the Skies found himself face to face with a man who had just left Pro Wrestling NOAH to go freelance: Taiji Ishimori.

‘It was in America, in PWG. I was familiar with him obviously, and I’d been following his career, but actually seeing him wrestle in person made me realise how close he was to me stylistically. I got a feeling we would be pretty interesting together. And when we got to talking I found out he’s a pretty interesting guy (laughs).’

For his part, Ishimori also found himself gelling with the young Australian on their first meeting. ‘He reached out to me, wanted to spend time with me. He asked to train together or hang out. I’d heard of him before but that was the first time I’d seen him wrestle. He had this unique moveset, and a lot of guts. He wouldn’t back down from anyone bigger than him. He definitely caught my interest.’

‘After I met him that time in PWG, I went out and did some homework. Looking at the moves he was using, he reminded me of myself earlier in my career. He was really keen to go worldwide, to the U.K., Germany, America and prove himself and that fit my mindset at the time. So I was hoping our paths would cross again.’

‘My thinking from the beginning was, “if I’m gonna team with anyone, I want Eagles”’ 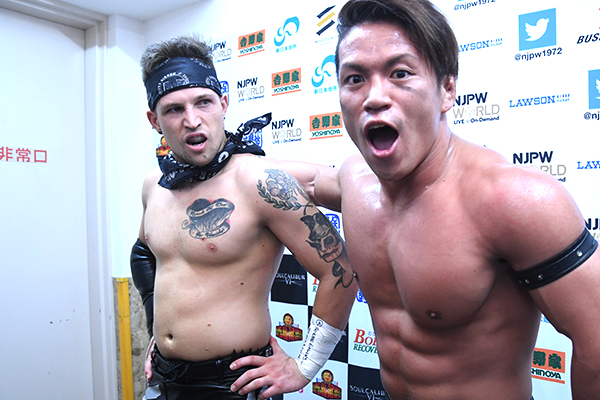 ‘Bullet Club is recruiting new members. So get on Twitter, Facebook, Instagram and tell us who you think should join. When the next tour comes round, I’ll be bringing my new partner, so get hyped.’

Taiji Ishimori made this comment in Hiroshima on September 15 with the Super Junior Tag League in mind. During King of Pro Wrestling on October 8, that new partner’s name was announced: Robbie Eagles.

‘We got a lot of applications. Lots of people all over the world want to join the Bullet Club, but truth be told, my thinking from the beginning was “if I’m gonna team with anyone, I want it to be Eagles.”’

Eagles himself couldn’t hide his excitement at Ishimori’s invitation. ‘I mean, it was just so exciting. Bullet Club is a global name, it transcends borders, and it was the perfect chance for the world to know the name Robbie Eagles as well. For me, no hesitation, it was a “yes”.’

Invitation accepted, it was on to Korakuen. Ishimori had this to say on Eagles’ stunning submission of Liger. ‘He’s just very calm, very cool, and very much a tactician. He thinks about every little thing. Watch that match back and you see he never changes focus, it’s so completely honed in on the knee. He’s very different to most high fliers; he can fly, he showed that but it’s just one string to his bow. He finished him with a submission.’

That submission was named after a famous Australian figure, as Eagles explains. ‘The Ron Miller Special name comes from the Australian wrestler Ron Miller, who was around from the 60s to the 80s. When Andre the Giant and Hulk Hogan came to Australia, he’d be the guy they called to wrestle them. (Miller also wrestled in NJPW in May 1985) He was a real pioneer, and his Reverse Figure Four Leglock left a big impression on me. That’s what inspired that hold. But I have a lot more moves at my disposal. You’ll just have to keep watching to see them all.’ 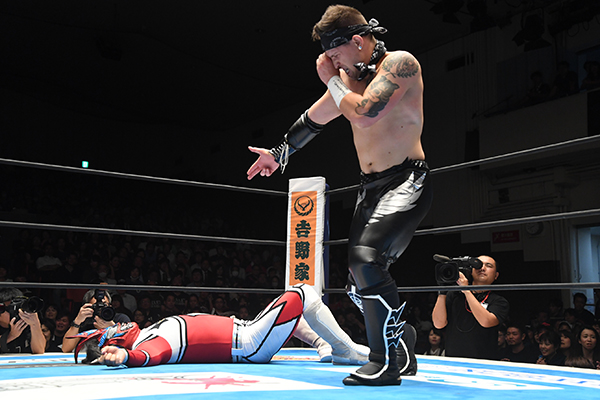 When we spoke with Ishimori and Eagles, there were still five matches to go in their Super Junior Tag League campaign. Buoyed by the response to, and performance of, his new team, Ishimori laughed off the idea anyone else could win the league. ‘I mean, it could only be us. That first match, you saw Eagles wasn’t always at his smoothest, it was still his debut, but the second match and second win, I knew, “we’ve got this”. You ain’t seen nothing yet when it comes to Eagles.’

‘There’s a lot of double teams we have together you haven’t seen yet either. Basically, you’d be idiotic to take your eyes off us. I mean, I’m already a NEVER Six man champion, but he’s pulling his weight and some. His tactical ability, my skill and experience; we’re going straight to the top.’

Ishimori is confident indeed, and Eagles is the same way. Eyes on the prize, just thinking about his next target provokes a sharp glare that makes his ‘Sniper’ nickname easily understood. ‘The Japanese fans are unfamiliar with Australian Pro Wrestling, and I’m not done showing them yet. But that’s not all of who I am. The whole world is in my sights, to take down, and to learn from in the process. The fans are going to learn soon enough why my nickname is “the Sniper”.’ 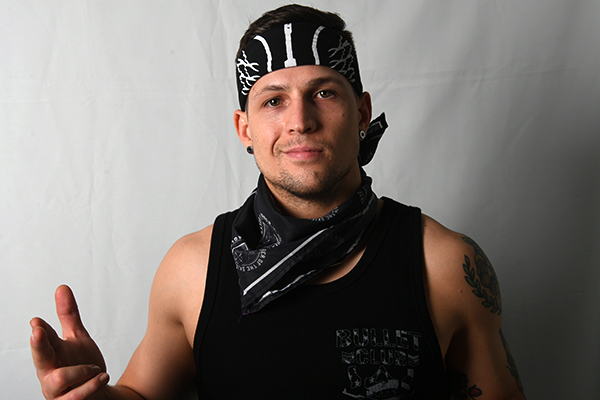