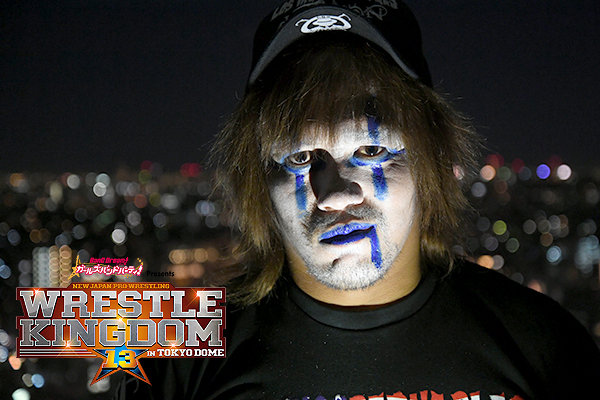 You can enjoy NJPW matches on NJPW World: https://njpwworld.com/

‘It’s my fault that he’s got that chip on his shoulder. That’s on me.’ 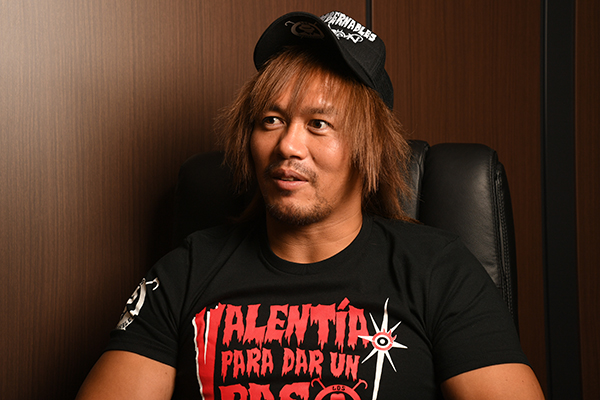 — Here we are, Naito, January 4th, Wrestle Kingdom 13 is just around the corner. The topic is your upcoming match with Chris Jericho. What’s going through your mind, right now?

Naito: Looking back, my 2018 started and ended with Jericho. Although January 4th, Wrestle Kingdom, marks the beginning of the new year, that’s not the case for us wrestlers. The new year can’t begin until Wrestle Kingdom ends.

— Your feud dates back to January 5th of 2018, in Korakuen Hall. One day before that day, Jericho said, “I will never return to New Japan, again!” That was after his loss to Kenny Omega. However, he turned his sights towards you.

Naito: At that time, I had no idea that we’d be on a collision course for the Dome. In my entire career, I’ve never had a feud go on this long. I was at the mercy of Jericho. However, it’s my own fault, because I couldn’t finish him at Dominion in Osaka-Jo Hall back in June.

— You lost that match back in June, and Jericho captured your IWGP Intercontinental title. That was the only time you two ever faced each other in a match. But since then, you’ve been able to provoke Jericho on social media, with your impression of him.

Naito: Yeah. Getting jumped by someone from the crowd is not something I’m used to. (Sly smile)

— That was back on May 4th, in Fukuoka. After the January 5th attack, Jericho vanished for some time. He attacked you while disguised as an L.I.J fan, and left you in bloody pulp.

Naito: And then he sent me a couple of video messages after that. I started to think, ‘Maybe he doesn’t have anything else to keep himself busy?’ (Grins) So, I decided to respond, by putting on that ridiculous make-up. I spit water at him at the press conference, too. I had quite a bit of fun provoking Jericho, even out of the ring. 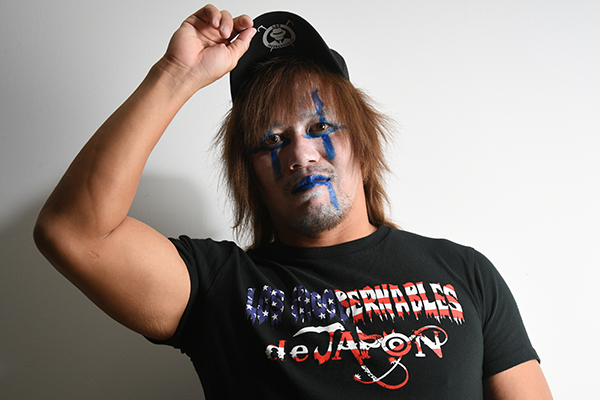 — You gave smartphone site members and exclusive wallpaper of you with that make-up on. So, you got a kick out of all of these exchanges, didn’t you?

Naito: But at the end of the day, this is New Japan. It doesn’t matter how big of a star he thinks he is, I can’t let him act like he owns the place.

— Before, you’ve said, “I don’t want to give credit to Jericho for just having a few matches throughout the year while he tours with his rock band.”

Naito: Yeah. But I do believe that the winner is proven right. Even though he doesn’t wrestle a lot, and he’s pre-occupied with another career, I’m the one who lost to him in Osaka. It’s my fault that he’s got that chip on his shoulder. That’s on me.

‘Throughout our feud, I was reminded that pro-wrestling is about more than just what happens in the ring.’ 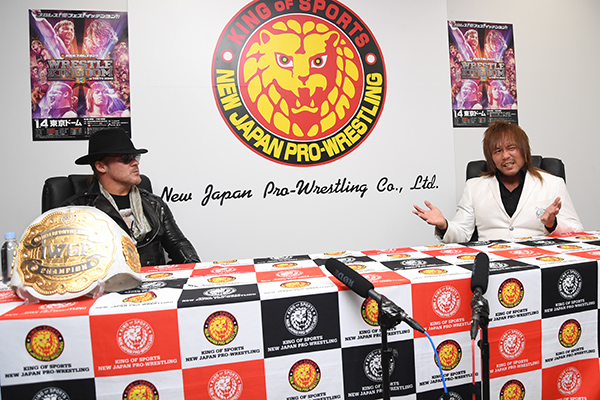 — You called Jericho a ‘self-proclaimed star’, do you still have that opinion of him?

Naito: I pretty much only focus on New Japan. So the only image I had of him was a plain-looking foreign Junior who I remembered from when I was a fan. But I’ve heard about him from others. And as I looked into him more, I got why he’s a big deal.

— You’ve come to that realization. Jericho was on that show at the Budokan, on July 5th, 1997, where you watched and decided then to become a pro-wrestler.

Naito: Yes. There was an 8 man tag match, with all the guys who couldn’t make it to the semi-finals of the Best of the Super Jr. Or so I’ve been told. (Laughs)

— It sounds like you don’t really remember him being there.

Naito: (Chuckles) I heard that that was his debut in New Japan. I was 15 at the time. When I saw all the entrants, I thought, ‘Who’s Jericho?’ I didn’t know him and I didn’t think he’d make it to the finals.

— After that, Jericho signed with the WWF (Now WWE) and quickly shot up to become one of the top stars of the company.

Naito: That was 20 years ago. I had never seen Jericho step into this ring since, so I didn’t get why New Japan treated him like such a big deal. However, every time I went to America with New Japan or ROH, fans kept mentioning Jericho to me. So, I got a sense of how big his name is.

— What were your thoughts of Jericho after you finally faced him?

Naito: I could feel his intent, as if he was truly trying to kill me. He was different from what I expected, different from other American wrestlers. He was probably switching things up because he was in New Japan. Besides just his wrestling, I understood why he’s been a top start for many years. He has a nimble mind. He’s put it all together to get to the point he’s at now.

— He’s constantly reinventing and improving himself. Other Juniors who have come through New Japan before, like Eddie Guerrero, have gone on to hold WWE Heavyweight titles. However, among them all, Jericho is probably the most accomplished.

Naito: I heard that he was the first man to unify the WWE and WCW Heavyweight titles. Is that right?

— That’s true. He beat The Rock and Steve Austin on the same night in October of 2001, becoming the first ever undisputed champion.

Naito: Even people like me, who only focusses on New Japan, knows those names. How can I put this… Throughout our feud, I was reminded that pro-wrestling is about more than just what happens in the ring.

‘That’s just the kind of superstar he is, willing to shout such an obvious lie without hesitation.’ 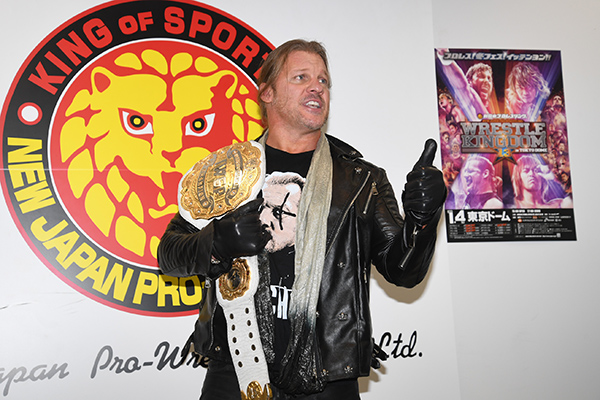 — At the December 15th press conference, Jericho proclaimed, “I pay all of your salaries!” What are your thoughts on that statement?

Naito: Hahaha. I thought I was at the mercy of Jericho, but actually, it’s thanks to him that I can eat (Sly smile). According to him, the Lion Mark is paid by the Lion Heart (Grins). I admire that he says those things. But a superstar like him is only good at bluffing.

Naito: Even though he says it’s because of him that everyone can get paid, don’t our fans know that that is obviously false? But that’s just the kind of superstar he is, willing to shout such an obvious lie without hesitation.

— After you spit water in his face, he vowed to, “End your career in the Tokyo Dome,” as he fumed away.

Naito: I guess that’s what he believes. I feel like he said something similar when he fought Kenny last year (Laughs). Then he went on to tell everyone around the world that they can’t miss this match.

— He said, “If you haven’t bought a ticket yet, you’d better buy it now. You better not miss Wrestle Kingdom 13!”

Naito: I can see why New Japan kisses his ass, because he’s a good marketer (Grins). Actually, that all works in my favor because it sets a bigger stage for me to kicks his ass on.

— Also, in an interview on our official site he said, “I know Naito just wants to be like me, but he can’t. I have won many more titles and trophies than he ever will. Naito’s merchandise sales will never reach my own. Where’s the Naito ice cream bar?” He seems to be implying that he’s on a different level than you.

Naito: I read that. It made me laugh, a little. Even though I’m extremely popular, he’s right, I don’t have an ice cream bar. He’s probably knows a lot about ice cream, that’s why his physique has changed so much since his Junior days (Grins).

Naito: During our match, and every time he attacked me, I wondered, ‘Was this guy really a Junior before?’ Actually, he’s not too big. I’ll give him credit for how well he can still move.

‘If says he’s still interested in me, I’d consider it. However, that would have to happen outside of New Japan.’ 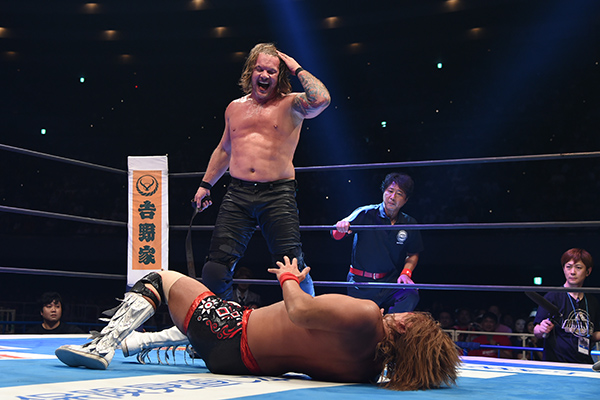 — You said you were at the mercy of Jericho all year, you certainly can’t afford to lose to the same man twice, can you?

Naito: I can’t lose. If he beats me again, he will have an even greater sense of entitlement in New
Japan. And it’ll be a black mark on me. However, as much as I’d like to talk, we would still just be 1 and 1, so I can’t say too much to that.

Naito: If it’s up to me, I want to end this with Jericho. But if says he’s still interested in me, I’d consider it. However, that would have to happen outside of New Japan.

— Outside of New Japan.

Naito: Even though he’s saying he’s going to end my career, I actually believe this will be his last time in New Japan.

— You said at the press conference, “If I can take his title, then he’d have nothing left. New Japan won’t have to call him ever again, thankfully.”

Naito: It’s all because he was able to take that title from me in Osaka. I know that New Japan wants to use his name for overseas expansion, but I want them to stop kissing up to him. That’ll happen once I take back that title. I’ve said this many times before, but they should focus on showing the pure New Japan style to the world, instead of altering it.

— I understand your point. Can you tell us what’s driving you going in this match? How are you going to punctuate this milestone while the world pays attention?

Naito: As I said before, my intention for this Tokyo Dome show is to expel Jericho from New Japan. I will get him back for having to be at his mercy all year. That’s my duty at this Wrestle Kingdom. And even though it’s coming up, very soon… TRANQUILO! See you at the Tokyo Dome (Grins). 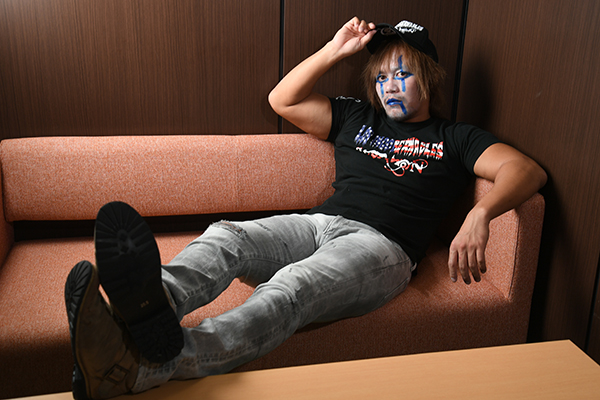