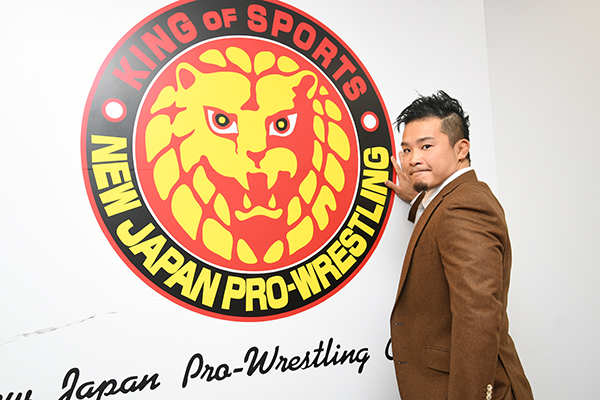 “It’s been a crazily fulfilling 8 years” – KUSHIDA announces his retirement from NJPW at the end of January. A question from Tanahashi leads to tears.

Three days after the conclusion of “WRESTLE KINGDOM 13 in Tokyo Dome” a press conference hosted by the NJPW Chairman, Mr. Naoki Sugabayashi, was held at the NJPW Corporate Headquarters. After discussion about the topics; “Regarding Kota Ibushi”, “Takashi Iizuka’s Retirement ” an announcement about ” KUSHIDA’s contract expiration” was made.

※ KUSHIDA himself was present at the press conference. 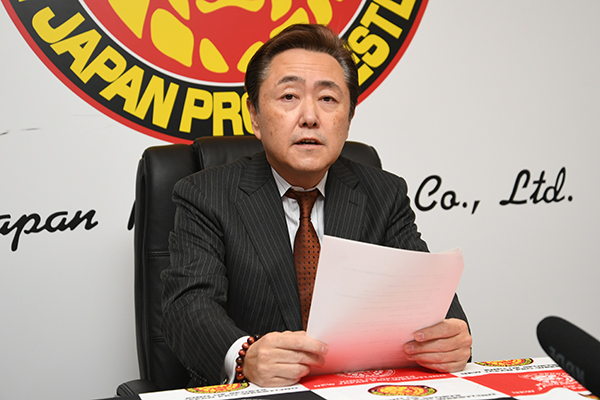 ■ Regarding Kota Ibushi:
“He will miss the next series due to a concussion sustained in the match against Will Osprey at the Tokyo Dome on January 4. The timing of the return is undetermined.” 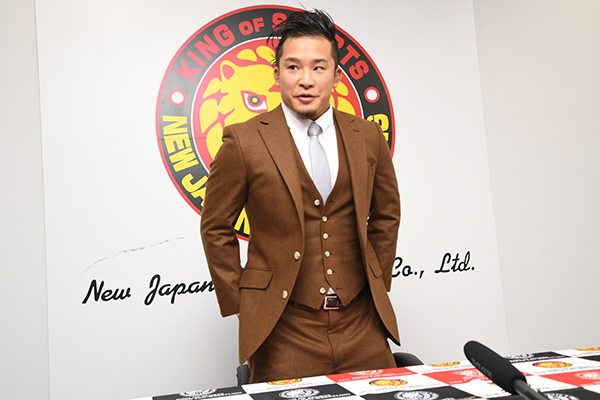 “As mentioned previously by Mr. Sugabayashi, I will leave New Japan Pro-Wrestling at the end of January. Regarding this choice and decision, it was one made with the full co-operation and understanding of Mr. Kidani, Mr. Meij and Mr. Sugabayashi. It was a very big decision in my life and I’m thankful they understood. As for the future, I would like to see the wide world of professional wrestling with my own eyes, from one end of the earth to the other.

I’ve been in NJPW for 8 years now. When I first joined, I was surprised at the scale of this company. This company has allowed me to become a professional wrestler and more than anything I feel that the warm reception and words from the fans has made me who I am today. I really appreciate it. Thank you very much.

So many people are involved in the world of wrestling, from the ring staff to fans, from friends in the locker room to rivals. All these people have helped me to grow as a person and a wrestler. I have so many thoughts and feeling running around my head and I hope to express them in full during the Q&A session. 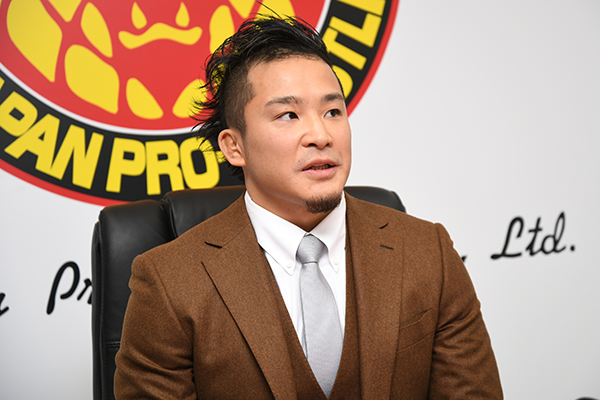 ■ Q & A
– It was announced at the Tokyo Dome on January 4th that the final match of the “BEST OF THE SUPER Jr.” tour will be held at Ryougoku Kokugikan (Sumo Hall), how do you feel about this?

KUSHIDA: Frankly speaking, when I first heard that the finals can be played at Ryougoku Kokugikan this year, I was really happy. A few years ago, I won the “SUPER Jr.” and told everyone “I will take you to a bright future.”

Although I cannot say that the “Bright Future” that I promised is this show in Ryougoku, I also cannot say that “I was the one that brought the Junior Finals to Ryogoku.”If I may once again be frank, the junior division has just increased in stature due to the hard work of a variety of wrestlers. The level of excitement, the energy of the junior wrestlers and the efforts of everyone in this company has contributed to this shift in stature. I’m truly happy about this.

One more thing, the ability to take us to the “Bright Future” I mentioned in that speech, I don’t have that ability in me to achieve this. However, I don’t want you to misunderstand that this sense of nervousness about my ability to be the ringleader for the Junior division is why I made this decision. When I heard about the decision to take the finals to Ryougoku Kokugikan, I felt relief that the NJPW Junior decision will be absolutely fine without me.

– What was the biggest factor in this decision? What do you want to achieve overseas?

KUSHIDA: Since I under contract with New Japan Pro-Wrestling until the end of January, I will not undertake any other negotiations, documents signings, etc., none of that sort of thing at all. I’m only looking forward to my dream of fulfilling my childhood dream of “Becoming a Man of the World.”  I think that I would like to achieve that by fighting overseas.

When I think about the biggest factor, it must be this dream that I’ve held for a very long time. After finally getting into a NJPW and being able to satisfy my hunger as a professional wrestler, I was blessed with a number of good rivals. I got a lot of single matches, a lot of title matches, and I worked hard for myself. I think that I can be proud of my body of work.

A few year years ago, this dream of mine was at the back of my mind. However, I won the “SUPER Jr.” twice and won the championship several times. That’s when I thought “Well, what will happen next?” When I was without a belt last year, I increasingly took on the role of working with the Young Lions, it has been an opportunity to fight together, to learn together as opposed than to simply teaching them how to wrestle.

As you know, I will become 36 years old this year. When I said “Life as a professional wrestler is not so long”, that was about two years ago there are times when I had won belts in both ROH and New Japan. I was coming and going between Japan and the United States.

Specifically, last year I went to the LA Dojo and volunteered at Mr. Shibata’s seminar, I could understand Mr. Shibata’s situation, his injury and his way of life. At the time I thought “Teaching Pro-Wrestling must be quite tough.” Although it was like reading a very difficult to read, thick book, I thought, “I want to read it from cover to cover.” I think my sense of purpose in professional wrestling was re-ignited there, and in particular passing down the torch of Pro-Wrestling to the next generation.

It is in the character of Mr. Shibata, Mr. Liger and Mr. Makabe to bring the atmosphere of the NJPW Dojo  to the next generation. As a result of the system and the sense of commitment from the senior wrestlers, when I thought about my personality or sense of identity, the New Japan dojo is the place that I think had the most impact. It was when I went to the LA Dojo that re-ignited my sense of identity, but it was quite an experience there as well. 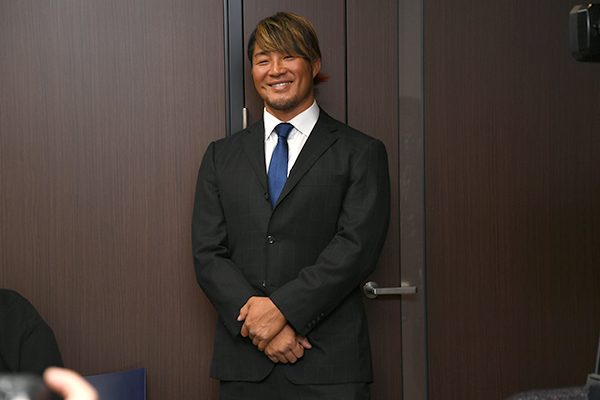 ※ Tanahashi, who was watching the interview from the back of the room, asked: “What was enjoyable with in New Japan Pro-Wrestling and what was painful? Please let me know if there is something.” 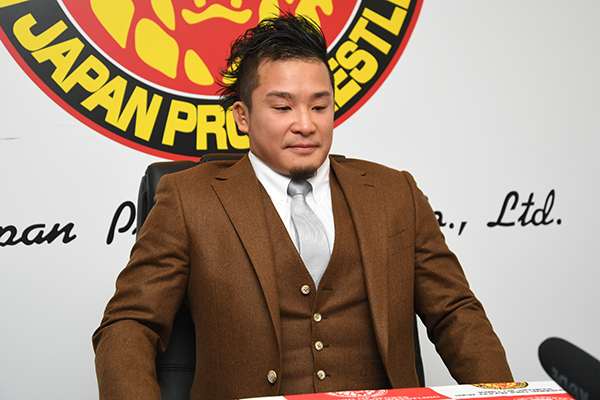 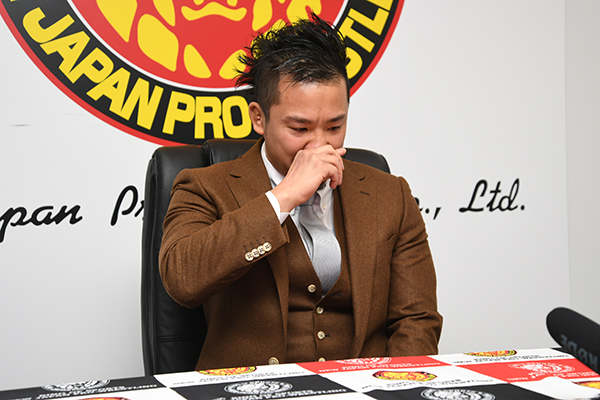 KUSHIDA (*With tears in his eyes*) N…Nothing was painful … …. *sob* … … (*His words quiver*) After all, I …… *sniff*, it’s no good… Mr. Tanahashi, you are mean! (*wiping tears*) After all, I love wrestling, so I can not have a difficult life in professional wrestling, because I even enjoy the difficult times. When I think about it all together, this has been the best environment I’ve been in. Also, there were the fans, it has been a really good year for me as a professional wrestler.

The happiest moment was when I was on a tour bus, I was sat next to  Tanahashi, so I had a lot of fun with my friends… (*cries harder.*) I do not know why these tears keep coming out, but because I made this decision by myself, I do not regret it at all. I do not know why I’m crying because I’m happy with this decision, but I think that I am crying now because it was fun and the best time of my life. Thank you very much. 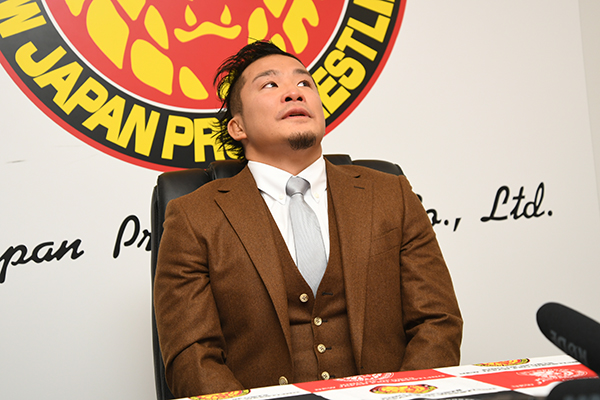 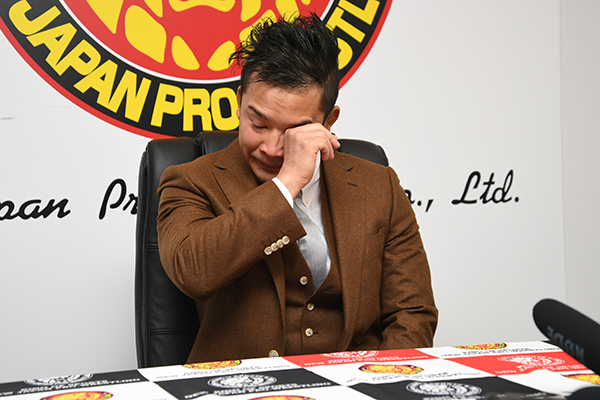 – Your contract  doesn’t run out until the end of January, but is there anything else you’d like to do?

KUSHIDA That’s right. If there is something I haven’t done yet, it would be that I have not quit. I think that I have not taken the decision to retire lightly, but as a wrestler in NJPW’s New Year until January 31 my life as a professional wrestler will be finally complete. In the last 8 years, I was able to become friend with many of the NJPW veterans. Mr. Liger, Mr. Tanahashi, Mr. Shibata, Mr. Makabe, and Mr. Tiger Hattori in particular.

I’ve enjoyed wrestling, how can you not with making friends with veteran like that. Also, the struggle to sell even one ticket, the difficulty of making someone into a Pro-Wrestling fan, greed, politeness. I learned things like that from the seniors and I also developed feelings like “That’s so cool!”, “That’s awesome”, “I want to be like them”. The only one among the veteran mentioned earlier, if there are veterans who I still feel in awe of, well, I guess it has to be Mr. Tanahashi. I hope one day I can be on the same level as him.

※ Finally, a question from Ana-san of Shigeki Shingo, “Which match was your favorite in your 8 year career?”

KUSHIDA It has to be… … (May 3, 2016) The match against the Jyushin Thunder Liger for the IWGP Junior Heavyweight Championship in the Fukuoka International Center. 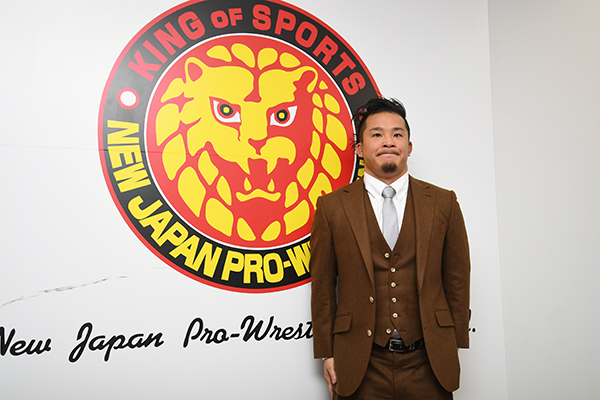