Best of the Super Juniors night 8 at a glance

Night eight of Best of the Super Juniors 26 sees the second of three consecutive nights in Korakuen, and ten more tournament matchups. Here’s what you can expect from the nights action at a glance: 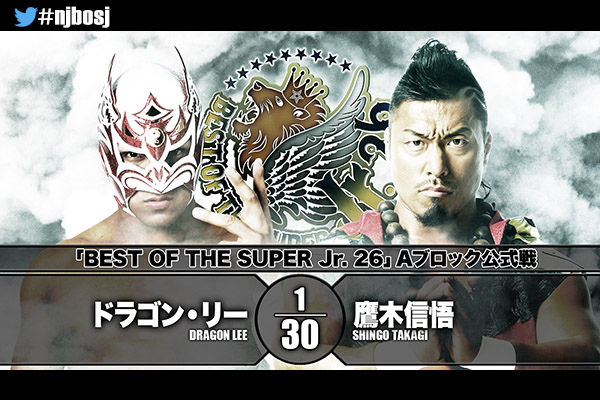 This clash of the dragons was one of the most intriguing matches in the Best of the Super Juniors lineup ever since cards and blocks were announced. In one corner the IWGP Junior Heavyweight Champion, and in the other, the undefeated Takagi. Shingo has been keen to emphasize the differences between the two of them, despite sharing nicknames; Japanese Dragons and Mexican Dragons are by no means the same according to Takagi, and he intends for the ‘Dragon of the Rising Sun’ to come out on top.

Add in the clash of styles between the high flying Lee and the raw power of Takagi and you have one of the most exciting matchups on the entire BOSJ schedule. If Takagi keeps his undefeated streak alive he not only gets closer to booking his ticket to the finals, but beats the IWGP Junior Heavyweight Champ in the process. 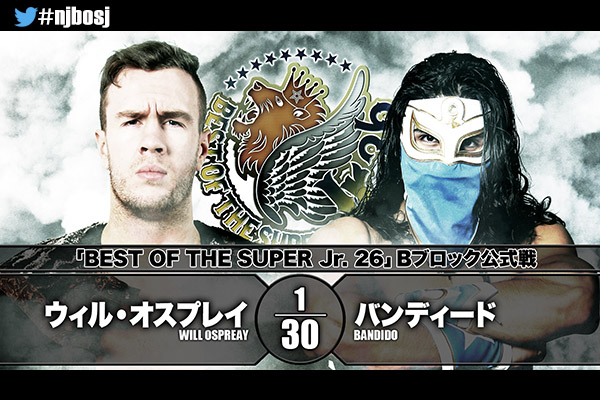 Not to be outdone by the main event, many fans will be anxious to see this clash between Will Ospreay and Bandido: especially if they happened to be in New York in early April. Shortly before both Ospreay and Bandido both took the Madison Square Garden spotlight for G1 Supercard, both men tore the house down in the main event of the WrestleCon Supershow, a match which Ospreay won.

Ospreay has made a point over the last year of augmenting his high flying ability with powerful strikes and feats of strength; a blend that Bandido is well known for. While the main event shows a distinct clash of styles, this semi final will show two prime athletes that mesh together stylistically; a match that will no doubt have Korakuen fans stomping their feet. Who could scoop the win though? Ospreay’s pride will be hurting following his loss to El Phantasmo last night, and his neck will be sore too, while Bandido had a shorter night opposite Ren Narita on Wednesday; albeit one that saw him supleed on the hard apron. From a pure damage standpoint, the edge seems to be with Bandido. 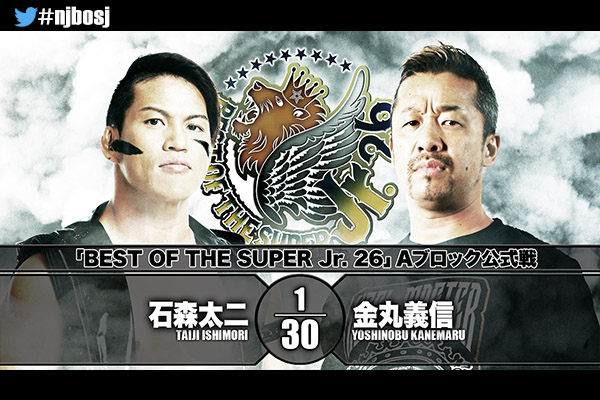 Taiji Ishimori and Yoshinobu Kanemaru’s paths haven’t really met in New Japan, but these two know each other as tag team partners and opponents very well. Extremely well in fact; their history stretches all the way back to 2006 and Ishimori’s first bouts with the Pro Wrestling NOAH promotion. While Ishimori will no doubt claim that he has been reborn since then, their record is by no means in the Bone Soldier’s favour; Kanemaru is in fact undefeated against Ishimori in singles matches with a record of 10-0-1.

Kanemaru is a very prominent pain in Ishimori’s neck as far as career rivalries go then, and its appropriate that Ishimori walks into his second of three Korakuen Hall matches with a sore neck, damaged at the hands of Kanemaru in tag action over the weekend and further weakened by TAKA Michinoku in their match from last night. And if Kanemaru can’t get the job done cleanly, what’s to say he might go for a repeat of his match with SHO and play for the countout? 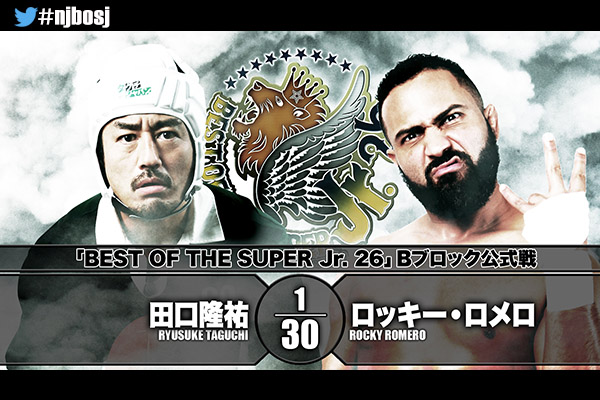 So the Funky Weapon is going into this match with a typical sense of humour and bravado, as will be Romero. Yet there is, doubtless, a lot more at stake for both of these men than they’re letting on. Taguchi had a phenomenal start to the tournament and still maintains an impressive record, while Romero, despite a slower start than he would wish results wise, has put together a string of phenomenal performances that has wowed fans. Expect smiles early, but the chuckles will fade when these two get to business. After all, head coach-ship is at stake. 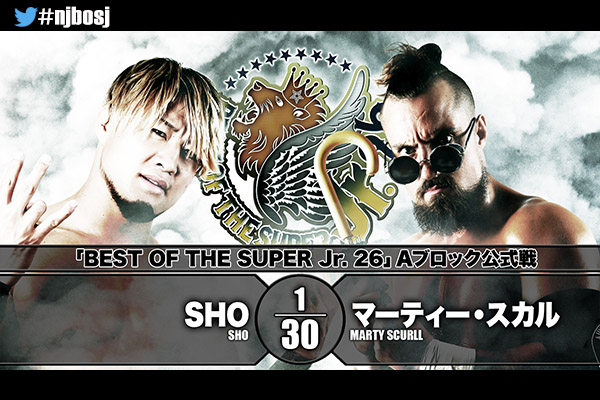 Marty Scurll has been very public about seeking a fourth member for Villain Enterprises during this Best of the Super Juniors tour. You could do much worse than SHO, who has shown he has all the tools for super stardom so far during the tournament and just needs to string together the results to stay in the conversation until June 5.

If anything would stop SHO walking from RPG3K into VE, it would be the old political standby of ‘creative differences’. To whit, their meeting in last year’s BOSJ saw SHO destroy Scurll’s umbrella over his knee before pinning Scurll with a Shock Arrow. With both of these men very much in the hunt at the midway point of the tournament, don’t expect SHO to treat this like a job interview. Scurll meanwhile seems increasingly willing to call on the contributions of Brody King at ringside, and after King nearly won Scurll his match with Shingo Takagi, that might be the go-to here. 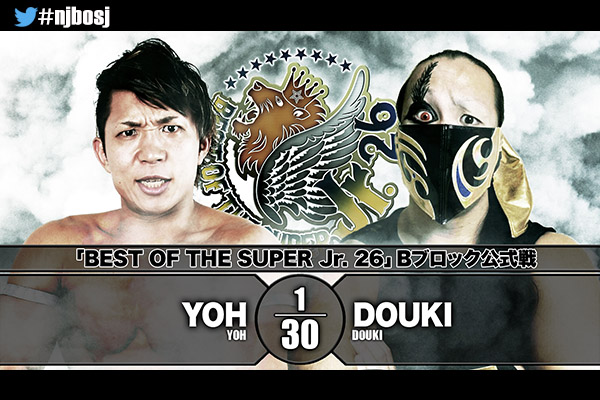 In two matches, DOUKI goes from BUSHI to YOH, two of his most despised opponents in this tournament, and two people that truly embody the ‘hipster lucha’ philosophy that boils his blood so. YOH coming from the NJPW Dojo, through excursions to Mexico and the US, and back home to adulation from fans was a path he work hard to maintain, and one that he struggled on for years. Yet DOUKI feels that YOH didn’t earn his keep to anywhere near the degree that he had to himself in the squalor of the Central American independent space. Expect DOUKI to tear into YOH here, whether that causes him a victory, defeat, or disqualification. 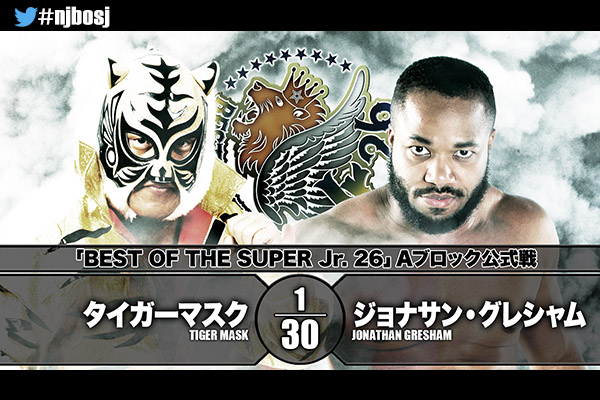 This match should be a technical clinic, as two masters of the mat craft get down to business. Gresham has taken his losses in the tournament thus far with extreme disappointment, but hasn’t let his frustration dampen the enthusiasm and respect he has for each of his matches and opponents. Against the legendary Tiger Mask, that respect goes double, and it may be interesting to see what Gresham doesn’t attack in this bout than what he does. Tiger has suffered from a hurt knee and a hurt hand, but Gresham may choose to avoid those in a gentlemanly spirit that may cost him this match. Or could Gresham’s stretches create more trouble for Tiger Mask, and herald the collapse of his campaign? 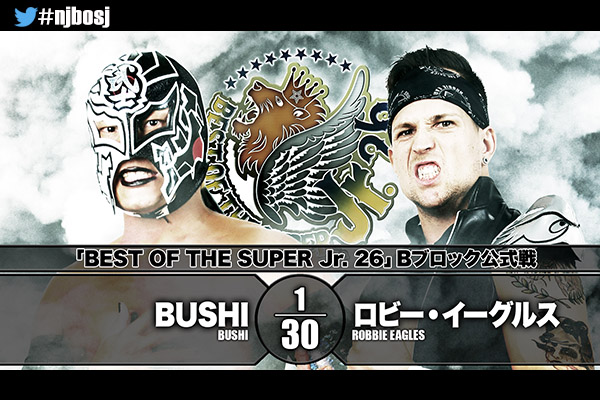 Robbie Eagles faces BUSHI in Korakuen roughly seven months on from their last meeting in the same building; a match in the Super Junior Tag League that he and Taiji Ishimori dropped to BUSHI and Shingo Takagi. It was an MX from BUSHI that signalled the end of the night for Eagles back in October, and the Sniper of the Skies will not have forgotten what did him in. For BUSHI, the chance to continue a resurgence after a slow start to the tournament he won’t give up easily; after all, it’s hard for a sniper to take aim if they have mist sprayed over their sights. 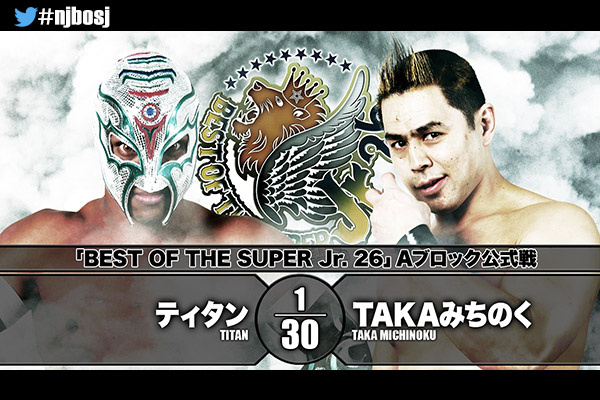 Will anything stop TAKA Michinoku’s slump? Still winless after four bouts, he may well be out of the running by the end of the evening here if he doesn’t get at least two points over Titan. The record books lean at least slightly in Michinoku’s favour perhaps; in three tag team meetings in 2017, Michinoku’s side was up 2-1 over Titan’s, but singles matches are a different matter. You might expect to see Michinoku take a similar tactical route to Kanemaru opposite Titan in the series opener; that night in Sendai, Kanemaru attempted to remove Titan’s mask to upset the CMLL star’s equilibrium and cause more protracted damage, especially to the neck. Michinoku will have a tough time finishing the job though against the all round ability of Titan.

With four losses, just like Michinoku, Narita could also be on the bubble tonight should anybody in B block advance to ten points. Narita has brought fire, fight and heart to every match thus far, but he hasn’t left with any points in return. He’ll be hurting, sore, and facing a Phantasmo in a cockier mood than ever after ELP vanquished Will Ospreay in the main event last night. If Narita can take advantage of that cockiness and deliver the kind of high risk offense he put together with Bandido, we could have the biggest upset in BOSJ history on our hands, but that’s much easier said than done.