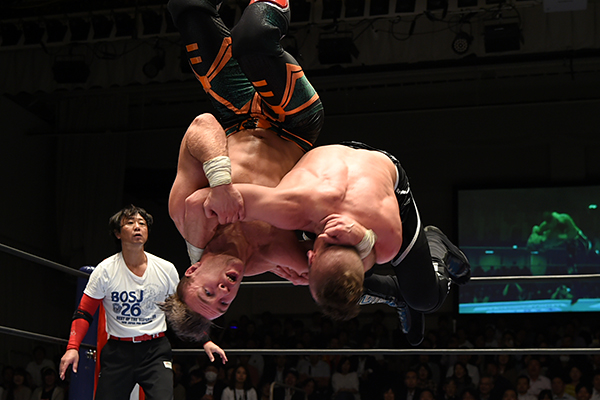 Best of the Super Juniors Night Seven – Results and Report

Korakuen hall is called the “holy place of pro-wrestling” in Japan for good reason. Any competitor who enters this hallowed hall has the full potential to grasp their destiny and become a legend. Thus it was that it seemed like every match in this night of the Best of the Super Juniors showed the full fighting spirit of every competitors, and whilst some went home disappointed, each match was sublime and all wrestlers were able to go back to their hotel with their heads held high.

Check out the full results here 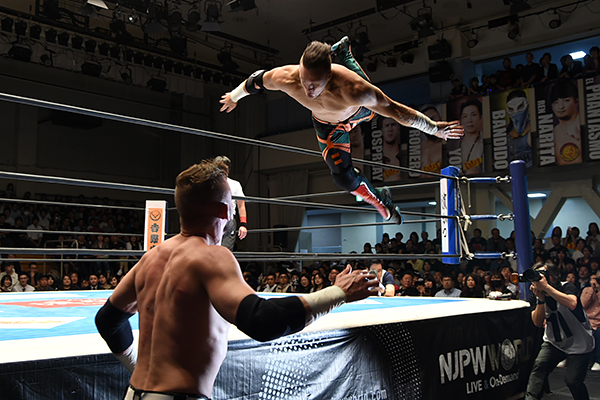 The two men may have started the year as firm friends, but the malign influence of Jay White’s cut-throat BULLET CLUB has turned Phantasmo into a much more malicious creature. The weight of history and the sudden withering of what once was a firm friendship, gave a sense of importance to this match above and beyond most BOSJ matches. Immediately Ospreay went into a drop kick, sending Phantasmo careening into the crowd. Phantasmo tried to escape but Ospreay’s anger was not to be denied. Ospreay took Phantasmo into the crowd but it proved to be his undoing. After sending Ospreay tumbling down the Korakuen steps and moonsaulting him from the balcony, Phantasmo was able to take the offensive thanks to the some extra liquid courage from an unassuming fan’s beer. From then Phantasmo had Ospreay in the palm of his hand until around the 9-min mark, when Ospreay was able to stage a come-back.

Ospreay’s conditioning and training allowed him to withstand the blistering offense and by the 15-min mark, a Robertson special and a shooting star press seemed to seal the match, but Phantasmo was unwilling to stay down. Successfully countering each other time and again, the two went back and forth, the relationship between the two meaning that the each wrestler seemed to have a sense of foresight as to their opponent’s next move. At the 20th minute, Phantasmo spat in Ospreay’s face, seemingly triggering a switch in the Aerial Assassin, whereby a brace of vicious kicks preceded an OsCutter, which was blocked at the last second by Phantasmo. The two moved to the ring apron where Ospreay threatened some truly dangerous offense, but once again, Phantasmo successfully countered it. A liger bomb at 25 minutes seemed to herald the end and in desperation, Phantasmo lashed out at referee Red Shoes Unno, who later attempted to help Ospreay pull off his Storm Breaker finishing move. Finally though, BULLET CLUB prevailed and Phantasmo was able to pull-off his Storm Breaker. 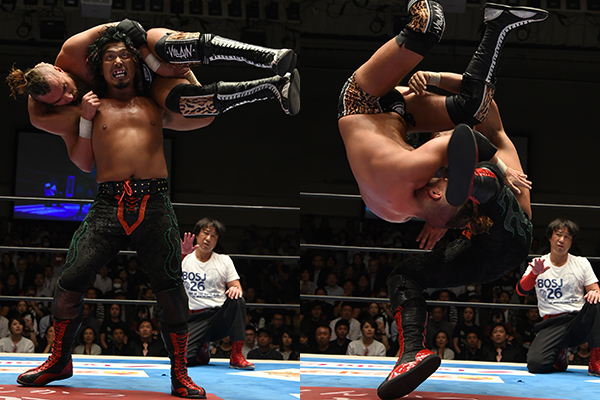 Whilst Scurll may have faced some tricky opponents so far, he must have been coming into the match with a sense of dread. At 96kg at the time of his last weigh-in, Shingo Takagi is unique amongst his peers in that his power and strength are equal to that of any heavyweight, let along a junior. Scurll though, has always been able to rely on his cunning to emerge victorious and naturally he came out swinging, hoping to seize the initiative. Takagi’s 8-month streak of going un-pinned in New Japan and given him a sense of cocky self-confidence, even arrogance and the ever crafty Scurll hoped to turn this to his advantage. Vicious and brutal, Scurll’s offensive managed to not only stagger Takagi, but utterly undermined his self-confidence.

Scurll was essentially on the offensive for the entire match, as strike after strike landed on the dragon, but even after a super-plex there was no putting down Takagi. Scurll had to employ the talents of his ring valet, Brody King, to try and leverage a sense of advantage over the bigger man, but Takagi just kept standing up, displaying the endurance and tenacity that is Takagi’s defining advantage. Takagi was ultimately able to turn the tables and finish the match and retained the purity of his streak. 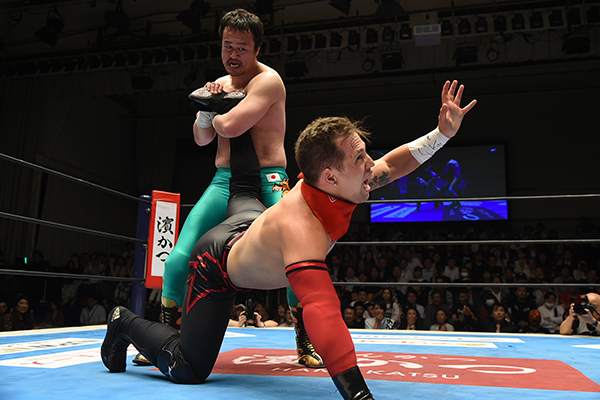 The funky weapon winning his opening three matches may have surprised some NJPW fans who know Taguchi more for his cheeky antics, but the two-time IWGP Jr. Heavyweight champion came into the tournament determined to win. Whilst, his debuting opponent also had something to prove, it was Taguchi who started the match largely in control. Eventually though it was Eagles who tactically isolated Taguchi’s extremities, bringing the match back to parity. By the 5 minute mark, it was clear that Eagles had an answer for everything Taguchi was throwing at hi,. kicking him right in his funky weapon while he was setting-up for a Bomb-a-ye. At one point, Eagles managed to transition from a roll-up into a figure-4 leg lock in a display of wrestling nouse. The match heated-up even more as Taguchi started getting serious. Eagles survived a devastating Dodon and, pulling everything out of his arsenal, finished the match in a technical fashion. 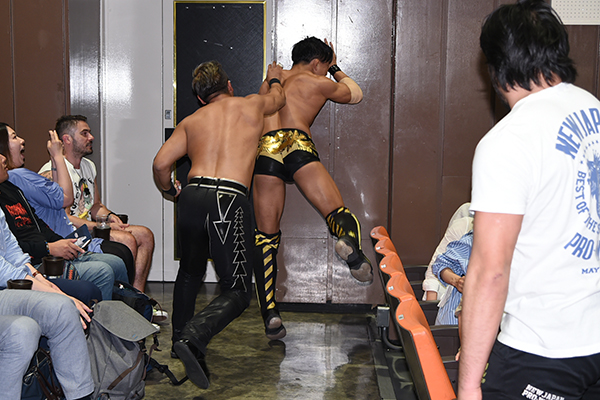 Having gone back and forth in the tag-team division for over a year, the two had never faced each other in a singles match. Kanemaru immediately took the fight to SHO early, grabbing him by his injured ear and lead him up the legendary Korakuen Hall steps into the crowd. He delayed SHO long enough that after a masterful use of an oblivious Yota Tsuji, he knocked SHO down long enough to slip into the ring and force a count-out, devastating a distraught SHO. 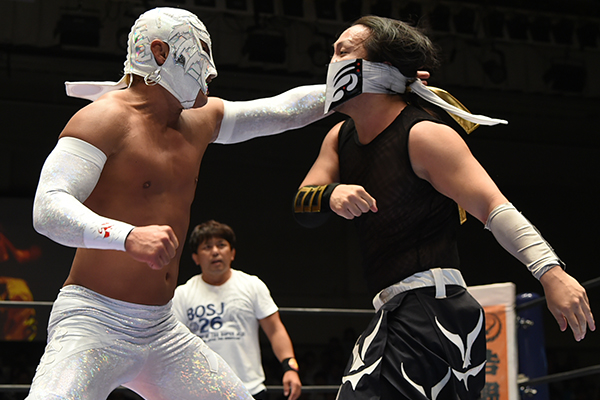 For DOUKI, this match was about more than victory or defeat, it was about sending a message to all of what he considers to be ‘poser Japanese luchadores’ (BUSHI being perhaps number one on his list). The match was set to be violent but none had quite expecting the level of brutality that both wrestlers displayed. DOUKI in particular was especially brutal, attacking the referee Marty Asami at the 5-minute mark. BUSHI however, was in no mood to lie down and gave as good as he got, needing as he did, a win to stay competitive. After a vicious period of offense, BUSHI pulled-off a flawless MS on a shocked DOUKI. 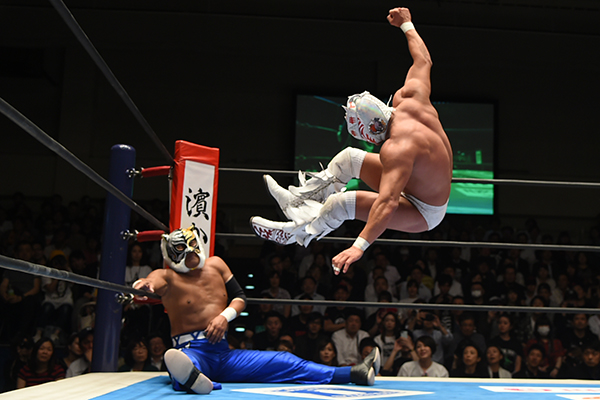 Although it is not known in which year Tiger Mask was born, he is definitely one of the more experienced competitors in the junior division. He came out to Korakuen looking to put the young champion in his place, putting on his best performance of the year so far. Lee for his part was undeterred. Despite a sustained period of offense from Tiger Mask, Lee was able to put the veteran away quite comfortably, displaying why exactly he was champion. 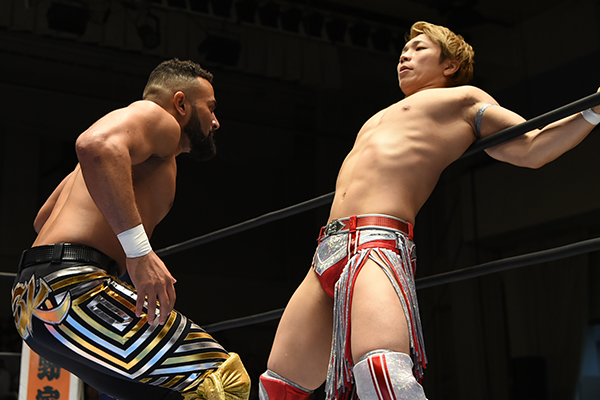 When Rocky Romero accepted his invitation to join the field for Best of the Super Juniors 26, he did so alongside his two young prodigies, SHO & YOH. Once the blocks were announced however, it would be clear that Romero & YOH would be facing each other in what must be a bittersweet match for the pair. However, to be crowned as Best of the Super Juniors is a prize that is too great to get overly sentimental about relationships and so YOH and Romero, begrudgingly put aside their friendship temporarily. Despite some inital tepidation and hesitation, instinct won out and both wrestlers were able to take the fight to their stable-mate. YOH employed a pair of dragon screws, just as he did against Ospreay. Romero transitioned a characteristically strong calf-crusher into a cross arm-breaker, a technique he’d picked up from his own mentors, such as Antonio Inoki. There was no sign, however of the “king of Sneaky-style,” instead as the match wore on, it was YOH who channelled his mentor and was able to transition a period of particularly vicious offense into a submission from Romero. 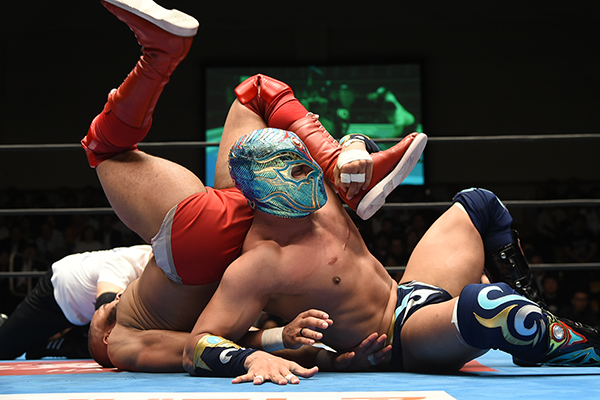 Whilst neither wrestler came into the match suffering the indignity of being points-less, each must have felt the pressure of needing the win to remain competitive in the points totals. Titán proved incredibly versatile and was able to match Gresham in his grappling ability and add to it his own lucha flavour. Gresham, however, was not a 1-trick pony, and dazzled the crowd with his speed, even surprising Titán with a La Mistica. The two traded roll-ups and near-falls on a near constant basis and it was almost at the point where it could have finished in a split-second in either wrestler’s favour. Eventually, Gresham was able to leverage his experience in submission-holds to trap Titán in an Octopus clutch, pulling him to the floor and tapping him out. 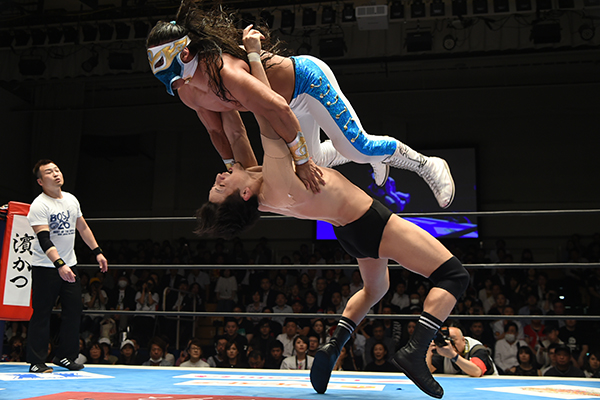 Although rare for a Young Lion to be able to have the experience to be able to keep up with the regular competitors in a tournament, Narita’s skills and abilities gave him a good chance. Bandido came out with something to prove and whilst Narita was able to keep up with him step for step within the first 5 minutes, the tides seemed to turn when Narita was unable to keep hold of his front-bridging suplex. Having finally succeeded in pulling-off his 21-plex finisher the previous night, Bandido was able to overwhelm the Young Lion. With a combined age of 44 years old, the future of the junior division looks very bright indeed if the two wrestlers are able to build on their success. 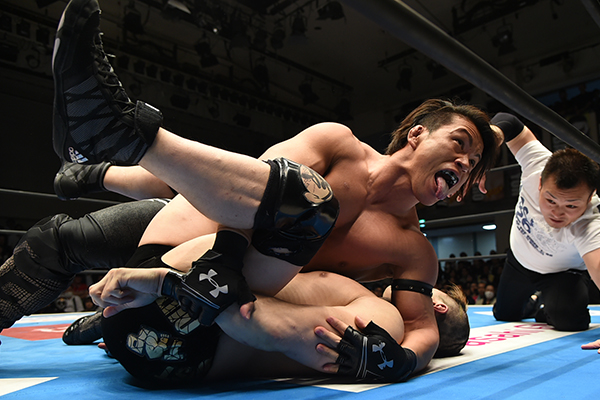 Ishimori came into the match as the firm favourite, being as he was undefeated, whereas TAKA came in without a single victory to his name. Michinoku came out very strong and was able to make use of multiple submission holds to make this match a real challenge for the former champion. Ultimately though as soon as Ishimori was able to mount his first real offense it proved too much for him and the match was over relatively quickly.