The breadth and depth of the NJPW World archives is truly tremendous, but sometimes it might be hard to know where to start. Every week on njpw1972.com, we take you back through the archives to give some background to the classics. 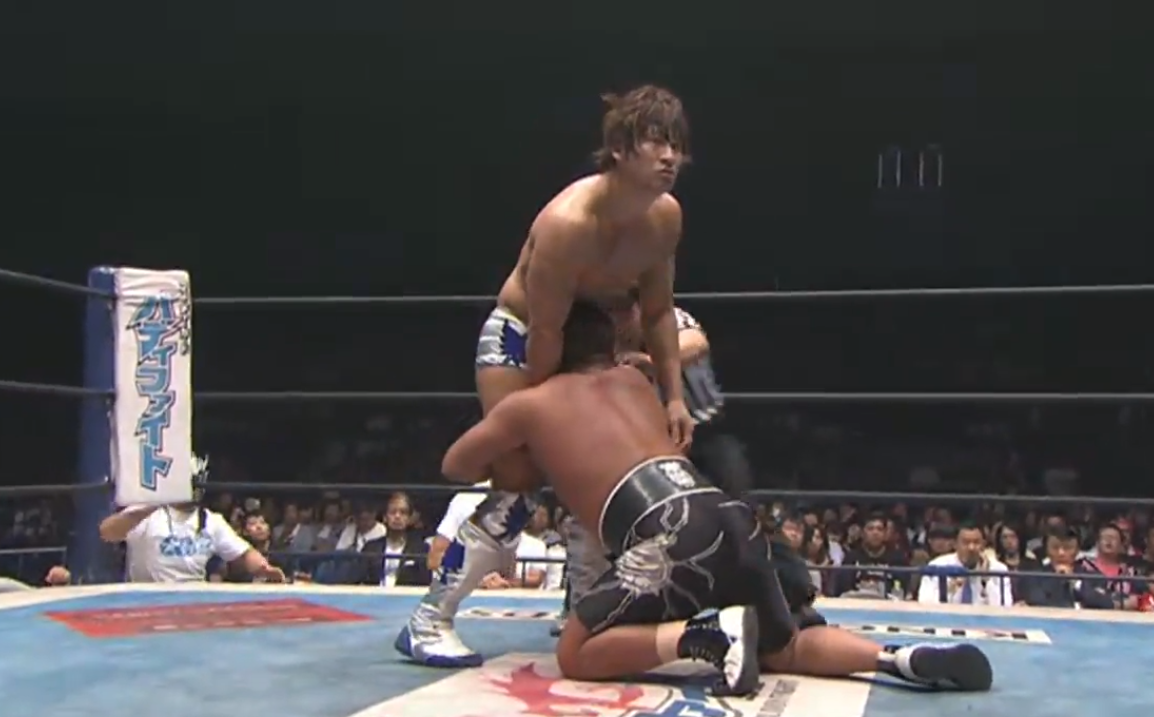 Much has been written about the similarities between Kota Ibushi and Will Ospreay. Ospreay was a huge fan of Ibushi’s as he came up through the UK independent scene to join NJPW, and his match against the Golden Star at Wrestle Kingdom 13 was the realisation of a dream for Ospreay.

That bout was fought over the NEVER Openweight Championship, the heavyweight Ibushi tackling the junior Ospreay in a match the Briton would win. It’s been relatively rare for the Openweight championship to be defended across weight classes, but that was a challenge Tomohiro Ishii would readily accept as NEVER champion in 2014. Ishii would choose to alternate between accepting heavyweight and junior challengers; after winning the title in February he defended against Tetsuya Naito, and then KUSHIDA in Taiwan before facing Tomoaki Honma, and here in Yokohama, Kota Ibushi.

Ibushi was in the midst of an intense period. He was contracted to both NJPW and the DDT promotion at the time, with a full schedule for both promotions. He was also IWGP Junior Heavyweight Champion, in the middle of a reign that had already seen tough matches against Prince Devitt, El Desperado, Nick Jackson and Ryusuke Taguchi. He was burning the candle at both ends to prove himself worthy of competing in a New Japan ring, and to do so with heavyweights like Ishii. A lot can be seen in the gritted teeth and furious strikes of Ibushi here (drawing blood from a stone pitbull on one exchange), that brought him success and the Intercontinental Championship in 2019, and Ishii is, as ever, a fearsome, snarling beast in this match. 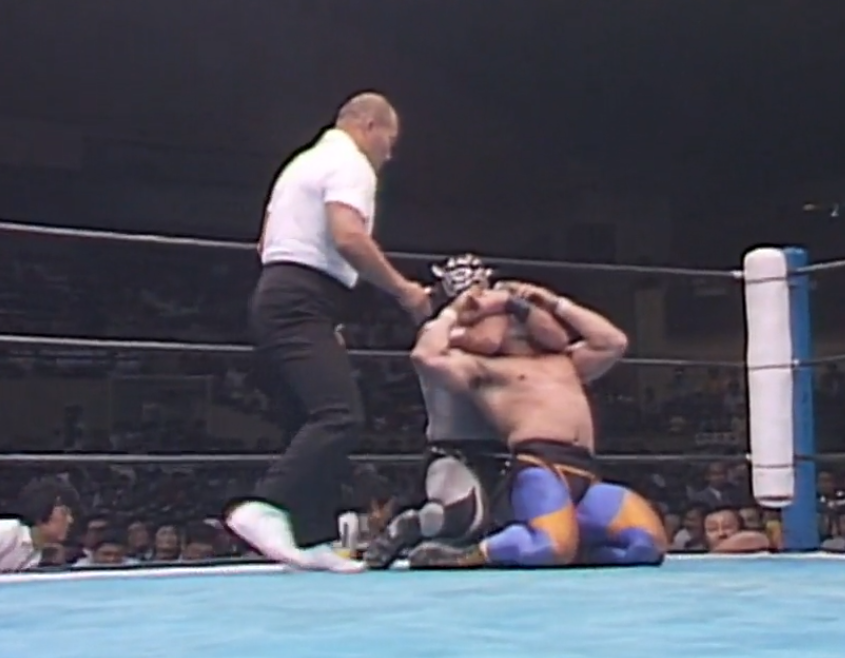 Tiger Mask first met his dark counterpart in April of 1982. The excitement of a comic book rivalry brought to life before the fans’ eyes was instant and electric, but the first match ended on a sour, non-finish note. More controversy struck over the coming weeks; Tiger Mask suffered an injury in an ensuing tag match that was thought to be severe. That led to him relinquishing the WWF Junior Heavyweight Championship, a title Black Tiger would win by defeating Gran Hamada on May 6.

Tiger Mask would soon make his return however, and the door was open for a second go around. Tiger Mask versus Black Tiger 2 was set for May 26 in Osaka. While Tiger Mask had spent the majority of the prior year wrestling top masked prospects from Mexico, Black Tiger offered something different, a British flavour shared with Tiger’s other rival Dynamite Kid. There’s a blend of athletic beauty and violent hate behind this match that’s hard to tear oneself away from. 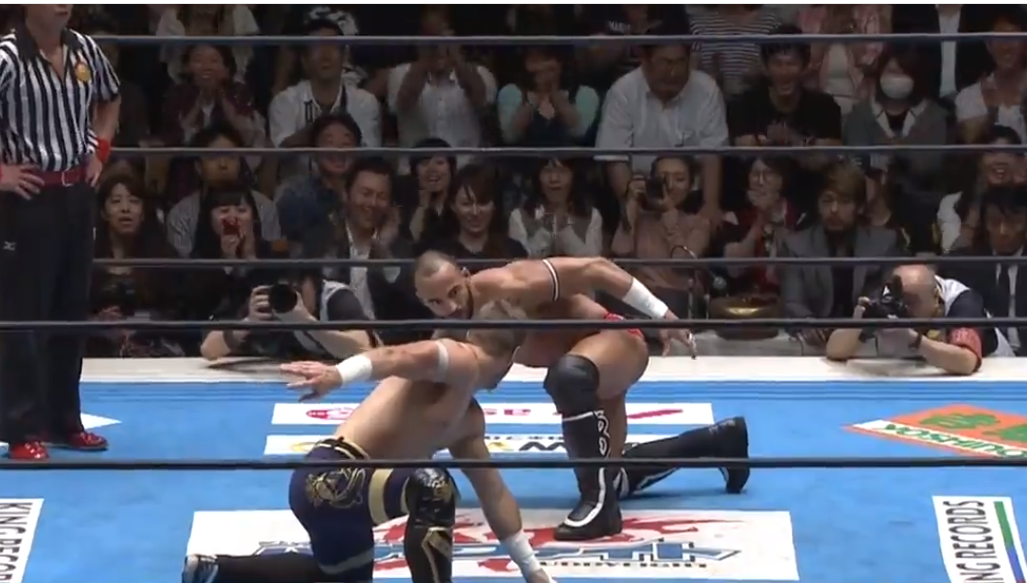 Many had May 27 circled on their calendars when the Best of the Super Juniors 23 cards were unveiled. Ricochet was the 2014 BOSJ winner, and in the eyes of many, the world’s premier high flier. Opposite him would be Will Ospreay, the young Briton with a lot of buzz, who had joined New Japan in the spring and instantly came within a hair of the IWGP Junior Heavyweight Championship. The anticipation in Korakuen Hall was palpable, but nobody could anticipate just how much 16 minutes and 50 seconds of action would transform the wrestling world.

It was controversial, it was thrilling, it was beautiful and it made worldwide stars of both. It’s probably easier just to watch it. 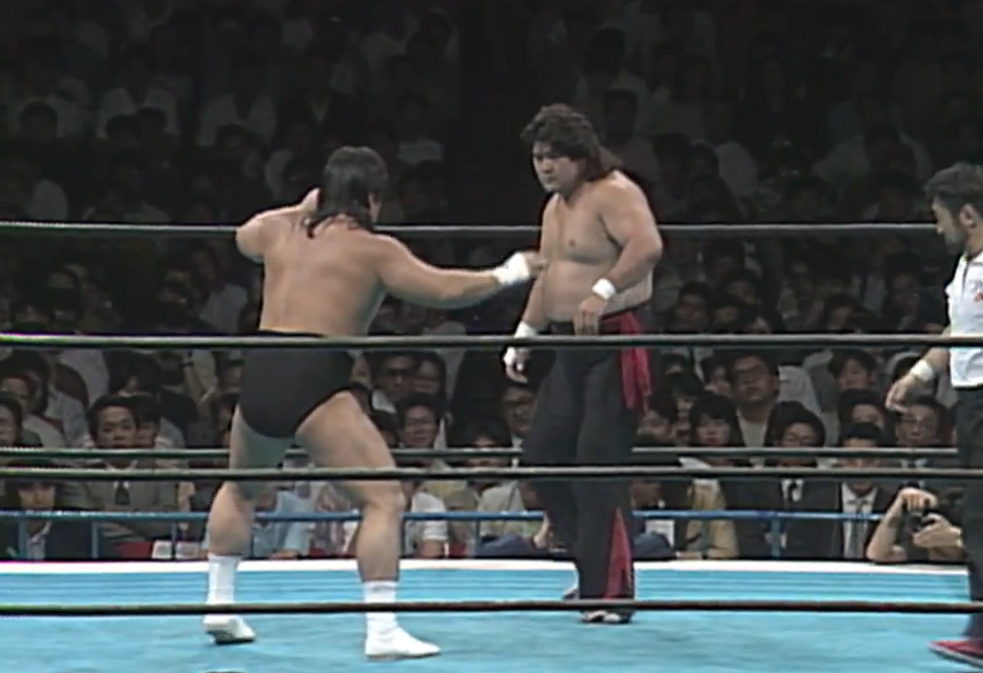 Riki Choshu and Shinya Hashimoto had a complex and very often antagonistic relationship. While years on, Choshu would publicly reflect that of all three of the musketeers, comprised of Hashimoto, Masahiro Chono and Keiji Muto, Hashimoto had the most ability. Yet from Hashimoto’s time as a young lion, the younger man harboured a violent distaste toward Choshu, and ill will would see their matches spill into hard hitting violence through the 1990s and into the 2000s before Hashimoto’s untimely passing in 2005.

In 1990, this Osaka battle was a vital one for Hashimoto.  Choshu had seen the rise of the three musketeers and set himself, along with his contemporary and rival Tatsumi Fujinami as the gatekeepers to the main event kingdom. ‘The future may be yours,’ he would say ‘but don’t rush it, because we’re still in charge for now.’ To prove his point, Choshu would enter three big singles matches on the May 1990 Clash the Super Heavy tour, against each of the musketeers in turn. Choshu had already defeated Muto and Chono by the 28th, meaning Hashimoto had the burden of the new generation’s hopes on his shoulders, as well as the knowledge he could win; he held a 1-1 record with Choshu, with his win coming in the Tokyo Dome the prior year in under four minutes. ‘How I win doesn’t matter,’ were Hashimoto’s pre-match thoughts, ‘I just have to win.’ 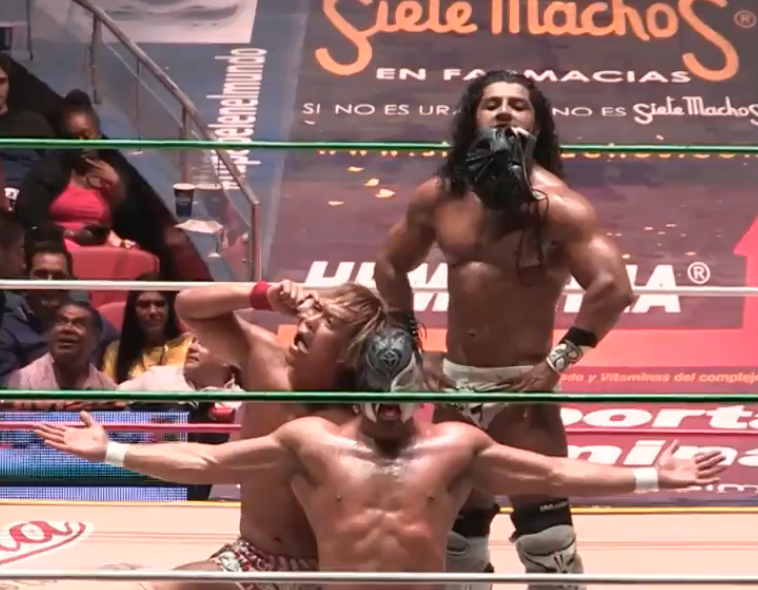 As late May and early June sees lineups dominated by the junior heavyweights, it’s not entirely unusual for heavyweight wrestlers to either rest up and prepare their bodies for the rigour of the upcoming G1 Climax, or to head overseas to face new challenges on excursion.

In 205, Naito made the trip to Mexico in a strange mental state. The ghosts of the prior year clearly haunted the ‘Stardust Genius’; after winning the G1 in 2013, his Wrestle Kingdom IWGP Heavyweight Championship match with Kazuchika Okada was voted down to semi main event status while Hiroshi Tanahashi and Shinsuke Nakamura topped the Tokyo Dome card. A month later, Naito would lose the NEVER Openweight Championship to Tomohiro Ishii, in a match that saw him booed out of the Osaka building.

Naito continued to have an uninspired 2014, and started the net year in losing form, falling to AJ Styles at Wrestle Kingdom 9. He was struggling to stay in the conversation when it came to the NJPW main event scene, but Mexico would change him. Falling in with Rush and La Sombra, naito joined Los Ingobernables, an amoral league of misfits who fell out of the usual rudo and tecnico paradigms. When he returned to Japan in June, it was with an all new attitude, and the impetus to start a movement. 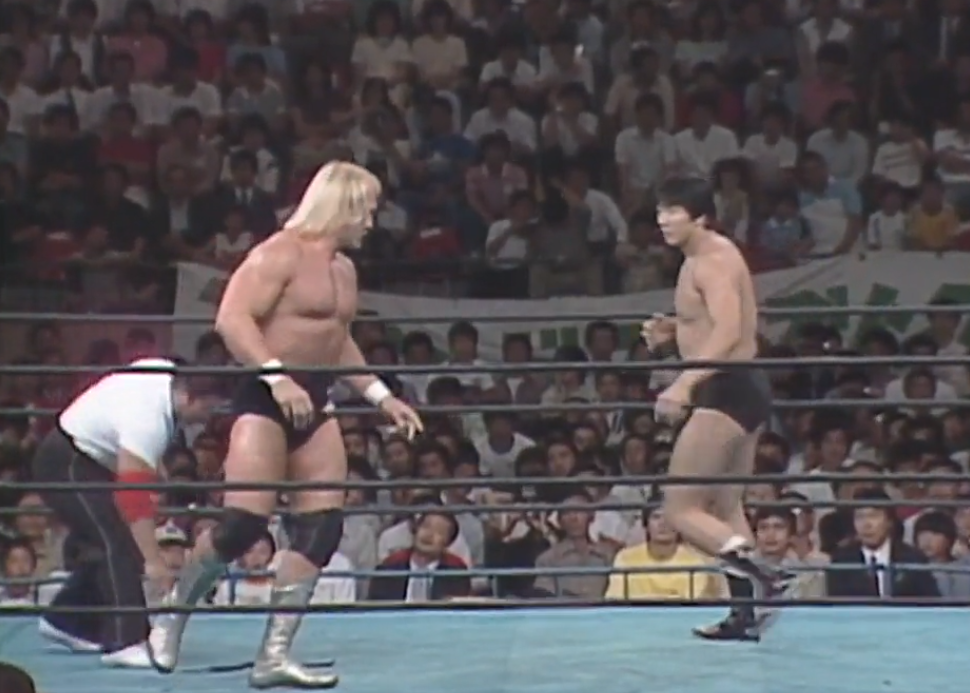 While Best of the Super Juniors is in full swing in 2019, back in the 1980s it was time for the top heavyweight tournament in NJPW. The World League and MSG series had taken place in prior years, but 1983 saw the birth of a new tournament.

The IWGP (International Wrestling Grand Prix) League was a unique tournament designed to crown the IWGP Heavyweight Champion. This title and its associated belt was not a regularly defended championship; rather its winner would hold the title for a year, and defend it against the winner of the net year’s tournament.

As the IWGP name suggested, there was an international flavour to the tournament. It would take the form of a single block league, with participants representing Asia, the US specifically and continental North America as a whole, Central and South America, and Europe.

Hogan, naturally, represented the US, the giant blonde American quickly gaining favour from Japanese fans as ‘Ichiban Hogan-san’. His young opponent here, oddly was a European entrant to the league. Akira Maeda was a hot Dojo prospect who had been sent to Calgary’s Stampede on excursion, before touring Europe on his way back to Japan; winning the European Heavyweight Championship on his prior tour made him an honorary European citizen as far as the IWGP was concerned.

The young Maeda had a lot of hype behind him, but wasn’t expected to go too far in the league; he sat on seven points going into this bout while Hogan was on 14 (this when tournaments had a unique approach to scoring in NJPW; pinfall wins were worth five points, DQ or countout victories only 4 and a non contest could award 2 points to either side).

What made this match intriguing, though, was the clash of styles involves. Maeda was already showing the striking and submission acumen that would make him a pioneer in the field of mixed martial arts, while Hogan would look to out muscle the young prospect and land his Ax Bomber. 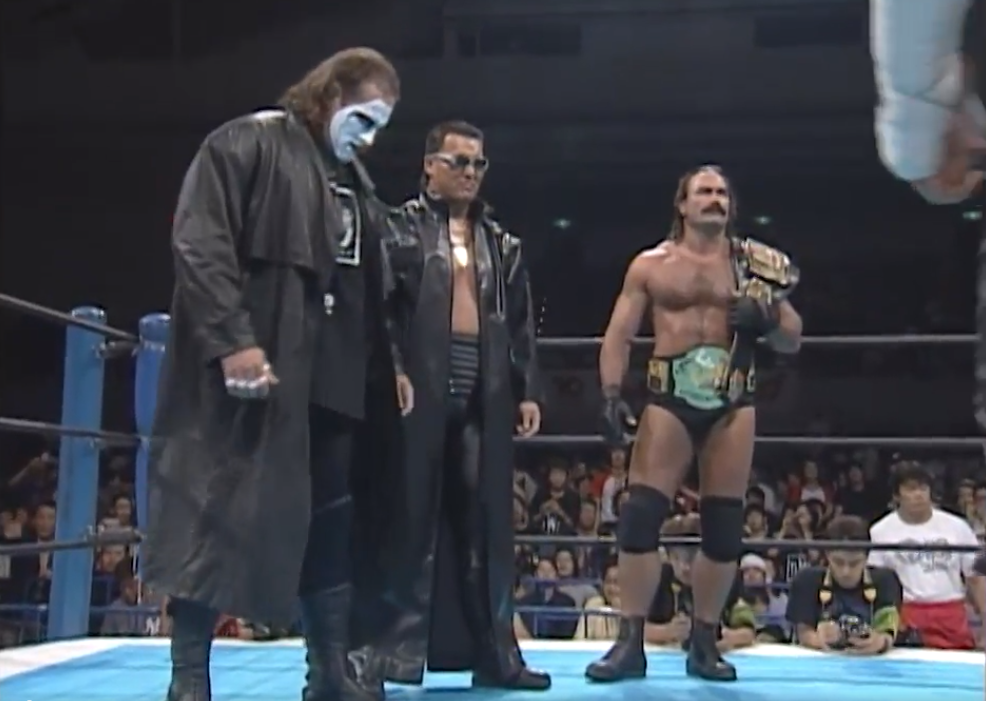 It is quite possible that without the pioneering work and popularity of Mashiro Chono and nWo Japan, Tetsuya Naito and Los Ingobernables De Japon may not have been birthed in Mexico in 2015. When Chono rolled his Okami Gundan stablemates into the Japanese wing of the New World Order, he started a phenomenon and cemented his legacy.

Yet Chono was the focus of international wrestling attention without its richest prize. He would seize the IWGP Heavyweight Championship, at the peak of nWo Japan popularity, in the summer of 1998, but his reign wouldn’t last long. Chono had been carrying a serious neck injury for years, and had no choice but to relinquish the title and take a significant period of time away from the ring. He would never hold IWGP heavyweight gold again, but that wasn’t all, as Chono began to lose grip of his monolithic faction.

After a lot of speculation, Keiji Muto would join nWo Japan in 1997, and filled the role of faction leader when Chono was away. While his Great Muta persona was purest evil, for the most part Keiji Muto didn’t have quite the black heart of Chono. His immense popularity and just mindset would see an antagonistic group become fan favourites with Muto at the helm, and Hiroyoshi Tenzan and Satoshi Kojima forming a formidable tag team underneath. When Chono came back, he wanted to reverse what he saw as a coup d’etat, and would recruit UFC great Don Frye, and Chono loyalist Jeff Farmer (the nWo’s version of Sting) to his cause. The result was an intense fight for the nWo’s future.