Best of the Super Juniors Night 12 results and report

Osaka saw night 12 of Best of the Super Juniors 26, a critical night of group action with five matches that each contained contenders for the top spot of the group. 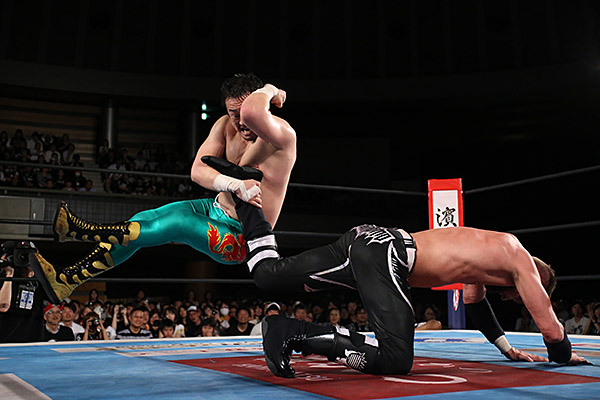 ELP started the match by dropkicking Taguchi’s rugby ball into the stands; the kick was good, but it brought out the violent best in Taguchi. The two would settle into mat exchanges, with Taguchi on top for the most part, but when ELP countered Taguchi into a series of criss cosses, Taguchi lacked the cardio to keep up.

The one-upmanship continued as ELP landed his mocking rope walk rana, but when Taguchi tried the same move, he wound up making a very uncomfortable landing on the top rope. The nether regions would continue to be a focal point of offense for ELP, but Taguchi would gain some momentum with hip attacks and a suplex exchange and Apollo55 style no touch tope con giro. ELP would then hit a huge moonsault on the floor, but hurt his knee in the process.

As Taguchi looked to capitalize, Robbie Eagles found his way to ringside. A Bummer Ye by Taguchi was followed by Dodon To The Throne for a two count. When Taguchi looked to go up high, ELP tried to counter with a top rope Enzuigiri, but he fell into Oh My and Garankle. A second Dodon transitioned into the hold, and ELP tapped out, giving Taguchi the win and making Taguchi versus Ospreay on June 2 the decisive B block match.

Eighth Match: Will Ospreay defeated DOUKI via pinfall to move to 12 points. 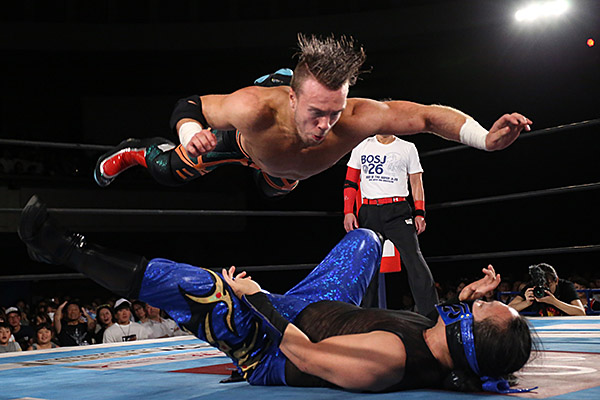 DOUKI tried to get the drop on Ospreay, but was quickly countered, with Ospreay launching himself to the floor to take out both the luchador and Taichi sitting at ringside. It seemed as if it would be a one on one match, but when DOUKI landed a huge dive of his own to the floor, Taichi would get revenge with a steel chair in hand. That allowed DOUKI to go to work on Ospreay’s mid section in ring, including restricting the Briton’s airways with the Italian Stretch.

DOUKI threatened hard, landing a big lariat as Ospreay gained momentum. Ospreay powered through however, landing a huge Shooting Star to a DOUKI draped over the ropes. That led to a hook kick and then a Stormbreaker attempt, but DOUKI landed a huge hurricanrana to counter for a nearfall. DOUKI would try for Suplex De La Luna, but Ospreay would counter; this prompted Taichi to get on the apron and distract the referee long enough for DOUKI to drive his iron pipe into Ospreay’s ribs. This still wasn’t enough to stop Ospreay, who hit the HiddenBlade and finally Stormbreaker to move into pole position in the block. 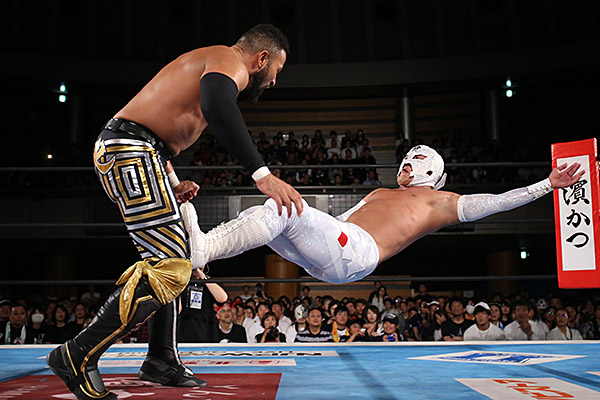 Rocky Romero harkened back to his days as Black Tiger for his entrance, a ploy that allowed him to mist BUSHI in the face and dive to the floor in the early going. Rocky was impressive with some kicks to BUSHI’s arm and a one man Strong Zero, but when it came to trading chops and rewind kicks, BUSHI came out on top. BUSHI landed his missile dropkick, and followed soon after with an MX to move to ten points. 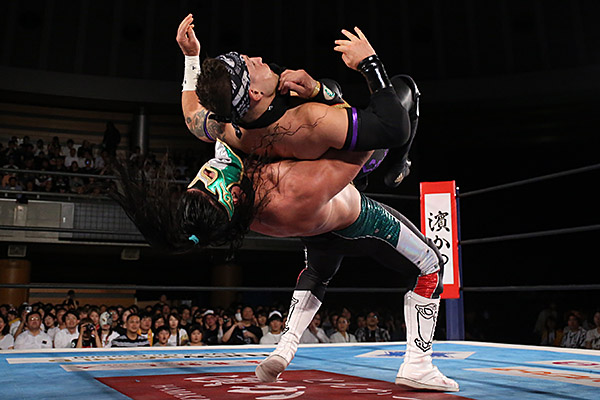 In a high impact bout, Eagles dealt a lot of damage early, delivering a backdrop throw to Bandido on the entrance ramp. In ring, Eagles showed impressive strength lifting Bandido and then delivering a series of kicks but was countered by a Snapdragon by Bandido. A follow up 21Plex attempt resulted in a poison rana distraction, but when Eagles tried to land a 450 to Bandido’s knee, it was Bandido’s knee to the midsection that led to a near fall. Eventually, both men found themselves on the top rope where a reverse Guerrero Moonsault got Bandido the win and put Eagles in a difficult spot in the tournament. 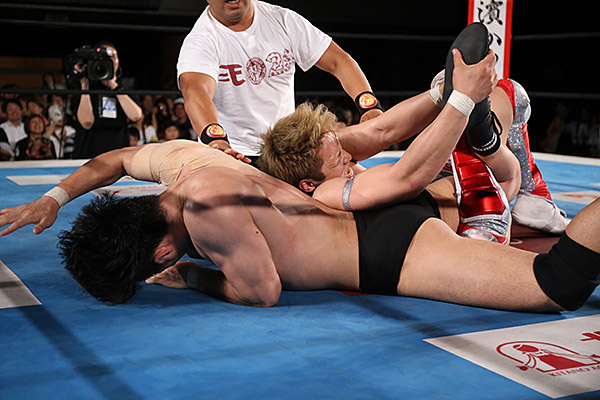 Leg work has been the key for YOH in many matches during the BOSJ and again paid dividends. Narita would try to gain momentum but was stopped by the stronger YOH. Narita would try to hit the high Gable grip suplex from the top rope but was shaken off by YOH. Back in ring, Narita came close with a German suple and a Boston leglace, but was rolled into YOH’s Stargazer submission for the tapout, keeping YOH alive in the tournament. 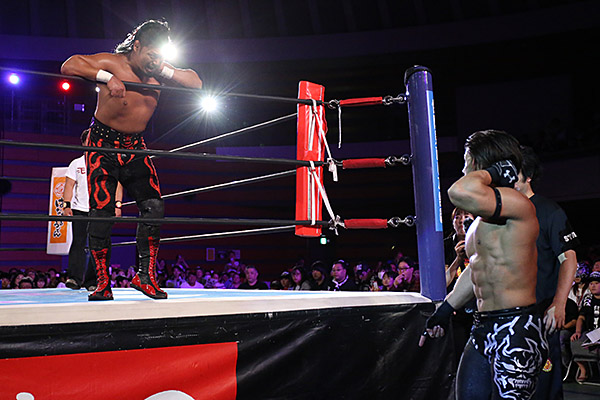 Takagi and Ishimori got into some spirited exchanges ahead of their crucial block deciding match on Friday, but it was Naito who scooped the win with a flash pin. 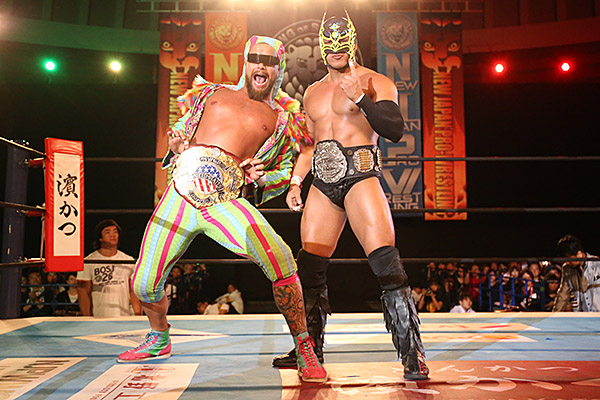 Robinson was full of confidence ahead of next week’s title match with Jon Moxley, hitting an emphatic Pulp Friction to win. 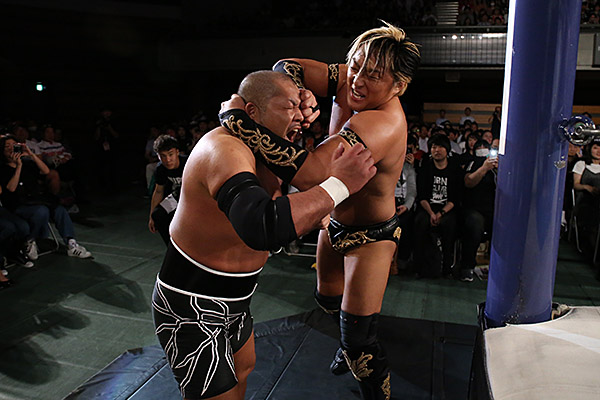 As Taichi took to Ishii on the floor, locking in Seitei Jujiro on his championship opponent for Dominion, Kanemaru landed Deep Impact in ring to stand tall. 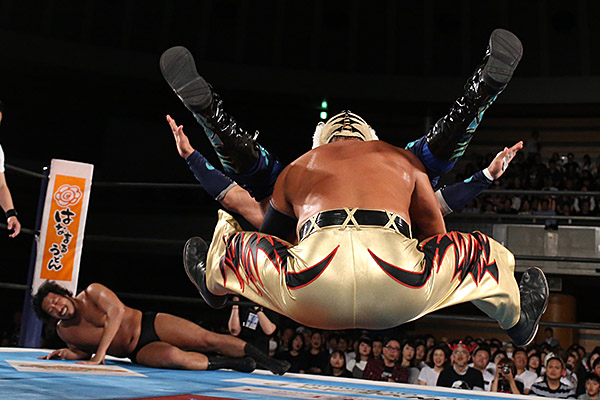 Tsuji looked to take out the biggest opponent on the opposite side, but instead was on the receiving end of a TOA Bottom from Henare.