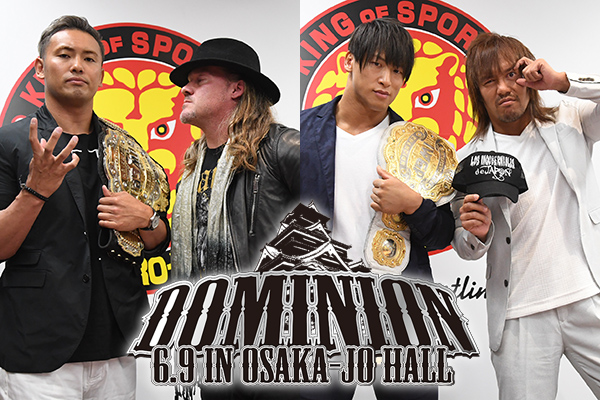 Tense and fiery press conference ahead of Dominion 6.9!

In front of a packed press conference room, the eyes of the world were on New Japan Pro-Wrestling.

The first of two press conferences was with the IWGP Intercontinental Champion, Kota Ibushi and his challenger Tetsuya Naito. 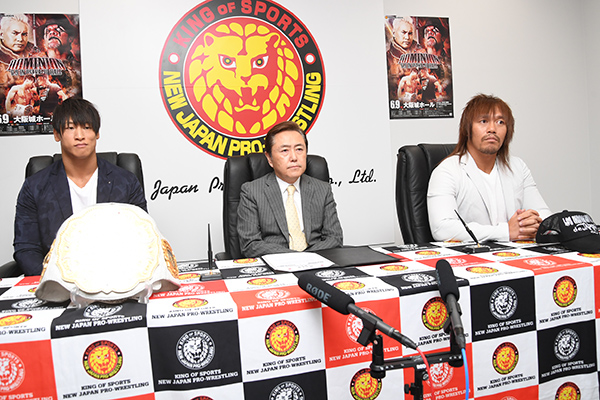 “Does everyone remember what I said in the middle of the ring on April 20 in Nagoya? I called out to see if there if there were any other challengers to the championship. As it was, nobody came down the ramp. Therefore, it seems like I’m the only one interested in challenging for your title. It’s seems like we’re at a cross-roads. I’m not yet tired of fighting for this same championship, but to be honest I don’t really like rematches. In other words, everyone here and everyone watching on the live stream, please listen carefully: The belt that I want the most at this moment is the IWGP Intercontinental championship. Of course, in the past I wanted the Heavyweight Championship, but I would like to clearly communicate this point to Kota Ibushi, the assembled press and everyone watching on NJPW World.” 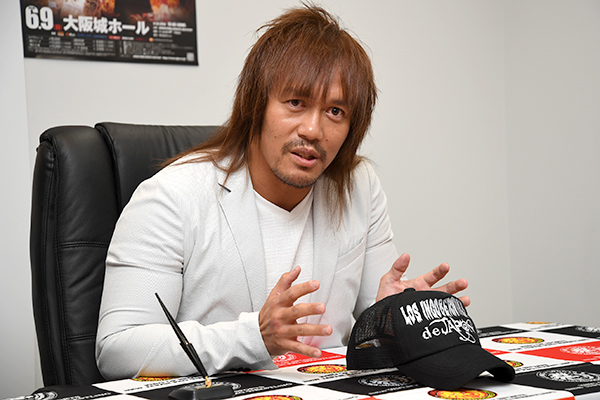 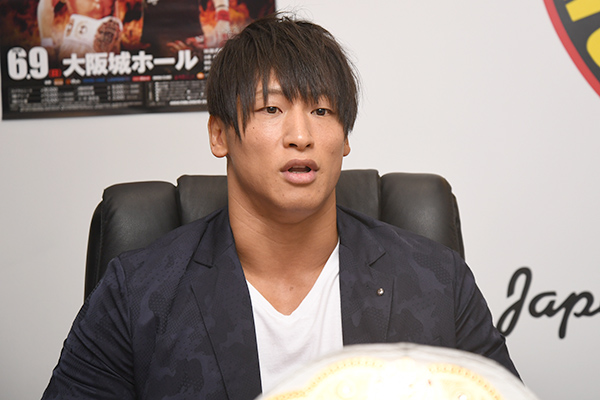 Questions from the assembled press:

Reporter: Naito, Ibushi just mentioned that he would like this to be the final match. What do you think?

Naito: We’ve been going back and forth since the New Japan Cup. He’ve had three (singles) matches this year already, yeah, it’s quite a lot. But to be honest, when we get in the ring together it’s exciting. I really like Kota Ibushi the pro-wrestler. As a man I hate his guts, but he’s an exciting and gifted pro-wrestler. Having re-match after rematch though… Let’s say I win tomorrow and he wants a rematch, and then he wins that and I want a rematch – I don’t understand it, we should make a rule about it to be honest. That’s why I asked in the ring, ‘is there any other challenger? is everyone OK with this?’ This time it’s OK, it’s the first time I’m challenging Kota Ibushi for the belt whilst he’s the champion. Thinking about next time though, I think this is enough rematches.

Ibushi: I feel the same, except the following; as a pro-wrestler I like Tetsuya Naito, but I also like him as a man. (To Naito) Why do you hate me?

[Chairman Sugabayashi does not respond]

Naito: Just as I thought.

Reporter: Kota Ibushi, you were not on the last series, but Tetsuya Naito was bad-mouthing you backstage, your thoughts?

Naito: May I jump in?

Naito: Let me explain my comments about Kota “the slacker” Ibushi. After every match he talks about how he wants to spread pro-wrestling around the world, but doesn’t he want to do it with NJPW?

Ibushi: Well in the past, my attendance has been spotty but… uh can we stop this line of questioning?

Reporter: Kota Ibushi, Naito says that even though he hates you, you’re able to have great matches together. Do you also feel your matches are good?

Ibushi: Yes, I’m sad that Naito doesn’t like me, but I feel the same way about our matches. Such a shame.

Reporter: Are there any other wrestlers you’d like to face?

Ibushi: Hmm, a wrestler with an unorthodox style would be interesting. I just feel that our matches might stat feeling a bit monotonous if we keep going. I think Naito feels the same way. 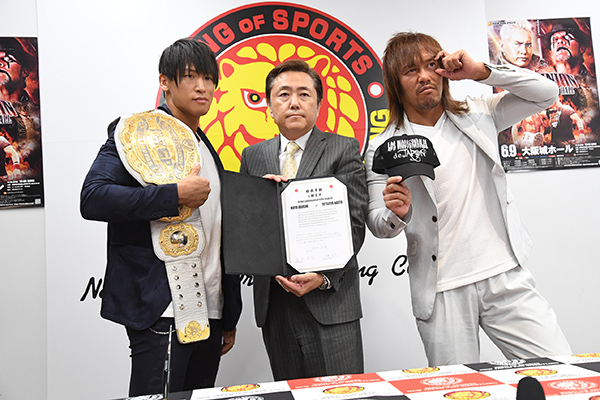 Both wrestlers as well as the Chairman signed the contract and posed for photos. 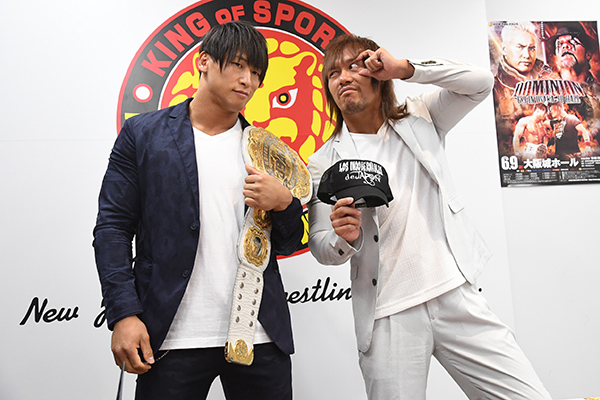 The second press conference was with the IWGP Heavyweight Champio, Kazuchika Okada and his challenger Chris Jericho. Jericho proved disruptive from the start, throwing Okada’s pen into the press pit and barging past Chairman Sugabayashi. 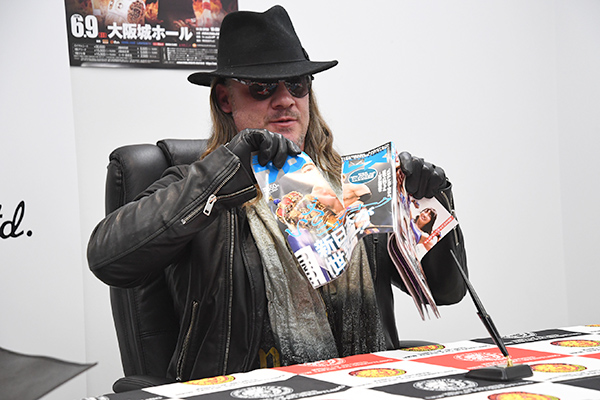 “Finally I could get to meet Chris Jericho. You call yourself the Painmaker, I guess it means you’re going to make it pain?! But surely Pro-Wrestling is painful anyway no? You’ve had IC championship matches, no DQ matches and other sorts here in New Japan, but this is the IWGP Heavyweight Championship. This is something quite different to what you’ve experienced before, please allow me to teach you.” 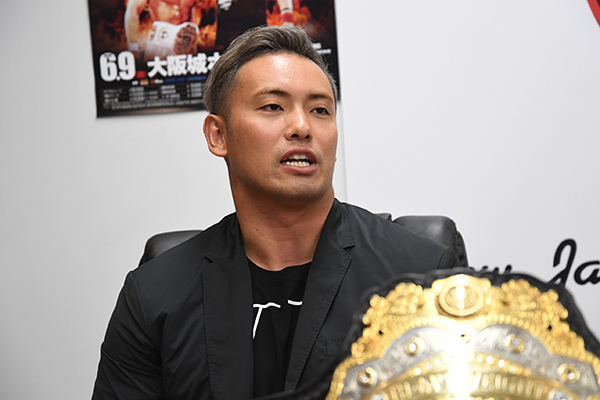 Jericho: “I’m really excited about this, because everyone always tells me, Okada is the best. Okada is so good, Okada is a genius in the wrestling ring. That’s why I’m here, I want to know how good are you Okada? I know you’re good, I’ve watched your matches, I’ve seen what you can do, you are amazing, but I am better. Tomorrow this (points at belt) is going to be mine and I am going to hurt you. You understand that huh? (Grabbing chairman Sugabayashi by the tie and jacket) You get it huh?

The chairman proceeds to take his tie off 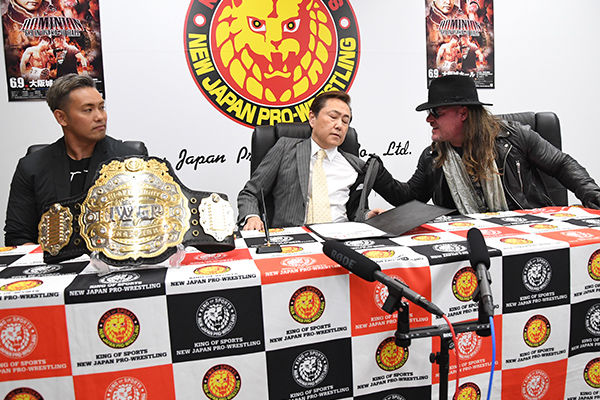 Questions from the assembled press:

Reporter: Chris Jericho, you’ve been wrestling in New Japan since you were young, but this is your first IWGP Heavyweight championship match. This must be a special moment for you, what does it mean to you?

Jericho: It’s very a special night for me. After all the times I’ve been to Japan, with New Japan and WAR and FMW, I think its 54 times I’ve been to Japan. This is a special time, 21 years after I was in the Best of the Super Juniors in 1997. This is the one championship I’ve never had. I’m a 6-time WWE champion a champion all around the world, Intercontinental Champion here in New Japan, but this is the big title, with the best, Okada, the face of New Japan. Tomorrow I’m going to take that face and give it a bloody nose and a broken orbital bone and a black eye and change the face of New Japan to Chris Jericho.

Okada: I know he’s a former IWGP champion and I saw him fight Kenny Omega at AEW but I don’t really know his career in New Japan in the past, but I know he had a great career in the United States. I was surprised to hear he was a six-time champion in WWE, so I’m very much looking forward to facing him in the ring.

Jericho: Think about how big of a name Chris Jericho is right now. Just one week ago I headlined in the very first AEW show and beat Kenny Omega, Okada’s greatest rival, beating him with the Judas elbow. Here I am 10 days later, headlining Dominion with New Japan. Nobody else can do that. Nobody else is a big enough star to headline Las Vegas and Osaka within two weeks. Kenny Omega – I beat him. Okada – I’ll beat you, I’ll be the IWGP Champion and at All Out I’ll beat Hangman Page and be the AEW champion. I’ll be double champion just like when I beat The Rock and Stone Cold Steve Austin both on the same night to become WWE and WCW double champion. That was a lifetime ago now here we are in 2019, Okada versus Jericho; a dream match, one of the biggest matches you could ever have.It could headline the Tokyo Dome, but tomorrow night in Osaka at Dominion in front of a sold-out crowd, it’s going to be one of the biggest matches you’ve ever seen in New Japan. At the end of it I will win, I will be the IWGP heavyweight champion. I have to. 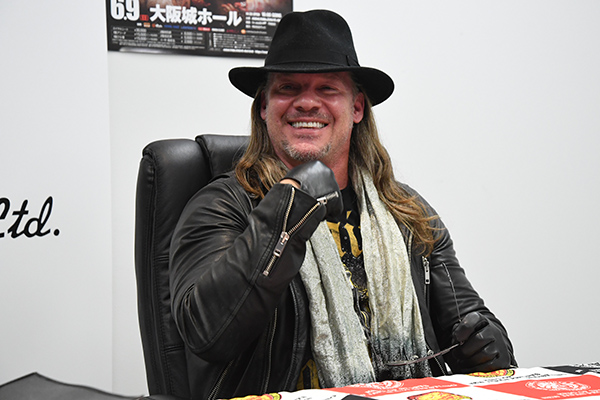 Reporter: Chris, how would you say the best of WWE pro-wrestling is different from the best of New Japan Pro-Wrestling

Jericho: Well, wee’ll find out because this is the best of New japan right here yes? Okada, he is the best, he is the facve of New Japan but wrestling it still boils down to the same thing: It’s all about star power, it’s all about fighting spirit, it’s all about being strong-style in the ring. I love watching Okada in the ring, it’s like watching a great artist paint his painting. He is the best in New Japan, but I’m the best in the entire world. Okada has faced them all, but he hasn’t faced Chris Jericho yet and tomorrow night he will go to a whole different level. He should thank me. 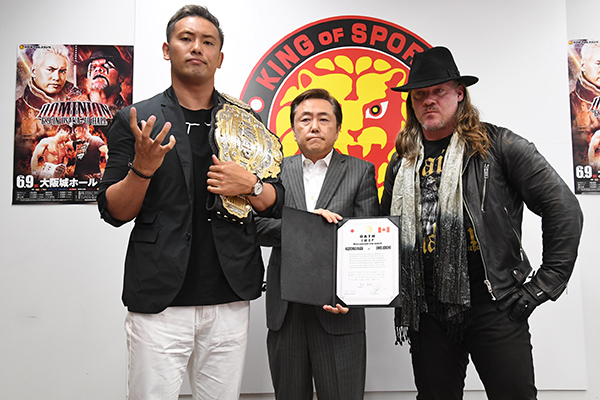 After the contract was signed, Jericho spent the whole photoshoot staring at Okada and eventually stormed off through the press pit after upending the tables, shoving Okada and being a general menace. 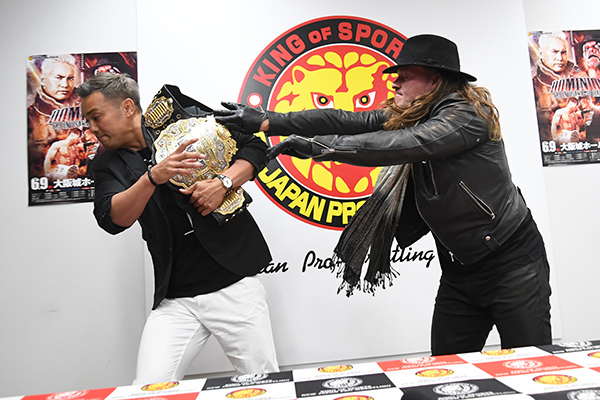 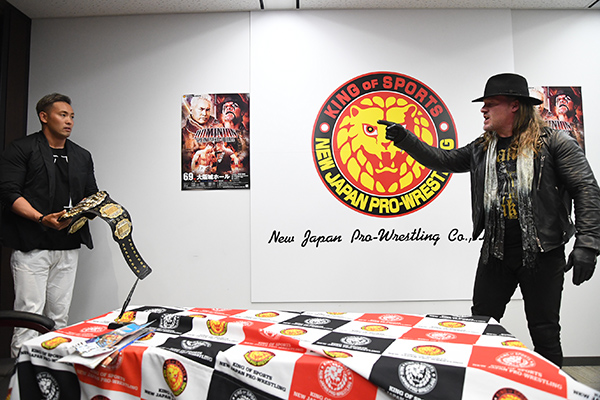 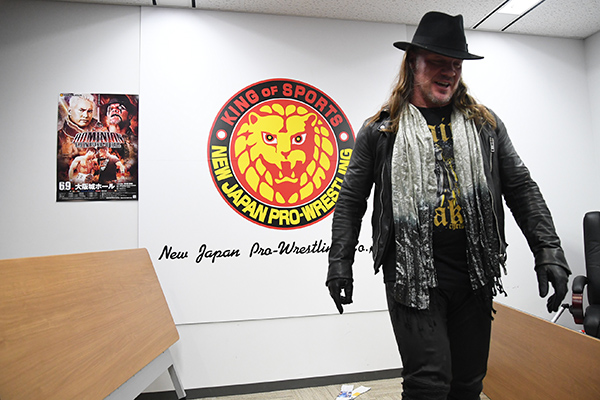