At Dominion on June 9, familiar music played as the fans erupted, welcoming Katsuyori Shibata to Osaka-Jo Hall. Shibata walked the ramp, gestured to the entrance, and was joined by none other than KENTA. From Pro Wrestling NOAH to WWE, KENTA has impressed audiences around the globe. Now he enters the toughest wrestling tournament in the world. We sat down with KENTA to discuss his debut in Osaka, and his G1 prospects.

‘I don’t want to end it like this. I want to try once more to bring my vision of pro wrestling to the world’

–You’ve been away from Japan from a while.

–You’re based in America now, correct?

KENTA: Yes, in Florida. I think my base will continue to be in the US, and I’ll be coming over to Japan to wrestle.

–Your appearance in Osaka in Dominion was major news, becoming a top Twitter trend. Why did you choose New Japan?

KENTA: Well, I explained this in my backstage comments, but I went to America, I went to WWE, and I didn’t really achieve what I set out to do there. I didn’t get the results I wanted. While all this was going on, I was still in contact with (Katsuyori) Shibata, and we talked about this and that. In the end it boiled down to ‘OK, what do I want to do with myself’? What I concluded was that I didn’t want things to end this way, I wanted to try once more to bring my vision of pro wrestling to the world.

KENTA: So that said, business is booming for NJPW, and if there’s anywhere that I can bring that vision worldwide, it’s in New Japan.

–Do you think those words, ‘New Japan’ have shifted in meaning in the time you were in WWE?

KENTA: I think so. You know, when people would ask me after I left WWE what I was going to do next, a lot of those questions would be followed up with ‘are you going to New Japan’? It really made me feel that NJPW had this big international influence.

KENTA: I mean, in April, NJPW filled Madison Square Garden, and the quality of the wrestling is always very high. I thought ‘OK, here I can make my mark’. The best wrestlers from all around the world are here. If I can do my thing in NJPW, it’s a chance for my style of wrestling to be seen, naturally, by the whole world.

–I see. So to you, being able to compete in New Japan means competing on a global stage.

‘If I can fit in here, I can awaken something that’s been dormant for a long time’ 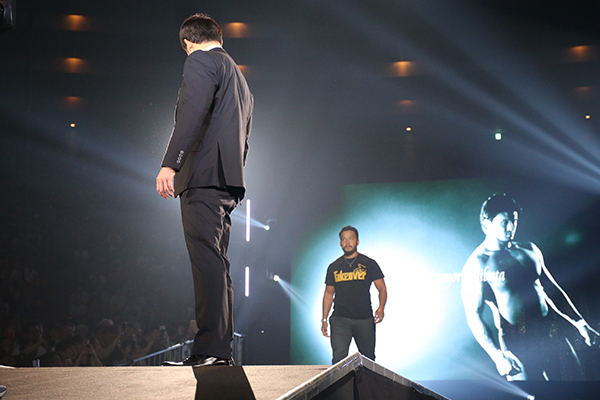 –You mentioned that you couldn’t achieve what you wanted to do in WWE. What did that experience mean to you?

KENTA: It’s hard to put into words but… it was a very tough five years. I got hurt, and beyond that I was really grasping for something during that whole time. It’s like, I came into the company to bring my style of wrestling worldwide, but what that actually became was bending and adapting to what the company wanted. That’s important in a sense, but the strength and aggression that I bring to the table got lost. That’s a real shame.

–You couldn’t express yourself in the way you wanted.

KENTA: One person there might tell you ‘do it this way’, and then another would be ‘no, no, do it like this’. That meant my own personal vision just crumbled away. There are people who can do very well in that environment, but I just couldn’t. So when that ‘what next?’ question came up, I didn’t ask anybody else what they thought. I just decided to focus on what I wanted to do. Otherwise there’s no point.

–It sounds like it was a difficult period for you, but did you gain anything from the experience?

KENTA: If I didn’t, the whole thing would have been meaningless. Of course, you want to succeed in everything first time and keep moving forward, but life isn’t like that. You take your knocks, and then have to learn from that, otherwise your experience is pointless. In the end, I have zero regrets about any of my decisions.

–So you think NJPW is the place where you can really show off ‘KENTA’s pro wrestling’.

KENTA: Right. My style isn’t really like the WWE style. There’s an aggression there that’s closer to Strong Style, my matches evolve in a more thrilling way. I think if I can fit in here, I’ll be able to awaken something that’s been dormant for a long time.

–So you must be really fired up to be in the G1.

–While you were a part of Pro Wrestling NOAH, it really felt that you were fighting with a lot of pride against NJPW at large. Has that feeling changed?

KENTA: No, not at all. Back then, I was representing NOAH, so it wasn’t just New Japan, but all the other promotions I had antagonism for. It wasn’t anything special for NJPW, it was for the whole world. Now I’ve made the decision to come to NJPW, but that doesn’t mean anything’s changed.

–You have actually wrestled in New Japan before, correct?

KENTA: Just once. 2002 in the Budokan, I wrestled Wataru Inoue. That was actually the night that Shinsuke Nakamura debuted.

KENTA: Nakamura versus Tadao Yasuda. But that was the only time I wrestled for NJPW.

–You wrestled a lot of NJPW opponents in NOAH rings, though.

KENTA: Yes, that happened a lot.

‘You know, that corner dropkick… I did that first.’ 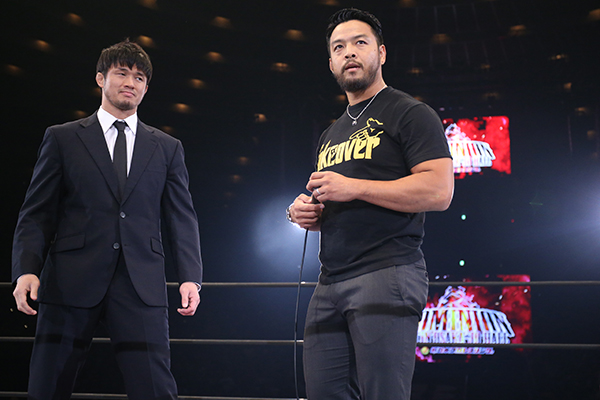 –Shibata was asked about you coming into NJPW as well, but can you explain your relationship with Shibata to the newer fans?

KENTA: Hmm.. Well, we have a lot in common. We don’t have many friends, we’re both pretty introverted (laughs)..

–You got on well outside the ring, and really became best friends.

KENTA: Right. When Shibata left NJPW in 2005, I actually invited him over to NOAH. Now it’s funny; the roles have reversed.

–You actually tagged together in NOAH.

KENTA: We did. So this is all quite emotional.

KENTA: To tell the truth, I’d love to get in the ring with him again, but it isn’t the kind of injury to talk about in simple terms like that. I’m sure it’s the thing he thinks about most; it’s not for me to talk about, really.

–Shibata is currently working in the LA Dojo, developing the next generation of talent. Have you considered training with him there?

KENTA: I’d like to go there, yeah. I really think he’s become a better teacher than I could imagine (laughs). He really understands how important it is to be developing those new guys. I think it’s awesome, what he’s doing there.

–You see it in his disposition, he’s become so much happier since he started working there.

KENTA: I’m so happy for him that he’s found his calling… Ah! Actually there was something I wanted to say about Shibata.

KENTA: That dropkick of ‘his’ in the corner. I started that, you know.

KENTA: It’s OK, really, really. But when other people do it and it gets called a ‘Shibata move’, my ears prick up, y’know…(laughs)

KENTA: Yeah. I just wanted to clear the air (laughs).

–Shibata is so respected around the world. Dragon Lee will use that dropkick and yell out ‘Shibata!’ while he does it.

KENTA: Ah, no, that’s OK, really. I just wanted to get it off my chest (laughs).

–Then there’s the Go2Sleep, a move you innovated that’s been used around the world.

KENTA: Well, it’s not like I invented the dropkick or anything. But when it comes to a move that I did make, that was another thing that got to me about WWE. A move I invented, I thought up, and I’m not allowed to use it? It’s crazy. Over here, well, nobody can say anything to stop me hitting it.

–You’re the originator. It’s just one more way you’d be showing your pro wrestling to the world.

In part 2, KENTA gives his thoughts on the G1 field and a certain individual called Jon Moxley!