The pre- G1 Climax press conference got underway in Dallas Friday afternoon local time, with the competitors from both blocks making their closing arguments. Their comments are below.

(Jon Moxley was not in attendance) 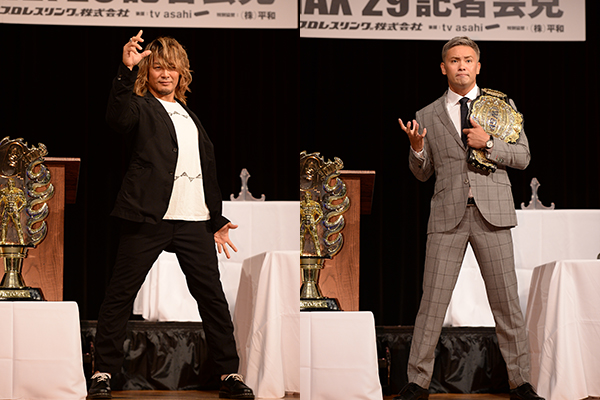 (In English) Hi, Dallas. (Japanese) Last year, I won the G1 Climax. This year, It’s important to start with a win against Okada to do the same. I will win tomorrow, and just like that, win the tournament two years running.

G1 is here in Dallas! Hearing everybody’s reactions today has me hyped for tomorrow. Tomorrow, we can show Okada versus Tanahashi to America, and show how hot the action is in the G1 Climax. I’m the New Japan Cup winner, and the IWGP Heavyweight Champion. I’m going to get on my way to the G1 trophy as well. 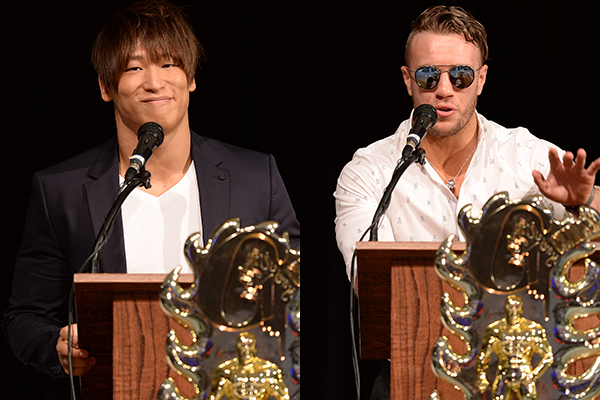 I’m Ibushi. I’m planning to do exactly what you think I will. I made the final last year, and this year, I’m going to win it. I’m not quitting, I’m not going away, I’m going to give it all I have.

I’m not going to lie, I’m not great with public speaking and I’m used to doing this in front of Japanese reporters, so this makes me nervous! This is my first G1 and I’m probably the lightest person in this tournament, but I hear I’m having a hell of a year. I never said I’m going to be the best, I said I’m going to do my best. I’m the first person to ever do the New Japan Cup, Best of the Super Juniors and G1 in the same year. I now bear the responsibility of the junior heavyweight division. My heart is here, and I will fight as hard as I can with every bit of heart I have. The juniors belong on the main stage and I am going to show that. You guys will be with me every step of the way. I will make you proud, hold the G1 trophy with the title and main event in the Tokyo Dome. I’ll be the king of both weight divisions. 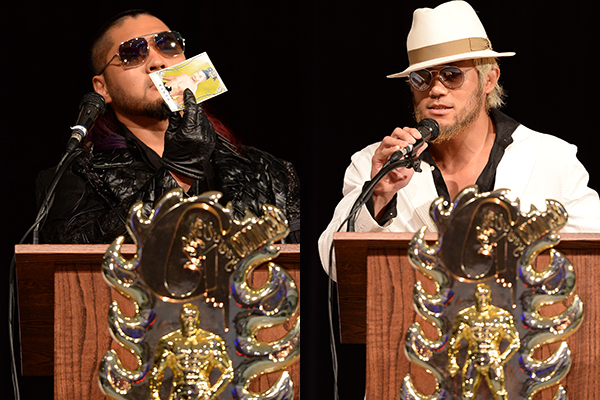 Welcome to the Darkness World. This year’s A Block? (EVIL holds up cards showing each participant). Pretty interesting. I’m going to envelop the A block in darkness. All of the wrestlers are coming to NJPW from all over the world, from NJPW and outsiders. There might be new guys, but I’ve always been here, and I am Made in New Japan, and I will stand at the top. Remember: This Is EVIL. EVERYTHING is EVIL. All of it: EVIL!

The world’s biggest, toughest tournament, the G1 Climax. I like this tournament best in the world. By the way, Dallas is my favourite place in America. 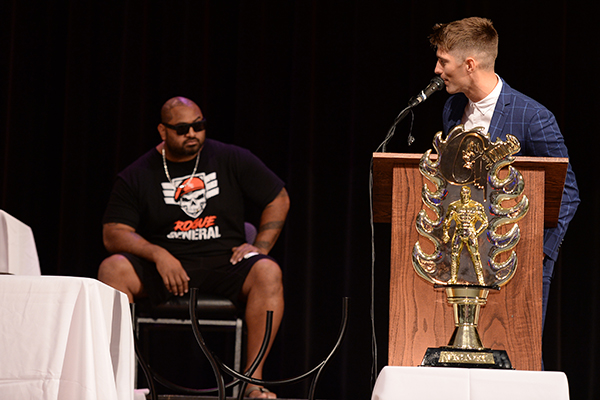 (Mockingly) I’m just so excited to be in the G1! Oh, behave. I should be in here. They made me put up in my spot as YOSHI-HASHI? Behave, Dallas. They put me in the same block as the champion? I’m going to tap out Kazu-chan in this tournament and then I have my title shot. I’ve been described as a bowl of spaghetti dressed as a man. I’m the noodle man. I have more submissions than Will Ospreay has stupid tweets. I’m going to submit everyone here and when I win the tournament, I’m not taking my title shot in the Tokyo Dome, I’m doing it in London, August 31 in the Tokyo Dome. I’ll make Royal Quest into Zack’s Quest and become the first ever British IWGP Heavyweight Champion. As you were. 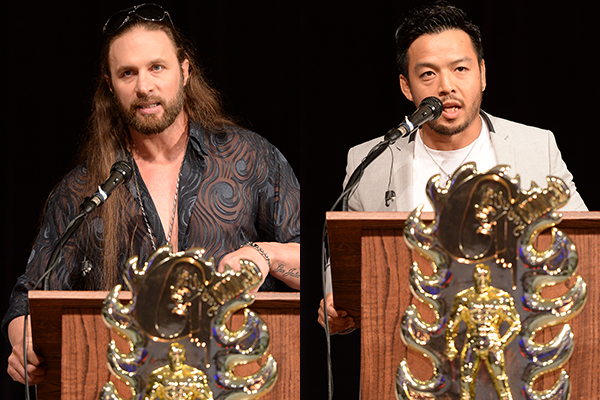 Everyone, welcome to my home! July 5, 2000 I made my debut. I’ve celebrated my 19 year anniversary and now I bring the G1 to my home. This is my fifth G1 Climax. People know me as a tag team wrestler, but this is a new beginning for me, and I’ll start by killing you Ospreay. I’ll welcome you to the heavyweight division and show you pain you can’t imagine. The G1 starts in Dallas and ends in Tokyo. I’m going to be the G1 winner, and in the Tokyo Dome, whether it’s January 4 or 5, I hope Okada is the champion. I’ll kick your ass in the G1, kick your ass in the Tokyo Dome and bring the title back to Dallas.

(In English) What’s up Dallas? I’m so excited to be here and be part of G1. I came here to show the world who I am. I am f***ing KENTA. Tomorrow, I’m going to kick Ibushi’s ass. See you tomorrow. 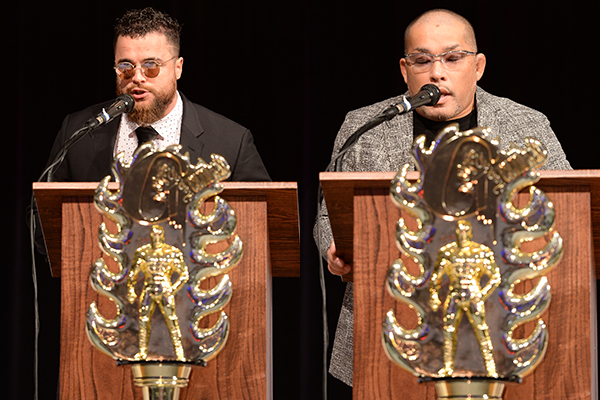 I’m going to get results and make a big impact starting tomorrow. 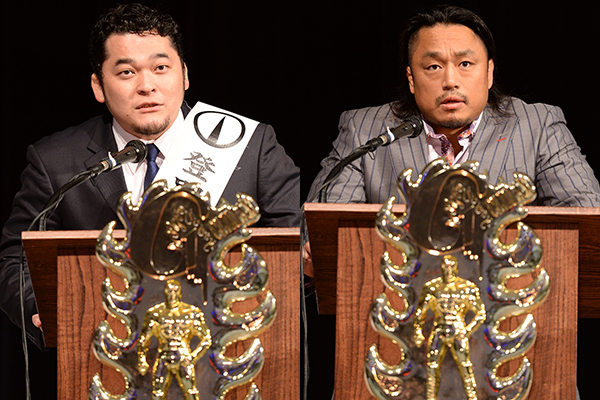 I’m the ambassador for Noboribetsu in Hokkaido, the curry producer and YTR VTR producer. It’s going to be a tough tournament but I have a new DVD out celebrating ten years of CHAOS, and this delicious spicy curry as well. I’ll do my best for the fans and for Noboribetsu. Thank you!

To beat Jay White, I’ve been training in the LA Dojo. I’m excited to show the world just how good I am and how tough I am. With all the sweat and effort I have I will put Jay down. 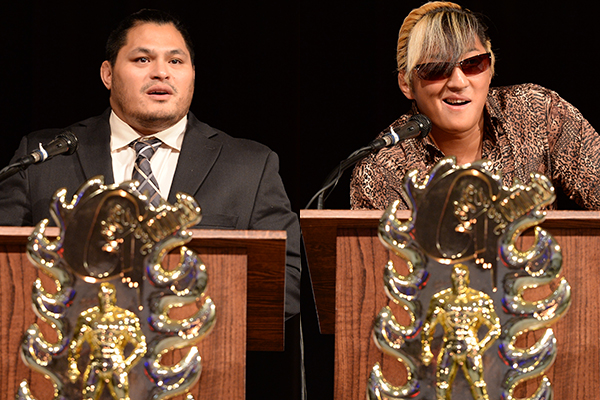 Aloha, you people. It’s an honour to be part of the G1. Since I’ve been announced, I’ve been compared to other people that have been in here. I’m totally different. One thing, my suit fits me. Number two, I’m a different breed. You might naysay me, and that’s fine, but starting tomorrow and all the way to the finals, I’m having a party. A suplex party and all these guys are invited.

Shut up! Sit down. Shut up all of you! I hate flying, I hate being here, and my first opponent isn’t even here, I’m not even in a match tomorrow. Why am I here? Why? You guys are probably thinking the same thing. My opponent, Jon Moxley. He gets special treatment, to not have to be here? Or is he scared of fighting Taichi? He might be a superstar, but with his dingy costume he’s just some guy. A block, B block, I don’t care, I’m tearing the whole thing apart. Then next year, you’re going to have to give me that special superstar treatment. 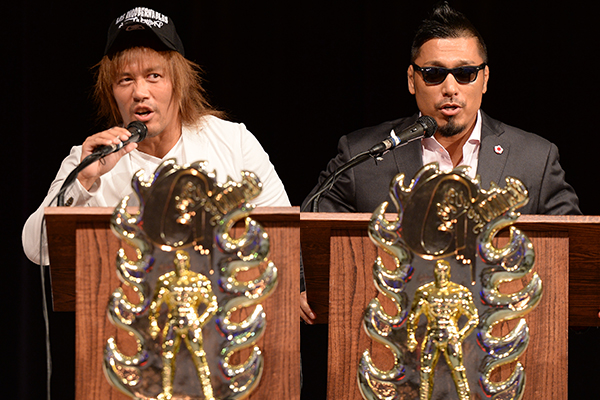 Hola, amigos. This year, just like the last few years, the G1 winner gets an IWGP title match contract. It’s the quickest way for me to get what I want, which is to hold the Intercontinental and Hevayweight titles at the same time. So my motivation is high. But first things first, I will focus on the G1. How will this year’s G1 Climax end? The answer, of course- Tranquilo! Assen na yo! See you in the arena tomorrow.

I went through the Best of the Super Juniors and now I’m in the G1 as well. As far as I’m concerned, I’m making the G1 an Openweight tournament, and I will take the top spot. If you just look at the field here, there are a lot of opportunities here. Ishii, Moxley… Naito. Three singles champions are in the block. I don’t plan on losing to anyone, I’m super excited. The Dragon’s Journey will run through the G1, and I will show the kind of wrestling only I can provide. That’s all I have to say. 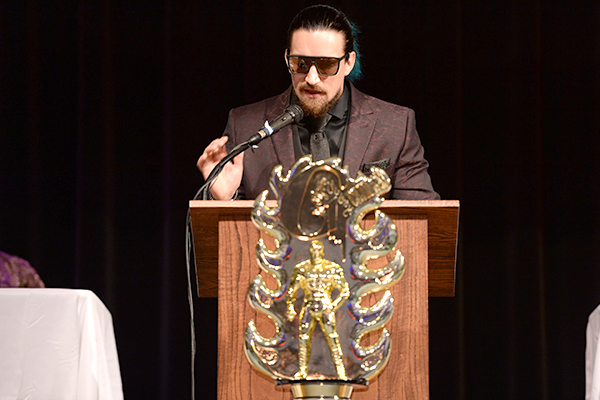 To be honest, I’m disappointed. Firstly that I have to be here in front of you, and second that I have to be in the G1 when I am already number one contender. It’s a joke I have to be here, a joke I have to beat Goto again, and a joke that I have to prove myself again when I should be at the front of the line. So let’s get through the stupid questions. My goal? Win it. Any other goals? No, the point is to win it. Thoughts on the other guys? No, it isn’t about the 20 best, it’s about the one best, that’s me, and I’m the best, the others are just trying to get famous of my back. Thoughts on being in Dallas? I don’t care, I’m not from here. But I think it’s unfair that we’re giving these undeserving Dallas fans this event, and holding the start of the G1 in this cesspit of a country.