Night three of G1 Climax 29 sees the A Block have their first tournament matches in Japan. The second evening of an Ota double header will see Dallas’ winners attempt to press their advantage, while those on the losing end on July 6 will come out swinging as they look to redress the balance. 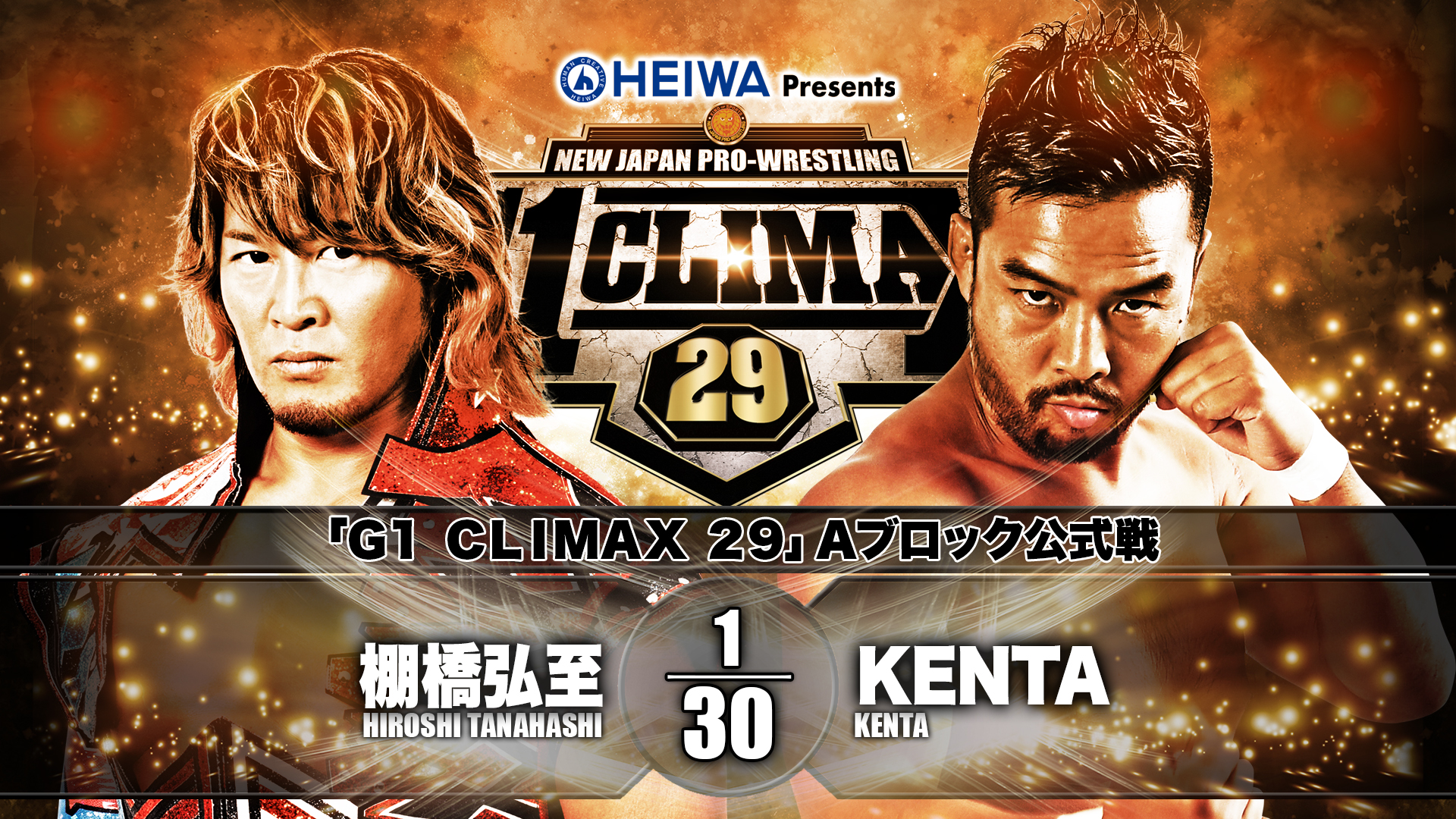 KENTA started his first G1 in Dallas with focus, determination, and vicious strikes to Kota Ibushi, ending the Golden Star’s night with Go2Sleep and instantly establishing himself as a contender going forward. A lot of questions had surrounded KENTA going into the G1; with five years out of the Japanese wrestling spotlight, he had a tough mountain to climb against premier competition, and with a surgically repaired shoulder still fresh in the mind.

Similar questions surrounded Hiroshi Tanahashi’s first night in the G1, yet while KENTA was able to allay any doubts, Tanahashi would fall to Okada. Post match, Tanahashi would posit that only now did he know ‘the level I stand at’ and what’s needed to get back to his winning ways; it’s with this knowledge that he faces KENTA in Ota.

Tanahashi and KENTA have never shared a ring, but have a lot in common. Both have been proud leaders of the promotions where they found their fame; Tanahashi in NJPW and KENTA in NOAH.

Both, too, share a friendship with Katsuyori Shibata. KENTA’s friendship with Shibata would bloom when The Wrestler left NJPW in 2005, a decision which angered Tanahashi at the time. On Shibata’s 2012 return to New Japan, it took a long time for the two to mend fences, but this they did, culminating in Shibata accompanying Tanahashi to the ring for the 2018 G1 Climax final. Shibata was still firm friends with KENTA though, and just like KENTA invited Shibata to NOAH in 2006, so Shibata returned the favour in 2019. One wonders what Shibata thinks of this match, and who his pick will be; either way he’ll likely be impressed by the fight both men show in the ring, and the fans in Ota will have the same reaction. 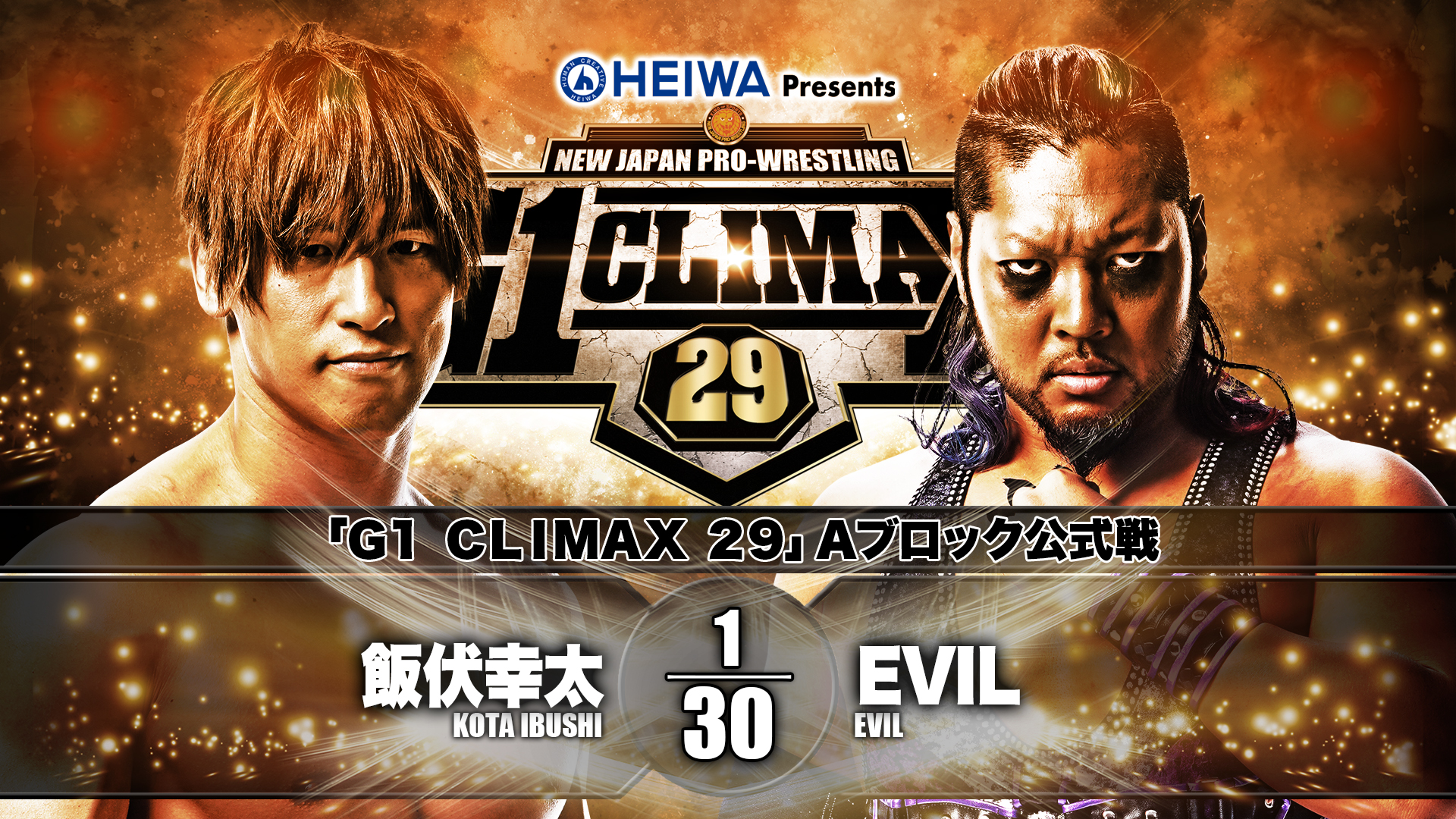 Another first time singles bout in Ota sees Kota Ibushi take on EVIL. Prior to the G1, Ibushi highlighted EVIL as one of the first time opponents he was most excited to face, and with both heading into their second G1 match at a 0-1 deficit, the feeling is likely mutual for EVIL.

In all of his three G1 entries, EVIL has proven himself to be highly adaptable and highly effective regardless of his opponent. Ibushi is arguably the most unorthodox competitor he’s faced in his career, but EVIL is well equipped when it comes to dealing heavy hits in the ring, or, if it comes to it, out on the floor.

Still, EVIL will come into Ota beaten up, after some tough steel chair assaults from Bad Luck Fale in Dallas. Similarly, Ibushi arrives bearing some damage to his ankle after a wayward dive to KENTA in his Dallas match. Both are already dealing with battle wounds then, and wounded pride at a first match loss. There is much to prove on both sides in Ota. 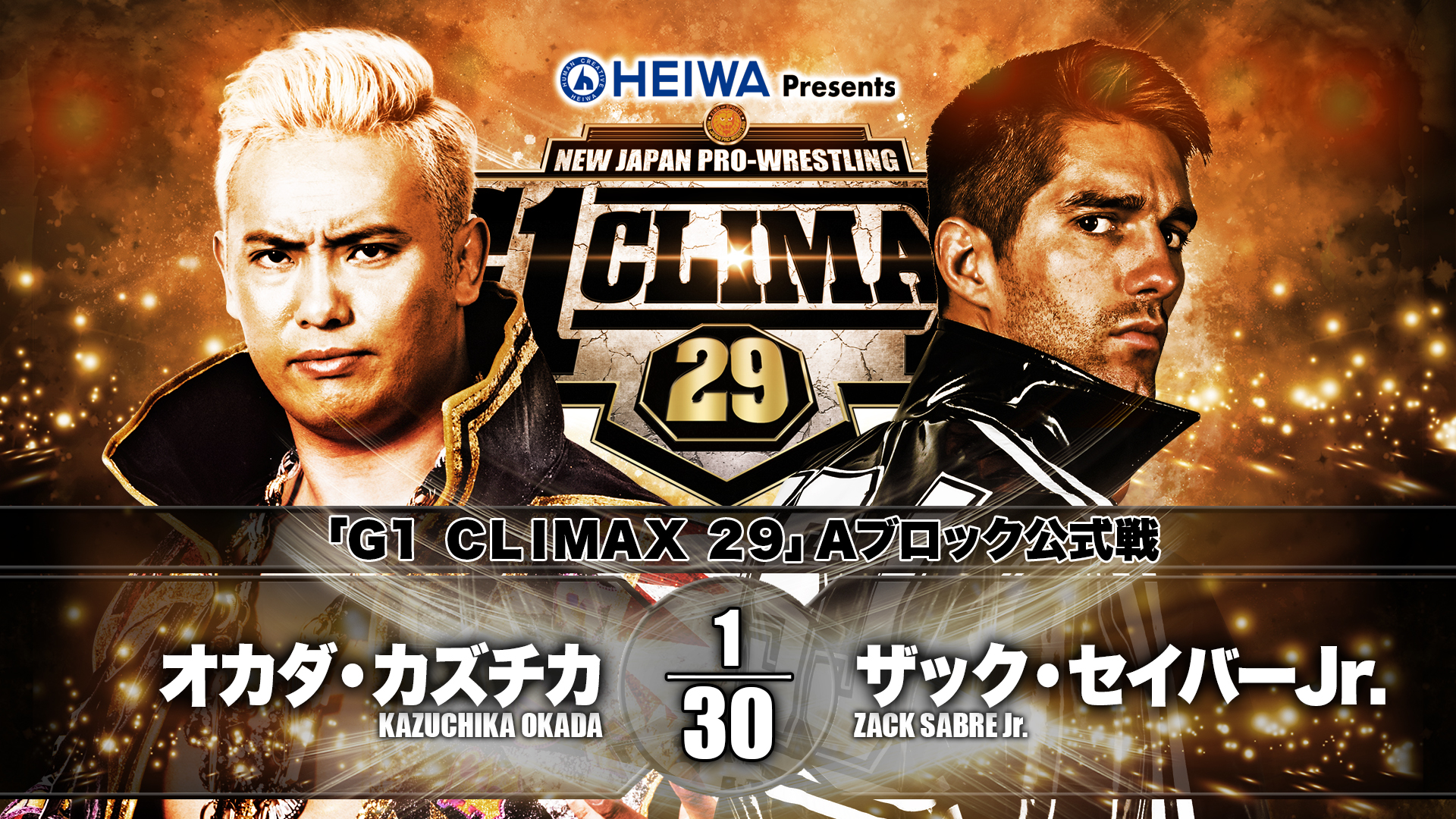 Zack Sabre Junior walks into Ota with dented pride. For the second G1 in a row, he was caught with a bridging clutch by SANADA, costing him two points early. Conversely, Okada broke a three G1 deadlock of time limit draws with Hiroshi Tanahashi to start his G1 campaign with an emphatic Rainmaker and a vital win; the IWGP Heavyweight Champion was always going to be the man to beat in A Block, and his first match underscored that point.

He is the man to beat as far as ZSJ is concerned; Sabre had bragged before the tournament that he planned to beat Okada here and earn an IWGP Championship opportunity early, before taking the end of the tournament off. As Okada rightly stated in Dallas, though, there are no days off in the G1 Climax, and behind his British bullish bravado, ZSJ knows first hand just how tough Okada is.

At Sakura Genesis 2018, Okada was able to power out of a crunching Sabre submission to land a Rainmaker and retain the IWGP Heavyweight Championship. Later in the year, however, after Okada had lost the title he held for nearly two years, ZSJ was able to score a shocking win with a European Clutch in Manchester. Who will have the upper hand in Ota? 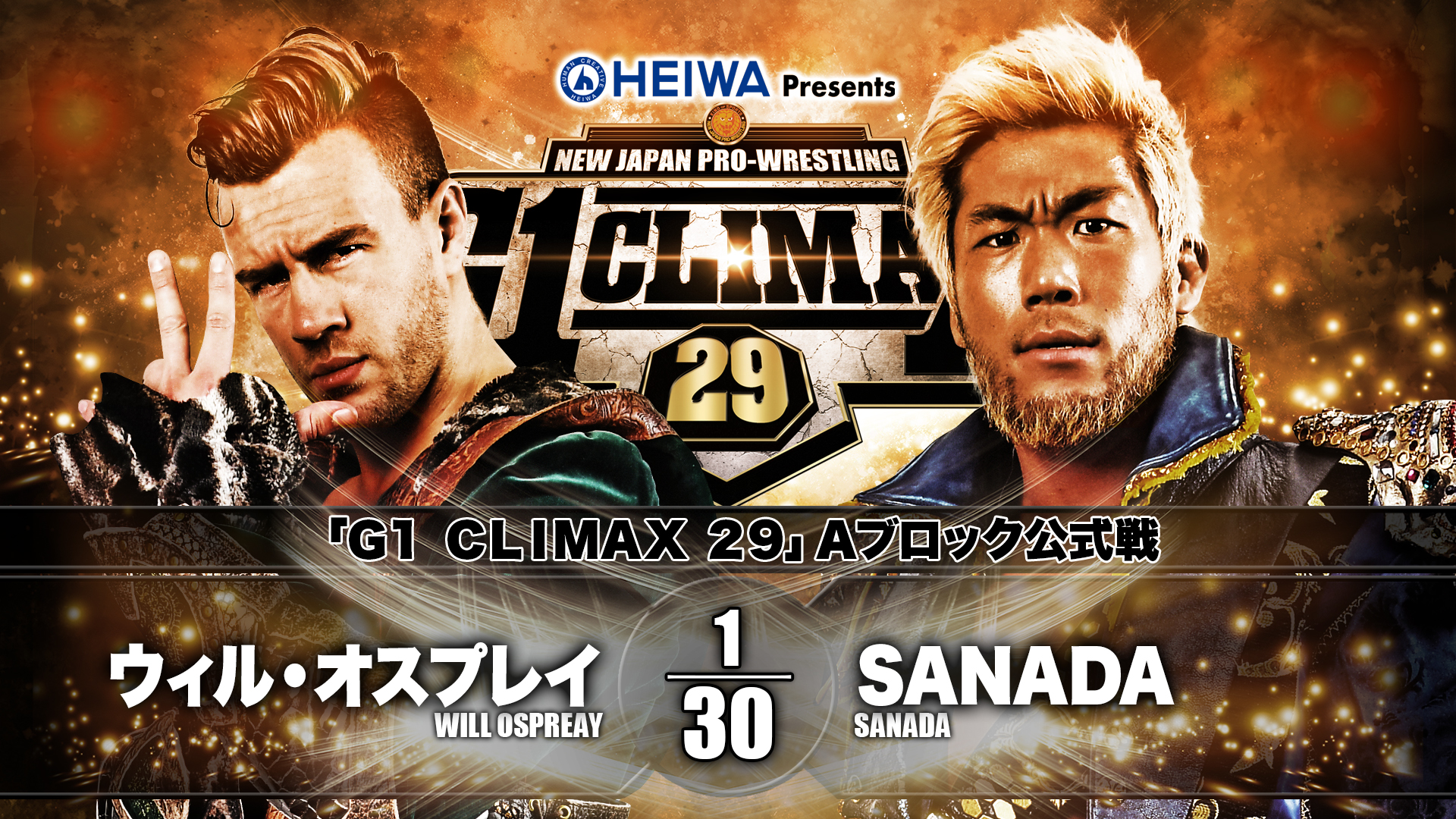 SANADA heads into his second G1 match having defeated Zack Sabre Junior. He now looks to polish off the tournament’s other Briton in Ota, but Will Ospreay is an entirely different prospect to ZSJ.

With his newly gained hard strikes and incredible strength matching the athleticism Ospreay has always been blessed with, Ospreay has become somewhat of a chameleon in ring, able to adapt to any situation. Where once Ospreay may have needed to dictate a high pace in order to get his hand raised, Ospreay has been able to let opponents like Shingo Takagi in the Best of the Super Juniors set the pace of the match, only to adapt and come out on top.

This is exactly the field where SANADA, too, excels. Cold Skull’s big wins, including against ZSJ in Dallas, have come from beating his opponents at their own game. SANADA is equally as proficient technically as he is taking to the air, and his own striking game is not to be ignored. It all adds up to yet another unpredictable encounter in the G1. 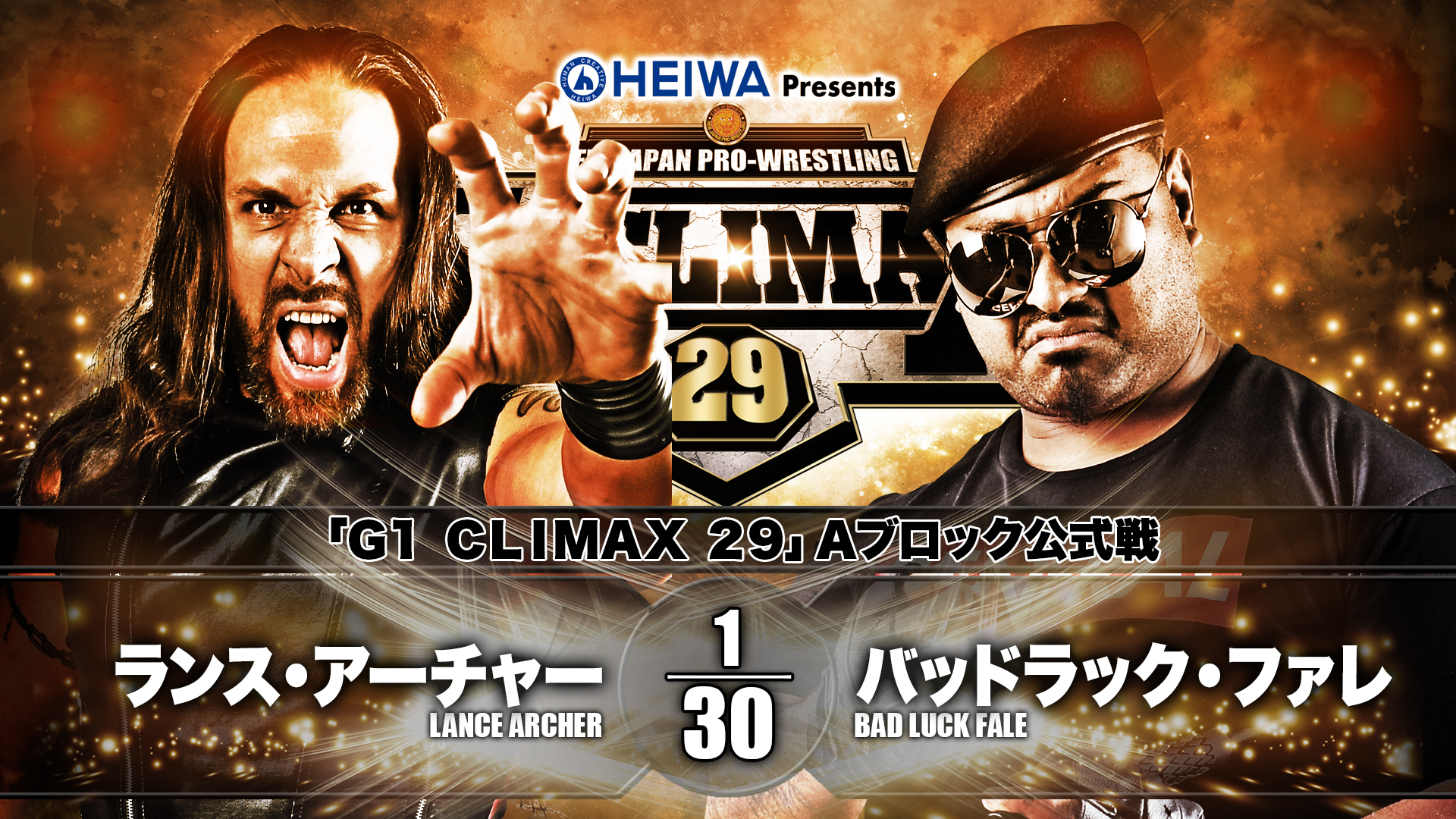 Lance Archer undeniably started the G1 strong, avenging a New Japan Cup loss with a stunning display of brutality against Will Ospreay in his native Dallas.

Archer’s match with Ospreay was match of the night to many fans in the American Airlines Center, but that shouldn’t discount the equally effective and equally violent efforts of Bad Luck Fale. Fale put away EVIL in a weapons heavy brawl that may well be closer to the style of match we’ll see in Ota than the Archer/Ospreay encounter.

While this is their first G1 Climax meeting, Archer and Fale have locked horns once before, in the first round of the 2018 New Japan Cup. Then, it was Fale who emerged triumphant following a Grenade from Fale. Could Archer right another perceived wrong in Ota, or will it be Fale going 2-0 up against Archer, and 2-0 up in the tournament?