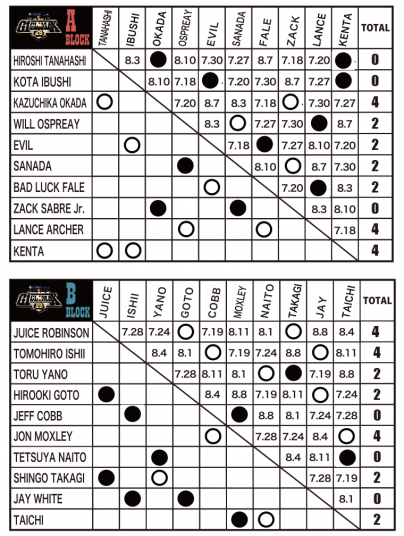 Night four of the G1 saw the tournament head north to Sapporo and Hokkai Kita Yell. As announced before the night’s card, Will Ospreay was absent due to injury. 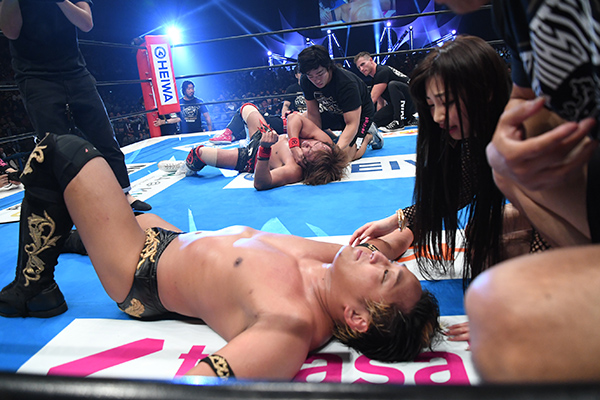 After Taichi’s teases going into their main event match of bringing Takashi Iizuka (or indeed, another surprise) to hokkaido, Naito was constantly looking behind him during his entrance, but entered unscathed. Naito baited Taichi down to the mat early and nearly rolled up Taichi, before taking time to dictate the pace outside. Naito sent Taichi into guardrails at ringside, but Taichi would resort to using Abe Miho as a human shield, creating distance enough to land a low blow back in ring.

The two went back outside, this time with Taichi on offence as he cracked Naito with a chair. A wounded Naito tried to fire back but was met with an eye rake and continued deliberate offense. 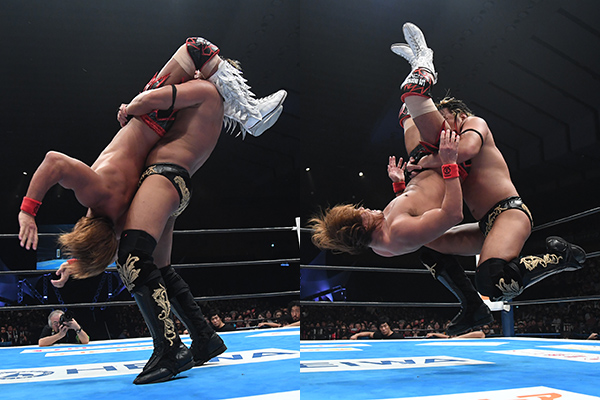 Naito would fire back, and nearly negotiated Taichi into Gloria, but Taichi would impressively hit a gamengiri before removing his trousers to the delight of at least some of the Sapporo crowd. A Last Ride was countered by a Frankensteiner by Naito, but Taichi would land a Kawada style Dangerous Backdrop for a near fall, staying decidedly one step ahead of El Ingobernable.

Taichi would then reach for Iizuka’s famous Iron Finger From Hell. As he distracted the official and ringside Young Lions by making them look to the entrance, Taichi would swing with the finger, but got caught by Naito with a dropkick and Gloria.

Yet when Taichi looked to his own effort, he was proving himself to be more than capable enough. A second powerbomb attempt was countered as Taichi stuffed Naito with a Triple Crown Bomb, as Taichi continued to channel Toshiaki Kawada. Naito fired back with a reverse Frankensteiner and running Destino, but the full Destino was countered with Black Mephisto.

Taichi couldn’t make the cover however. As Naito quickened the pace, Taichi managed to pull Red Shoes into Naito’s path; Kanemaru and the Iron Finger were brought into play, but when both were countered, Naito hit Valentia for a clear visual pinfall with referee downed. As both found their feet, Taichi would finally be able to land the Iron Finger From Hell flush before a Last Ride led to the pin. 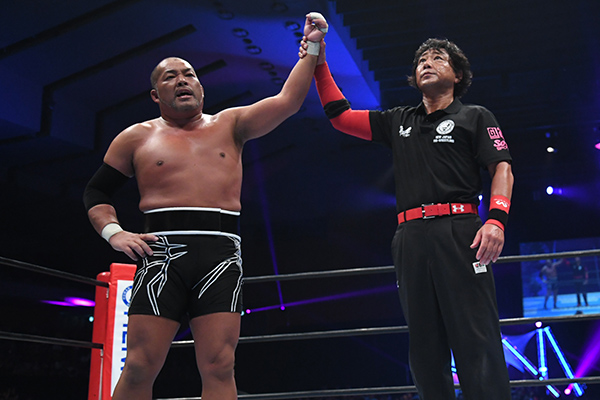 White tried to dictate the pace early, but his plan went awry when Ishii threatened to slug Gedo at ringside. Ishii took control, but Gedo made up for earlier panic by distracting Ishii at ringside, allowing White to bounce the Stone Pitbull’s head off the ring post.

White taunted Ishii in ring, but this fired his opponent up, as Ishii landed chops to the Switchblade’s throat. White would plant Ishii with a DDT however, and followed with the Bladebuster. Jay would then deviate from his usual gameplan however, trying to test Ishii’s pride with a lariat, and paying the price as Ishii landed a powerslam.

White tried to out maneuver Ishii into a Bladerunner but was met with the Kawasaki Kiss; the respite was brief however with White landing an Uranage and Kiwi Crusher  for two. The assault on Ishii’s neck continued with a Snap Sleeper Suplex, but Ishii fired back with a German.

A stiff powerbomb followed for two, and even Gedo on the apron couldn’t stop a sliding lariat for another very near fall. White did his level best to counter Ishii’s momentum into a Slingblade, but Ishii wasn’t to be denied and landed a vertical drop brainbuster to end a thriller. 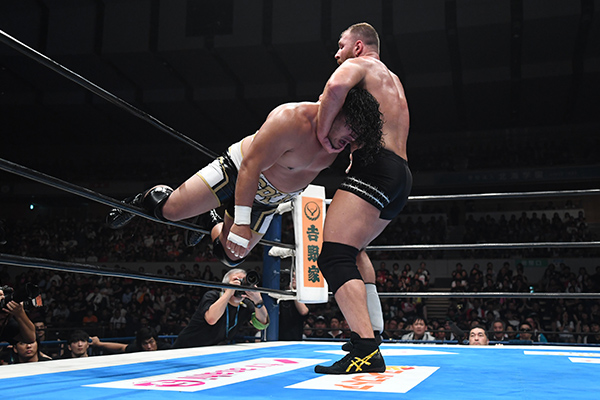 The match started surprisingly scientifically as both men traded holds. Cobb sent Moxley flying with a belly to belly, but as the match spilled to the floor, Mox flew with a suicide dive. Later the two went outside once more, and both would charge full force at one another on the ramp.

Moxley followed by working over Cobb’s arm over the guardrail, which hindered Cobb’s attempts to lift Moxley in ring. The former Olympian did manage to land a huge German suplex, but a high risk repetition of the move off the apron was countered. Moxley would then meet Cobb coming back in with a DDT over the ring ropes to win the match in 8 minutes 54 seconds. 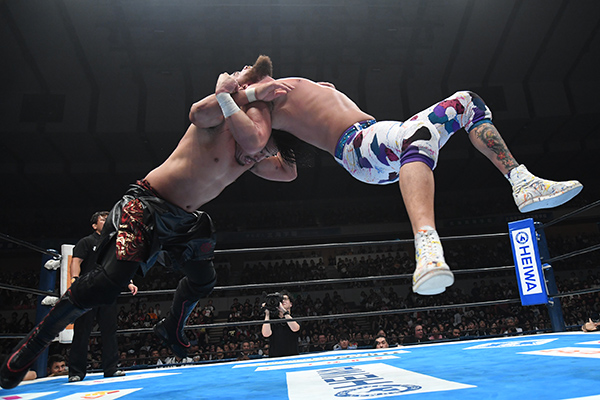 Goto led with some impressive offence against Robinson, especially his kicks, with a huge spinning heel kick in the corner. As momentum gathered for Goto, he landed a big Ushigoroshi for a two count; Robinson tried to power out of a follow-up GTR attempt but was met with a big headbutt and some rapid fire kicks. Juice seemed to be out, but would fire up enough to hit a Jackhammer to Goto.

On the back foot, Goto rolled up Goto on another GTR attempt for a two count. On the way out, he tried to hit the Left Hand of God but only succeeded in hurting his own hand on Goto’s charging skull. Robinson used his own head to Goto though, and then was able to hit the punch flush on Goto’s chin. A Pulp Friction later and Robinson went to 4 points. 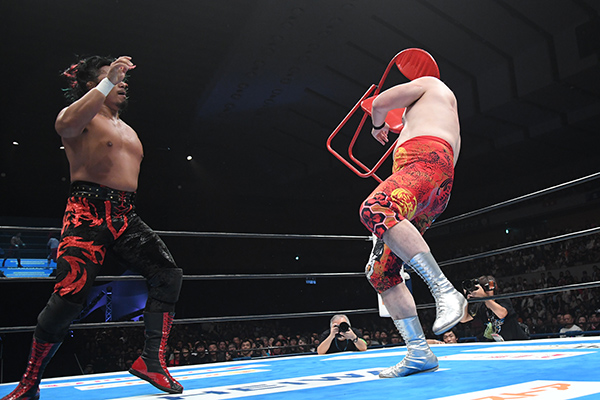 As the sightseeing ambassador for Noboribetsu, Yano got a warm reaction from the Hokkaido crowd. For the second G1 match in a row, apparel led to an advantage for Yano as he nearly rolled up Takagi thanks to a Tshirt over the Dragon’s head.

Yano baited Takagi outside and nearly got a countout victory by constructing an elaborate barricade to trap Takagi outside. Takagi managed to re-enter however, and used his power to take Yano off his feet. With classic misdirectional skill however (perhaps learned from Rocky Romero), Yano used a stunned ref and a steel chair to try and get Shingo distracted. As Marty Asami tried to figure out what happened, BUSHI appeared at ringside. Takagi used the distraction to bounce the chair off Yano’s skull and followed with a Pumping Bomber to score his first G1 points. 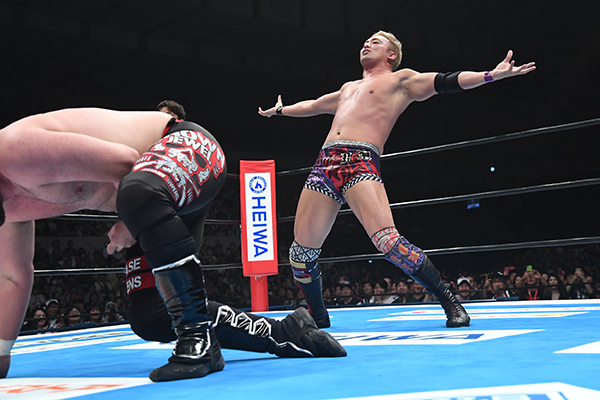 For the second match in a row, there was almost as much action outside as inside the ring as Owens targeted YOSHI-HASHI while Fale attempted to choke Okada with a camera cord. In ring though, Okada was able to string some offence on Fale, including an impressive slam. Okada would counter a Fale Grenade with a dropkick, and YOSHI-HASHI followed up with an amazing lariat taking himself and Fale out of the ring.

Okada and Owens were left alone in ring, and Okada delivered a full course of elbow drop, pose and Rainmaker for the win. 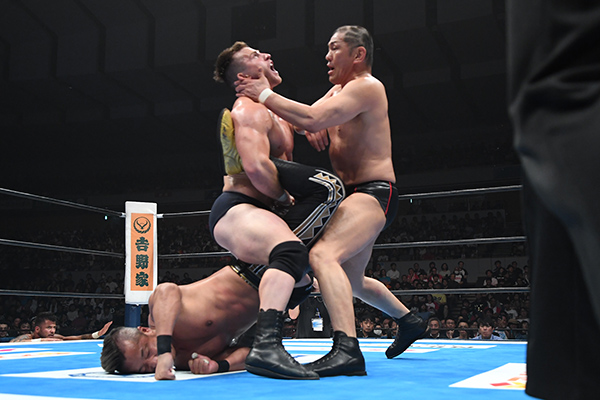 The traditional Suzuki Gun jump start saw Archer and ZSJ go straight after their next G1 opponents while Suzuki and Kanemaru targeted the LA Young Lions. When some separation was gained, KENTA pointedly tagged in Fredericks rather than Tanahashi, and moments later Suzuki was in his punishing element.

Fredericks was not having the best 29th birthday party, as Suzuki buried him under chairs and guardrails. Fredericks did show a lot of heart though, as he powered out of a ZSJ submission attempt to tag in Tanahashi. Ace and Submission Master had an electric exchange, while KENTA provided a surprising, if underhanded assist with a kick to Sabre from ringside.

As the match broke down, ZSJ held Tanahashi in a Figure Four as Archer had KENTA in the EBD Claw. That left Connors to fall to a Kenamru Deep Impact. Post match, the Suzuki Gun members didn’t let up as they looked to press the advantage before Korakuen on Thursday. 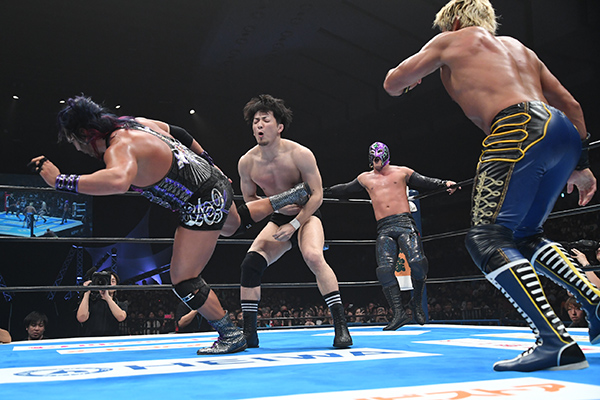 EVIL and SANADA had a tense standoff before the bell, with their tournament match against one another coming on Thursday in Korakuen. As the match started, EVIL showed his power opposite both Narita and Honma, but his first tag went to BUSHI, not regular partner SANADA.

When Cold Skull did get in the ring, he worked over Honma’s neck, but Honma was able to strike back with a Kokeshi. Henare showed immense strength and tenacity against both SANADA and BUSHI, before he and Henare hit a double Kokeshi to BUSHI, allowing for a leg lace Boston by Narita. Moments later though, Narita was alone to face a triple team and then BUSHI’s MX.

Post match, EVIL attempted to hit EVIL on SANADA, who countered into a Skull End before releasing. Mind games were played before they face off for real on Thursday. 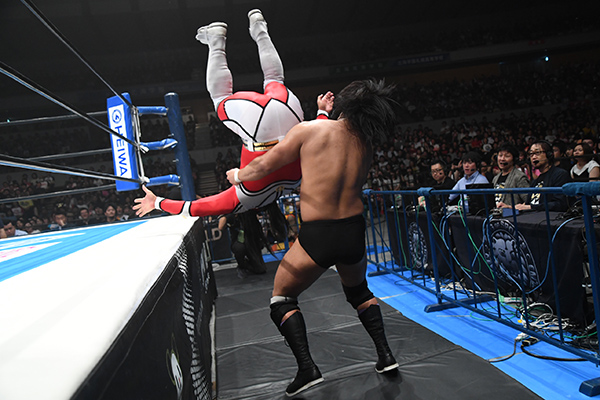 Jyushin Thunder Liger got a tremendous reception as he walked out in Sapporo for the last time in his career. Ibushi held Tsuji back at ringside early for Liger to hit a baseball slide outside to a big reaction, and followed with a Romero special in ring, but Umino broke things up.

If Ibushi’s ankle was still troubling him after it being tortured by EVIL in Ota, it didn’t show, the foot providing a stable base to some stiff kicks to Tsuji and a punishing crab that led to the finish. Post match, Liger told the Hokkaido crowd that this would be the last time he wrestles in front of them before his retirment, but he looks forward to the fans’ support over the next half year.