G1 heads to Hiroshima for the night eight of tournament action. B block is up next, with a lot of personal pride in the main event, and Jay White in what could turn out to be a must win situation. 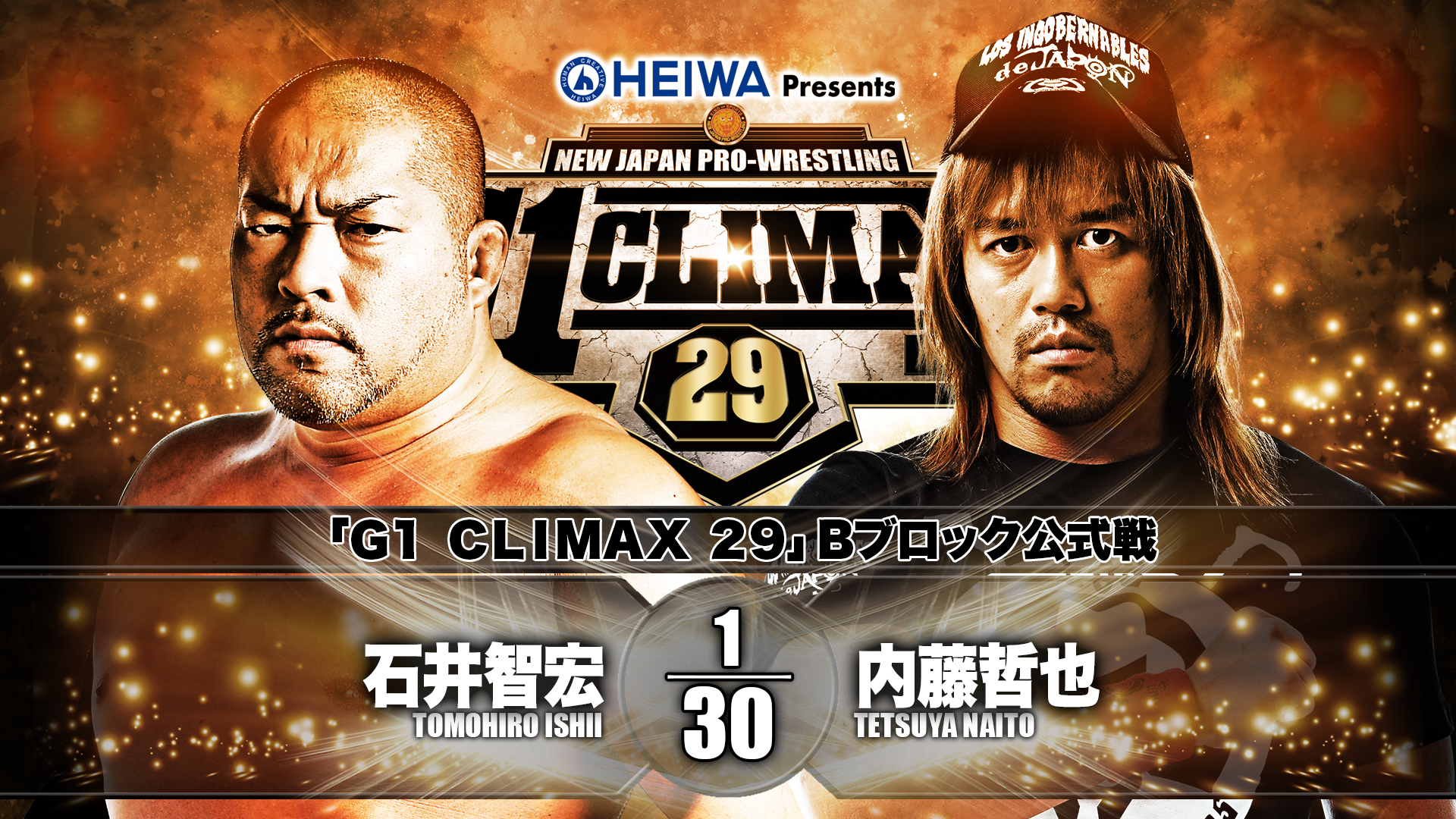 Before the G1 started, Tetsuya Naito said this match wasn’t so much about Tomohiro Ishii as it was about being in the main event in the city of Hiroshima. Naito’s fandom of the Hiroshima Carp baseball team may have led to the city becoming an adopted home town for Naito, but believe it or not, his singles record in the city is short, and emotionally mixed.

Naito has only wrestled in two singles matches in Hiroshima, both in 2015, bookmarking the two distinct chapters of his career. In March that year, he fell to a Kota Ibushi Hitodenashi Driver in the New Japan Cup semi-finals; a tournament Ibushi went on to win while Naito headed to Mexico for what would be a relevatory excursion. He would return not as the Stardust Genius, but as El Ingobernable, starting his connection to the Los Ingobernables stable and entering the G1 Climax as a radically different type of wrestler.

On July 26, almost four years to the day before he meets Ishii, Naito wrestled in the main event. He won the match, using Destino for the very first time to best Hiroshi Tanahashi. Where now the Hiroshima fans would cheer wildly, then it was a different story. Boos rained down on Naito as he stood over the prone Ace and told the world ‘I am the ungovernable, Naito’.

Naito hasn’t had a chance to revel in the Hiroshima cheers since, and if he wants to in 2019, he has to get past Tomohiro Ishii. On purely sporting terms, this is an oil and water situation; Ishii is a big Hanshin Tigers fan, making Naito a natural rival. In ring, the two are radically different in approach, evenly matched in output, and guaranteed to tear each other apart. 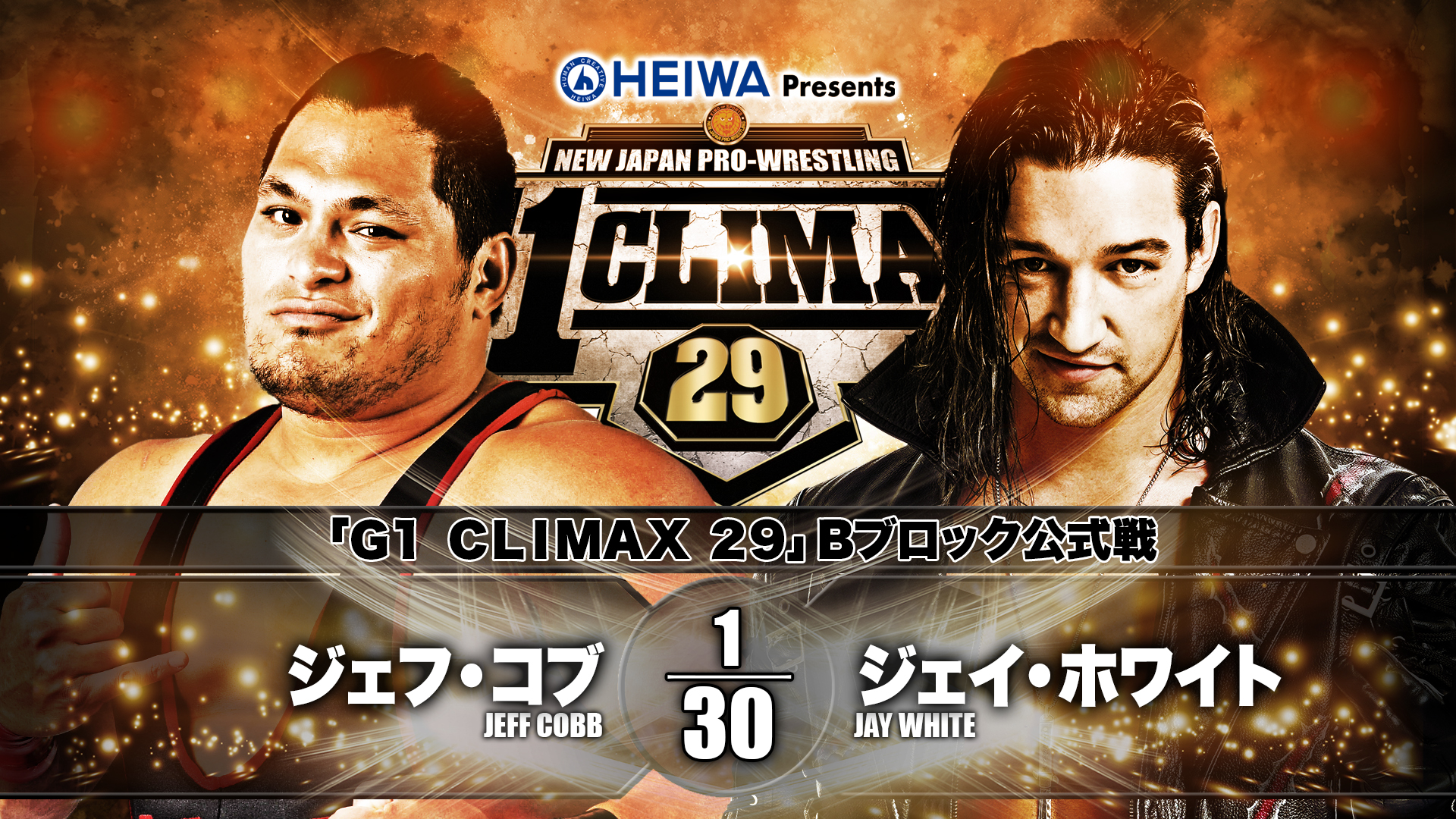 Is desperation sinking in on Jay White? He certainly seemed confident enough after July 20, practically daring Jeff Cobb to just try and throw him around wherever he pleased. The fact remains though, that at 0-3, White is not dead in the G1 water, but he is very much at the deadline for putting together his first win. With Zack Sabre Junior finally picking up his first two points against Bad Luck Fale at the weekend, White is, for the time being at least, 20th and dead last of all the G1 entrants.

Yet White proves to be at his most dangerous and effective when his back is against the wall. Jeff Cobb mustn’t let his own confidence after defeating Juice Robinson to get on the board get the better of him. 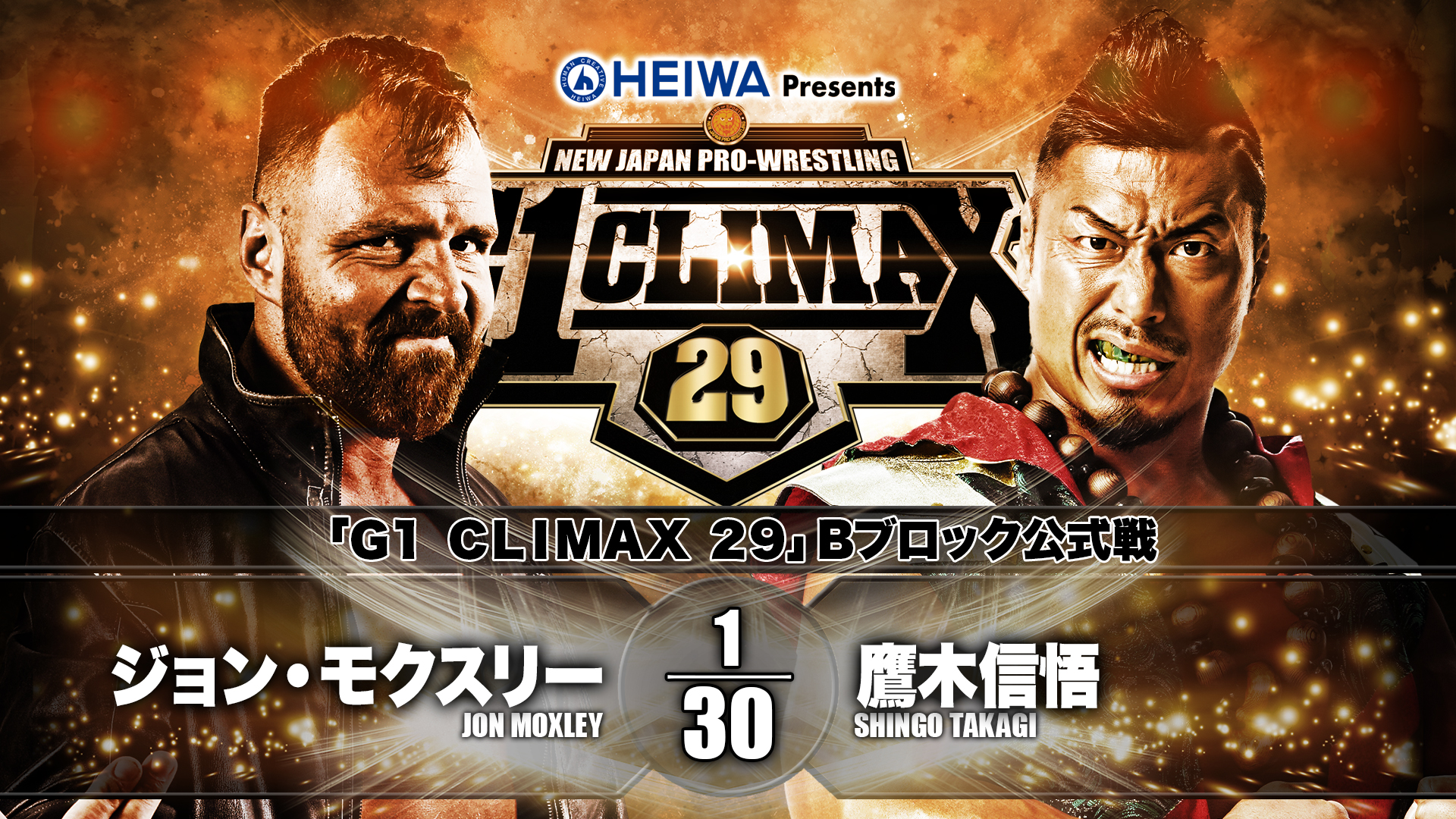 Jon Moxley and Shingo Takagi might be meeting in the ring for the first time, but they have met before out of it. Almost a decade ago, both were part of the same Kamiakaze USA stable in the Dragon Gate USA promotion, but just never tagged or faced off in a match. Takagi did spend time travelling with Moxley in the States however, the two sharing their experiences and forming somewhat of a bond.

Not unlike Moxley’s experiences with Juice Robinson in the US then, which might give a hint as to the kind of action to expect in Hiroshima. Takagi’s high impact style is close to Tomohiro Ishii’s, and Mox is just coming from an absolute war with the Stone Pitbull. Could the damage incurred through tables, chairs and brawls up and down stairs open the door for Shingo to hand Mox his first defeat in NJPW? 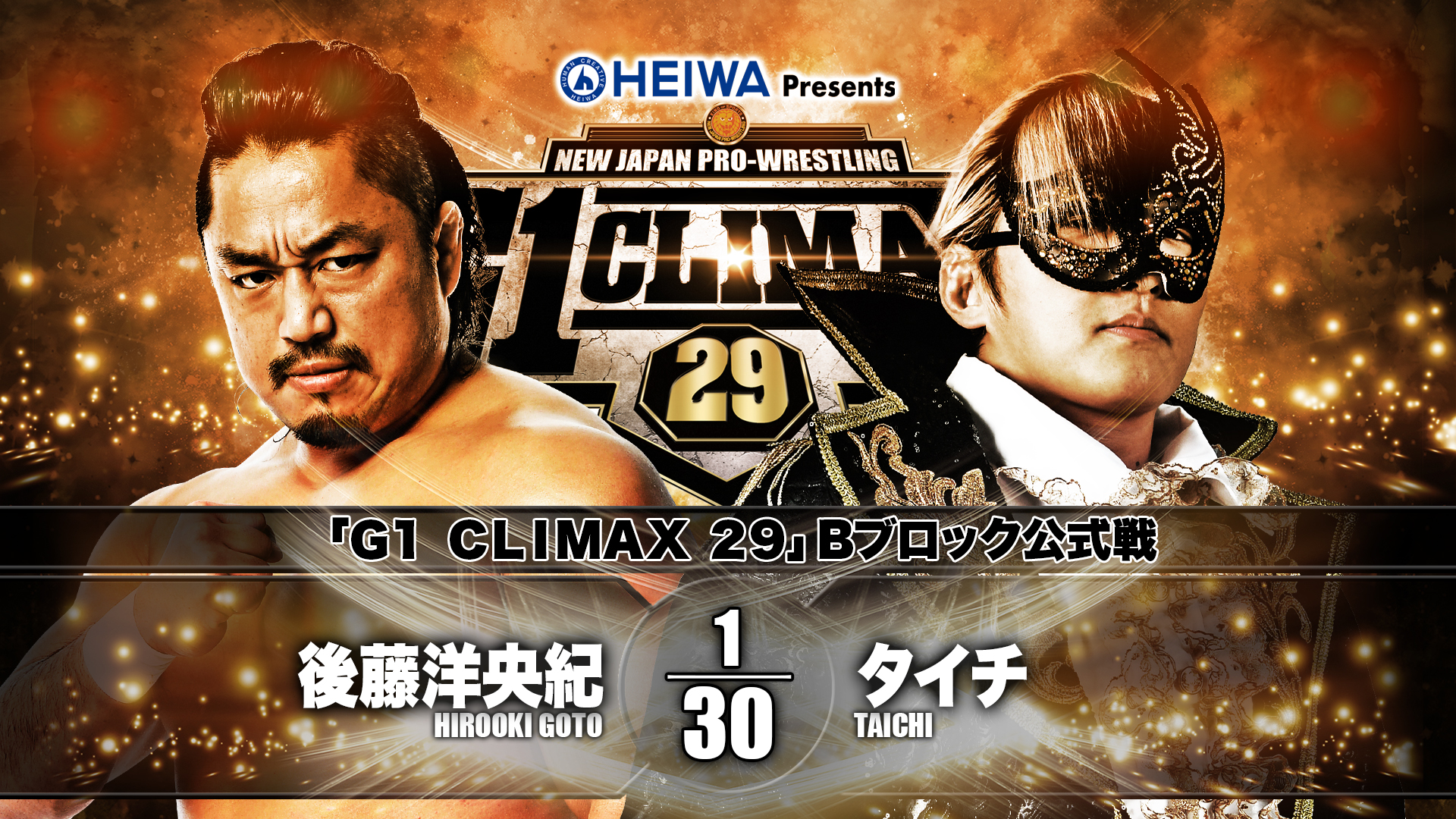 Taichi has spent the past week needling Goto, or ‘LaDojo’ as he seems to think the Fierce Warrior is called. Many of Taichi’s criticisms have been piggybacking off Naito’s, questioning whether Goto has really changed himself into a true G1 final worthy competitor.

Maybe Taichi has a point. Perhaps Goto was so hung up on chasing revenge over Jay White that he put all of his efforts into match one of the tournament, and once he claimed victory, he struggled to maintain momentum against Juice Robinson and Tetsuya Naito. Yet Taichi would do well not to let his own confidence get the better of him; already this proved to be the undoing of his first NEVER Openweight Championship reign last autumn when Goto seized the title back from the Holy Emperor mere weeks after losing it to him. Goto will be fired up to get back on the winning track in Hiroshima. 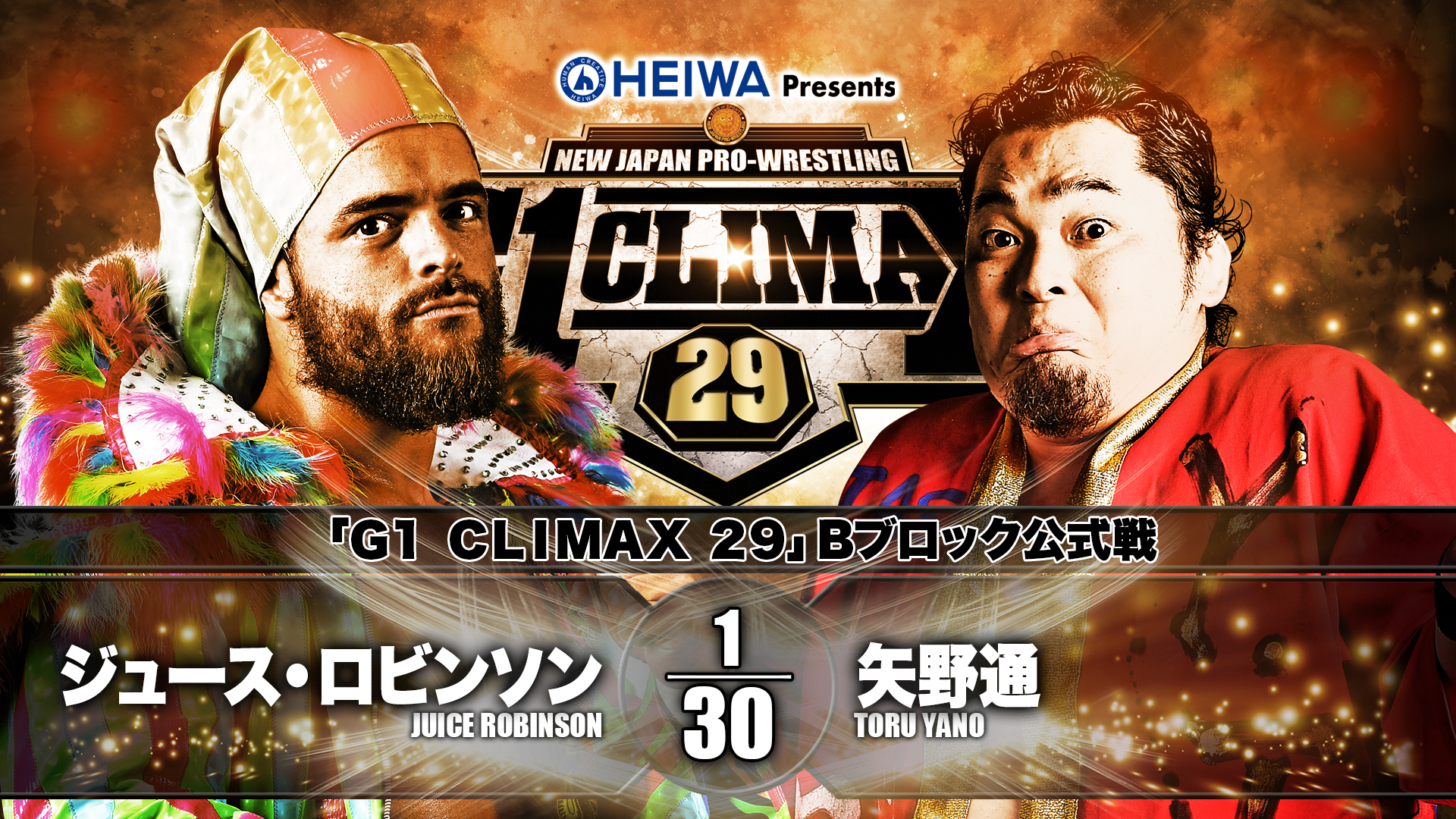 Juice Robinson and Toru Yano have met twice in the G1 Climax, and both times saw the same result; Juice scoring with Pulp Friction for an emphatic win. The form would suggest that Robinson moves to six points in Hiroshima.

Yet form is one thing that never applies to Toru Yano. The Sublime Master Thief has stolen wins from both Jay White and Tetsuya Naito already, and can easily pick up the W against another top B block contender this Wednesday. Juice has been driven during the G1, showing a harder nose and all business approach to his matches thus far. There is no doubt that he is looking ahead to the finals in the Budokan, and that may result in him missing a Yano shaped pothole in the road immediately before him.