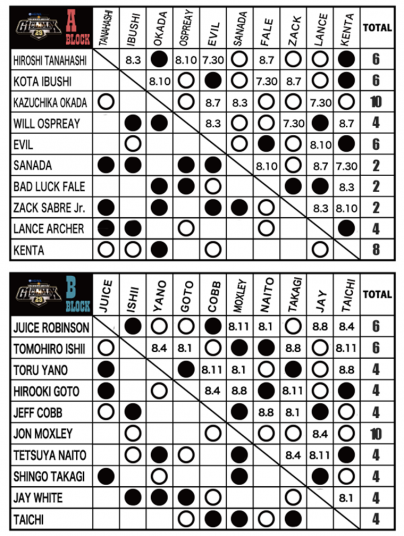 As G1 Climax 29 passed its half-way mark in Nagoya, the B Block was up for contention. Several competitors in the block would be happy with their performance this year, whilst others can only look back at what they would consider a miserable start to the tournament. In B Block however, one man loomed head and shoulders over the rest having been yet to be pinned or submitted in a New Japan ring. As the chasing pack tightened, Jon Moxley emerged as the clear front runner in the block. 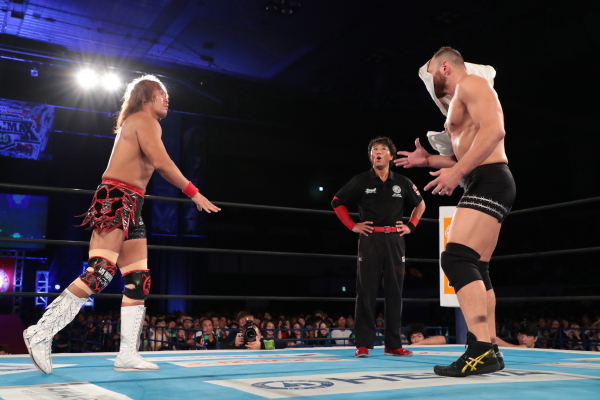 In a battle of the champions, the IWGP US Heavyweight Champion, Jon Moxley took on the IWGP Intercontinental Champion, Tetsuya Naito in a vicious battle where no quarter was asked and none given. Naito had been preparing for this upcoming challenge by playing mind games on Moxley. Moxley, who is known for his hot temper and irascible nature proved to be fertile ground for El Ingobernable’s brand of mischief. When ever the Death Rider sought to engage in a straight fight or to brawl with Naito, his opponent would slip in or out of the ring, mock Moxley with a tranquilo pose and generally got under his skin. Such a state of affairs could not last for long however, and eventually Moxley caught-up to Naito and the two started brawling outside of the ring with Naito bearing the brunt of Moxley’s rage. As Naito managed to fight back, his usual tactic of trying to make his opponent expose weaknesses through sloppiness seemed to have backfired as Moxley had instead become more dangerous, the more he was provoked. 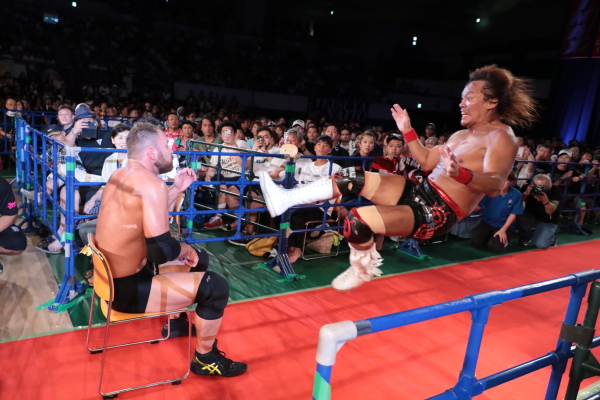 Naito attempted to counteract this state of affairs by instead leaning into his in-ring abilities. A torrent of elbows from Naito was met in kind by Moxley and managed to dodge a Regal Knee with a tornado DDT of his own. However, once Naito attempted a running Destino, it was easily countered by the Death Rider into a strong lariat. As their bout reached its exciting climax, the match dissolved into brutality as first Naito, then Moxley savagely bit their opponent. In the end, Moxley managed to land a double-arm DDT on Naito, who frantically kicked out at 2, only to be felled by a Death Rider in a scene similar to when Moxley earned his Championship in Ryogoku Sumo Hall. 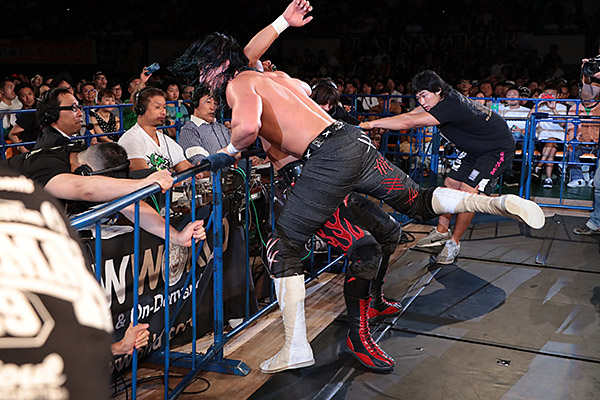 The match started with both men quickly finding themselves on the outside of the ring. As the opening scenes of the match played out, it seemed clear that Takagi had the advantage whenever the two found themselves inside the ropes, but once action spilled outside, it was White who was able to take advantage. White’s ruthlessness and lack of compunction about employing “inside work” as it is known in Japan, allowed him to weaken a man who was more than a match for him in terms of strength. Similarly to his bout with Jeff Cobb, White took every advantage he could to even the playing field. Despite referee Red Shoes Unno’s disapproval of his actions, White was looking strong and found himself in a position of advantage. 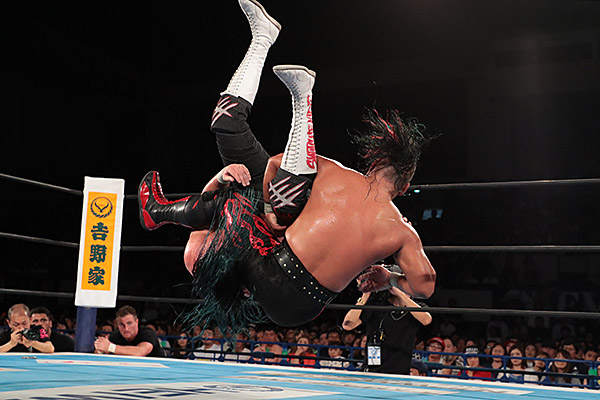 Once Takagi had recovered however, the two found themselves much closer to parity. Once he felt he had enough of an advantage over Takagi, White believed himself to be in a position to go toe to toe with the dragon in a strong-style match-up. This, in hindsight, was a mistake. This ill-advised period of bravado allowed Takagi to come back into the match and by the 10-minute mark, it was Takagi who was dominating his opponent. White’s experience advantage with the G1 and the heavyweight division in general though was his ace in the sleeve. As Takagi wore him down to the point where White was looking seriously in danger of being knocked out, he turned the tables (with a little help from Gedo it must be said). Having survived a vicious-looking MADE IN JAPAN, he used team-mate Taiji Ishimori’s signature move, Bloody Sunday before he finished Takagi with his own signature move.

Match 7: Jeff Cobb defeated Taichi with a Tour of the Islands 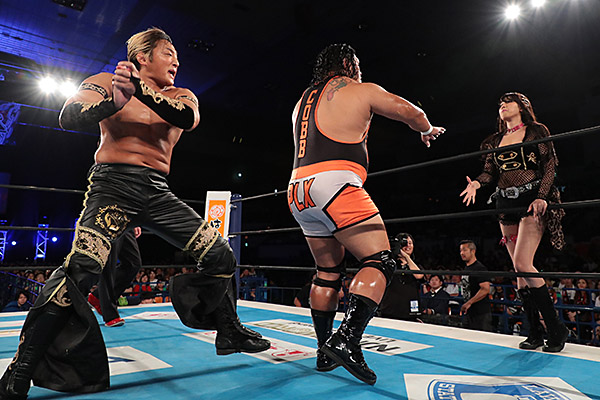 In a rematch of their title match in Fukuoka for the NEVER Openweight Championship, the two G1 debutants met in a match that could make or break either man’s tournament. Taichi started the match attempting to provoke Cobb by patting him on his belly (Taichi has a habit of mocking Cobb’s weight) and offering him a seemingly sportsmanlike handshake. Cobb, who has had experience dealing with Taichi’s shenanigans was wary but the handshake turned out to be genuine. Less sportsmanlike, however, was Taichi calling Cobb a fat pig, which understandable drew a reaction from his opponent. The two engaged in a thrilling exchange until Taichi rolled to the outside of the ring and gained the upperhand on his opponent through brawling and the ungentlemanly use of his valet, the diva Miho Abe. Taichi remained acid-tounged as always, constantly throwing barbs about Cobb’s weight and prodigious belly. 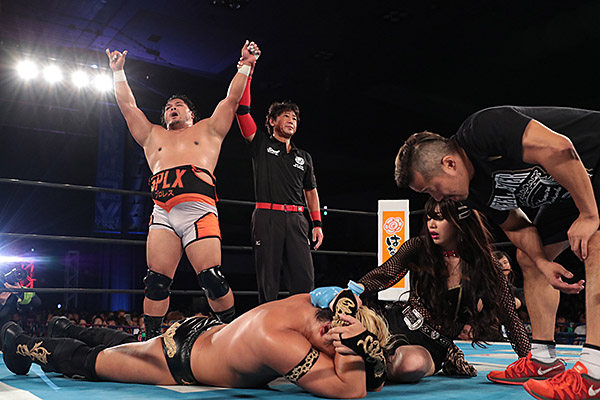 Cobb had finally seen and heard enough and returned to the ring and engaged in a strike exchange with Taichi. The holy emperor may be well known for his kicks, but has a habit of underestimating his opponent’s own offense as Cobb, being arguably the strongest man in G1 overpowered his opponent. Cobb seemed to realise this and attempted to rush his opponent with his finishing move, the Tour of the Islands, but Taichi managed to escape and counter the move every time. However, Cobb was now wise to a lot of Taichi’s offfense and had learned from their previous bout in Fukuoka and managed to block a particularly powerful kick and counter with a head butt. Lowering his shoulder straps, Cobb was fired-up with fighting spirit and finally landed his signature move. 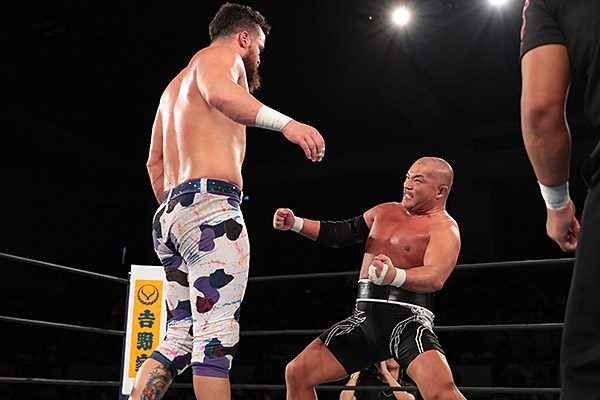 The match started with Robinson attempting to prove his strong-style credentials by going into a chop exchange with Tomohiro Ishii. Although often considered a mistake to do so, Robinson seems to be a somewhat changed man this G1 embodying Freudian concept of the Death Drive somewhat. Seeing his approach prove fruitless, Robinson returned to a more orthodox style and through it he managed to get the better of Ishii. By returning to his tried and trusted approach of lariats in the corner, canon balls and “Juice punches” he was able to get the better of Ishii. Whilst Ishii was able to come back from this sudden swing in momentum, it was clear that Robinson would need to fight the battle on his own terms if he was to emerge victorious. However, Robinson could not resist the temptation that he could best Ishii on Ishii’s terms and was once again drawn back into fighting a strong-style contest. 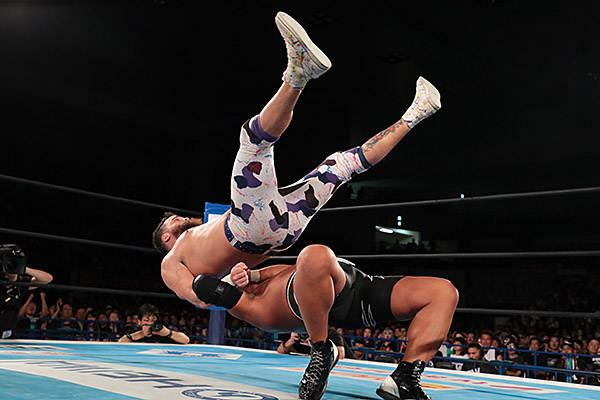 Robinson was certainly imbued with fighting spirit as Ishii, whose legendary chops and elbows have felled many opponent in the G1, struggled to keep the flamboyant one down. For each elbow and chop that would fell an ordinary opponent, Robinson was able to shrug off more than his fair share. Robinson was ultimately torn in two, between the temptation to fight Ishii as an orthodox wrestler and as a NJPW strong-style wrestler and it was this indecisiveness that proved his undoing as he ultimately failed to land “Pulp Friction” and instead fell to a vertical drop brain-buster. Food for thought for Robinson who remains in joint-second place behind Moxley. 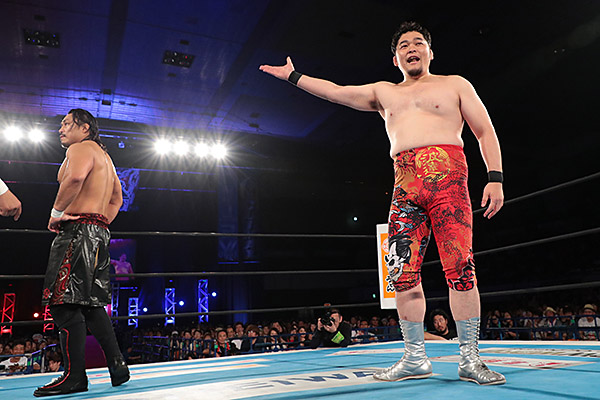 One man who doesn’t seem to be in two minds about his approach this tournament is Toru Yano. As the gong sounded, Yano encouraged the fans to chant “CHAOS! CHAOS!” and beckoned Goto to preen on the turnbuckle. As one might expect this was but a ploy to attempt a roll-up. Similar tactics came from Yano, looking for a quick win, but Goto employed his Goto-style roll-up and got the win over his stable-mate. 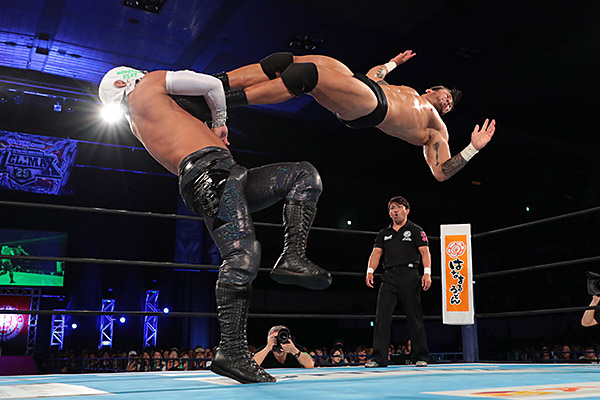 Given the tension between KENTA and Tanahashi earlier in the tournament, one would be forgiven for thinking that the red corner would suffer during match from a lack of unity. EVIL and Tanahashi, who meet in the main event in Kagawa on Tuesday, started off the match. Immediately it came apparent that L.I.J’s almost unconscious synergy would prove invaluable as L.I.J were each able to get their licks in on the Ace. SANADA and KENTA, who are also facing each other on Tuesday also faced-off where KENTA was able to hold his own against the Cold Skull. Young Lion, Fredericks looked strong, employing a single-leg Boston Crab against BUSHI, but again L.I.J’s teamwork was not to be outdone. With a little bit of help from his friends, BUSHI emerged victorious after his MX. 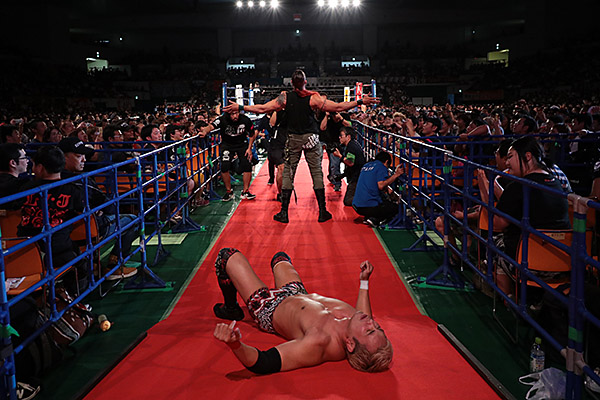 The match started with a display in technical wrestling from Sabre & Ospreay. Both men having been raised in a British-style of catch wrestling never the less had idiosyncratic takes on the formula leaving fans excited for their first NJPW singles encounter on Tuesday. Suzuki and YOSHI-HASHI were the next in the ring, but just as YOSHI-HASHI seemed to be holding his own, the match quickly degenerated into a brawl, where Suzuki-gun took full advantage. Archer’s sheer strength & power were an interesting contrast to Okada’s general all-round ability as the two squared-up in advance of their singles match. The match heated up and the action became fast & fierce. In the end the inexperienced Umino found himself isolated against Suzuki and Kanemaru where the two veterans taught the youngster a painful lesson in teamwork. 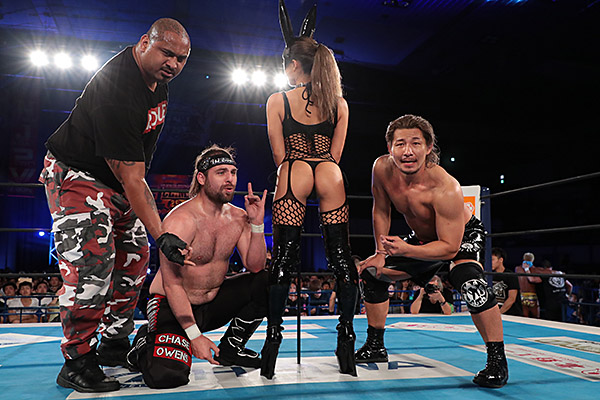 The match started with two competitors for the so-called C Block championship, started out in the ring with a series of hard chops and suplexes from Henare not only getting the better of Owens, but also Takahashi, who had intruded into the ring. Fale though was a different matter and the G1 entrant had no trouble taking down the Maori warrior. Never the less Henare put-up a superb display and showed a lot of promise. Ibushi and Fale briefly squared-up, scouting each other for their impending match of Tuesday, but once Honma got in the ring, BULLET CLUB pounced. With all three members working together, they were able to isolate Honma and emerge victorious once Takahashi hit his signature move. 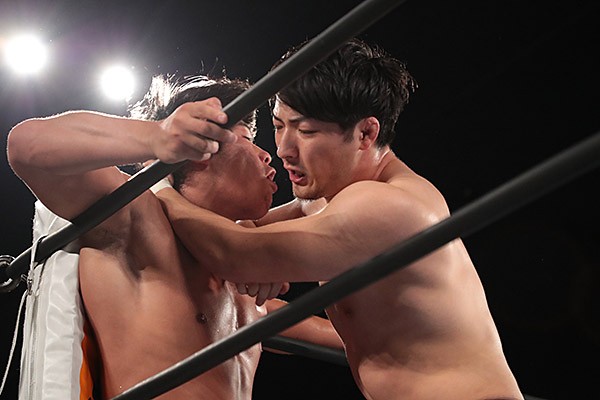 Despite a valiant display from Uemura, it was always going to be a tall order for him to defeat his upperclassman in Narita. Narita, who competed in the best of the super jr. 26 earlier in the year was able to isolate Uemura’s ankle. Uemura showed a lot of heart and fighting spirit, but Narita eventually pinned Uemura with a beautiful bridging suplex.