After the results of the August 8 event in Yokohama, the final card and match order has been determined for the last day of G1 Climax group matches on August 11 in the Budokan.

Who will make it to the final of G1 29? Here’s a look at what you can expect. 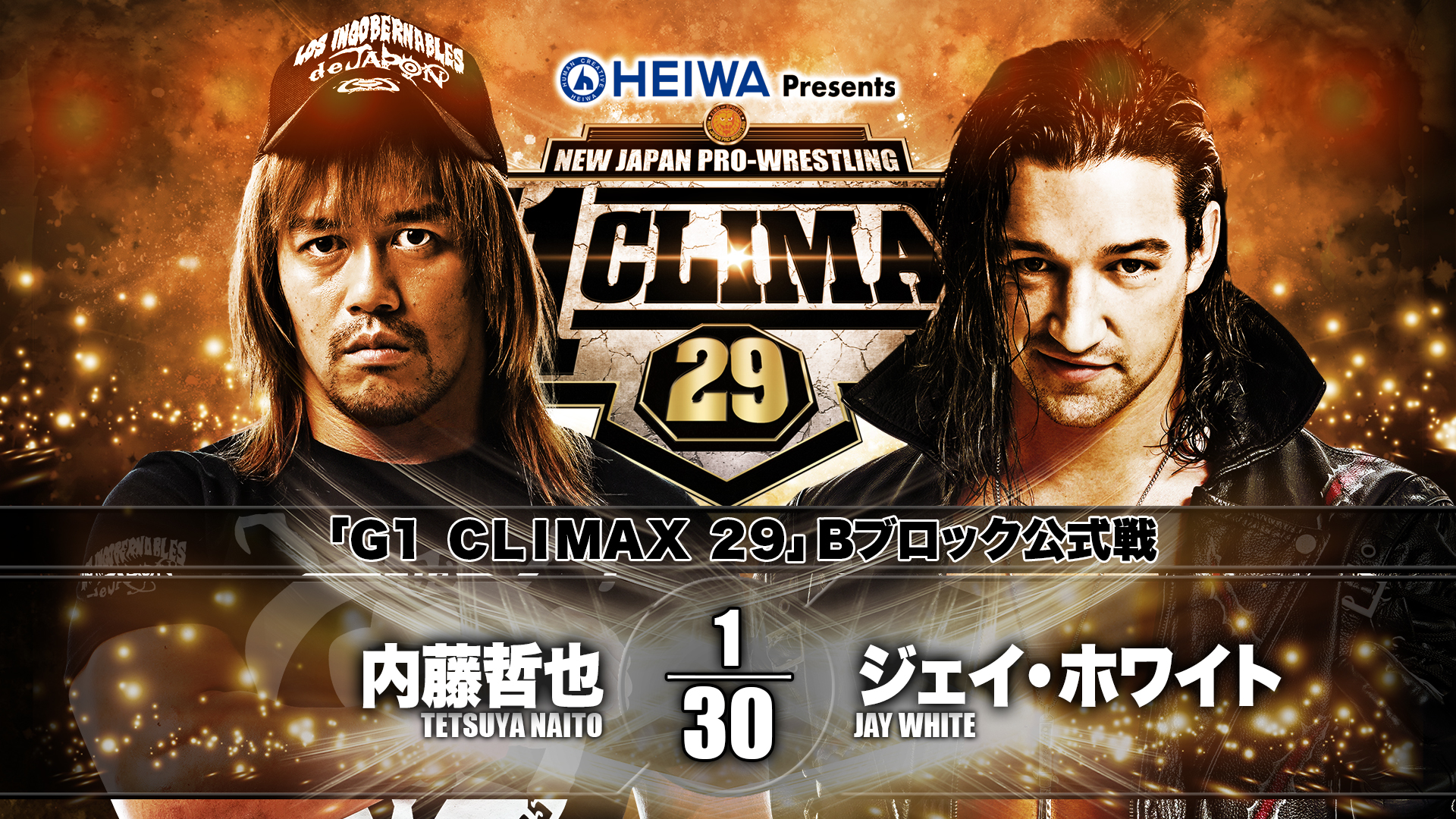 KEYS TO GLORY: If Naito wins, and Jon Moxley loses to Juice Robinson, he advances. If Naito and Moxley win, Naito needs Hirooki Goto to beat Shingo Takagi to advance to a three way tie.

If White wins, and Goto loses to Takagi, he advances.

Tetsuya Naito and Jay White has been an intriguing match to look out for long before we knew how much would be at stake on August 11. Set aside the fact the winner of this match could well meet either Kazuchika Okada or Kota Ibushi in the main event on Monday to determine the G1 Climax winner; this is also the first meeting of two men with much in common, though neither would admit as much.

Naito does admit to a certain amount of respect for Jay White. The Switchblade after all, managed to achieve a task Naito never could, winning the IWGP Heavyweight Championship before the age of 30 (a goal he achieved with four years to spare, no less). White sealed the win with a candour, frankness, and some might say, sheer mouth size that Naito shares.

In ring, Naito has spoken about disliking White’s style, and the Switchblade’s propensity for brutal attacks outside the ring. When inside the ropes however, both enjoy dictating the pace of the match and forcing their opponents to conform to them. The key here will be who can set that pace in the Budokan, a venue Naito has deep emotional ties to as a fan, but only poor memories as a wrestler, last year’s defeat to Zack Sabre Junior and elimination from the G1 28 running still burning in the memory.

KEYS TO GLORY: Hirooki Goto must win. If Jay White then wins in the main event, or if White and Naito go to a draw, Goto advances. If Naito were to win, he would need Moxley to beat Robinson.

Shingo Takagi is coming off one of the most electrifying matches of the G1 in Yokohama on August 8, with an immense victory over Tomohiro Ishii that did much for his personal pride, and happened to put Ishii out of the G1 running. Ishii, Takagi and Goto make up a triumverate of kindred spirits in B block, and now Takagi could emerge on top of that triangle, potentially spoiling Goto with a win.

As for Goto, he is in familiar territory. In 2016, his campaign hit a rough patch with a three match losing streak, but he would bounce back to stay alive into the last night of block action, winning his match, and reaching the final when Kazuchika Okada and Hiroshi Tanahashi went to a main event draw. Exactly the same situation then in 2019. Goto is living proof that you can never give up until the final bell on the final day of the G1 Climax. 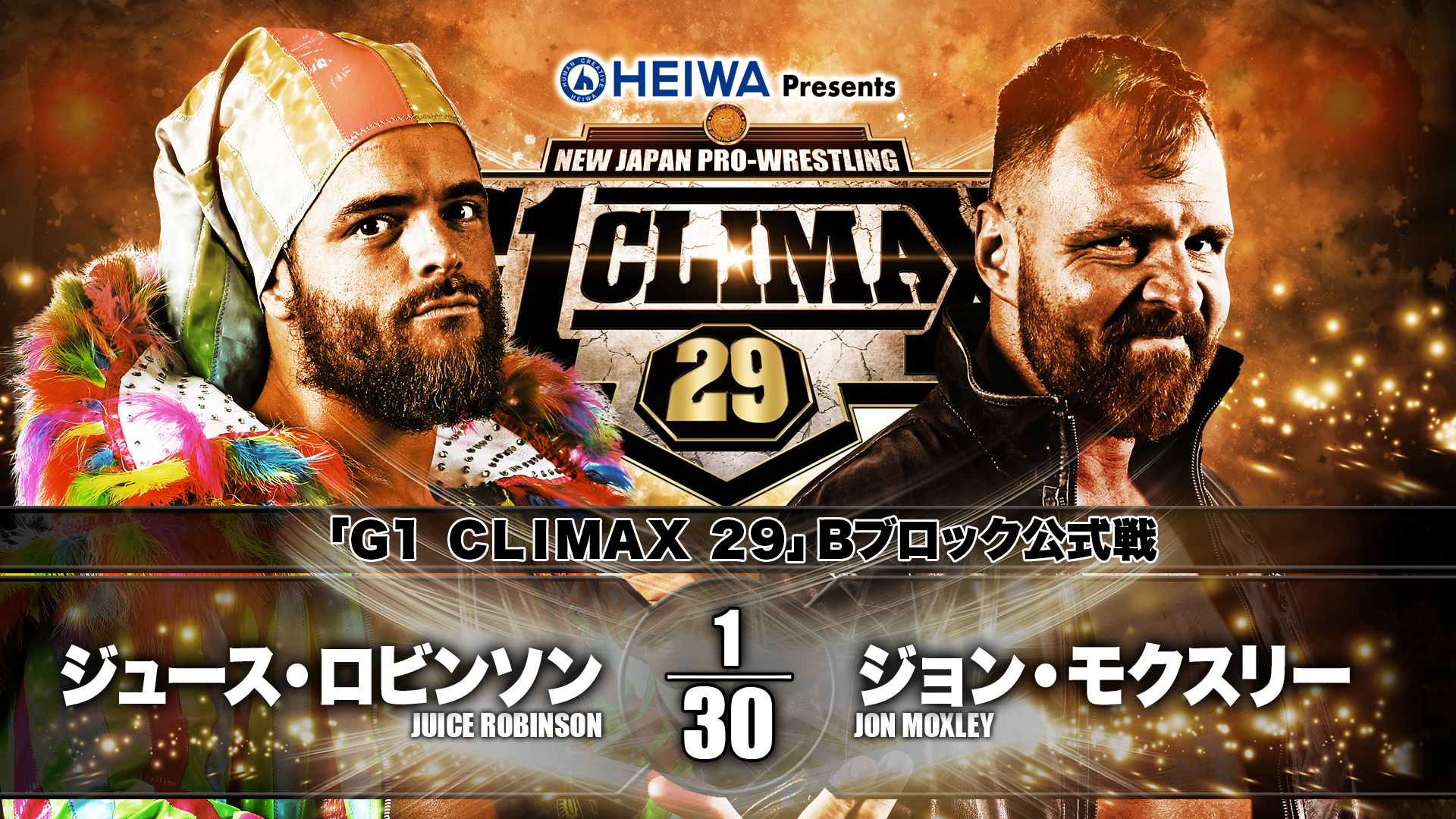 KEYS TO GLORY: Moxley must win. If he does, Naito beats or draws with Jay White, and Takagi beats Goto, Moxley will advance.

The last match of Juice Robinson’s G1 block campaign is the one he’s had his eyes on from day one. Revenge has been on the Flamboyant One’s mind since June 5, when Moxley made his shocking and brutally violent debut, fighting with Robinson all over Sumo Hall before taking his IWGP United States Championship.

It was a transformative experience for Juice, the usually outspoken Robinson rarely giving more than a few words to the press since. He would approach the G1 with a new focus and new level of violence. It was an approach that saw him score some impressive wins, but it was never clear whether Juice was fighting to get to the Budokan finals, or whether he was fighting to get to Mox, and prove powerful points along the way.

For Moxley, the G1 has been about proving powerful points. The IWGP United States Champion had the second fastest start in a debut G1 year in history, winning his first five matches. That was before a Toru Yano shaped spanner found its way into the works, and Jay White compounded matters by handing the Purveyor of Violence his first NJPW pinfall loss. Then in Yokohama, Hirooki Goto kept himself in the running by beating Moxley in under ten minutes. The G1 Climax is truly a marathon, not a sprint, and Moxley needs a powerful second wind and to break out of his three match losing streak if he wants to be in the final. 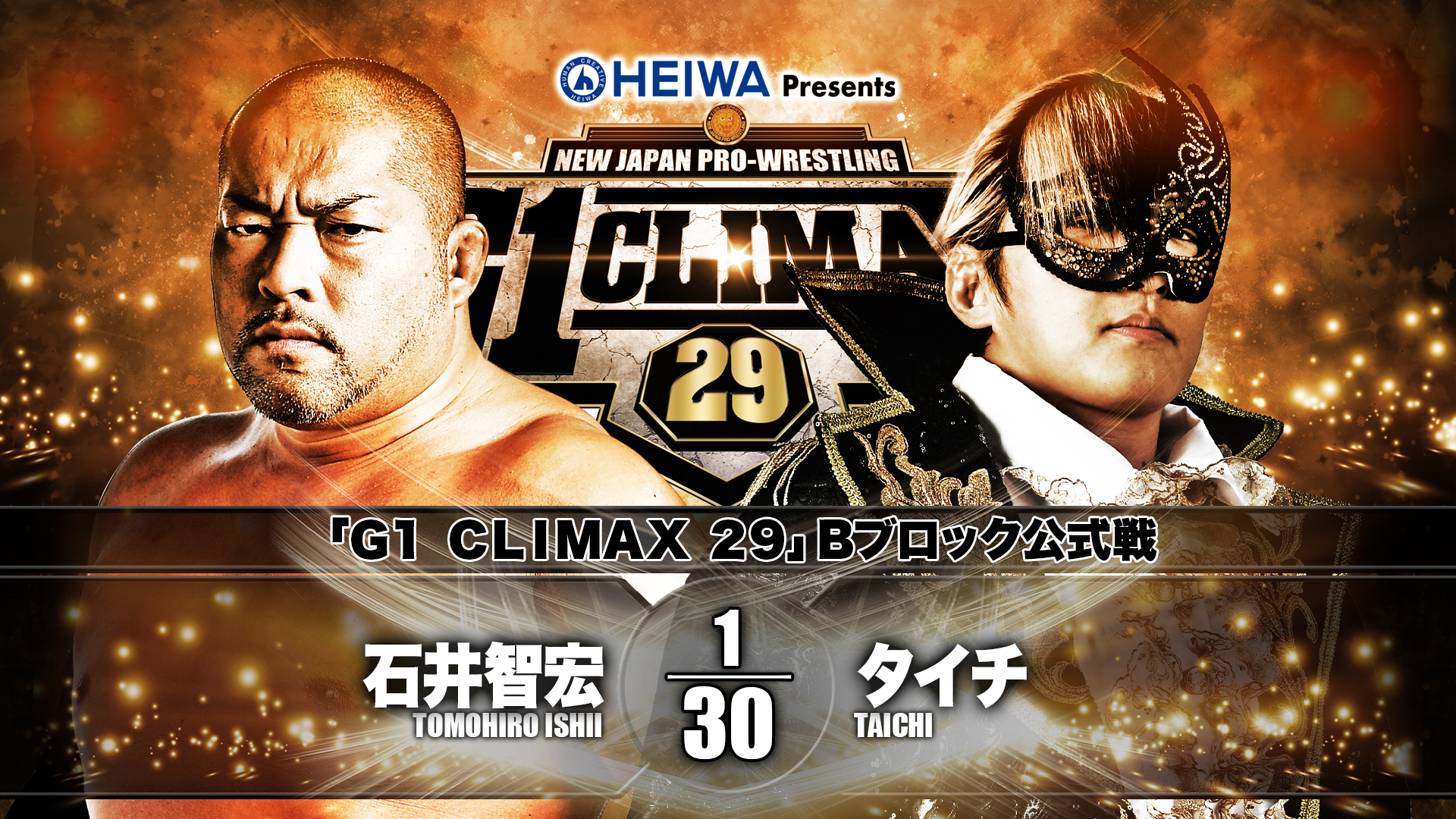 Ishii’s G1 effectively came to an end on August 8 in Yokohama after his loss to Takagi. That must be a crushing disappointment to Ishii, but not something Taichi will revel in either; there’s no doubt that Taichi wanted to be the one to hand down the loss that ended the Stone Pitbull’s run.

The stakes in this one are all personal, then. Taichi and Ishii wrestle for the third time this year, and the fifth time altogether. Ishii brings a lot of personal pride from Taichi, a fighting spirit that isn’t always present in his regular matches. Taichi bears a lot of resentment for the man that came to New Japan at the same time as he did, a fellow ‘Black Saint’ who entered the promotion from outside, but who shot to fame and adulation over time while Taichi never got the respect he felt he deserved. If Taichi were to finally get a win over Ishii, it might not make any difference to the G1 rankings, but it would mean everything to the Holy Emperor. 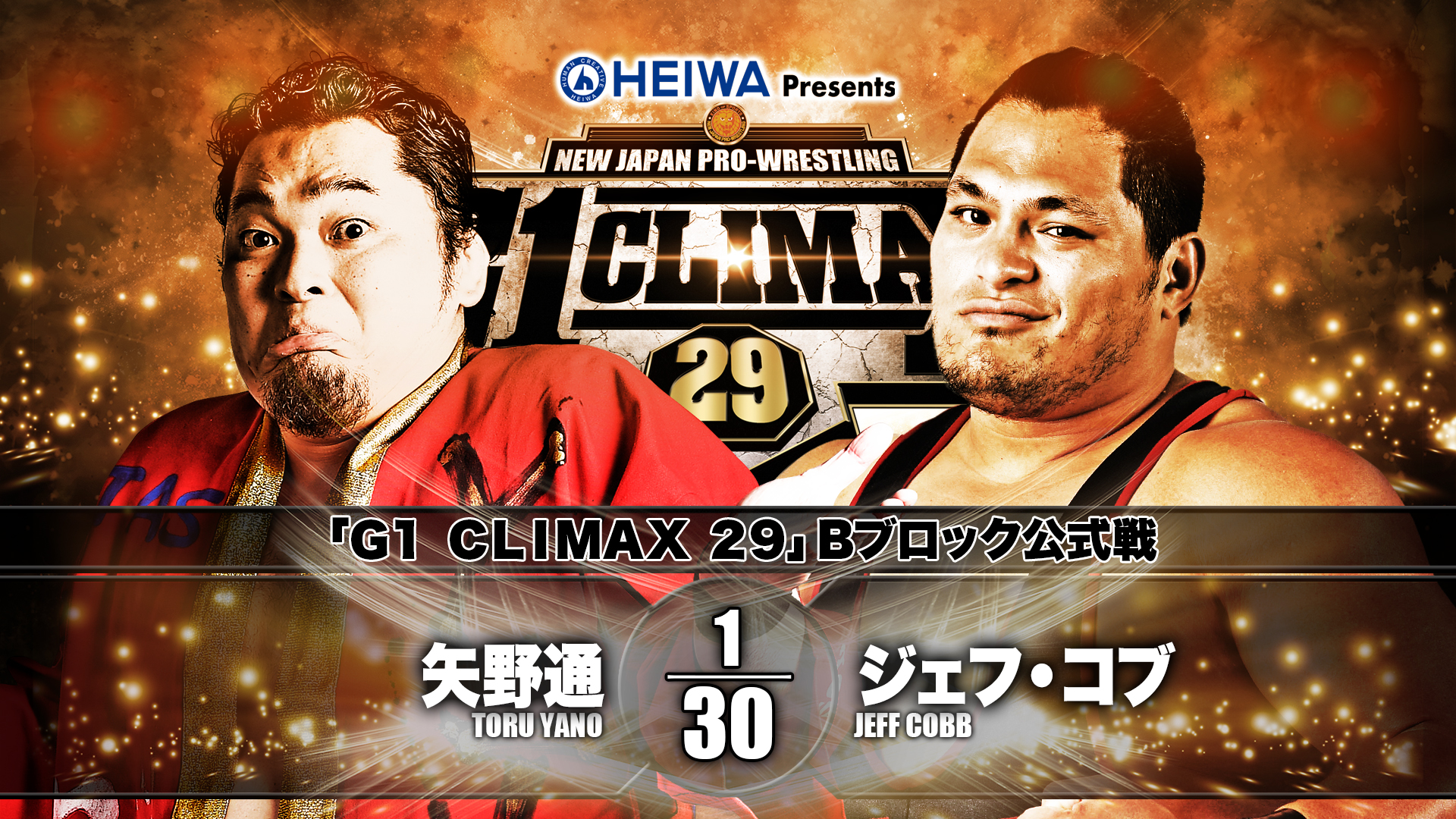 Toru Yano’s eight points in the G1 is entirely respectable enough, but outright impressive is the list of names he’s been able to defeat. Jay White, Tetsuya Naito, Jon Moxley and Taichi have all fallen to the wily Yano, who has managed to out maneuver the best of them even if he has bent the rules on a few occasions.

Could he do the same to Cobb, a man who ‘weirds him out because we look the same’? Or will Yano’s pride take him back to his collegiate days and see him outwrestle the former Olympian? Cobb has had some impressive performances this G1 but his win:loss record needs some help, and he’ll be looking to finish on a high.

In the fourth match of the evening, YOSHI-HASHI, Will Ospreay, Hiroshi Tanahashi and Kazuchika Okada will face Yoshinobu Kanemaru, Minoru Suzuki, Lance Archer and Zack Sabre Junior. Toa Henare, Tomoaki Honma and Kota Ibushi will meet KENTA, Karl Fredericks and Clark Connors in the third bout. BUSHI, EVIL and SANADA will meet Chase Owens, Yujiro Takahashi and Bad Luck Fale in the second match, and the opener will see Ren Narita and Shota Umino against Yuya Uemura and Yota Tsuji.