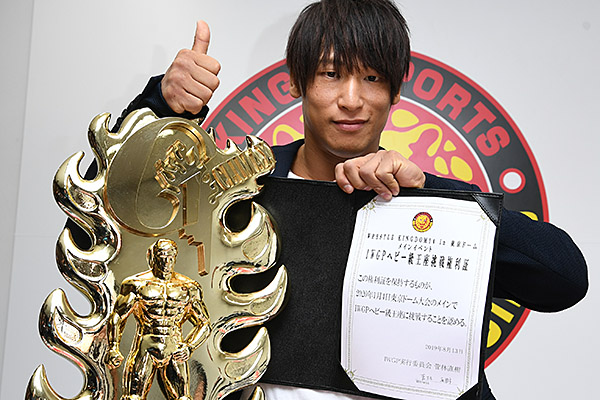 A day after winning the G1 Climax for the first time on Monday August 12 in the Nippon Budokan, Kota Ibushi delivered a press conference to assembled media in Tokyoto discuss his historic victory.

Before Ibushi delivered his statement, NJPW Chairman Naoki Sugabayashi announced the full card for the upcoming Royal Quest event in London’s Copper Box as well as the full bracket for Super J-Cup 2019.

Sugabayashi then signed the contract Kota Ibushi earned as G1 Climax winner, a guarantee of an IWGP Heavyweight Championship match on January 4 2019 in the main event of night one of Wrestle Kingdom 14 in the Tokyo Dome. 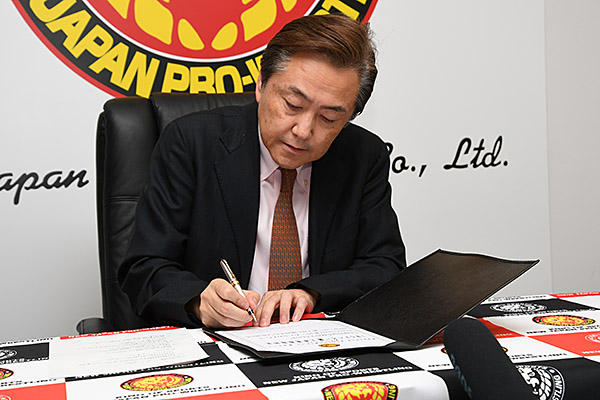 Ibushi then delivered his statement to the press. 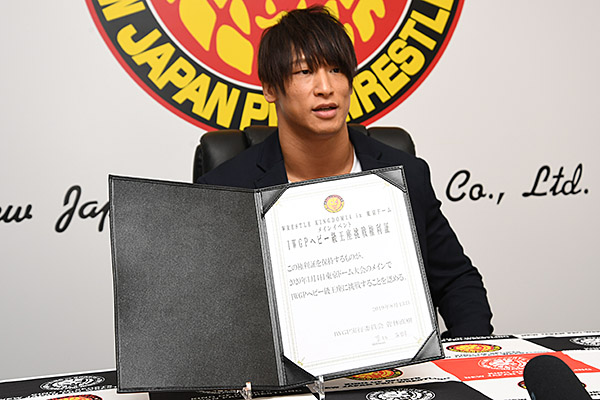 ‘Of course I accept and will use this contract. But I have one proposal. We have events in the Tokyo Dome on January 4 and 5, but I still have an attachment to the IWGP Intercontinental Championship. How about, if I win the Heavyweight Championship on January 4 and then challenge for the Intercontinental Championship on January 5? Whoever it may be. I will of course defend this right to challenge against KENTA and EVIL who beat me during the G1. That’s it, that’s my suggestion.’ 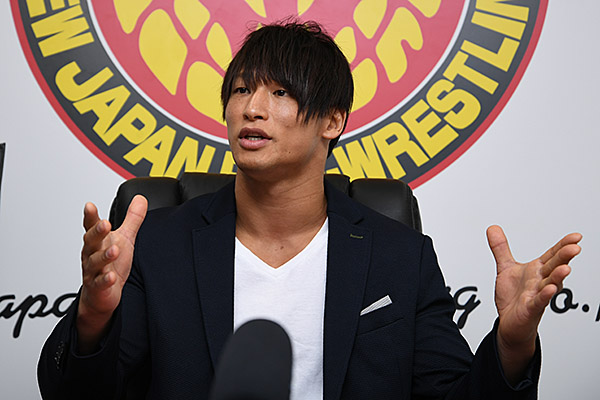 Ibushi: I’ve had lots of congratulatory calls and lots of nice messages. It isn’t like my outlook on the whole world has changed. My work starts now, and it’s all about what I do from here on out.

–Do you feel that your win has made a bigger impact than anything else you’ve done in your career to date?

Ibushi: I think so, yes. More than any title I’ve had in my career, I’ve had more people get in touch with me over this.

–You suffered an ankle injury early in the G1. How was the experience of the last month for you, physically and mentally?

Ibushi: It’s all been tough on the body, but more than that, I feel I’ve grown spiritually and mentally. There’s been a lot to get over for me personally. The mental effort has been far greater than the physical for me.

–Hiroshi Tanahashi has said theat ‘with Kota Ibushi here, the future of professional wrestling is safe’. Shinsuke Nakamura has said ‘Ibushi has a special meaning to the wrestling world.’ Your thoughts on those words with the G1 win in mind?

Ibushi: They’ve been a tremendous influence on me. I have to take that influence, and the success that’s created and keep going. Take what I’ve learned and arrange it into something I can use for myself, something new.

–Do you think you’ve lived up to their expectations of you?

Maybe answered a little bit, not all the way. Again, that is work that will take time. I won’t give up.

–Why did you propose the idea to challenge for both titles in the Tokyo Dome?

Ibushi: Certainly nobody has held both titles at the same time. So there’s the possibility to be the first. Plus, the Intercontinental title is one I feel responsibility for and I don’t want to give that up.

Ibushi: There’s an order and reasoning to it for me. I’ve challenged for the heavyweight championship before and didn’t win. I managed to win the Intercontinental first. So heavyweight is the next step and the championship I want next.

–It would be incredibly demanding to have two title matches in two nights in the Tokyo Dome. You don’t want to wait?

–Would it mean something special to you, to do this at the Tokyo Dome?

The focus of the entire wrestling world will be on the Tokyo Dome that weekend. With so many people there, that would  be huge. Nobody who could possibly repeat that feat. No other wrestler on the planet.

–Is there a message to Tetsuya Naito in your suggestion there? Obviously he’s the first person everyone is thinking of.

Ibushi:…A little bit of a message. And my imagination.

–The right to challenge contract you won in the G1 is for the heavyweight championship, not Intercontinental…

Ibushi: It’s just a suggestion for now. If it doesn’t happen that’s the way it is. I appreciate your consideration.