The Destruction tour wraps up in Kobe this Sunday with an Intercontinental Championship main event, a true heavyweight singles clash and the culmination of the Young Lion Cup!

Watch all the action from Kobe World Hall LIVE and in English on NJPW World! 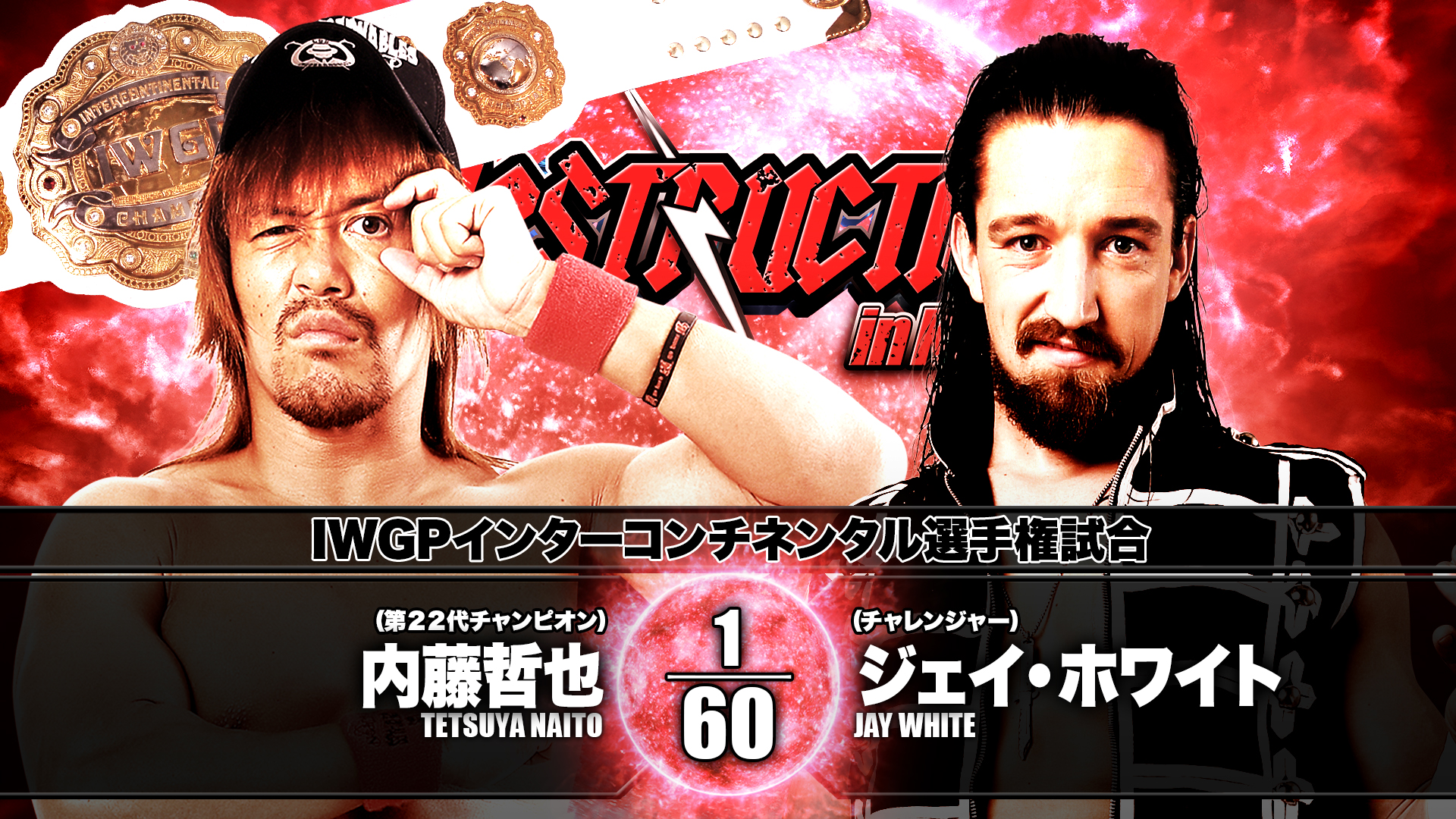 One of the most intriguing factors of the Road to Destruction has been the relationship between Jay White and Tetsuya Naito playing out over two weeks of preview tag matches. When it comes to the results, things have been overwhelmingly in Naito’s favour, a string of successes for Los Ingobernables De Japon, with White seemingly constantly frustrated. Post match attacks have seen the Switchblade constantly try to redress a score. His measures seemed like closing the barn door after the horse had bolted; assaults after the bell even ended with White momentarily taking possession of the Intercontinental Championship belt itself at one point, but the record books are what they are.

For all that, White has consistently remarked on how much he’s been enjoying the tour, his post match ebullience each night indicating that there is something the Kiwi knows that Naito doesn’t. That would be in keeping with White’s record in Kobe after all; it was one year ago that the Switchblade triggered the first step in his plan to take over the lead of BULLET CLUB, attacking Kazuchika Okada and joining forces with Gedo.

Naito has his own track record in Kobe, however. Undefeated in five singles matches in the city, Naito has successfully defended both the NEVER Openweight and IWGP Intercontinental Championships in Kobe in the past. Going back to a watershed singles win over Katsuyori Shibata at destruction 2015, Naito has a destined connection to World Hall. Can this be the venue when he steps closer to his destino of double gold in the Tokyo Dome? Or will it be White seizing that destiny for himself? 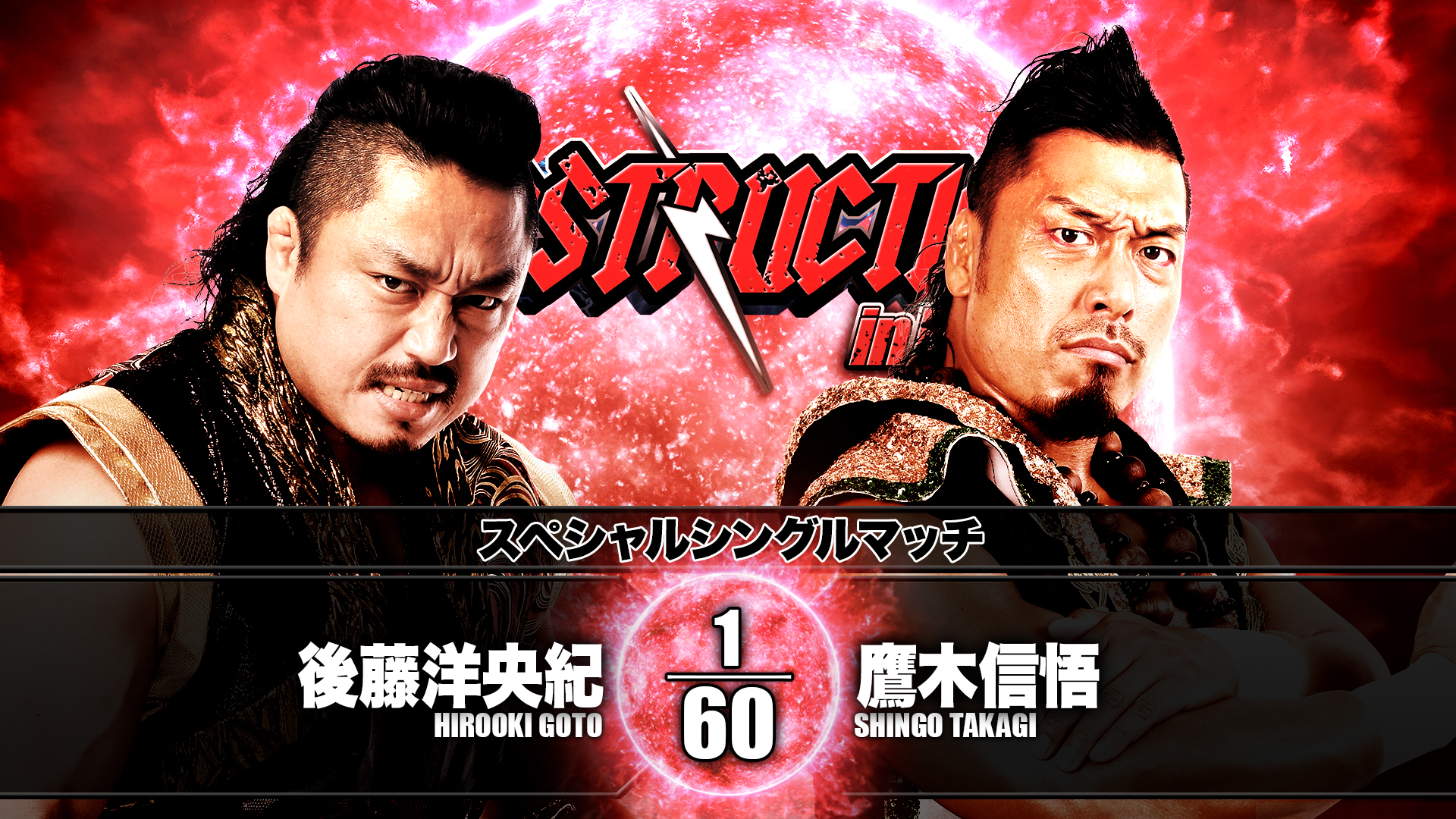 The semi main event in Kobe sees Shingo Takagi take on Hirooki Goto in his first singles bout as an official heavyweight. When he defeated Goto in the Nippon Budokan on August 11, he put paid to the Fierce Warrior’s chances of making the G1 final, and instantly declared himself as a heavyweight competitor, a move that, he said, was designed to ‘remove any doubt, any excuses’ about his performance. Ever since, Takagi has been bullish about beating Goto again in Kobe and going on to challenge for a singles championship; he was equally bullish in his move choices, deciding to take some cues from Goto’s moveset, right down to Ushigoroshis and GTRs.

Goto is justifiably furious with Shingo looking past him, and has much to prove at Destruction. Goto’s G1 saw a redemption of sorts, as the first half of his year was distinctly lacking when it came to results. Following a strong run of results in the summer tournament could see Goto in a stronger position for the Tokyo Dome in January, but that autumn campaign starts with a man who’s been able to call the Kobe World Hall crowd his own for years in Dragon Gate.

With their IWGP Heavyweight Championship match coming up on October 14 in Ryogoku, Okada and SANADA have been engaging in a game of one-upmanship all through the Road to Destruction tour. They’re sure to thrill the crowd again in Kobe, but what intrigues most is Okada’s partner.

In the main event of Destruction in Kagoshima, Kota Ibushi endured intense punishment from KENTA from before the bell even sounded. BULLET CLUB’s new member would viciously assault Ibushi’s head and then his ankle and knee, but Ibushi refused to give up. A pair of Kamigoyes gave Ibushi the win in front of his hometown crowd, but he wasn’t allowed any time to rest.

EVIL made his way to ringside immediately after the match and took hold of a microphone to tell Ibushi that he would take the Tokyo Dome IWGP contract and ‘shroud the main event in darkness’. Ibushi was happy to rise to EVIL’s challenge ‘anytime, anywhere’; when and where that match will take place is still unclear, but we will get a preview of that bout in Kobe as Ibushi joins a trio of Robbie Eagles and his potential Tokyo Dome opponent Okada against the Los Ingobernables De Japon team of EVIL, BUSHI and SANADA. 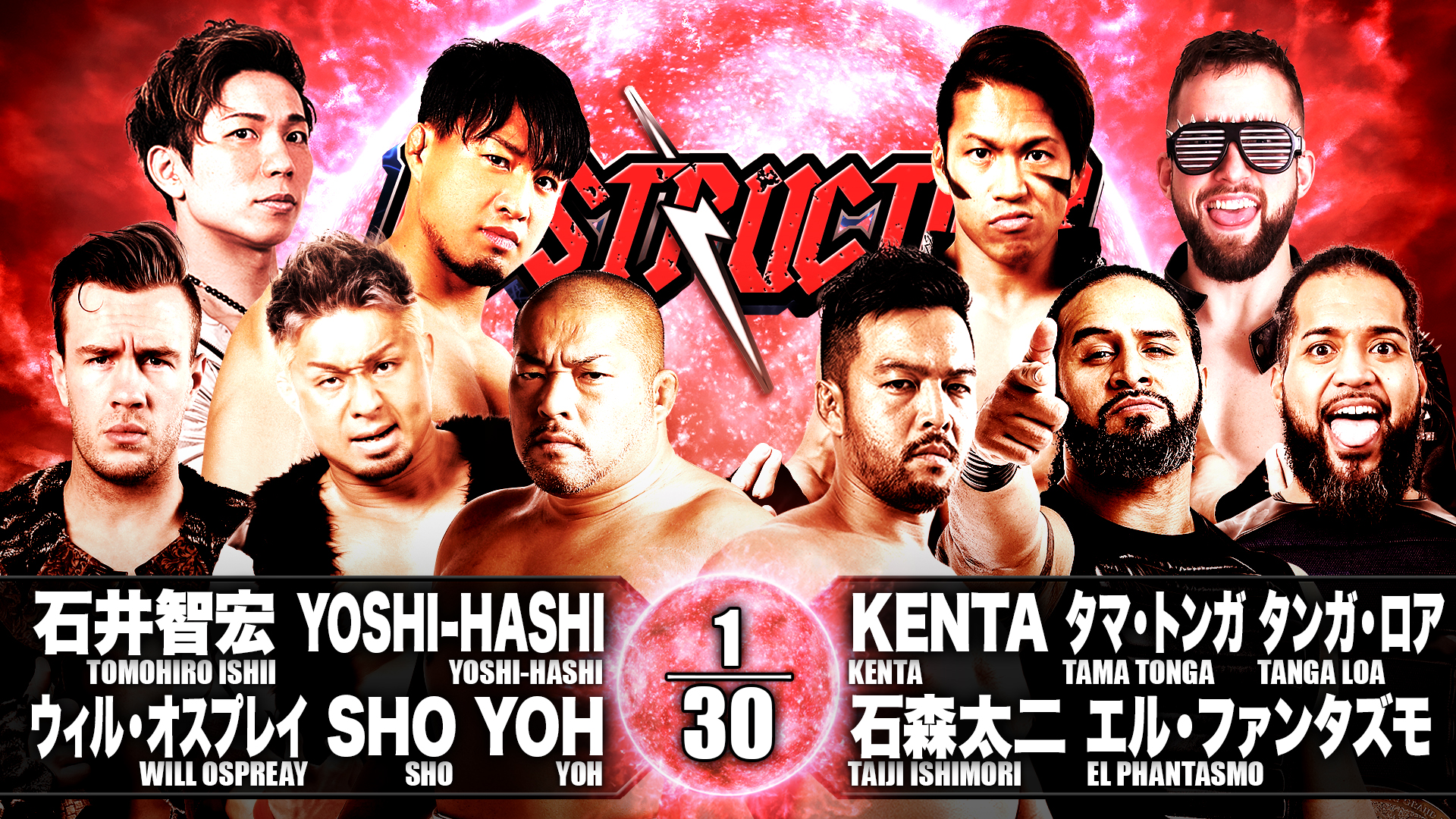 Also in Kagoshima, the Guerrillas of Destiny thought they had their eight man tag match opposite CHAOS in full control with YOH isolated in the middle of the ring. YOH suddenly surprised Tama Tonga however, catching the IWGP Tag Team Champion in a cradle for the three count. Post match, GoD viciously assaulted YOH with kendo stick shots and a Magic Killer. In Kobe, YOH and partner SHO seek redemption, as they combine with Will Ospreay, YOSHI-HASHI and Tomohiro Ishii opposite a BULLET CLUB five man side. There’s also added incentive for Roppongi 3K, as this new matchup puts them opposite the team they lost the IWGP Junior Heavyweight Tag Team Championships to back in June in the form of El Phantasmo & Taiji Ishimori.

Ishii and YOSHI-HASHI will also be gunning for GoD meanwhile, as their IWGP Tag Team Championship hopes were dashed last Sunday in Beppu by the interference of KENTA. When the Guerrillas tried to return the favour for KENTA during his main event with Ibushi in Kagoshima, Ishii and YOSHI-HASHI hit the ring and evened the odds. It all makes for what should be a violent ten man clash. 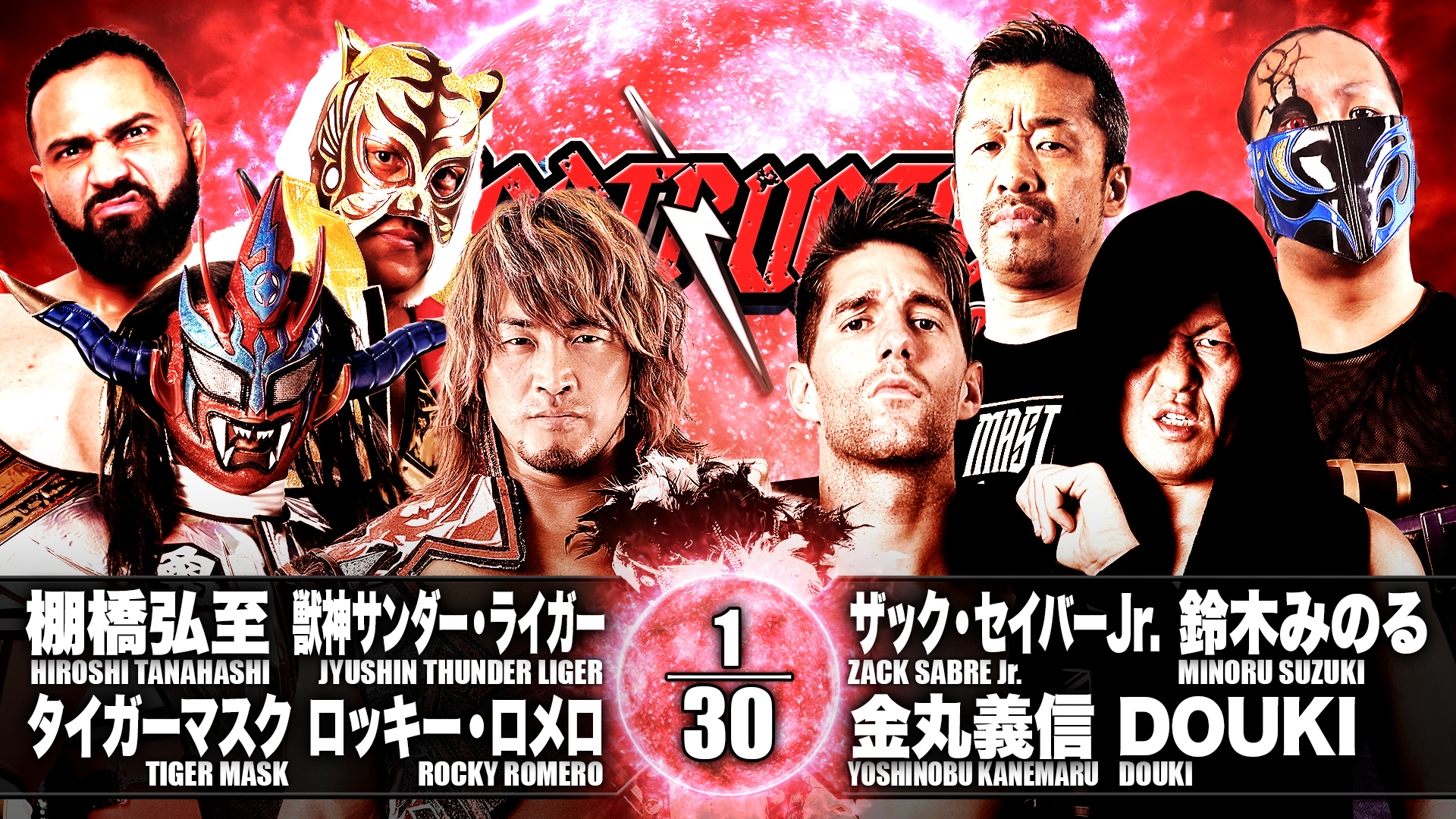 In the fifth match, all eyes will be on Jyushin Thunder Liger and Minoru Suzuki. In Kagoshima Monday night, Suzuki ripped the mask off of Liger and took it backstage in his teeth, like a wild animal with its slain prey. Suzuki supposed afterward that Liger had lost his soul long ago, and that it was all wrapped in his mask and body suit.

The furious Liger would roar that Suzuki had crossed the point of no return. He may not have the singles match he has been asking for in Kobe, but Liger and Suzuki’s meeting here will be vicious, violent and deeply personal. 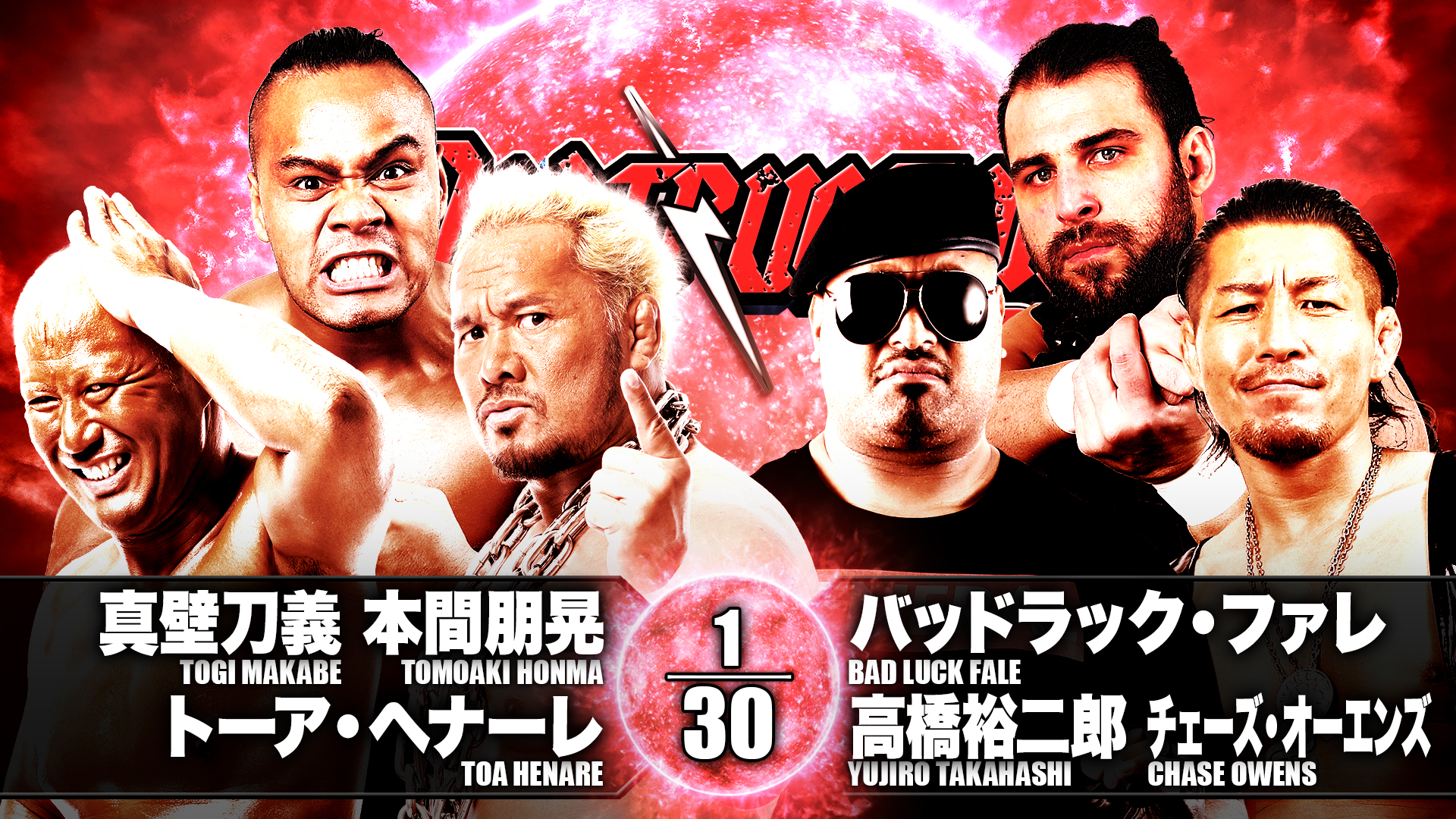 A theme for Toa Henare throughout the Destruction tour has been his distaste for Chase Owens in general, and his Package Piledriver in particular. Both he and Honma have been on the receiving end of the move several times throughout the tour, and Fale has been doling out Grenades to boot. As Henare continues to seek a way to the next level of competition in NJPW, Owens has consistently been forcing it shut, and the BULLET CLUB trio will look to keep it that way in Kobe.

The second and third matches of the evening will see the culmination of the Young Lion Cup. 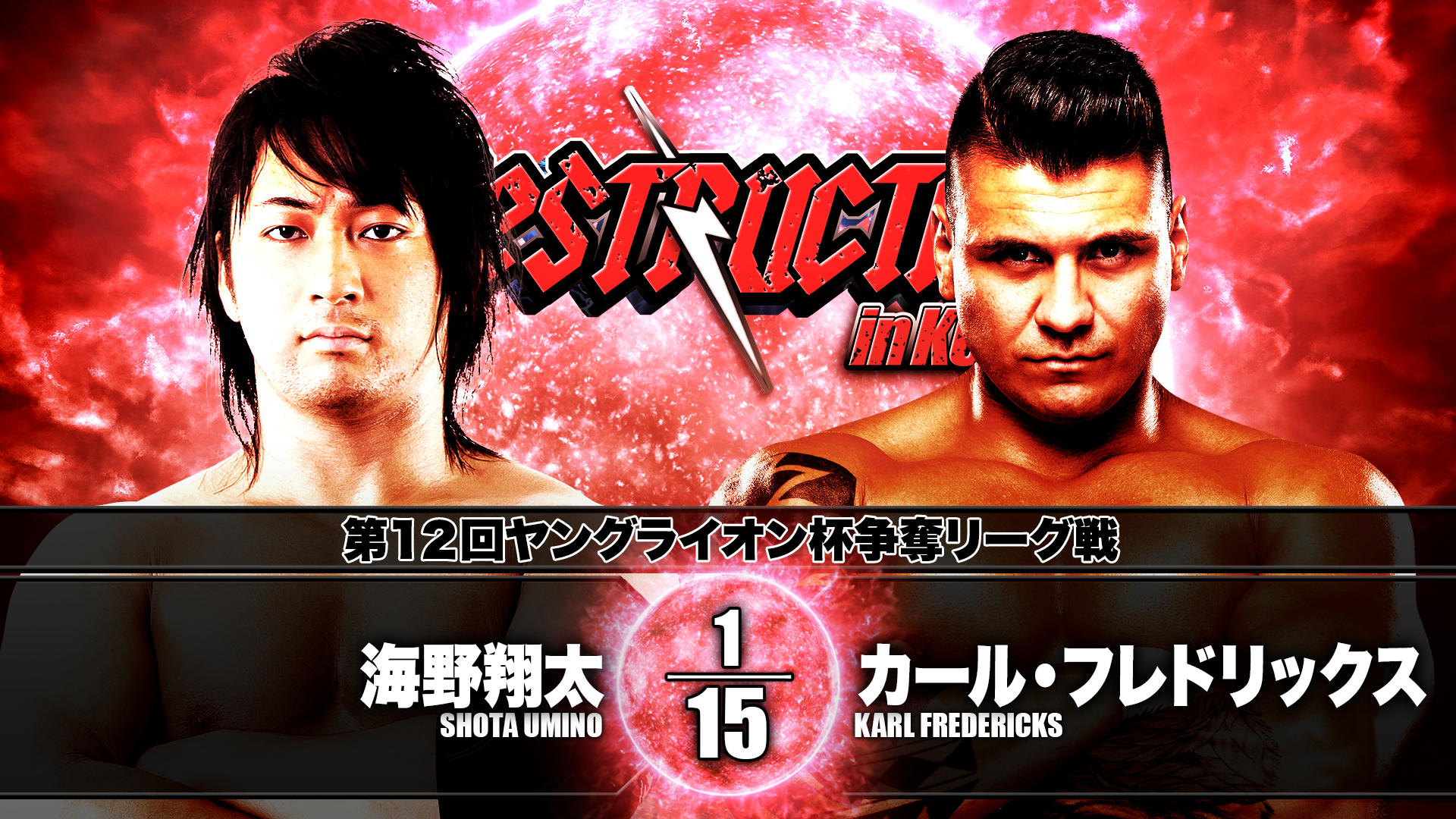 After two weeks and 26 matches, the Young Lion Cup will come down to three men; Karl Fredericks, Shota Umino and Ren Narita. All three sit on 10 points, with the distinct possibility of at least a two man tie. Narita has beaten Fredericks but not Umino; Umino has beaten Narita, and we don’t know what this match will bring. Umino’s fate is in his hands; if he wins, then he wins the league, while Fredericks will need for Narita to lose or draw if he’s to have a chance. 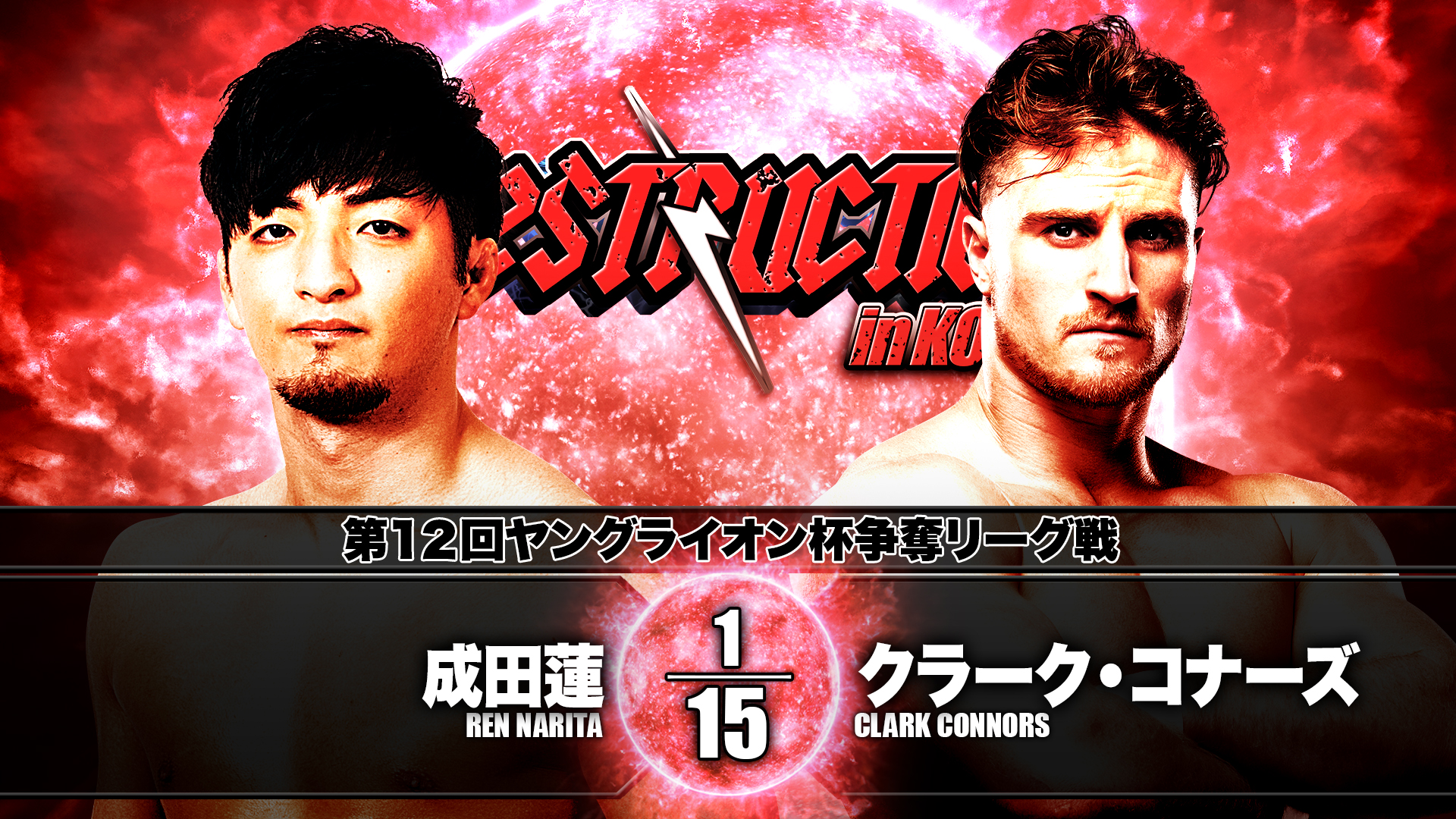 With Ren Narita’s pre-Kobe campaign wrapped up, he can look ahead to Kobe with pride in his 10 point record, and some confidence in himself. He’s the only Noge based Young Lion to beat three of the four non-Japanese Young Lion Cup entrants, having wins over Fredericks, Michael Richards and Alex Coughlin, and just needs one more victory over a Clark Connors who has experienced a late tournament slump to 3-3. A win would move him to 12 points, but that won’t be all for him to secure victory; he also needs for Umino and Fredericks to go for a draw, or for Fredericks to win that match. 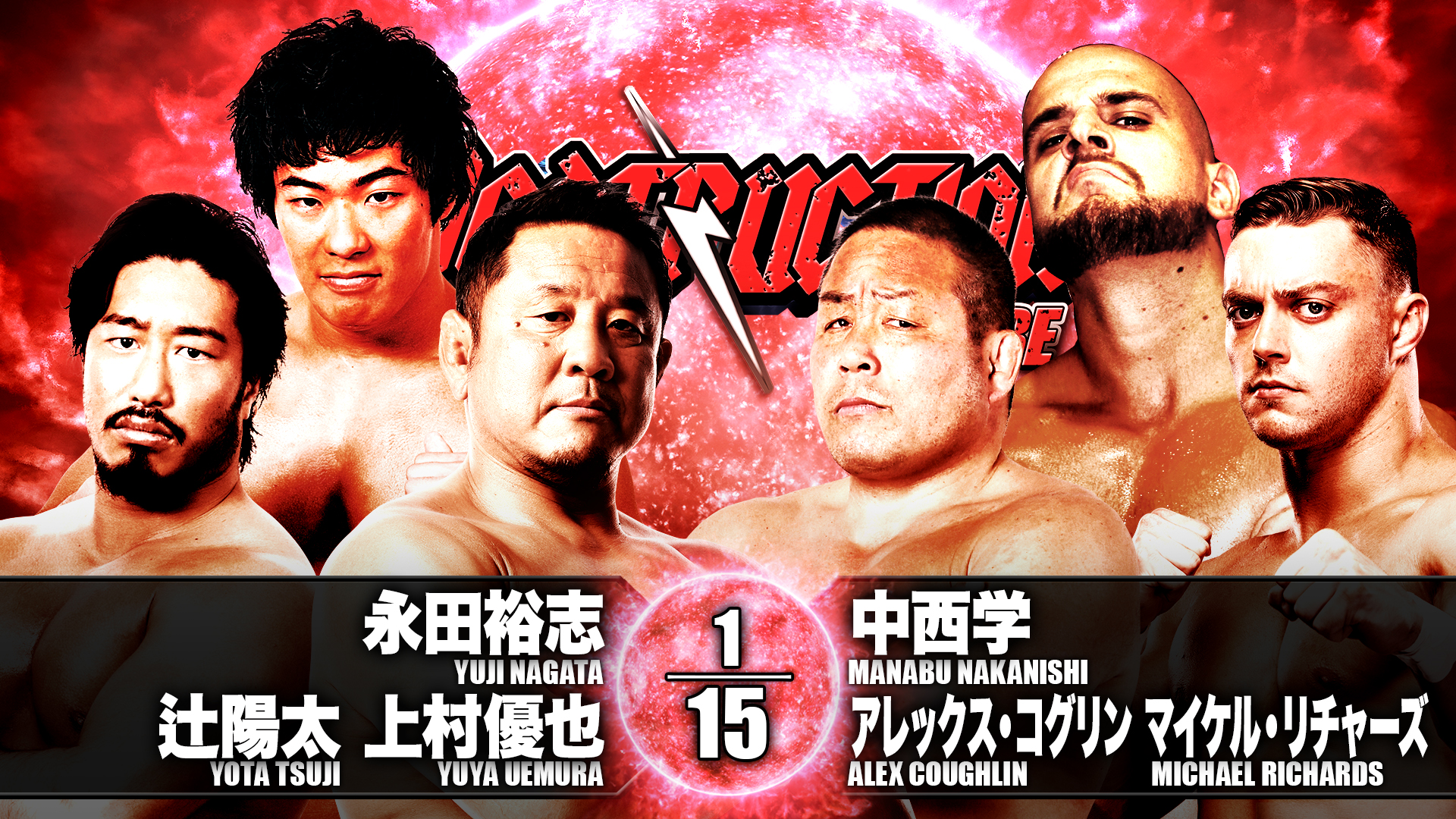 Starting off the night, Yuji Nagata and Manabu Nakanishi captain a Young Lion trio each once more. The Fale and La Dojos will clash with the Noge boys one last time on the Destruction tour, and, with the Young Lion Cup foremost in the minds of all involved, Nakanishi and Nagata will be reliving the deciding match of the 1995 tournament one more time!