At Destruction on September 22, fans in Kobe World Hall saw a terrifying scene. At the start of a six man tag team match, Minoru Suzuki attempted to remove Jyushin Thunder Liger’s mask. Liger would deliver a low blow to get the King off of his back, only to unmask himself and reveal his fiercest and most awesome form: Kishin Liger. 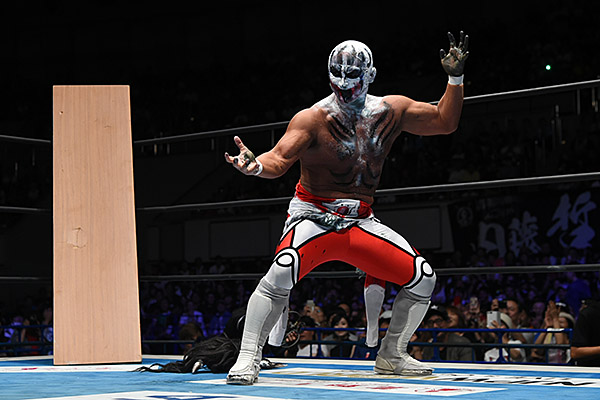 Suzuki had suggested for some time that this was something he wanted; in backstage comments, he had talked about finding the ‘soul’ of Liger that had laid dormant, or perhaps been extinguished altogether.  When Liger demanded a singles match against Suzuki in Beppu he backed off, not out of fear, but because ‘I don’t want you, I want the other one’.

It was only in Kobe that Suzuki understood what he had wrought. Kishin Liger flew into a violent frenzy, finding a spike that he almost buried into the King’s skull, a quick duck out of the way seeing the spike deeply embedded in a table instead. What was it really that Suzuki conjured in Jyushin Thunder Liger? The answer has ties deep in wrestling and cultural history.

The name Kishin carries with it connections to deities, but also personal transformation. Its kanji 鬼神 can be easily translated as ‘fierce god’, and can also be read as onigami (the god of the oni demons) or kijin. The word carries with it an idea of totality, a universal spirit of all creation both living and dead. It can also suggest the idea of extremely powerful latent ability, traits that Kishin Liger has clearly demonstrated. 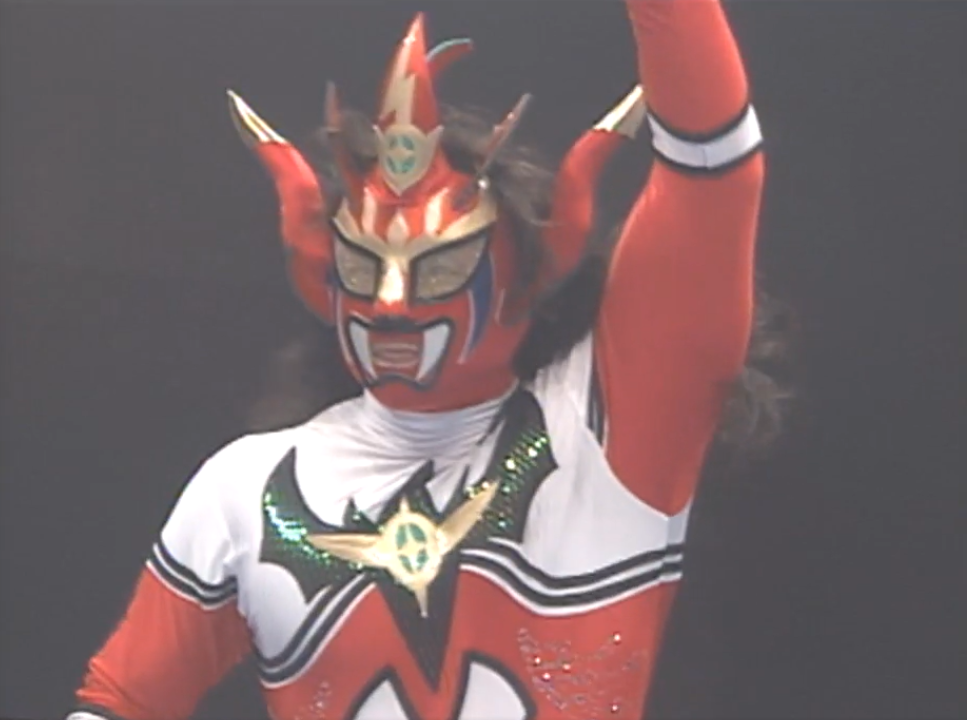 Yet Liger’s most fearsome form only makes an appearance but rarely. So rarely, in fact, that Destruction marked only the fourth sighting of Kishin Liger in all, and his first appearance in over seven years. Appropriately it was in the same place as the first appearance: Kobe World Hall, in 1996, when the Great Muta conjured up this awe inspiring, terrifying sight.

On October 20 1996, the city of Kobe was still recovering, barely a year after the Great Kobe Earthquake that had ravaged the city. In the middle of the Super Grade Tag League tour, Kobe World Hall saw NJPW action for the first time in over two years, and an event that saw major singles matches punctuating the tournament action. Young heavyweight contenders Michiyoshi Ohara and Manabu Nakanishi collided, Satoshi Kojima and Hiroyoshi Tenzan continued a rivalry waged since Kojima’s return from excursion in January that year, and Jyushin Thunder Liger took on the Great Muta. 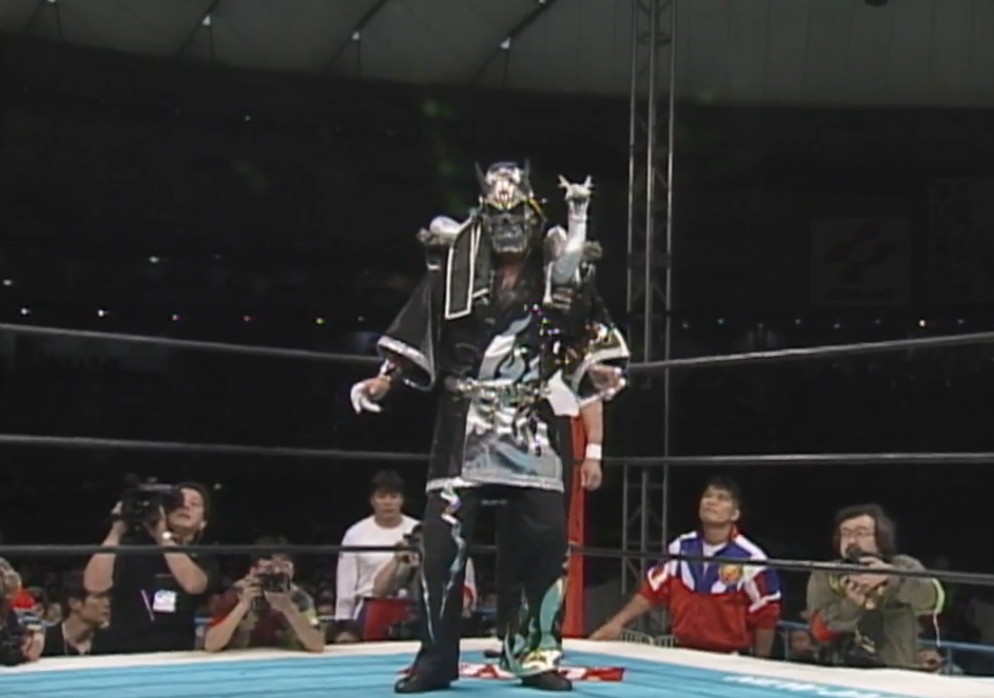 Now Liger had a chance against another former IWGP Heavyweight Champion, but the Great Muta was something different to any other competitor. Keiji Muto’s mysterious alter ego was wildly unpredictable, at one point viciously aggressive and at another hesitant to engage, as was the case at the start of his match with Liger. Then, suddenly after his masked opponent had much of the early control, Muta snapped. A piledriver onto a ringside table was followed by a brainbuster on the entrance ramp and a long run up to a lariat from the stage. The Great Muta was a wild violent force that Liger kept standing up to, but it was only when Muta tried to remove his mask that the superhuman Kishin appeared. 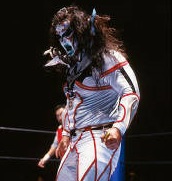 Where poisonous mist was usually Muta’s tactic in matches, here Kishin Liger delivered the toxic spew, before furious attacks out on the floor; including, in fact, with a metal spike. It was ultimately for naught, as Muta’s overwhelming red mist was followed by two moonsaults and defeat, but Kishin Liger had appeared as the incarnation of awesome power that lay beneath in the face of extreme adversity. Indeed, press would initially refer to this incarnation of Liger as Kyoshin (manic god) Liger, though after time and in light of the context, the strength conveyed in the name Kishin was deemed more appropriate.

It was, it seemed, a one time only appearance. A day later, Jyushin Thunder Liger was teaming with El Samurai, and the fierce god became dormant once more. It wasn’t for nearly a decade that Kishin would be seen again.

In July 2004 Liger shocked fans at a Osaka Pro Wrestling event when he aligned himself with Jado and Gedo to form the Control Terrorism Unit, or CTU. Liger would fully embrace a darker approach, along with an all black body suit, and antagonistic attitude in this period. It was a turbulent time in NJPW, and Liger was shifting along with it, but CTU still proved popular. Over its active period, the group would grow to include members like a young Hirooki Goto, Prince Devitt and Milano Collection AT, and celebrated its second anniversary on July 30 2006 by taking over Korakuen Hall.

The fourth match of the evening pitted Liger opposite Bad Boy Hido. In the mid 2000s, NJPW wrestlers would find themselves doing battle with independent competitors, and New Japan would often tie up with the since departed Apache Pro Wrestling promotion. It was at an Apache event that Jyushin Thunder Liger versus Hido ended in very short order, with Liger scoring an easy victory. Frustrated, an incensed Hido would brutally attack Liger after the match, including cutting chunks of Liger’s hair. 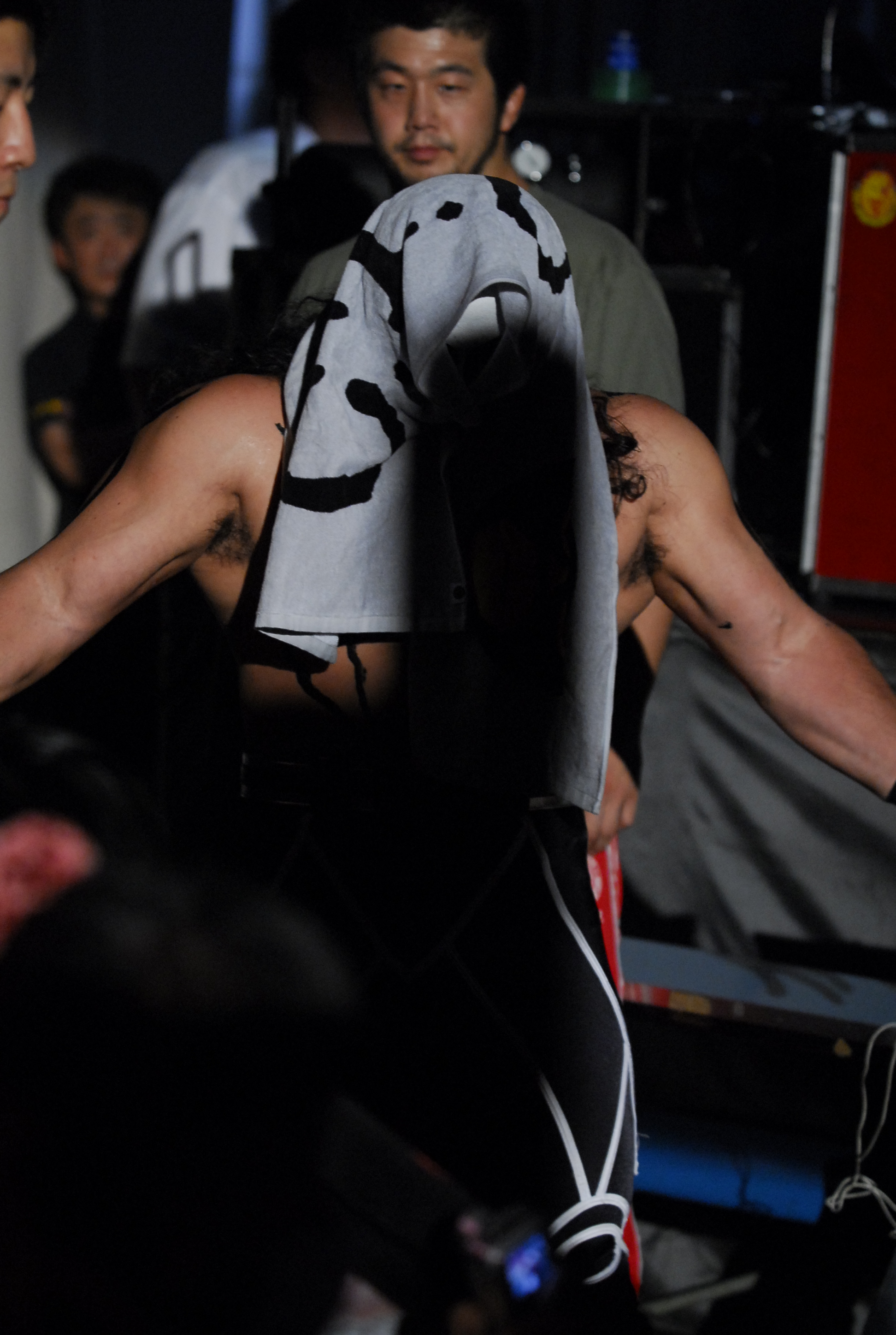 Liger responded by allowing a rematch with Hido in Korakuen, but that it would be against Kishin, not Jyushin Thunder, Liger. The only time that Kishin Liger’s appearance was announced ahead of time, fans were wild with speculation about how Kishin would manifest himself, ten years on from that fateful Kobe night.

On the night itself, Kishin would walk to the ring with his head covered in a towel rather than a mask, before revealing the face paint. Kishin and Hido would brawl over Korakuen Hall, Hido almost succeeding in giving Liger a shorter haircut again before a piledriver on the floor, and a brainbuster onto stacked chairs in the middle of the ring gave Kishin Liger a resounding victory. 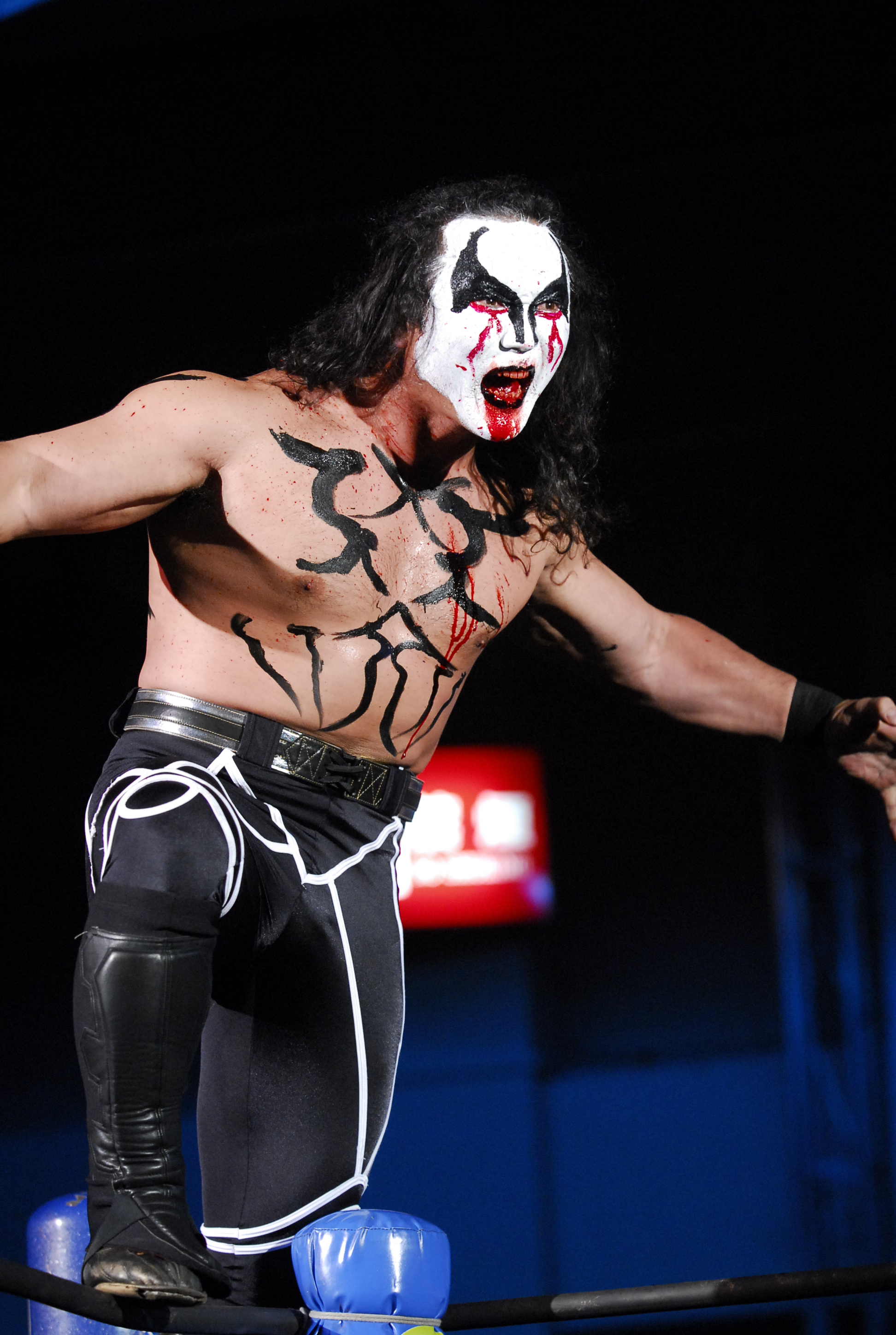 Hido vanquished, it seemed that Kishin was gone once more, fading again into memories and history books. CTU would disband; Liger, over two decades into his career would attain living legend status. Then, six years on, Suzuki-Gun appeared.

Cheap tactics and bad attitudes made TAKA Michinoku and Taichi who they were. Their common status as outsiders made Satoshi Kojima take the two under his wing in 2011, but their deplorable mindsets didn’t gel with Kojima’s sense of justice. Soon after, they would find a new leader in the evil Minoru Suzuki. Suzuki had his own history with Liger, but was more interested in the IWGP Heavyweight Championship at the time. Taichi and TAKA meanwhile made up the sleaziest and most effective of junior heavyweight tag teams.

Their disrespect for the fans, referees and rules and traditions of pro wrestling infuriated Liger, and his partner Tiger Mask. They would challenge for the IWGP Junior Heavyweight Tag Team Championships, but were constantly frustrated in matches leading up to their Dominion 2012 bout. Taichi in particular couldn’t resist poking the bear, tearing the decorative horns off Liger’s mask, and taunting the fans with them on several nights during the preceding tour. 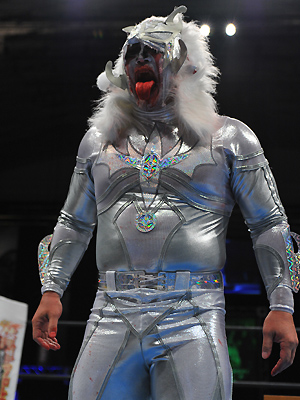 Then, on June 12, Kishin rose again. Taichi tore off Liger’s horns, and then taking a step too far, ripped at the mask itself, revealing Kishin beneath. Red mist would billow in Taichi’s face, before Taichi narrowly avoided a spike being driven through his head. Much as with Suzuki seven years later, the spike instead embedded itself into a table, and Liger decided to deliver a powerbomb through the wood as a violent plan B. Tiger Mask would then pin Michinoku, giving he and Kishin Liger’s final career IWGP championship. 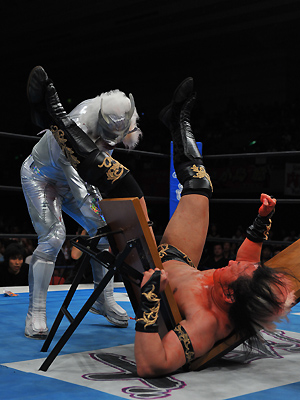 Tiger Mask seemed to restore some level of humanity to Kishin Liger by replacing his mask after the match; Liger would be angry backstage, but already Kishin’s spirit had apparently left us once more. This time, finally he was gone for good, many thought; after Liger announced his 2020 retirement earlier this spring, it seemed as if Kishin wouldn’t come back.

That is, until Suzuki wanted ‘the other one’. Minoru Suzuki and Jyushin Thunder Liger’s history goes back to November 30 2002, not in a New Japan ring, but in Pancrase. Pancrase was the pioneering mixed martial arts promotion founded by Suzuki and fellow NJPW Dojo alum Masakatsu Funaki in 1993,  and represented the completion of Suzuki’s transformation from professional wrestler to MMA fighter. After a career that saw him win two King of Pancrase titles, Suzuki decided to leave the MMA world in 2002, and would eventually return to pro wrestling in NJPW late the next year.

For his last fight, he wanted an opponent from NJPW, an opponent that was originally intended to be Kensuke Sasaki. When Sasaki couldn’t fight, Liger took the extremely short notice responsibility of representing NJPW and pro wrestling at large. It was, to the surprise of few, a whitewash of a fight, but Liger said afterward that he would be only too happy to fight Suzuki ‘in a couple of years, when I’m ready to’. 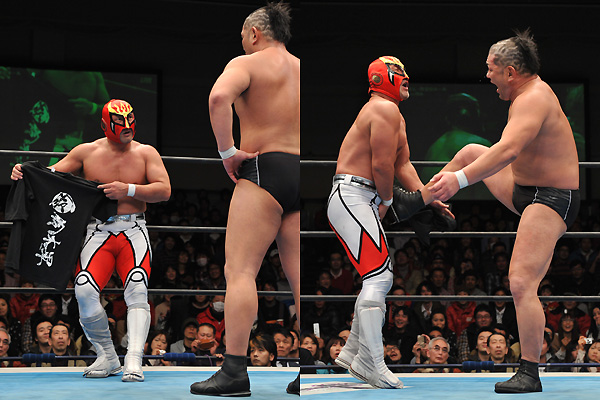 In fact, it would turn out to be over ten years until Suzuki and Liger met in a Korakuen ring on the road to 2013’s Wrestle Kingdom. After a competitive match that saw Suzuki kick out of a Liger vertical drop brainbuster before landing a Gotch Style Piledriver, Suzuki appeared to bury the hatchet with Liger by offering him a Suzuki-Gun T-shirt. Betrayal was quick and aggressive however. Post match, Liger would vow to once again take tag gold away from Suzuki’s allies Michinoku and Taichi, and added that ‘at some point soon, I’m coming for your head!’ 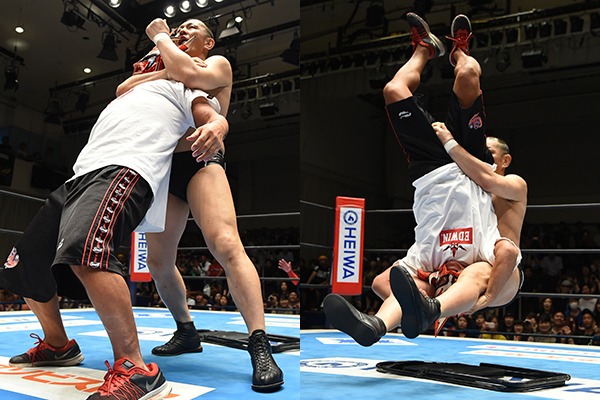 Then, nothing. Nothing until Liger’s 30 year celebrations this April. Suzuki would brutally attack Liger, asking whether the living legend ever really was going to come for revenge, or whether he was hoping to quietly retire with this chapter left open. From there, in September he assaulted Liger at ringside, piledriving him onto a chair in Korakuen, and taking his mask in Kagoshima. We saw what followed in Kobe, as Kishin Liger’s visage presented itself once more, and once more, a spike was in his hand with murderous intent. 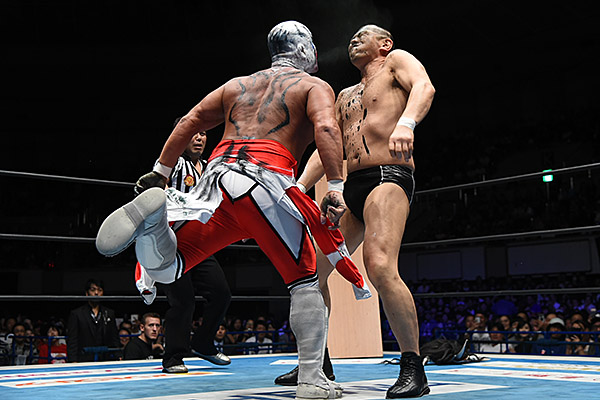 There’s an interesting symmetry to Liger’s relationship both to Suzuki and Kishin Liger. From Kishin’s first appearance in 1996 to his second, ten years went by. From the second to the third, a further six years. Suzuki and Liger first squared off in 2002 in Pancrase, and in December 2012 in NJPW. Then this dangerous rivalry was reignited in early 2019; ten years and six years. Kishin Liger first appeared while Jyushin Thunder Liger was at his peak, but also when he was facing peak adversity, when he was fighting for the honour of his division against an intimidating heavyweight foe. In 2019 Kishin returned with Liger again fighting for honour, of New Japan integrity in the face of Minoru Suzuki’s bullying and disregard for rules and respect. On October 14, Jyushin Thunder Liger faces Minoru Suzuki one on one in Ryogoku Sumo Hall. The question is whether Kishin is with Liger in spirit only, or whether he will manifest himself physically for the last time. 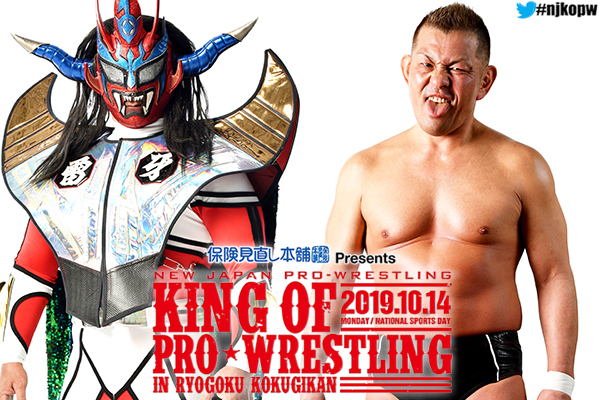