On November 15, a special memorial card will be held to remember the Destroyer Dick Beyer, a legendary figure in global professional wrestling and Japanese pop culture, who passed away in March at the age of 88.

Freshly announced for the card is a six man tag team match that sees Jun Akiyama of AJPW team with freelancer Shiro Koshinaka and Dradition’s Tatsumi Fujinami against Hiro Saito, Satoshi Kojima and Hiroyoshi Tenzan. Tenzan, Kojima and Saito have a history together that goes back to the days of nWo Japan and Team 2000, and now these three reunite opposite All Japan legend Jun Akiyama, former IWGP Junior Heavyweight Champion Shiro Koshinaka and Tatsumi Fujinami. On January 4, Fujinami will join Liger for the first of his retirement matches, and this is a chance for the original Dragon to get a momentum building win. 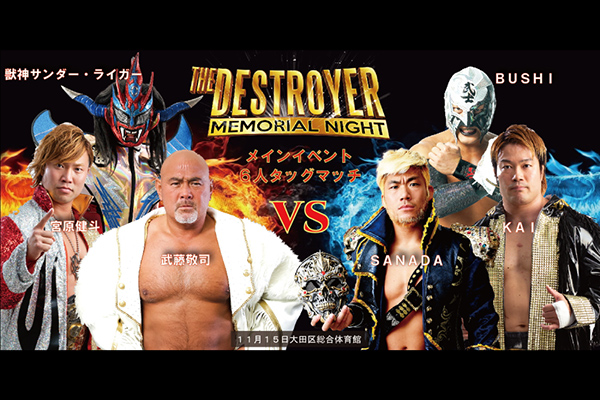 The top match of the night will see Jyushin Thunder Liger in an impressive trio with WRESTLE-1’s Keiji Muto and Kento Miyahara of All Japan Pro Wrestling. Speaking of AJPW, their opponents are three men who got their first breaks in the promotion; Los Ingobernables De Japon’s BUSHI and SANADA and freelancer KAI.

Keeping an AJPW theme are two more All Japan alums now part of Suzuki Gun: Taichi and Yoshinobu Kanemaru. They’ll face All Japan’s promising sibling tag team of Yuma and Atsuki Aoyagi. Taichi has a history with Yuma Aoyagi; the Holy Emperor was vicious in his assault on Yuma during their first round Super J-Cup 2016 meeting, and since then, they’ve been opposite one another at the AJPW 45th anniversary event in Ryogoku in 2017, and the Giant Baba Memorial card in February.