First of a planned three night retirement made official in Tokyo.

On Tuesday October 15, from TV Asahi’s headquarters in Roppongi, Tokyo, a press conference saw two matches made for night one, January 4 of Wrestle Kingdom 14. One was the main event of Kota Ibushi and Kazuchika Okada for the IWGP Heavyweight Championship, and the second was the first Jyushin Thunder Liger retirement match.

Liger’s retirement will be celebrated over three days from January 4-6. January 4 and 5 will see the last two matches of his career, with January 6 at New Year Dash!! seeing his retirement ceremony.

The first retirement match will be a star studded eight-man tag team match. Jyushin Thunder Liger, Tatsumi Fujinami, Great Sasuke and Tiger Mask, accompanied by El Samurai will face Ryusuke Taguchi, Shinjiro Otani, Tatsuhito Takaiwa and Naoki Sano, accompanied by Kuniaki Kobayashi. Sano wrestles in other promotions as Takuma Sano, but for this match will be billed as Naoki as a call back to his days battling Liger in NJPW. Norio Honaga will be the special guest referee for the match. 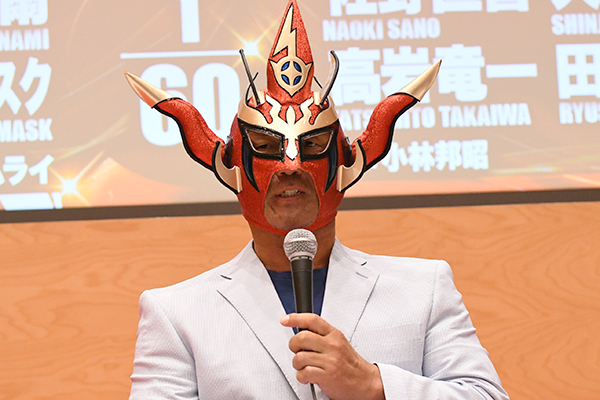 Hello everyone! thank you for coming. You can ask me anything!

— The schedule for your retirement has just been announced. First of all, your thoughts on this match on January 4?

Liger: Well, I don’t want to end my career on a sad note. I want it to be a happy occasion and have it be a show. Tatsumi Fujinami is the reason I became a pro wrestler, and having fought each other and with each other so many times, adding Sasuke in there makes for something new as a tag team. On the other side, with guys like Otani and Takaiwa, I think we can tear into each other and it’ll be a lot of fun. To be honest, I don’t have many feelings about all this yet, but I think whatever happens, the retirement ceremony will be more quiet, so I want to have retirement matches that have everyone on their feet cheering.

At this point Tatsumi Fujinami entered to join the press conference. 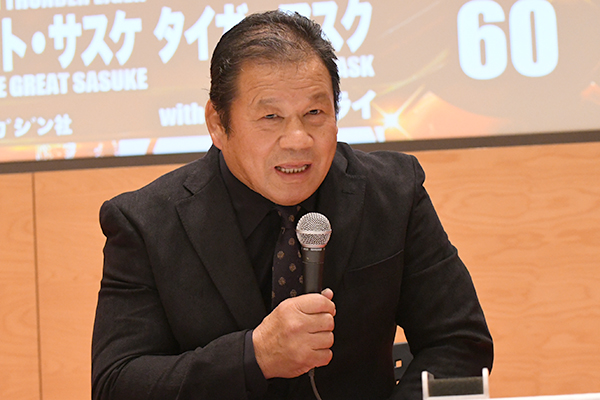 First of all I want to congratulate Liger on his retirement. I also want to express my gratitude to him for giving me this chance to be in the ring with him on January 4. After having spent so many years here in NJPW, for the company to look at me so warmly and with such broad minds and hearts to give me the chance to wrestle on January 4 in the Tokyo Dome is something I’m supremely grateful for.

I’m feeling an excitement and nervousness that I haven’t felt for a long time. Though I was used to all of this at one time, to be here after over ten years, and especially to be tagging with Liger, I want to work to be in the best condition I can possibly be in so as not to hinder the team.

–Liger, we just welcomed one of your partners here.

Liger: It’s awesome, right? It’s so kind of you to be here, thank you. When I was in elementary school, I saw a magazine with your picture on the front, having come back to Japan with the championship. The picture of you with the belt over the shoulder I just thought was so cool. From there I fell in love with wrestling, had a Dragon Rocket poster and another with you doing a bridging double arm suplex on my wall… That was the birth of Kid Y who wanted to be a pro wrestler. It’s no exaggeration to say that it’s because of Tatsumi Fujinami that I’m here today. I’m so happy for this to happen.

–Your thoughts on your other partners?

Liger: Sasuke’s kind of in another world lately, so there’s a little awkwardness there, but he is absolutely capable  . I trust him, there’s no problem there. tiger Mask I’ve teamed with a lot, so no issues in that regard. At the end of the day, though, Fujinami is the captain of this team. He’s at the helm of this ship, and I’m confident he’ll carry us on his back, no, his shoulders to victory! 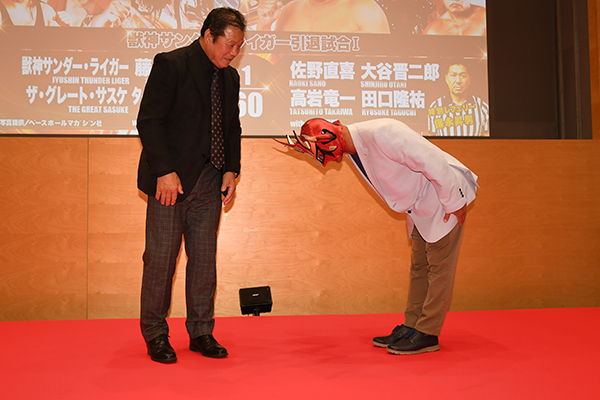 –El Samurai will be in your corner for the match.

Liger: I kept on telling him that he should wrestle, but for whatever reason he refused. He was my partner for such a long time though it really wouldn’t be the same if he wasn’t involved, so when it came to the question of having seconds or not with us, I asked him to be mine and he finally caved in and accepted. So to be teaming with the guy who got me into wrestling, old partners, new partners, people I’ve fought against and with, I’m really really happy.

–your thoughts on your opponents?

Liger: I know Taguchi from the number of times we’ve tagged together. Otani and Takaiwa I had a match with reently in ZERO-1, so I know how good they are, how they still have that will to win. So I think we’ll be bringing the same fire to them, the same violence.

Sano, for a long time, they were calling him the second generation Tatsumi Fujinami. There was a lot of talk that he could be the only successor to Fujinami, so there was a lot of hope pinned on him. So then I came in, he was just slightly my senior, but we both had that feeling of not wanting to lose out to the other, whether I was masked or not. That’s the feeling we’ll bring into this match, and it’ll definitely be hard fought, rough and ready.

–In your opponents’ corner is Kuniaki Kobayashi.

Liger: He was my debut opponent, and I think there’ll defintiely be an air of pressure about this match with him in that corner. Just because it’s my retirement, he isn’t going to be bringing any flowers.

Liger: I met Honaga recently at Pro Wrestling Masters. Way back when, before the mask, he returned from mexico on excursion right back into the Dojo and we were right with each other ever since. We just talked and talked like we hadn’t missed a day. I’m so thankful he’s the referee. 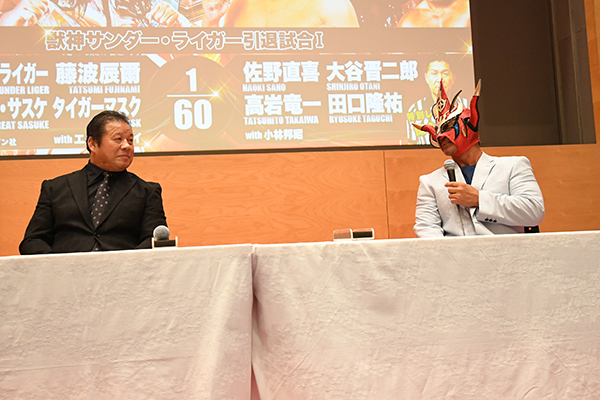 –Fujinami, you’re the oldest participant in the match. Is that challenging?

Fujinami: Absolutely! Because I’m with all these guys, it’s on me to be able to come to their level. I have to give it my all to make sure I’m in the best possible condition.

Liger: No, no! You see it at Pro Wrestling masters events, and I’m not just saying this, he’s in the best shape out of anybody. Seriously, it’s us who can’t lose out to our senpai. We haven’t actually tagged much together before, have we? It’s so exciting.

— Do you have anybody in mind to wrestle before January 5?

–Even from other companies?

Liger: Sure. This old hound can still fight.

–To Fujinami, this wuill be the first time since 2006 that you’ll wrestle in the Tokyo Dome. Your thoughts on this stage?

Fujinami: I said it at the outset and don’t want to repeat myself, but I’ve nothing but gratitude to NJPW and to Liger to be able to be on this stage, and to team with him.

–Is there anybody you want to face on January 5?

Liger: No, not in particular. If there’s anyone that wants to step up and say ‘I’ll wrestle you’, it’ll be my pleasure.

–So nobody in particular?

Liger: There’s nobody that I really want to say ‘yeah, him’ about. I’m happy with anyone. But I don’t want it to be a sad occasion. I want to have a match where I can go it and have it be befitting of Jyushin Thunder Liger. 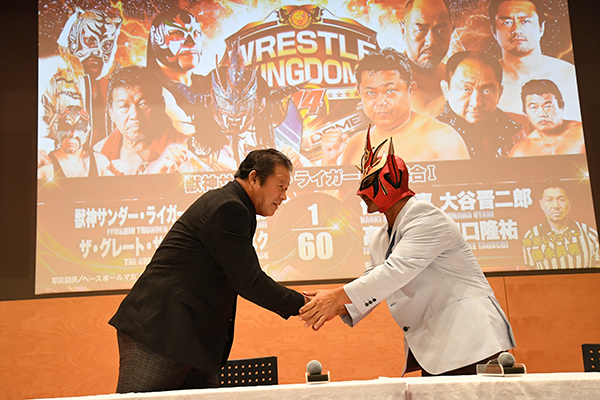 –Do you have similar thoughts when it comes to your retirement ceremony on January 6?

Liger: Right. When you look at the number of matches on January 4 and 5, and the atmosphere around it, I really did think I didn’t need a ceremony, that just matches would be fine. Everyone does the ten bell salute thing, and I thought maybe it would be interesting for someone not to, you know? But the company said that in order to draw a distinction, they’d take the time for a ceremony on the sixth, and for them to make that time for me is something I’m very grateful for and honestly, humbly accept.

–Fujinami, what are your thoughts on Liger’s retirement?

Fujinami: Well, he can definitely go harder than me, still. But it’s his feelings and decision. It’s the same with Riki Choshu, who retired earlier this year, there’s some sadness to it, but the important thing is that we tear it up as wrestlers. The others in this match probably feel the same way, that we want to give him the very best sendoff possible.

–It’s been seven months since you announced your retirement. What has it come to mean to you?

–What are your emotions heading into the retirement? Any sadness, or happiness?

Liger: I’m in two minds. One feeling I have is to not dwell on any of the sadder thoughts. In wrestling to a greater or lesser extent, you’re dealing damage and pain in order to beat somebody else. You do your stuff, and you get beaten up too. There’s pain, there’s injuries, and lives are put on the line. You’d think in a way to be away from that is a good thing and a sense of relief. But there’s a nervous energy and electricity to it all that I don’t feel in any of my private life, and that not being there is a little sad. Not to be on the bus going around the country and having fun, that going away is a little sad. But there’s still time to do that stuff. The last seven months has gone by in a flash, so to be honest, I haven’t had the time to feel sentimental about any of it. The other thing is, how will it all feel after it’s all done, after the 6th? That’s a little exciting if anything.

–Any special costume plans for the last appearances?

Liger: No, not at all. It’ll be the same Liger you’re used to. Same for the retirement ceremony as well. The same Liger should suffice, shouldn’t it? 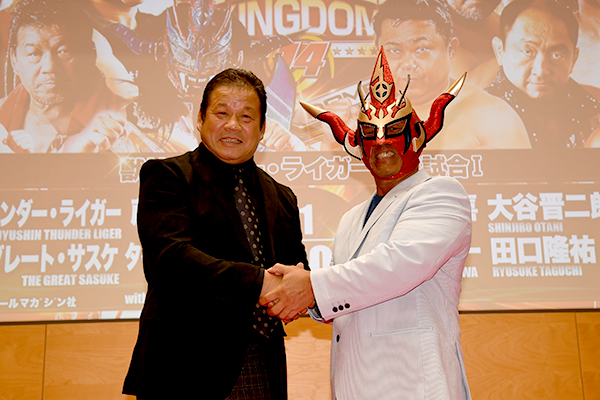