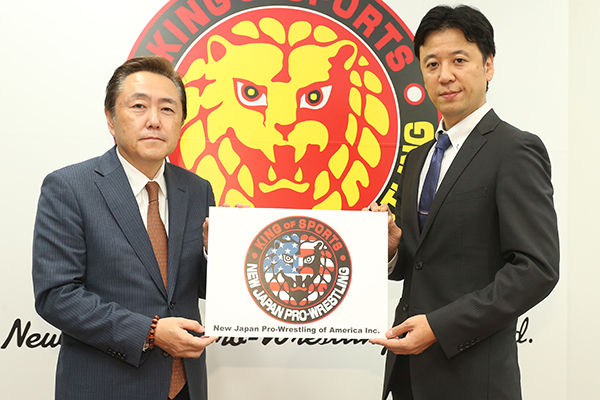 Watch all the action of NJPW around the world on NJPW World!

At a press conference delivered to assembled media on October 21, New japan Pro-Wrestling formally announced the establishment of a US based subsidiary. Named New Japan Pro-Wrestling of America, the company will be based in California and begin operations in November. 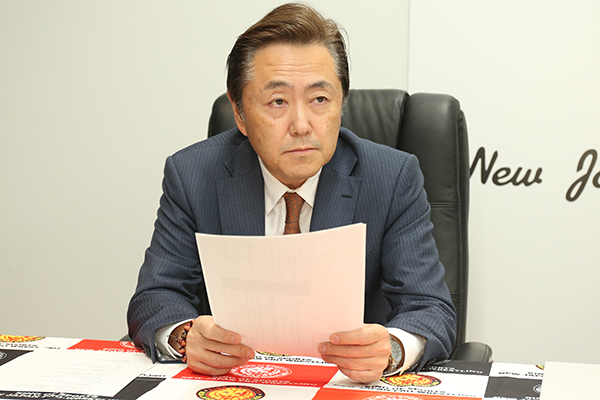 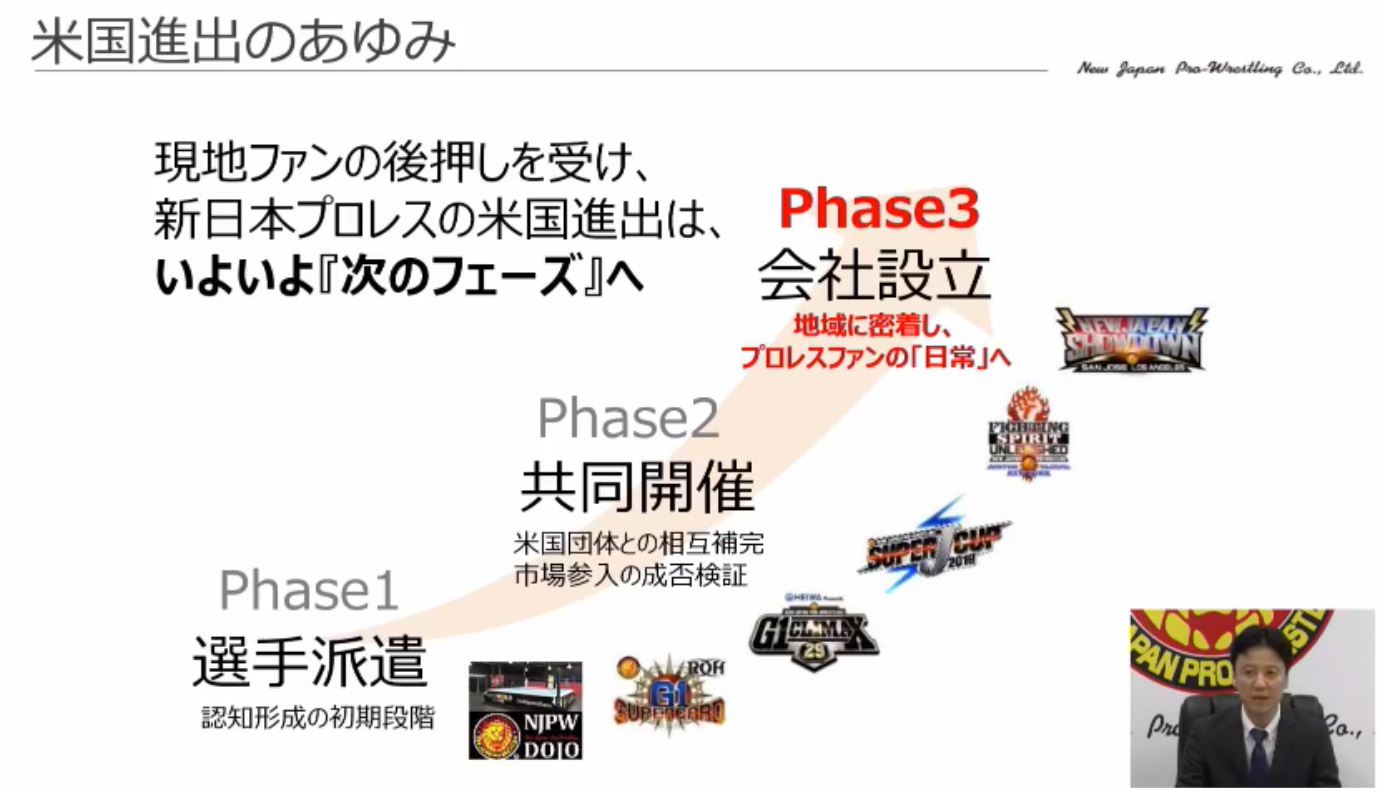 CEO Ohbari gave a presentation detailing the structure of NJPW of America, and the decision making behind its establishment. The creation of the subsidiary, Ohbari explained, is the third phase of NJPW’s expansion into the US and other international markets.

Phase one: discovering new wrestlers in markets outside Japan and developing talent through the LA Dojo.

Phase two: run events in the US, including at Madison Square Garden and Dallas this year, both independently, and with the assistance of other promotions.

Phase three: establish a company within the US, and be ingrained in the everyday fabric when it comes to fans’ wrestling consciousness. 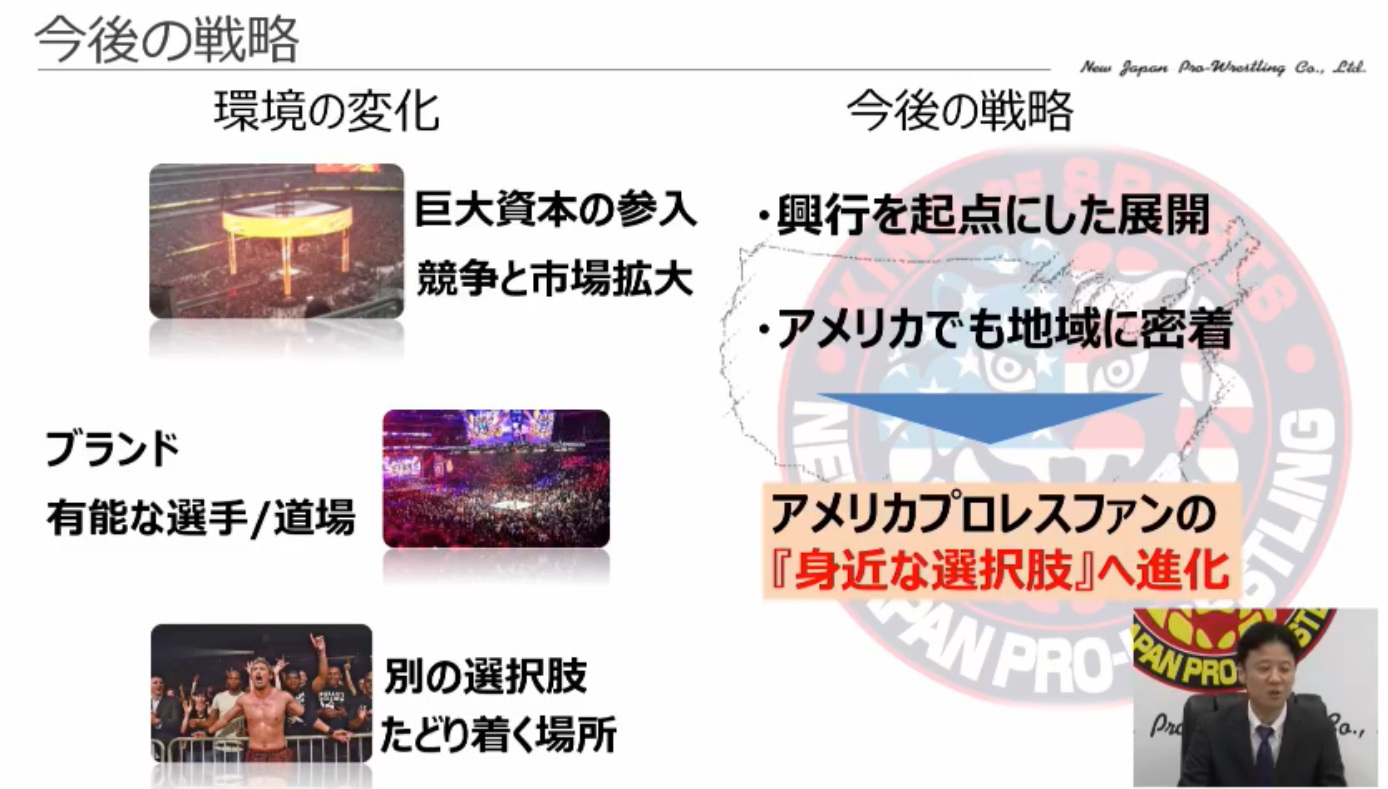 Ohbari went on to explain what had to come next as NJPW of America moves forward. Growing a footprint and increased consciousness in America will become a key factor, especially as competing cash rich promotions are being established. Ohbari explained that fans of NJPW are strongly invested in the concepts of Strong Style and the high level of wrestling that New Japan provides and is farmed by Dojos in Noge and LA. The majority of fans surveyed during the recent Dallas event stated that they watched other wrestling besides NJPW, and that they still expressed a preference to the different style and approach that New Japan presents.

To those ends, NJPW of America will be putting live events at the core of its business within the US. Just like fans in Japan currently, the goal will be for American fans to experience NJPW up close and in person on a regular basis. This will all happen under the name and branding of New Japan Pro-Wrestling, maintaining the brand that fans know and love as-is. 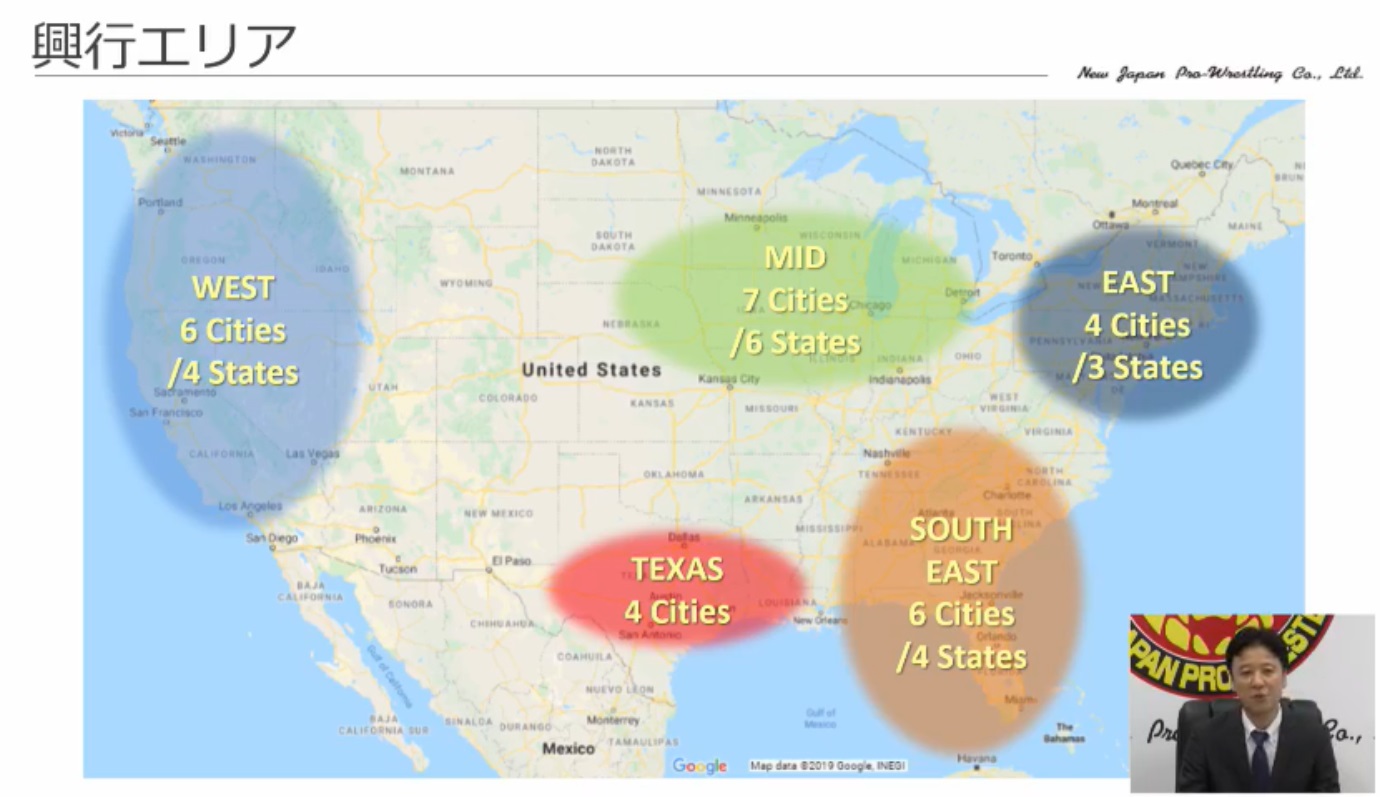 The touring structure for NJPW of America will see events being run in five key areas:

With this in mind, the plan will be for the majority of the US fanbase- some 70% according to market research- to be able to attend an NJPW event and see New Japan action near to them. 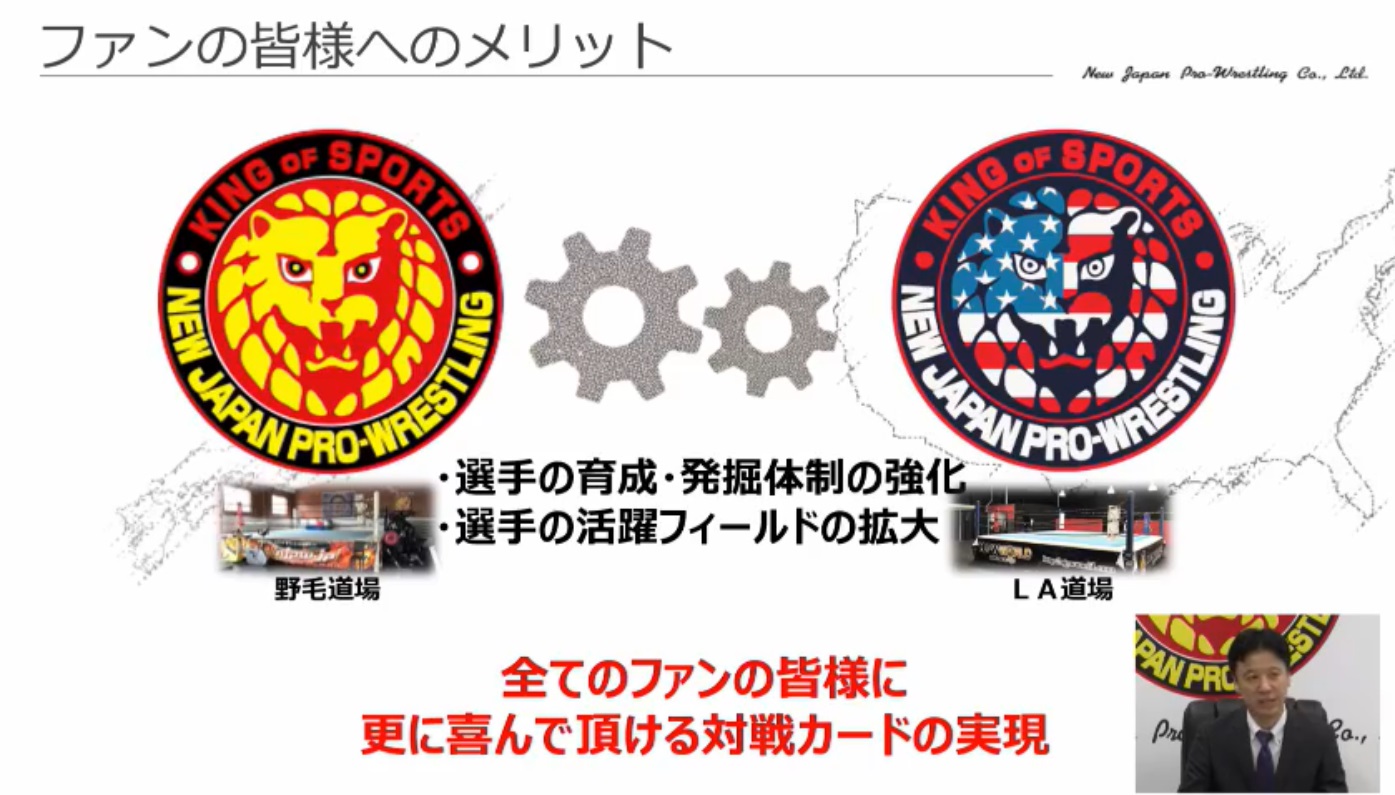 Ohbari went onto explain the benefits that fans both in Japan and America can expect to experience from the establishment of NJPW of America. The Japanese fans will not be abandoned, but rather the expansion will see benefits on both sides of the Pacific.

While the LA Dojo has existed solely as a Dojo up to now, it will now see a full office environment that is designed to support business in the States, as well as to support talent. Perhaps wrestlers who have what it takes and have a passion for NJPW, but for whatever reason are unable to perform in Japan, will be able to represent NJPW in America. At the same time, tryouts and camps will ensure new talent is discovered, developed and trained to the point where they can perform in both America and Japan. This will lead to a deeper roster of talent and better matches and events going forward. 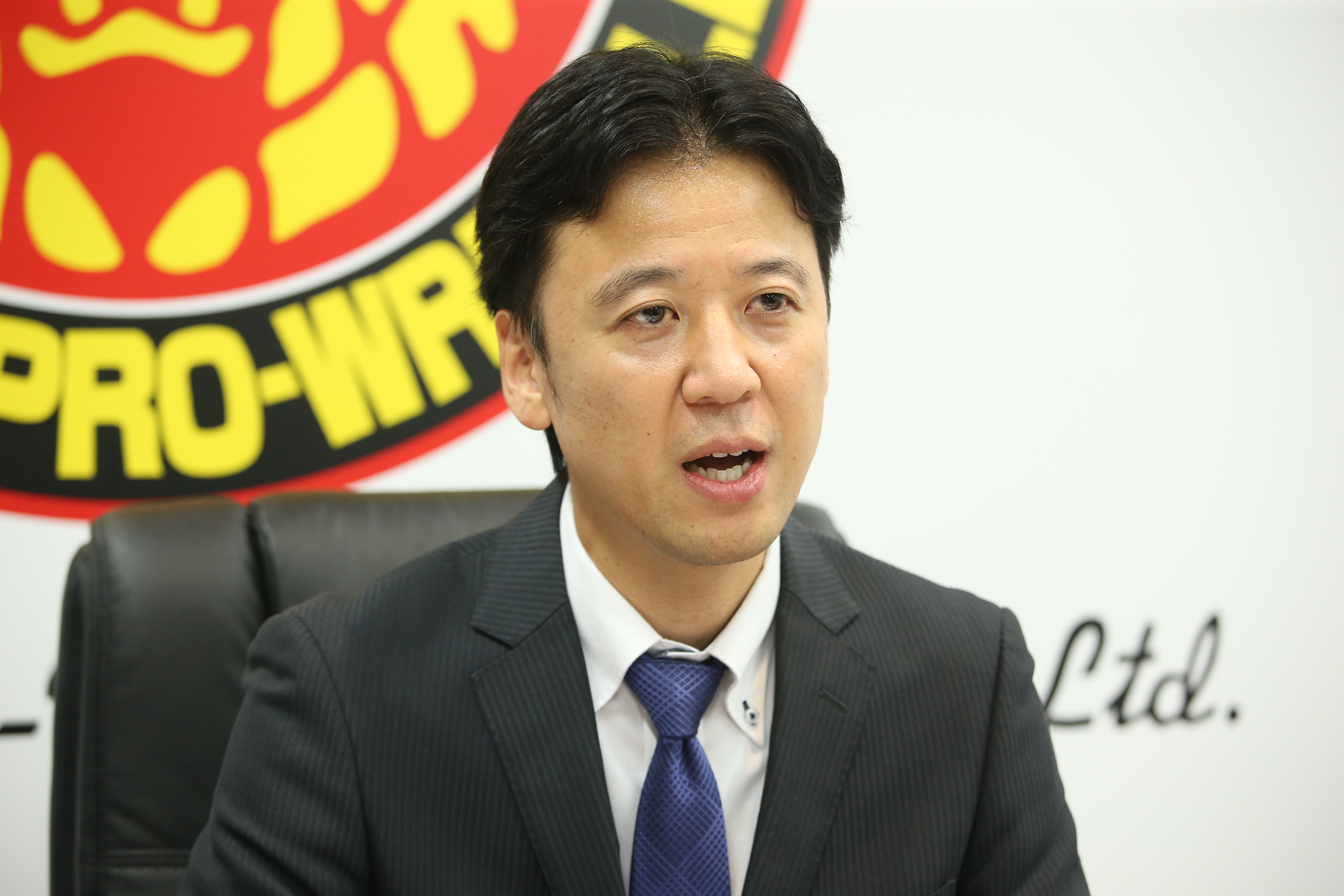 The press were then invited to ask questions on the day’s announcements:

–As NJPW runs more events in America, what are the differences between the two markets?

Ohbari: I’ve been involved with and working in the market for over a year now, and in my experiences, what you see in America is more of a range. There’s a bigger range of ages, from kids to the elderly, and part of that comes from it being so pervasive on television I think, that the whole family ends up watching. Audiences also skew more male; in Japan, our male female balance at events is 60:40, while in America it’s more 80:20.

That said, you do have that diverse age range, and also diverse tastes, I feel, to where American fans enjoy a mix of several different styles of wrestling. Also because there are a lot of young fans, they often view content digitally rather than through TV, and that’s something we hope to take advantage of.

–Will there be plans for longer tours in the US, of the order of the three to four week Power Struggle tour that crosses the whole country, as distinct from the condensed Super J-Cup and Fighting Spirit Unleashed weekends?

Ohbari: You saw the map as part of the presentation earlier, and I think we’ll be keeping to tours taking place in those areas and not outside. It isn’t practical to be jumping between the east and west coast, but you’ll have the west coast tour, and then the Texas tour later, then the central tour and so on. That’s the plan.

–Will tours in the US run concurrently with Japanese tours, or could it be that American and Japanese tours run at the same time?

Ohbari: The main idea will be that US events will take place while the Japanese schedule is between tours. If there is high demand from fans, simultaneous tours may become a possibility.

–What are your plans in terms of scale of events?

Ohbari: We’re currently running and looking at venues in the 2000 seat range, that may be lower depending on circumstances. We are a live event company, and the first priority of a live event company is to run in more venues. Once people are in those venues, then we can fire them up and have them ready to spread the word to larger and larger audiences. First though, it’s about growing the number rather than the size of venues. The long term plan will absolutely be to run big venues on a regular basis.

–Do you have plans for a certain number of events per year in the US?

Ohbari: This is something that I’m discussing with Chairman Sugabayashi, but with 12-13 events run in the calendar year 2019, I think that we could be in the region of double that next year.

–Will events be primarily broadcast on NJPW World? Also will there be dark match only Dojo events?

Ohbari: As much as is humanly possible, we plan for events to be live on NJPW World. Where we can’t arrange for live broadcast, they will be on demand. As far as Dojo events are concerned, that isn’t decided at all, but we have a large space in the LA Dojo and it may be a possibility in future.

–Will the increase in American events necessitate a reduction in the number of Japanese events?

Ohbari: There are no plans to reduce the number of Japanese events.

–So there will be more total events on the calendar?

–Can you give any details with regards to television rights?

Ohbari: Up to now we have been working very well with our partners at AXS TV, and plan to continue doing so. As events increase in number in the US, we would like to be able to make more opportunities for fans to watch those events live and in real time on TV, and those are opportunities we’re excited to discuss with TV partners going forward.