With the Super Junior Tag League at its midway point, it’s time to check in with El Desperado and Yoshinobu Kanemaru for their thoughts on the back end of their campaign!

Last time, harsh words were spoken about some of the top teams in NJPW. What are their thoughts on the remaining teams?

Watch all the action of the Road to Power Struggle live and on demand with NJPW World!

One thing I want to say to Volador: ‘you’re one in a million, in the lucha world’ 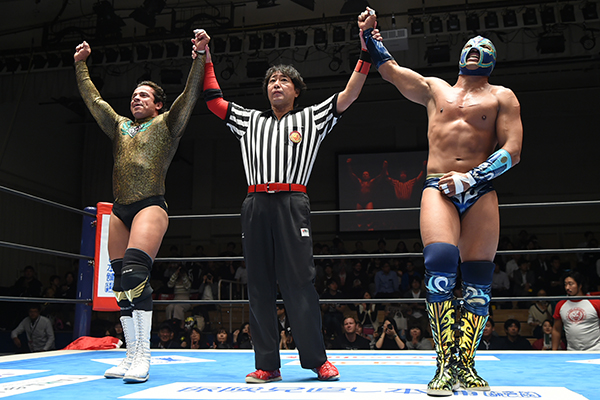 –Let’s continue our look at the Super Junior Tag League field. On October 26, you face Volador Junior and Titan.

Kanemaru (YK): Luchadors? Over to you, Despe.

–I think you had the exact same thing to say about Volador Junior and Soberano Junior last year!

YK: Well, I don’t know anything about Mexicans.

Desperado (ED): Nah, ‘Nobu can handle anybody. He just doesn’t like lucha.

YK: I won’t deny that. Well, you can be point man on this. I’ll just… be there when you need me.

–Desperado, you actually hold Volador Junior in high regard.

ED: When I think of his matches, I think they represent exactly what a CMLL match is. I think in many ways, he is CMLL. In a lucha environment, he’s king, but on the other hand, when you take him out of that rhythm and pace, then he struggles. One thing I want to say to him is ‘you’re one in a million… in the lucha world.’

ED: It’s a big world out there in wrestling. They’re coming into our back garden, and into me and ‘Nobu’s specialty. He can’t do what he wants and fly all over the place with us. I don’t want to lose to (Volador) anywhere, but especially not in this ring. I’m not about being sentimental; this match is just one more on our road to the top. 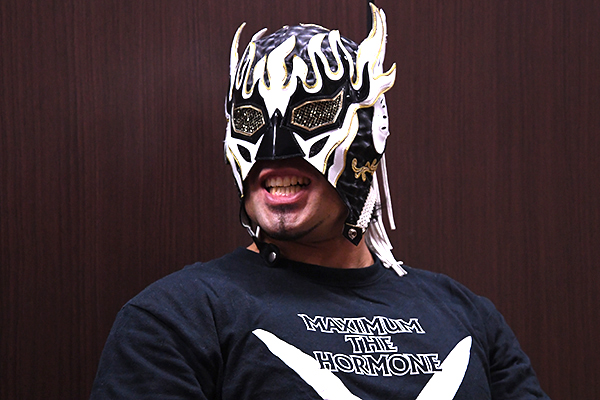 –What about Volador’s partner, Titan?

ED: He has skills, for sure. I remember, maybe it was in a magazine or something, I remember seeing him in Best of the Super Juniors (in 2013) hitting an Astro Scissors on the apron to Hiromu Takahashi while he was still a Young Lion.

–An Astro Scissors is a head scissor variant where you catch an opponent’s head between your knees and flip forward. It’s an incredibly difficult thing to pull off, and he did it on the apron?

ED: Yeah. So he has that mix of being very skilled and wrong in the head at the same time.

YK: Yeah, no thanks. You never know what those lucha guys are gonna do.

–By the way, Kanemaru, you lost to Titan during Best of the Super Juniors, right?

ED: It was pretty recent!

YK: Well that’s it, it couldn’t have left much of a mark on me! I’ll make sure they remember when we beat them.

TJP? Japan isn’t America. I’ll make sure he doesn’t get the wrong idea. 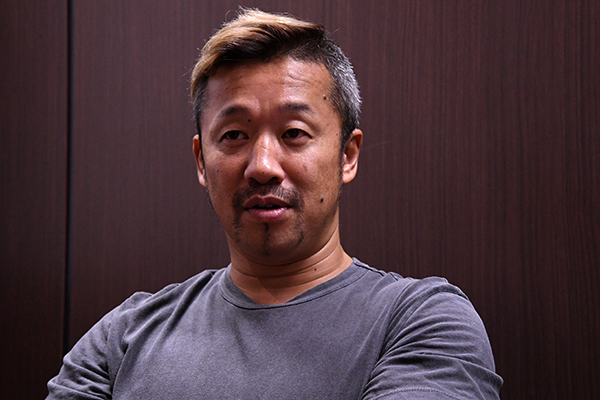 –On October 27 in Korakuen, you face TJP and Clark Connors.

ED: What the hell is a Clark Connors?

YK: He’s the short kid from the LA Dojo, right?

–He’s been called the ‘Captain’ of the LA Dojo. He was very effective during the Young Lion Cup.

YK: It’s TJP I don’t know about. What do those letters stand for, anyway?

ED: Ahh, I think I saw him do something in a Best of the Super Juniors (2011). He went for a tijeras on Taichi, overegged it and went flying (laughs).

YK: Hahaha! So he didn’t amount to much?

ED: Well, I think he went on to work for some big company in America.

–He won WWE’s Cruiserweight Classic in 2016, a tournament that Kota Ibushi and Zack Sabre Junior were also part of. He was part of the equivalent of their junior heavyweight division until recently. 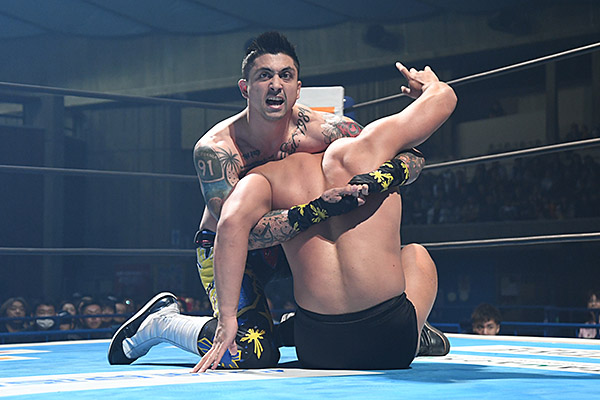 –In fact, TJP trained in the original LA Dojo in the early 2000s, and was part of the 2004 Young Lion Cup. So his team with Connors is an LA Dojo ‘Senpai/kohai combo’…

ED: Hmmm. You’d better say that a lot, right? Hammer it home to people. Otherwise they’re just a vanilla tag team. But TJP, he has a unique way of putting people in holds. He could be a surprise in this one.

YK: Yeah, I don’t know about these guys either. I’ll leave it to Despe.

ED: Again? This is where we call DOUKI in!

Uemura is the most Young Lion of the Young Lions, don’t you think? 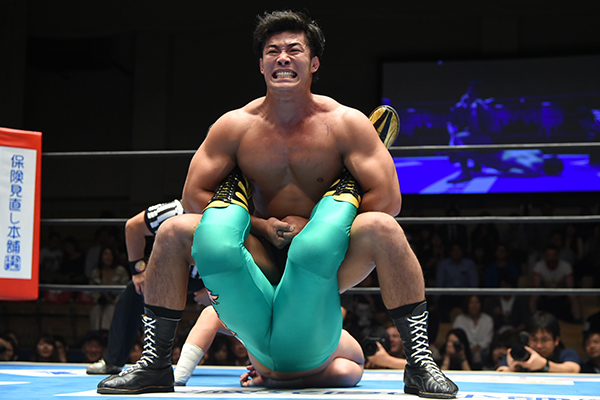 –On October 28 in Korakuen Hall, Yuya Uemura and Tiger Mask.

ED: Cut off Uemura, make sure Tiger Mask doesn’t get in the ring. Next.

–That’s all you have for those two?

YK: You don’t want to talk about Tiger Mask? As much as I’d like to say some of this depends on Uemura, fact is, whether that kid lives or dies is entirely on Tiger Mask. Mind you, Tiger Mask isn’t exactly new on the scene. He’s a known quantity.

–So you might be testing Tiger Mask’s strength in this match.

YK: I don’t think we’ve ever been on the receiving end of Tiger Mask’s strength. Right?

–He’s quite salty in the ring. Do you have any thoughts on Uemura at all? This tournament is quite the trial by fire for him.

ED: Well, I haven’t been watching him while I’ve been off, but when you’re starting out like him, a lot can change in just a few months. I don’t know how far he’ll go from here.

YK:  Match wise, he’s the most Young Lion of all the Young Lions, don’t you think?

–I’m a little surprised you seem so on top of what a Young Lion is doing.

ED: I’d much rather see two Young Lions wrestle than two guys who have no real reason to fight one another. There’s more emotion with them. A tournament like this is a real opportunity to get experience.

YK: He can’t just be happy to be there. He has to learn the difference between singles and tag wrestling, think for himself. End of the day though, whether he lives or dies is on Tiger, heheh.

I don’t think wrestling is about doing flippy moves to show off. 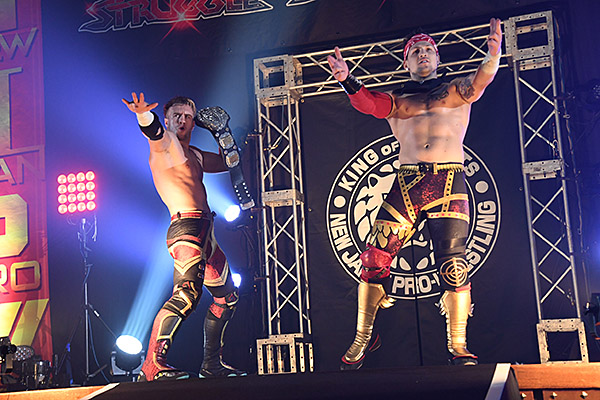 –Finally, on November 1, you face the Birds of Prey.

YK: For two flippy-do guys, those two function pretty well as a team.

–We’re seeing your philosophy toward pro wrestling here. It should be mentioned, last year’s Super Junior Tag League was where Eagles debuted, as part of BULLET CLUB with Taiji Ishimori.

ED: He’s able to do more with Ospreay, I think. Ever since he came in I thought, little cute guy like that, as a heel, nobody gave him any thought at all.

YK: His partner was no good for him before y’know? Whoever that guy was.

–Kanemaru and Ishimori are natural rivals.

YK: Either way, they’re not a team that can bother us.

–You’ve been tagging for about three years now. Do you feel you’ve always been solid as a team?

ED: Hm, I dunno… I’m not sure when it was, but not too long after we started teaming, I started listening to what ‘Nobu had to say. Don’t you think?

ED: I’m a simple guy. I want what I want. If ‘Nobu has something that I don’t, then it puts me at a disadvantage. So it pays for me to listen to him.

YK: Simply put, what we get that other teams don’t, is we know how to work as a tag team. That’s what you see when we’re out there.

The big question is whether there’s any team in this lineup that can come anywhere near us. 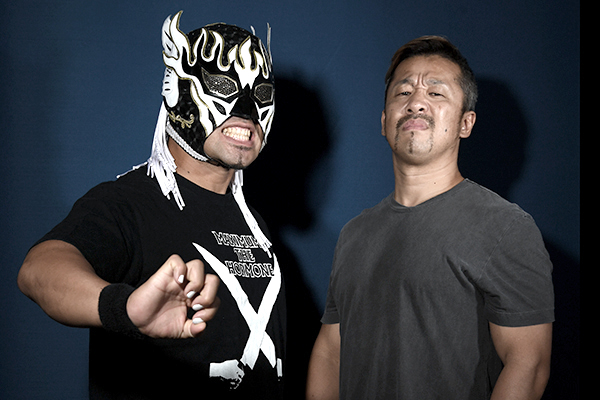 –On November 3 at Power Struggle, it’ll be the two top point scorers in the league against one another. Assuming you’ll make the final, who do you think will be joining you?

ED: Now that I think about it, one person missing in all this was in the finals last year. BUSHI.

ED: Hiromu didn’t make it in time. He’s been away ages. Well, I think it’d be a bit strange if the champions didn’t make it to the end. Last year we were in the final. This year, who has the belts? Ishimori and Phantasmo?

ED: Well, I like the CMLL guys, but I’m not sure they’ll last to the end. Romero and Taguchi could steal it, but I don’t see them being right there at the end. If not the champs, then maybe Eagles and Ospreay.

–What do you think, Kanemaru?

ED: Hey, ‘Nobu’s worn out! His batteries are gone! The last of the booze has left his system!

YK: Heheh. Here’s the thing. You talk about the champs, and I have to ask myself ‘who has the belts right now?’

ED: It’s not like they do a good job of hyping themselves. You’d have thought, when you have a Japanese guy and a foreign guy teaming together, the Japanese speaker should be able to talk up the team a little better.

YK: His partner’s no good for him.

–Back to throwing shade at Ishimori.

YK: At the end of the day, the big question is whether there’s any team in this lineup that can come anywhere near us. Right, Despe?

ED: Well put. The only other question is whether there’s any ring rust on me.

YK: I didn’t see a trace of it when you got back in the ring in Ryogoku.

–We should say in the interest of full disclosure, this interview is being conducted before Desperado’s return at King of Pro Wrestling.

YK: It’s all a foregone conclusion when it comes to our time to shine, this time of year.

–It’s yours for the taking?

ED: If I get hurt again, I’ll leave it all to DOUKI!