Tickets for Showdown in San Jose!

Meet and greets for San Jose!

Watch Showdown in San Jose LIVE and in English on NJPW World!

The full card has been revealed for New Japan Showdown in San Jose, with a stacked night of action in store for Bay Area fans. 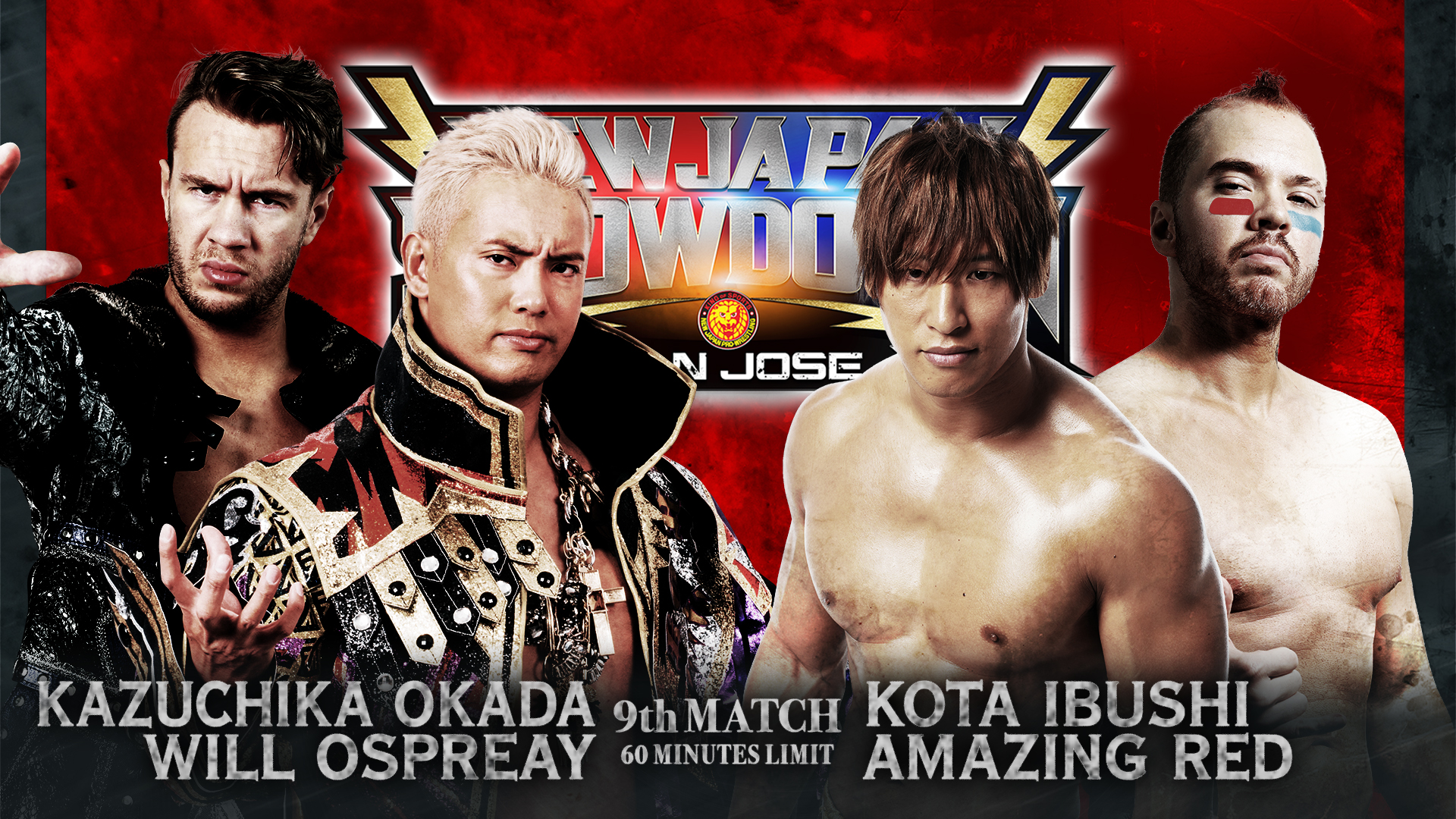 In the main event of the evening, a tag match with January 4 implications as Will Ospreay and Kazuchika Okada form a dream combination against another dream team of Amazing Red and kota Ibushi. After Kota Ibushi won the G1 Climax on August 12, he earned his way to the main event of January 4 and an IWGP Heavyweight Championship match against Okada. With the first main event at the Tokyo Dome now confirmed as part one of a historic Double Gold Dash, both Ibushi and Okada will have added motivation to ensure they are perceived as the ‘strongest and the best’ heading into January.

Will Ospreay will also have much to prove in San Jose. The IWGP Junior Heavyweight Championship match set for January 4 between he and Hiromu Takahashi is another guaranteed classic, and certainly main event worthy in its own right. Ospreay will look to show that he and the Ticking Time Bomb will steal the show on January 4, and he’ll be looking to do so against a man he had a bona fide match of the year contender with during the Super J-Cup: Amazing Red. 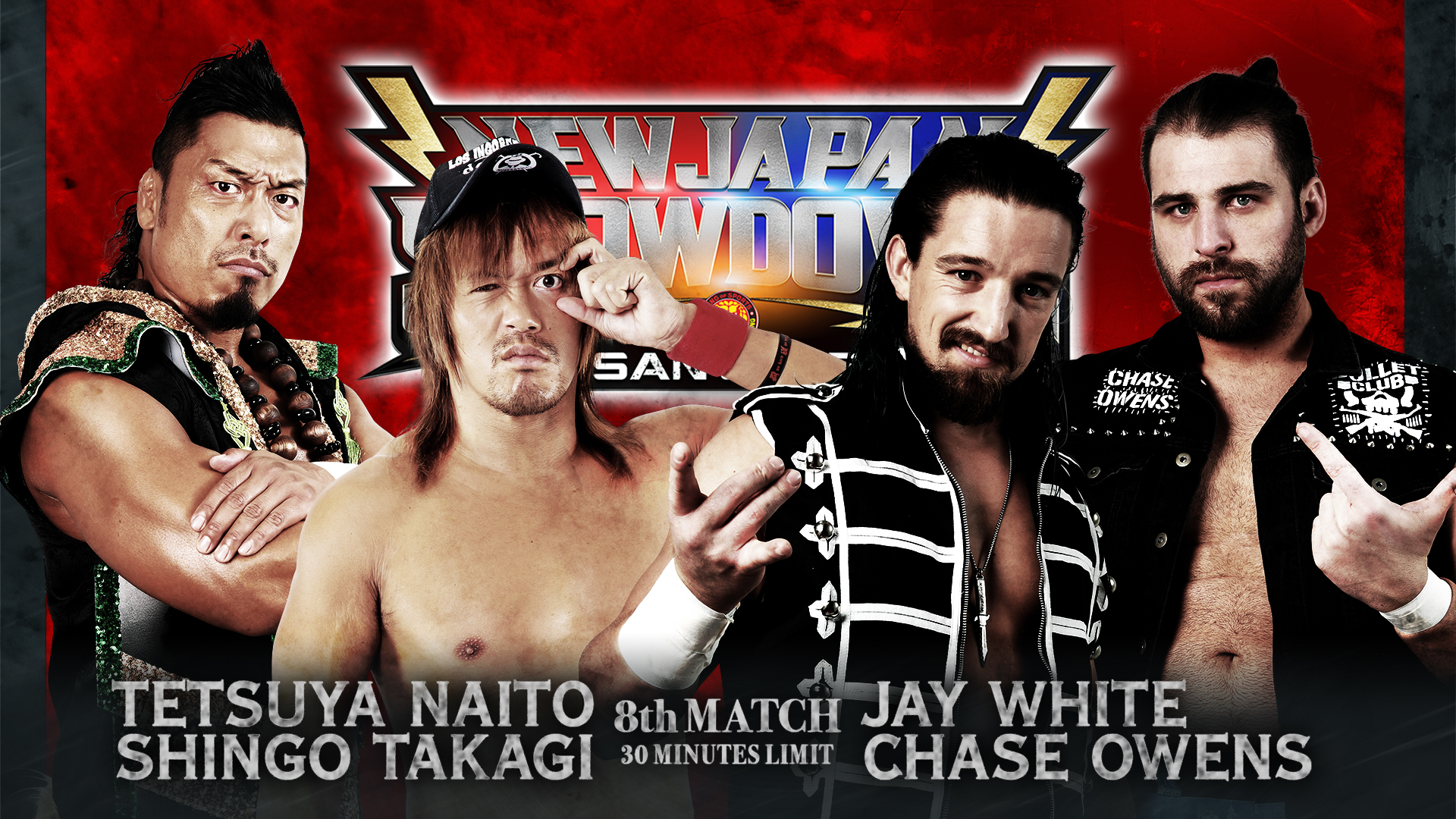 The eighth match of the night sees another tag team preview of January 4 as IWGP Intercontinental Championship opponents Jay White and Tetsuya Naito face off, each accompanied by a member of their respective stables in Shingo Takagi and Chase Owens.

Having beaten Naito on two separate occasions during the G1 Climax and again at Destruction in Kobe to lift the Intercontinental Championship, White feels that he is ‘done’ with Naito, having, in his mind, proven his superiority. Yet Naito is not to be denied, having dragged himself from what appeared to be his lowest ebb during the Road to Power Struggle to vanquish Taichi in fearsome form. Now the window is open for El Ingobernable to potentially attain his dream of double championship gold, but he’ll have to get through Switchblade steel to do so. This tag bout should be an intense sign of things to come between White and Naito. 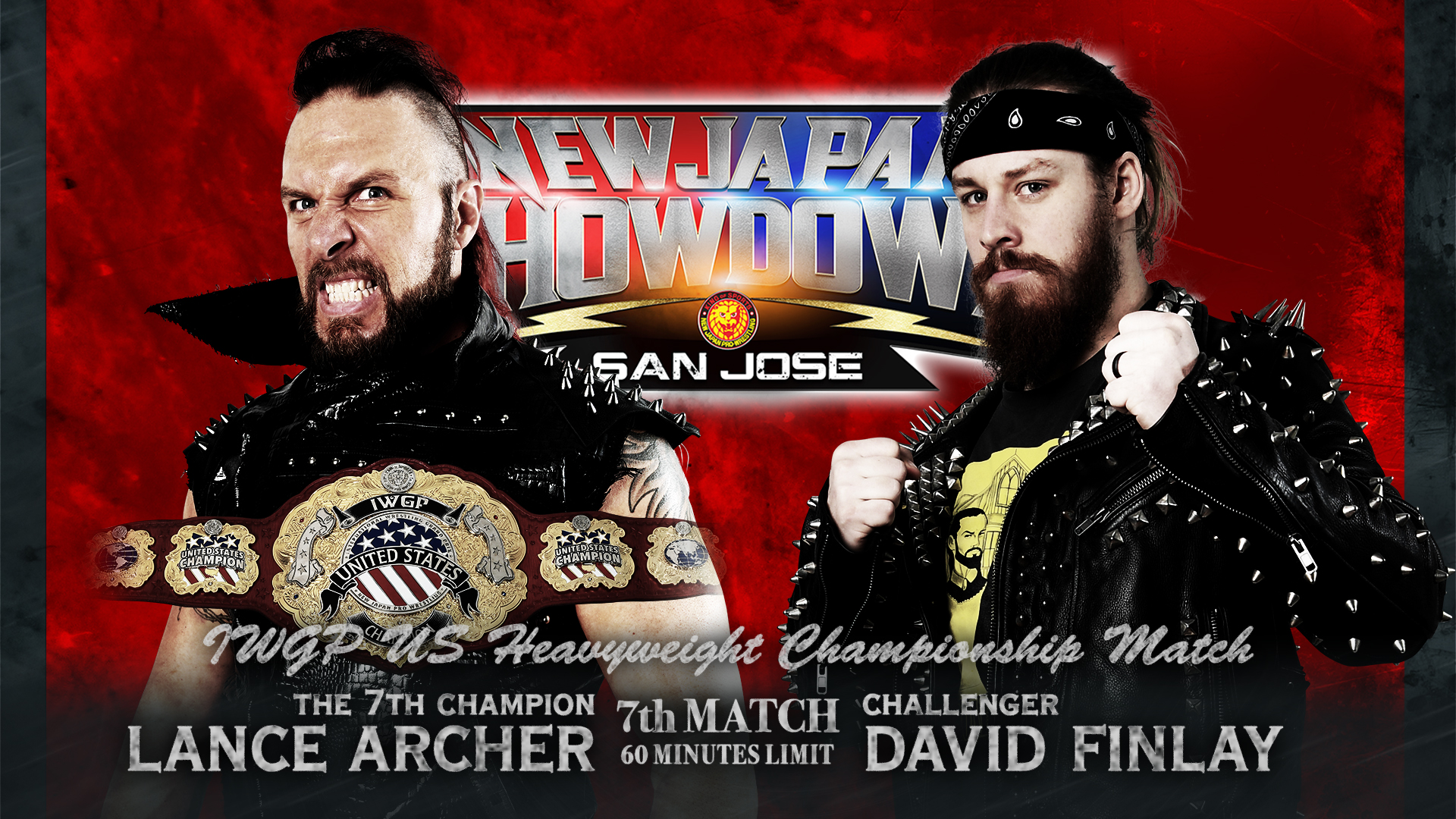 In October at King of Pro Wrestling, Lance Archer made the most out of a huge opportunity. Jon Moxley’s absence from the event due to travel issues meant that he had to relinquish the IWGP United States Heavyweight Championship, and Archer was a last minute substitute in a title match for the now vacated belt.

The Muder Hawk Monster was victorious in a wild no disqualification bout, as he delivered Blackout onto a pile of steel chairs to Juice Robinson. Archer kept the assault going after the match, but it was David Finlay who made the save for his best friend and tag partner.

Finlay had been out of action since February with a shoulder injury, but made an impact on his return, delivering Prima Nocta to the new US Champion. Archer wouldn’t let this interruption of his celebration go unforgiven. Running rampant in Osaka at Power Struggle, Archer took the microphone and demanded that his first defence of the title be on US soil against Finlay. Can the returning Finlay score championship gold out of the gates? Or will Archer retain his first singles title by any violent means necessary? 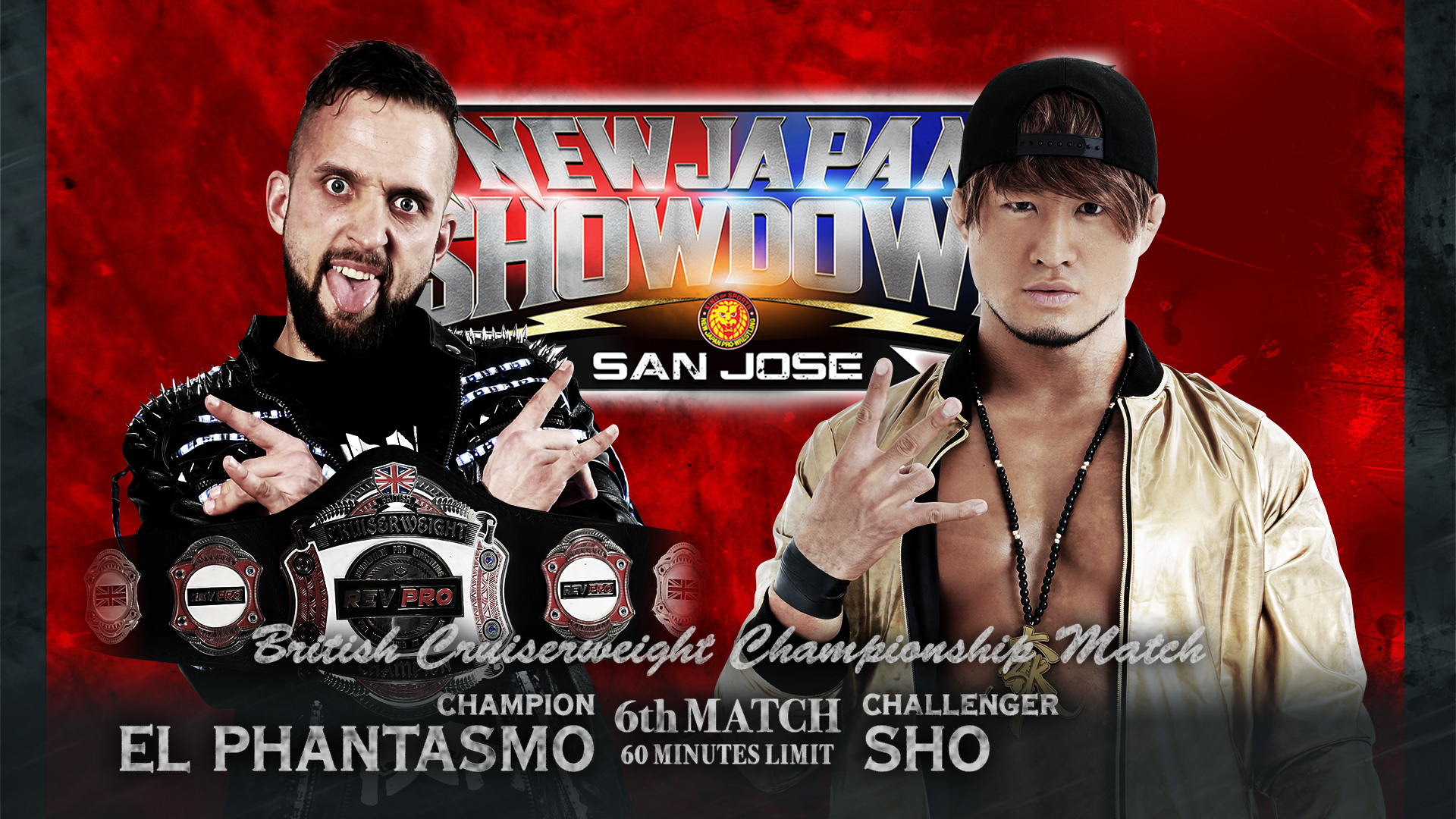 Championship history will be made in the sixth match of the evening, as the RevPro Undisputed British Cruiserweight Championship will be defended in the United States for the first time. Its champion is a man who has dominated the global conversation around junior heavyweight wrestling in 2019; El Phantasmo. ELP first came to NJPW in May at Dontaku and instantly made his mark by pinning Will Ospreay. Since then, he won the Cruiserweight Championship in the UK, and defended the title in its home country as well as Japan and Australia, all the while amassing IWGP Junior Heavyweight Tag Team Championship gold and the Super J-Cup gold jacket to boot.

Yet as huge and justifiable as ELP’s ego is, it can also be his undoing. With a distinct edge for he and partner Taiji Ishimori in the points standings, over confidence in his last Super Junior Tag League match against Roppongi 3K led to SHO scoring the pinfall on Phantasmo with a Shock Arrow. SHO would then gut through back injury to bring he and Roppongi 3K partner YOH to victory in the Super Junior Tag League final two nights later. Their match for the IWGP Junior Heavyweight Tag Team Championships on January 5 in the Tokyo Dome is now secured, but SHO can gain a huge singles upper hand in San Jose, not to mention his first career singles championship. 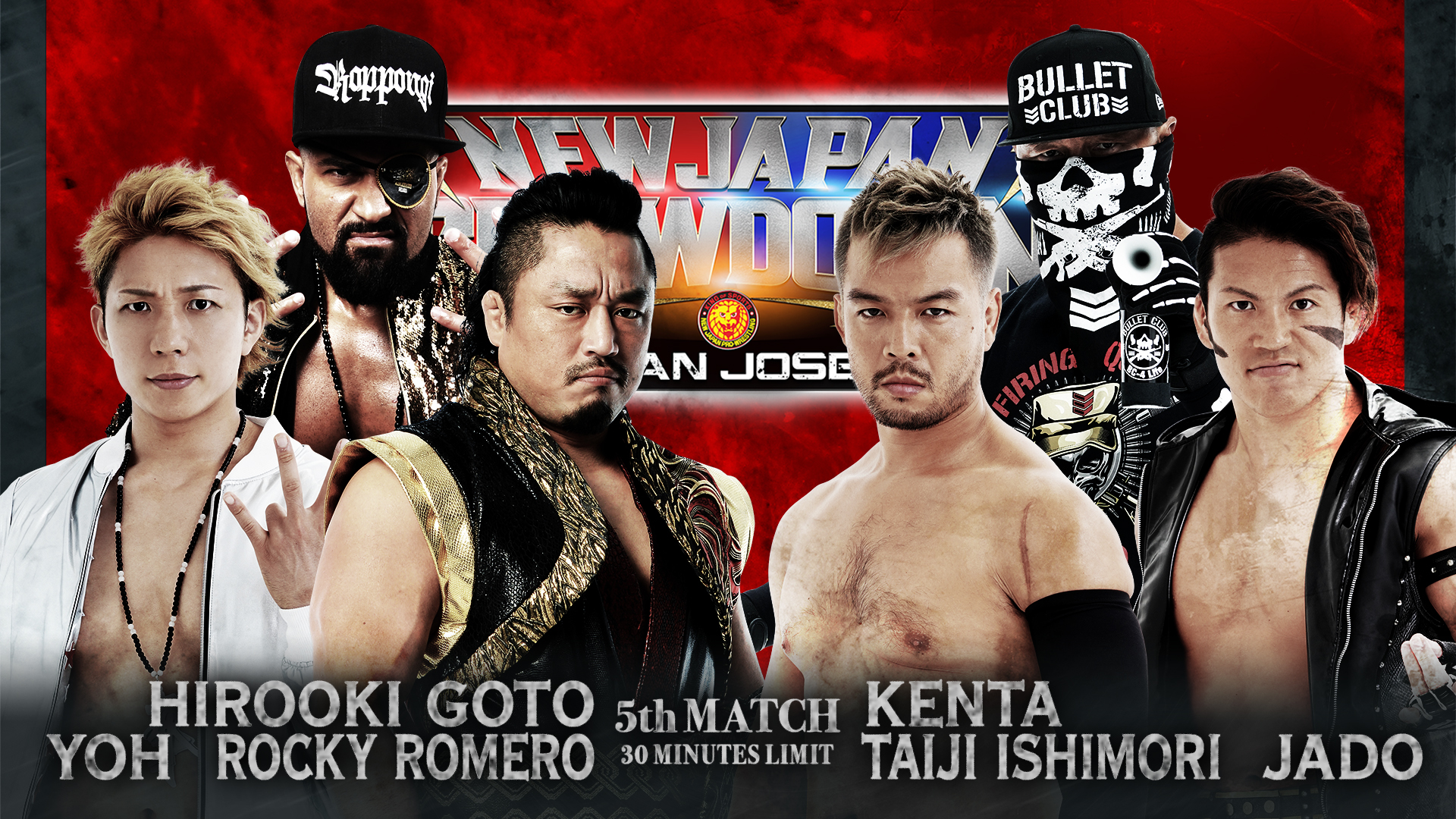 Six man tag team action in San Jose will see two trios ready to make a mark on the road to the Tokyo Dome. YOH and Ishimori will meet, along with SHO and El Phantasmo, on January 5 for the IWGP Junior Tag Team Championships, but NEVER Openweight Champion KENTA is without an opponent for either January 4 or 5 so far. For now at least, he may find a dance partner in Hirooki Goto, after he intervened in Goto’s Intercontinental Championship main event with Jay White at Power Struggle and brutally assaulted Goto’s best friend, and inactive wrestler, Katsuyori Shibata. Consequences will have to be paid at Showdown. 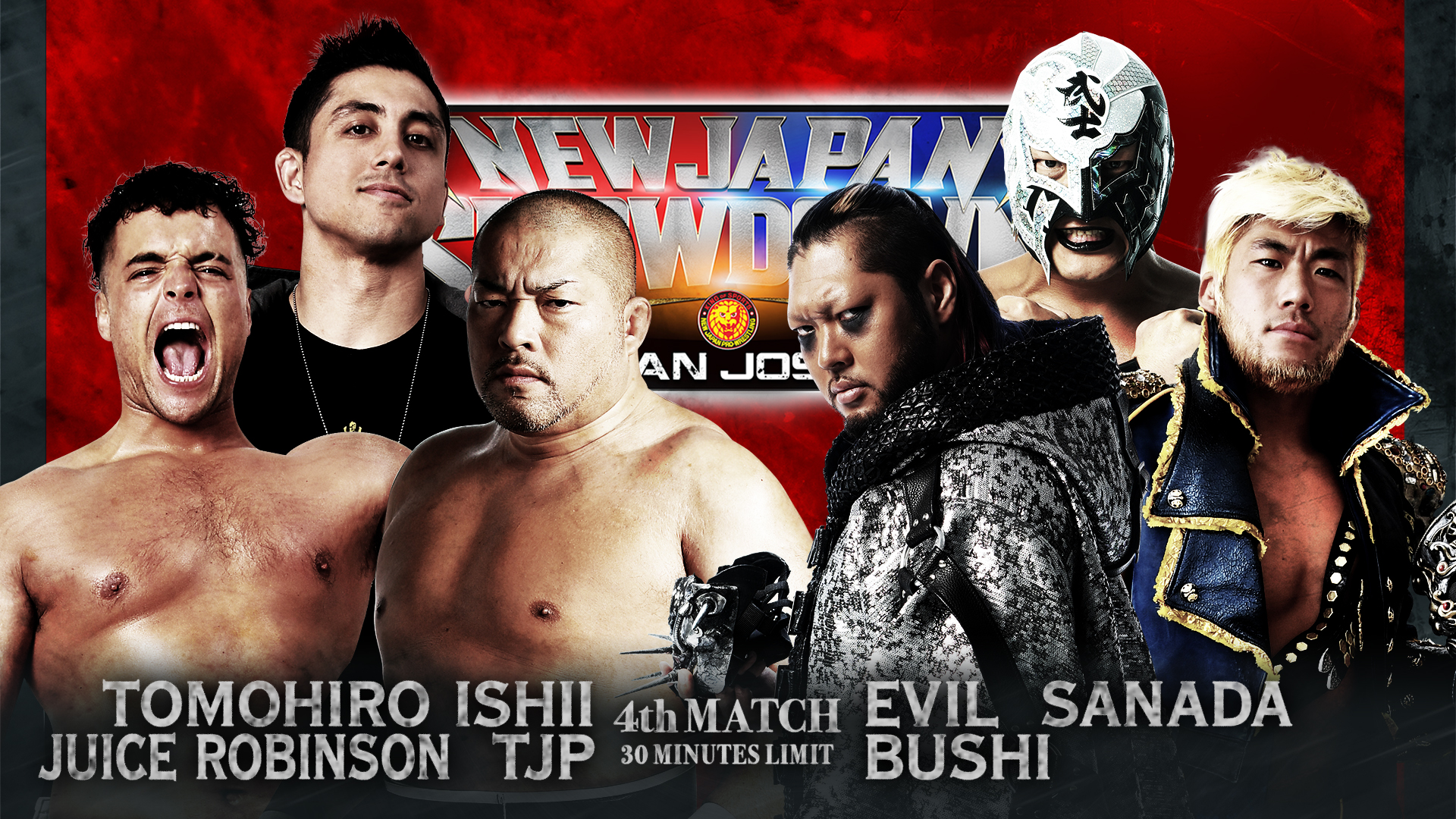 Juice Robinson makes his first appearance in an NJPW ring since his October United States Championship loss in this six man tag opposite LIJ’s BUSHI, SANADA and EVIL. With a lot of questions to answer for all six of these men as we get on the road to the Tokyo Dome, what statements will be made in the San Jose Civic? 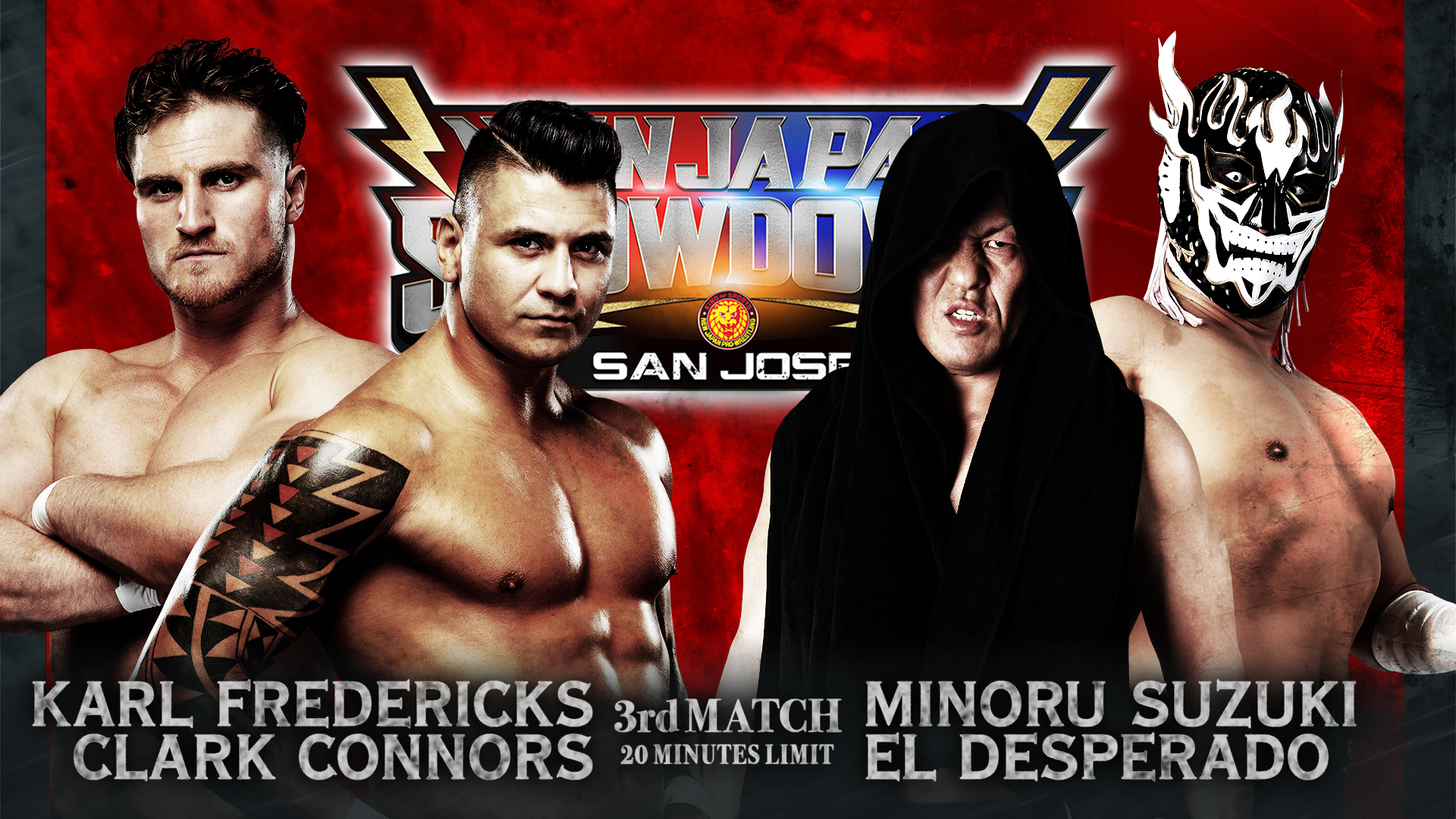 With Karl Fredericks winning the Young Lion Cup, and Clark Connors impressing many with his aggression and determination through the Super Junior Tag League as he partnered with TJP, there is a tremendous upside to these two Katsuyori Shibata students. That upside may be cut brutally short by Suzuki-Gun however. El Desperado and Yoshinobu Kanemaru were squeezed out of Junior Tag League glory by SHO and YOH in Osaka, and Minoru Suzuki is always violent, especially against young dojo blood. 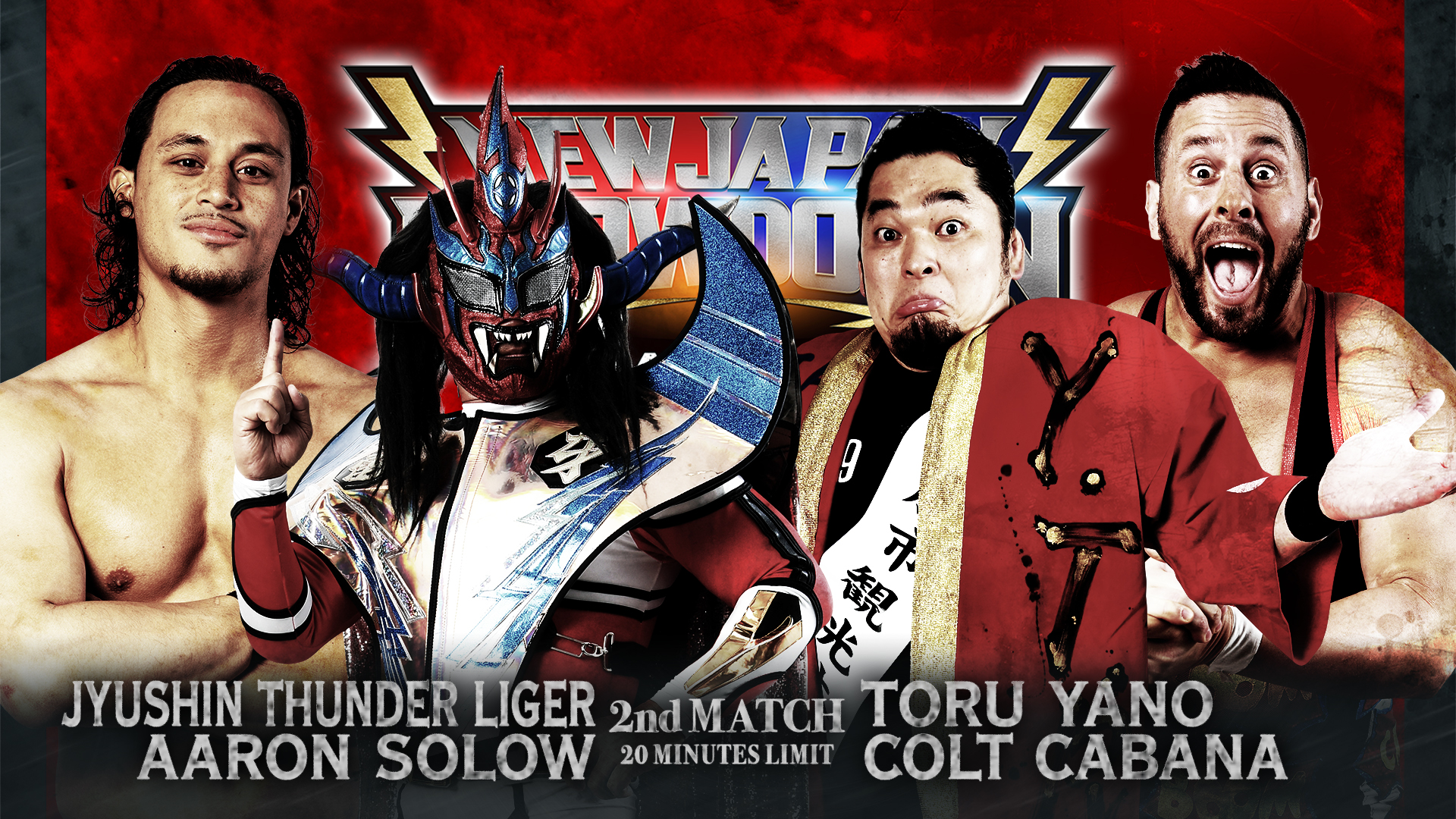 The second match of the evening will see Jyushin Thunder Liger wrestle for the last time in the US in a unique environment, teaming with Aaron Solow against Toru Yano and the returning Colt Cabana. Cabana and Yano made a cult combination through the spring after Cabana made his New Japan Cup debut. They will likely bring some interesting combination attacks against the first time pairing of Liger and Solow.

Solow himself is returning to NJPW action after wrestling his first matches in the cerulean blue back at Southern Showdown in Australia this June. Having spent the last several months honing his skills in the Fale Dojo, he now has the opportunity to make a mark alongside a legendary partner. Liger’s last match on American soil is sure to have its share of memorable moments. 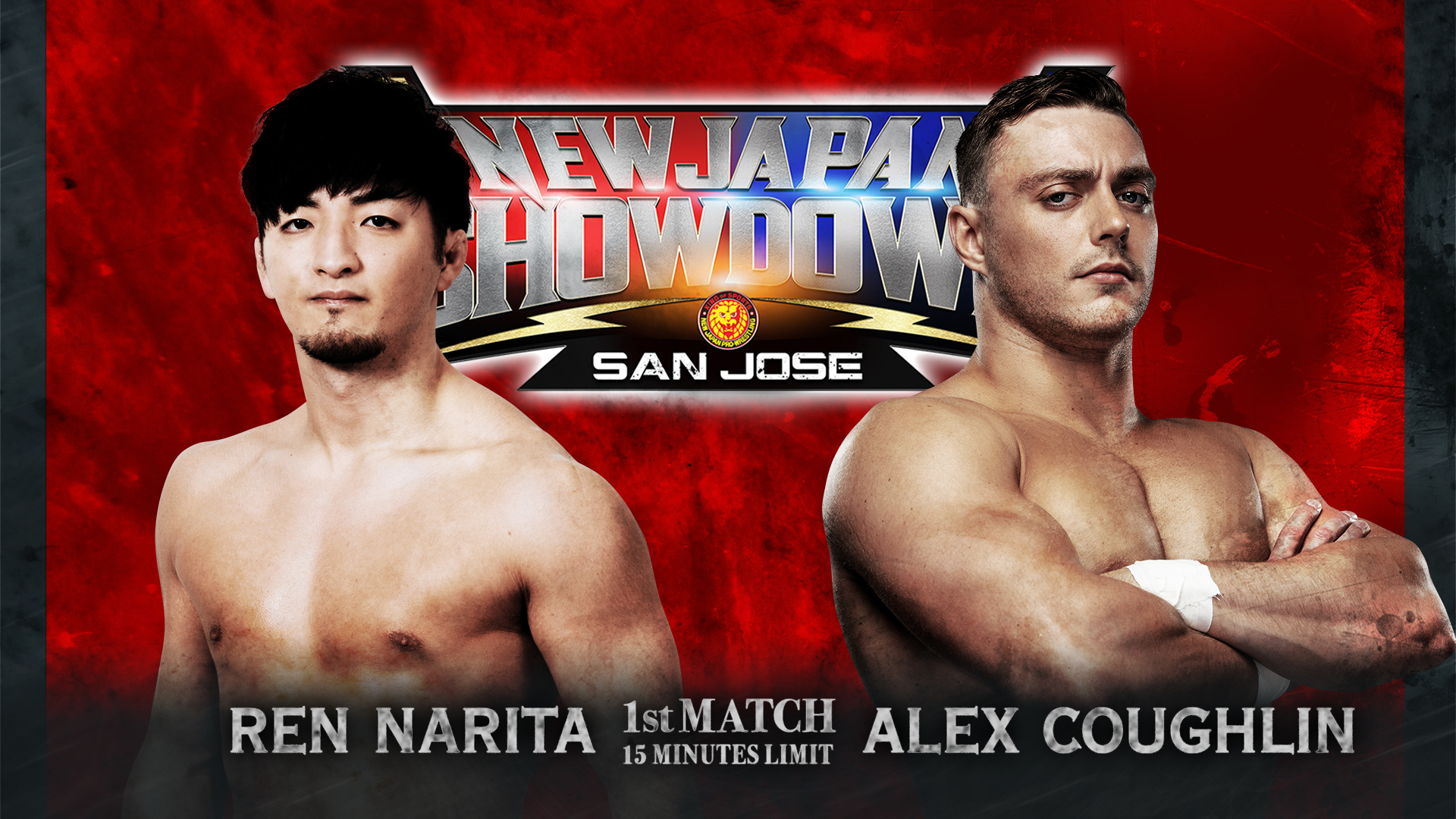 In the first match of the evening, we see Ren Narita, recently relocated to LA on excursion, take on LA Dojo original, Alex Coughlin. When these two men met in the Young Lion Cup, it was Ren Narita scoring the win with his Narita Special #4 suplex. Can the softly spoken, hard hitting Coughlin get payback to kick off Showdown in San Jose?