Bread Club 4 Loaf: Satoshi Kojima and his love for bread

Satoshi Kojima is a simple man. The English portion of his Twitter bio expresses as much: ‘I am a pro-wrestler who loves bread’. His penchant for all things dough based has seen the ‘BREAD CLUB’ grow to a worldwide movement of fans. But just what does Kojima enjoy about bread, and what does he eat on a regular basis? NJPW1972.com elected to find out by heading to Bread Plant OZ in Tokyo’s Meguro district.

I’ve been given so much bread from fans. 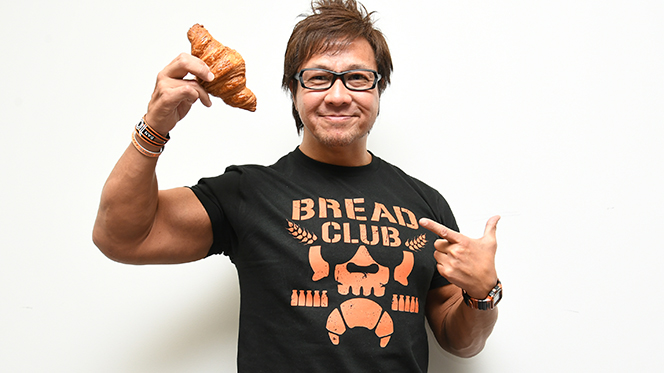 (T-shirt made just for this article- not for sale!)

–OK, we have to know. Just what is BREAD CLUB and how is it organized?

Kojima: Well, it isn’t exactly a real thing! (laughs) I was just messing around with the BULLET CLUB name for a joke, but it spread on Twitter and people made a logo, that kind of thing. It took off more with fans overseas than in Japan; especially the UK for some reason. A wrestler I faced there asked if he could be in, and I’ve been given *so much* bread by British fans.

–This shirt we made for the interview has your nose tape on it, and we’ve got croissant and bread accents… It took a lot of work!

Kojima: I see that! Well, depending on how well this interview does, maybe all sorts of things are possible! This might be the new nWo shirt of the 2020s!

Kojima: It would be doing my part in introducing delicious bread to fans all over the world. #BREADCLUB, baby!

I’d heard this place was famous for its baguettes, but man they are amazing! 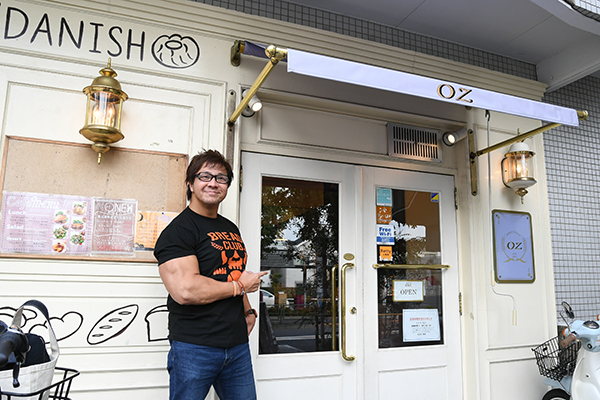 Kojima entered the shop like a kid in a candy store, or Kojima in a bakery, which he is and it was. OZ is some walk from the nearest station, but is a hugely popular bakery which is always bustling even on a weekday. Kojima eagerly filled his tray with baked goods as we continued our conversation. 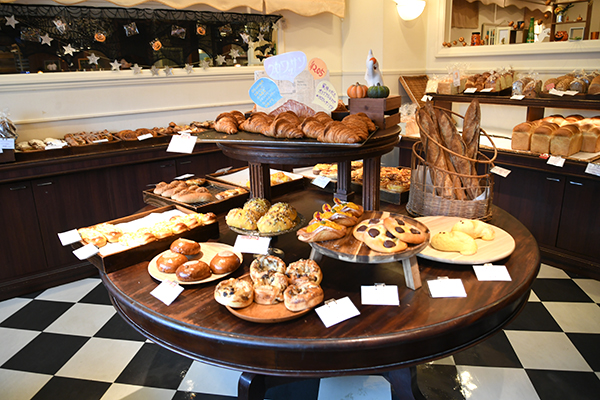 –You’re somewhat of a regular to OZ?

Kojima: Every time I hear of a place with good bread, I have to give it a shot.

Kojima: I used to pass this place on my way to the Dojo and I’d stop in. I’d heard it was famous for its baguettes, and man, they are amazing! It sounds like such a cliche, ‘crispy on the outside and soft as silk on the inside’ but it’s the truth. This is definitely the best place I’ve ever been to.

–They apparently cultivate their own yeast, and have four types of flour.

Kojima: Not just that but their donuts and sweet breads, as well as the ones with cheese and corn, those are great. See, when you’re in the bread business, sweet and savory are practically different worlds. Just because it’s all baked, doesn’t make them the same. But here, you can eat perfect examples of both! 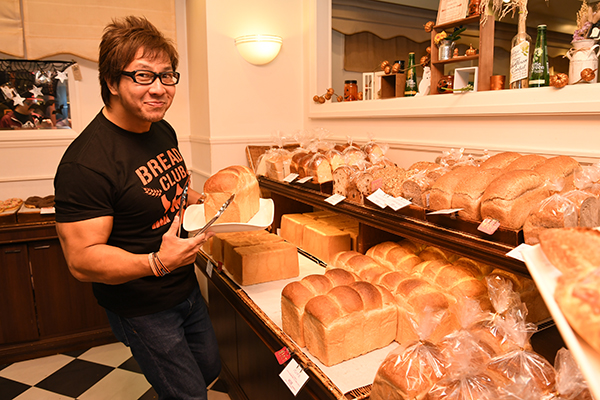 –High praise! So, how often do you come here?

Kojima: Oh, monthly? No, weekly? More than that?

–That’s more than just a regular!

Kojima: I was speaking to the manager here. I was surprised he knew I was a wrestler! It was a little embarrassing.

–Come as regular as you do and you don’t need to be famous for him to know who you are! 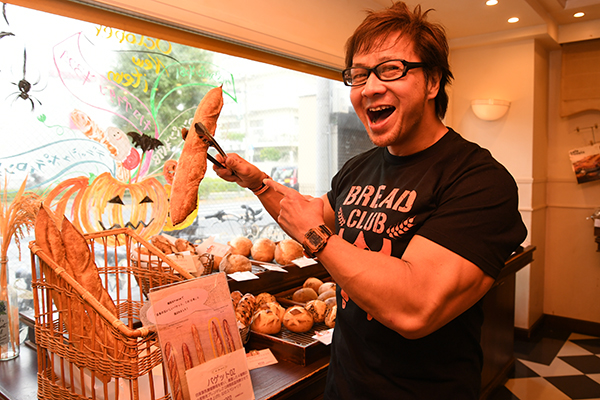 When surrounded by, and consuming baked goods, we see an altogether different side of Satoshi Kojima.

–So, you said you’ll always check out a new bakery. What’s the first thing you try?

Kojima: It’s always baguettes. Baguettes are the bread and butter of bread and butter (laughs). If the baguettes in a place are good, everything is! So maybe at first I just get a baguette, as a trial. Then I might pick up something else.

–Do you take the bread home to eat? Or do you ever just eat the bread as soon as possible, in your car?

Kojima: It has to be right away! I can never wait, so I eat the baguette in the car and then if it’s any good, I go straight back into the shop.

–That must be pretty surprising to the staff in the bakery! So, do you know when you started to like bread?

Kojima: I remember as a kid, after school on a Saturday I’d get bread from a bakery on the way home. I liked convenience store bread just fine, but bakeries were special. The smell of a bakery gave me goosebumps! 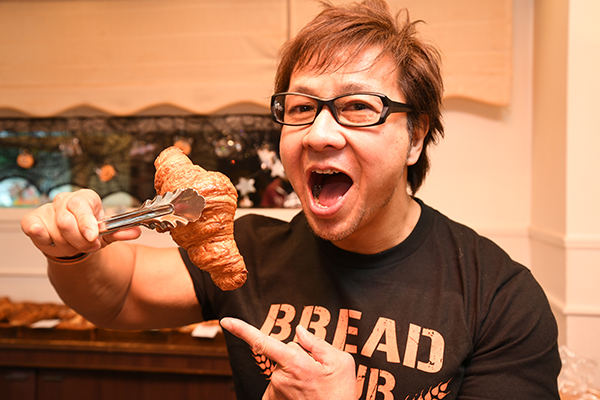 –The kind of adrenaline only bread gives you!

Kojima: you might laugh, but it’s true! There’s a special air around bakeries, a special happiness. When I was a kid, curry donuts and egg sandwiches were the staple, but depending on the place you get a lot of variation in quality. A truly amazing curry donut is hard to come by!

–Japanese curry donuts are curry encased in a fried bread. That obviously tastes good, but it’s difficult to stand out and be special, one would imagine.

Kojima: Exactly. You can buy them anywhere, and they’re good everywhere, but it’s rare to find one that’ll knock you off your feet. I recommend getting the ones with egg in at a place called Antendo!

I eat white rice at lunch and dinner, but then I’ll turn around and eat bread too. Rice for main, bread for dessert! 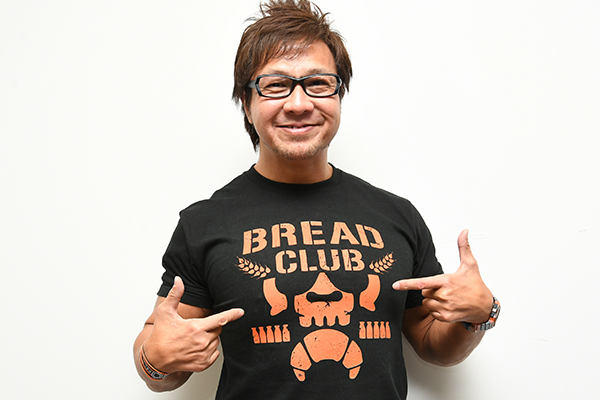 –You are a rare case… So you start your day with bread?

Kojima: Bread for breakfast? Oh, yeah. Today I just got some white bread from the convenience store, but lately there are places that just specialize in loaves of bread.

–There are different variants aren’t there? ‘Lightly baked’, ‘high grade’…

Kojima: Ah, I love them all… There’s lots of ways you can eat it but I usually just eat the bread on its own. Maybe toasted a little, but even then with nothing on. You can put butter on there, but the flavour profile changes… I used to get breakfast bread at this popular place, but they’d put whipped cream and stuff on there. Pretty high calorie, I thought.

–Do you go in for the other varieties?

Kojima: If it’s good bread, I’ll keep my spectrum broad. Start the day with a really special bread and it really changes your outlook and your mood for the whole day.

–I get eating bread for breakfast, but how about other meals?

Kojima: I eat white rice at dinner, but then I’ll turn around and eat bread too. Rice for main, bread for dessert!

Kojima: Well, then it’s more a sweet thing, a donut or something with chocolate in. But I’ve gotta have my flour! And not in noodles or ramen or anything. It has to be bread. Bread is special.

–You love bread even more than I thought.

Kojima is always on the lookout for good bakeries when he’s on the road! Follow him @cozy_lariat and tag him with your favourite places using #BREADCLUB!