Korakuen Hall is completely SOLD OUT on January 19! Watch all the action LIVE and in English on NJPW World! 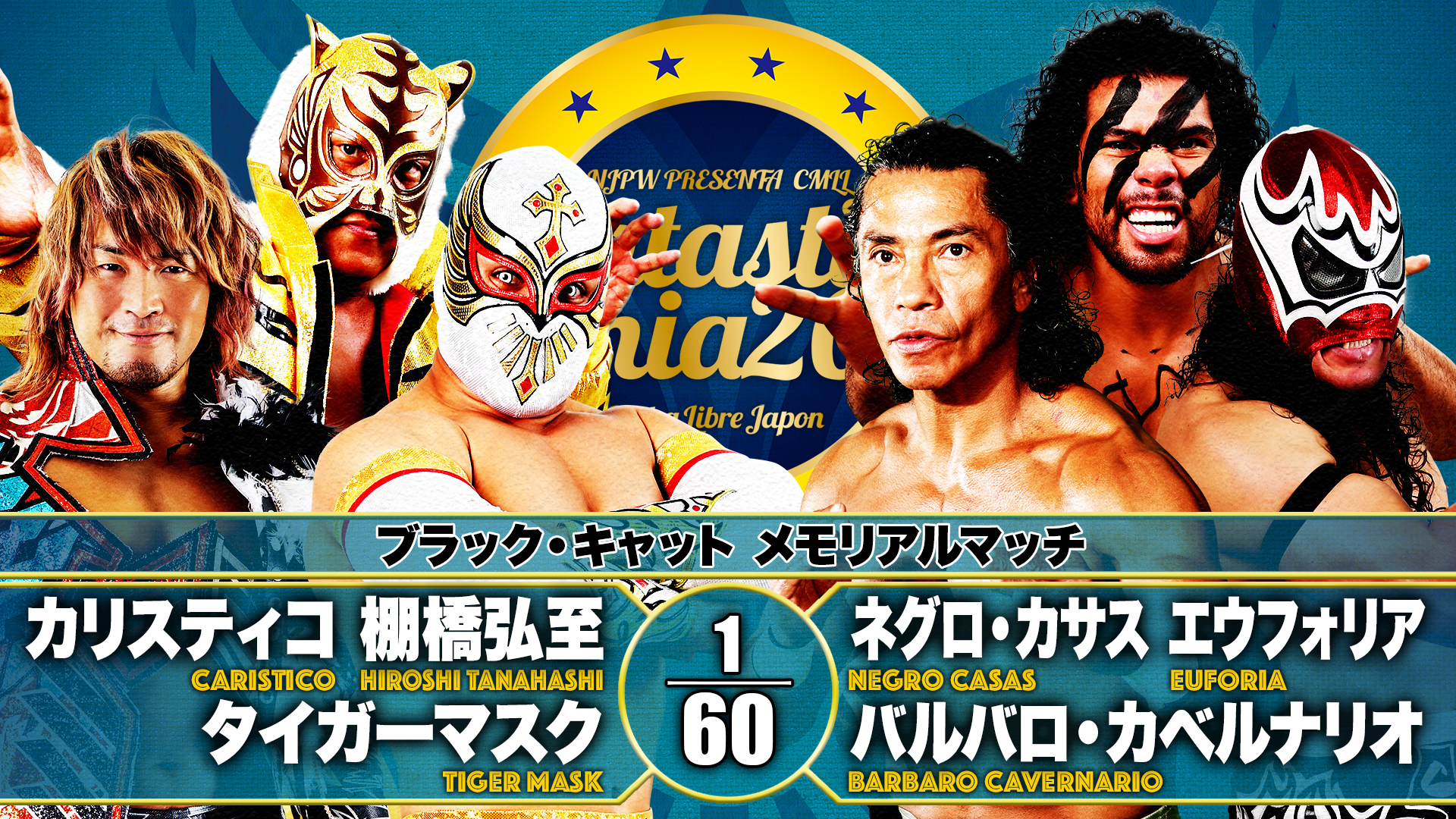 A tradition now a decade long, the Black Cat memorial match has been part of every Fantasticamania, and headlines this Korakuen evening, as we honour one of the most important bridges between Mexican and Japanese wrestling cultures. Black Cat was a member of the Sito wrestling family in Mexico and got his start in the 1970s, before heading to NJPW on excursion in 1981. From there, and especially into the 1990s, he was a critical trainer and go between for Mexican talent in Japan, up to his unfortunate passing in 2006.

That blend of Mexican and Japanese, that helped spark the ‘lucharesu’ revolution in the 1990s is well represented in this six man tag main event. No mere exhibition, Tanahashi Tiger Mask and Caristico will pull out all the stops against Cavenario, Euforia and the legendary Casas. 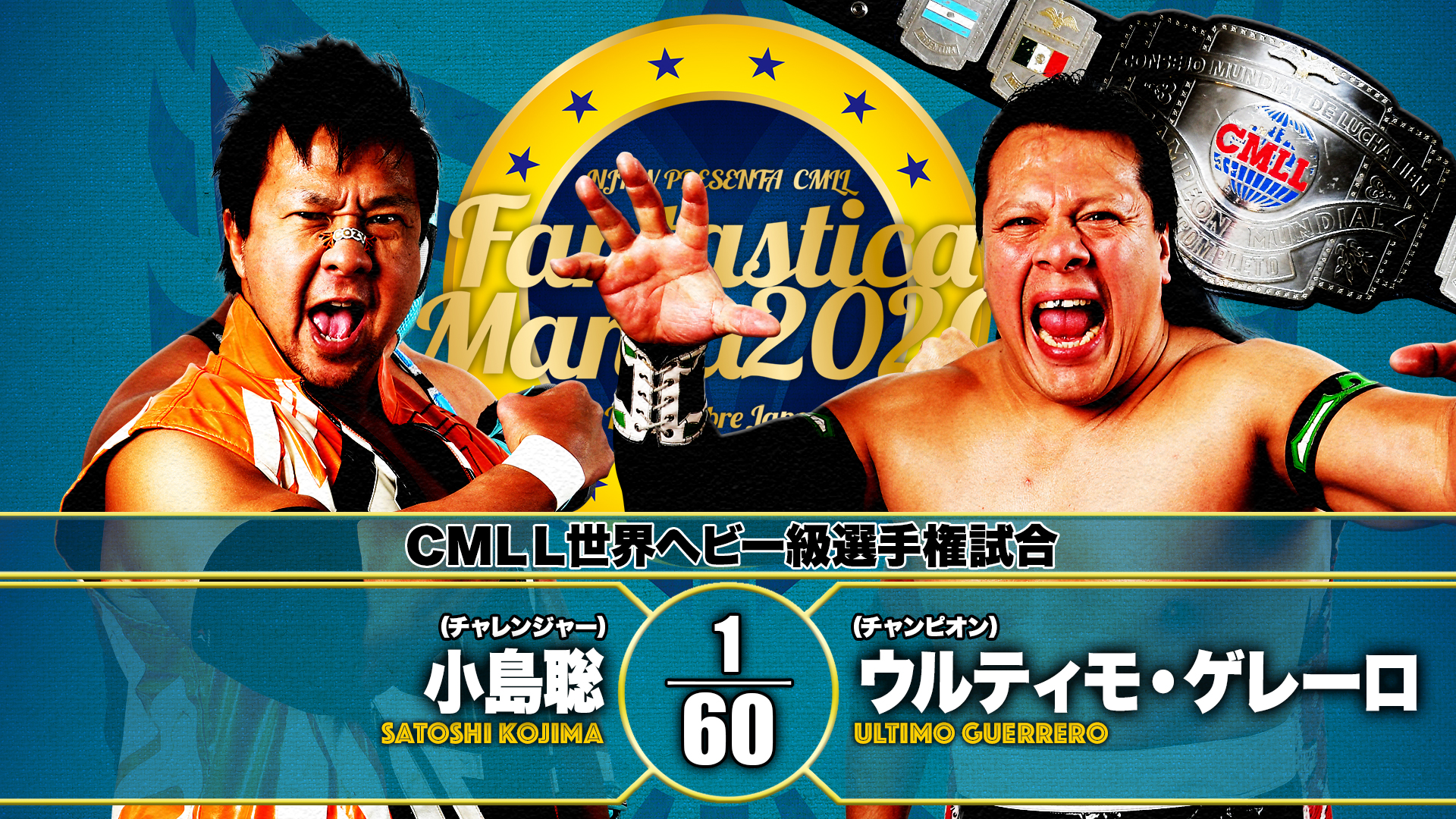 In thew semi-main event of the evening, Satoshi Kojima will challenge CMLL World Heavyweight Champion Ultimo Guerrero, as he looks for his first championship gold in three years.

Guerrero, the 20th CMLL Heavyweight Champion since the title’s inception in 1991 has been a dominant one, holding the title 460 days and heading into his seventh defence. His title defence scalps have joined some almost literal ones, as Guerrero managed to take the hair of Negro casas as a result of a cage match in CMLL last year.

For Kojima, a tall mountain to climb then. His last singles bout was a victory against Yota Tsuji in October, but his last title win was in the same year as the last defence of this championship in Japan, 2017. In the last two Fantasticamania tours, Kojima has put up fierce fights but ones that ended in defeat to Rush and Terrible. Friday at Korakuen however, a lariat led to victory for the strongest arm. Can he turn momentum into championship glory? 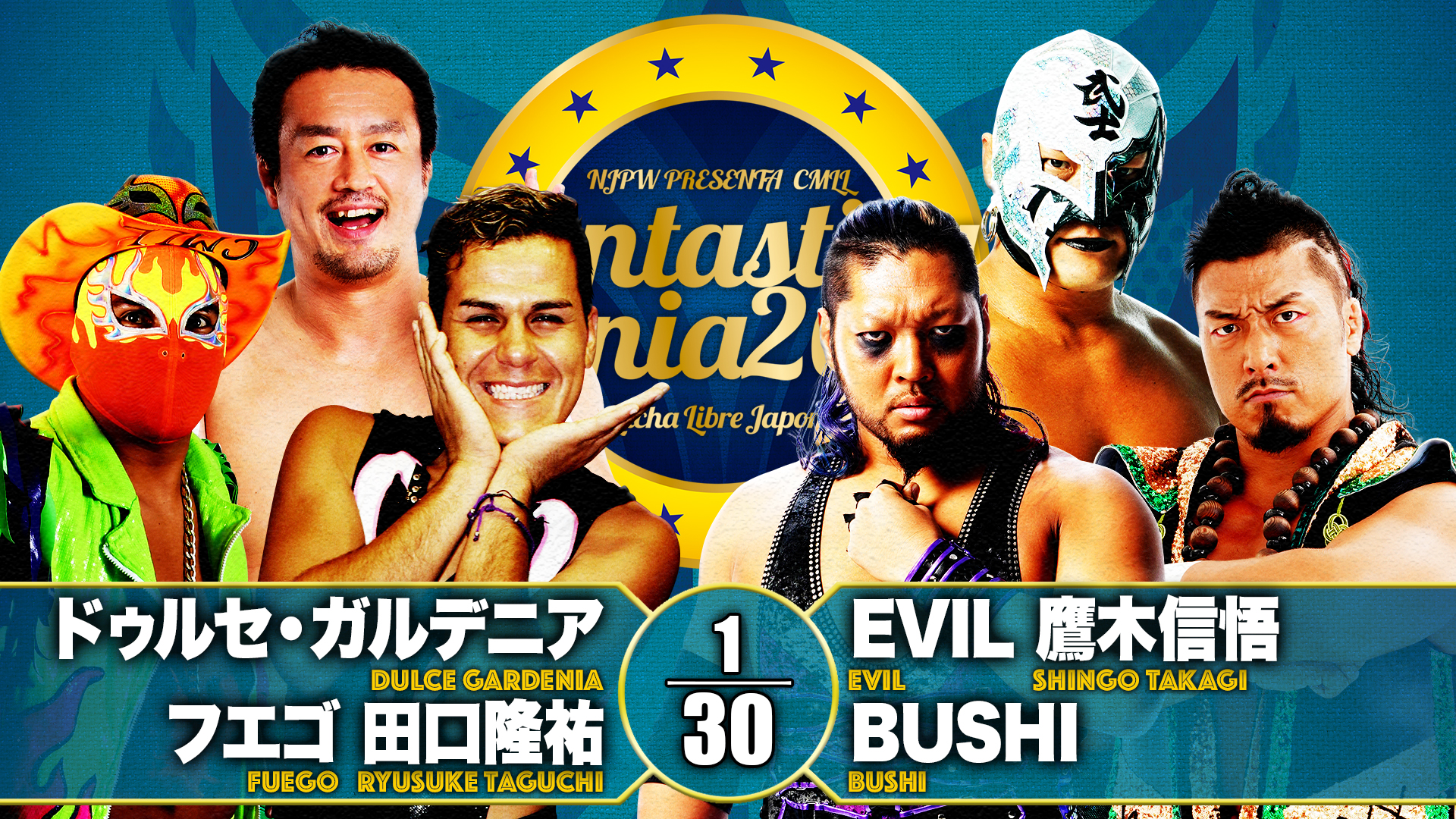 In our fifth match of the evening, with Hiroshi Tanahashi in the Black cat Memorial, the exotic excellence of Dulce Gardenia will find different partners in Fuego and Ryusuke Taguchi as they take on Shingo, EVIL and BUSHI. Taguchi’s record setting NEVER 6-Man Championship reign alongside Toru yano and Togi Makabe was brought to a crashing halt by the new NEVER champions on January 5. In this non-title trios bout, can he and his fiery companions stake a claim to get the titles back? 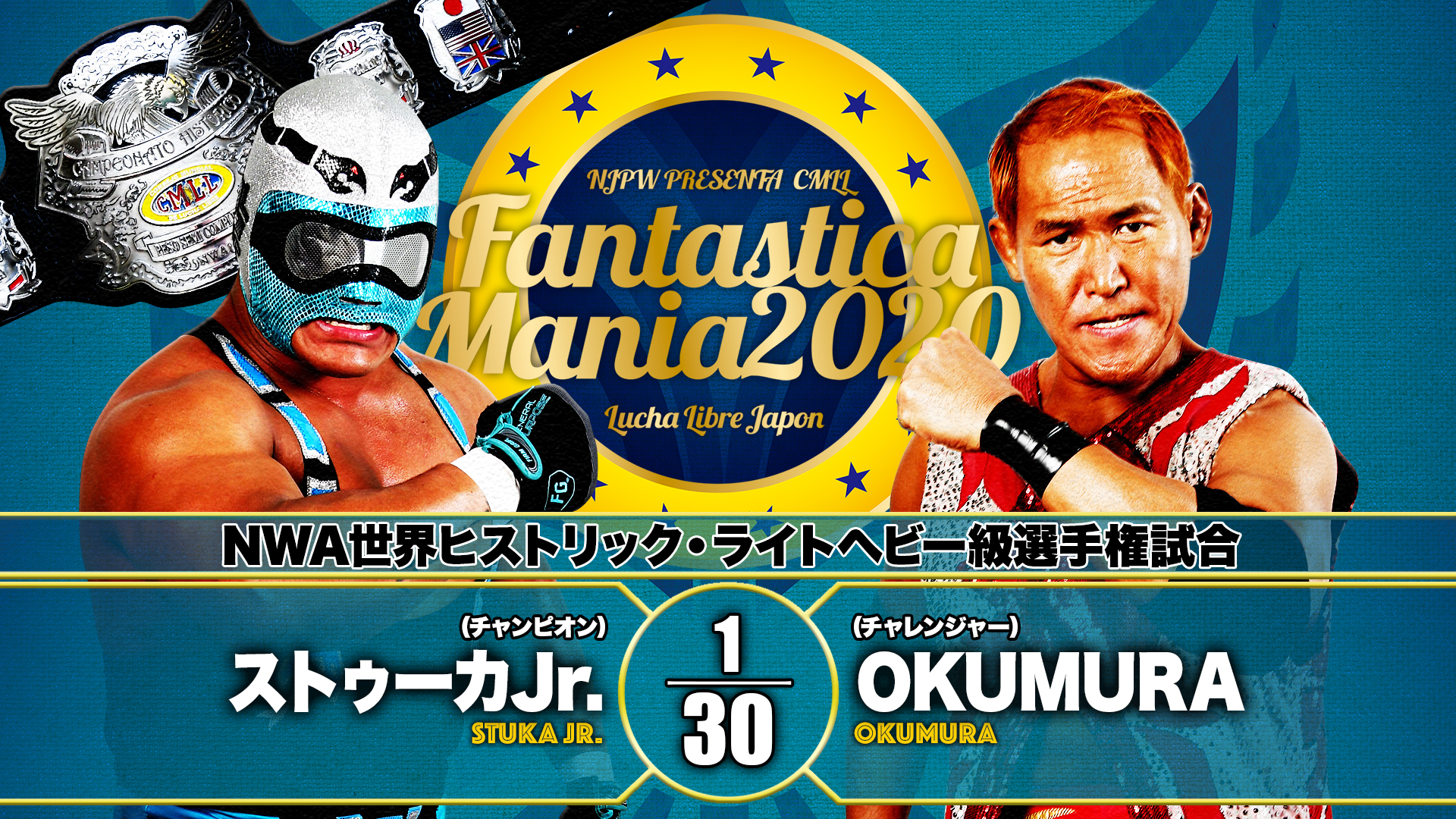 Stuka Junior will take on OKUMURA one on one in Korakuen Hall. Stuka has been part of Fantasticamania tours since 2014, but this is his first appearance in the annual fiesta since 2017, a tour highlighted, by the way, with a win over OKUMURA.

The Japanese rudo hasn’t forgotten, and he and Stuka have been at loggerheads throughout the Fantasticamania tour. After OKUMURA swiped Stuka’s famous mask, the luchador yelled that he would take his opponents hair in revenge. As stakes continued to rise, OKUMURA would tell Korakuen Hall on Friday that he wanted Stuka Junior to put his NWA Historic Light Heavyweight Championship up for grabs.

Now that title match is made official. OKUMURA’s singles record over the last three FM tours is a shady 1-2, but in singles competition over 2019 in Mexico and Japan, he logged a positive 3-2 record; still, Stuka was a more impressive 7-3. Will the numbers spell disaster for OKUMURA at Fantasticamania? 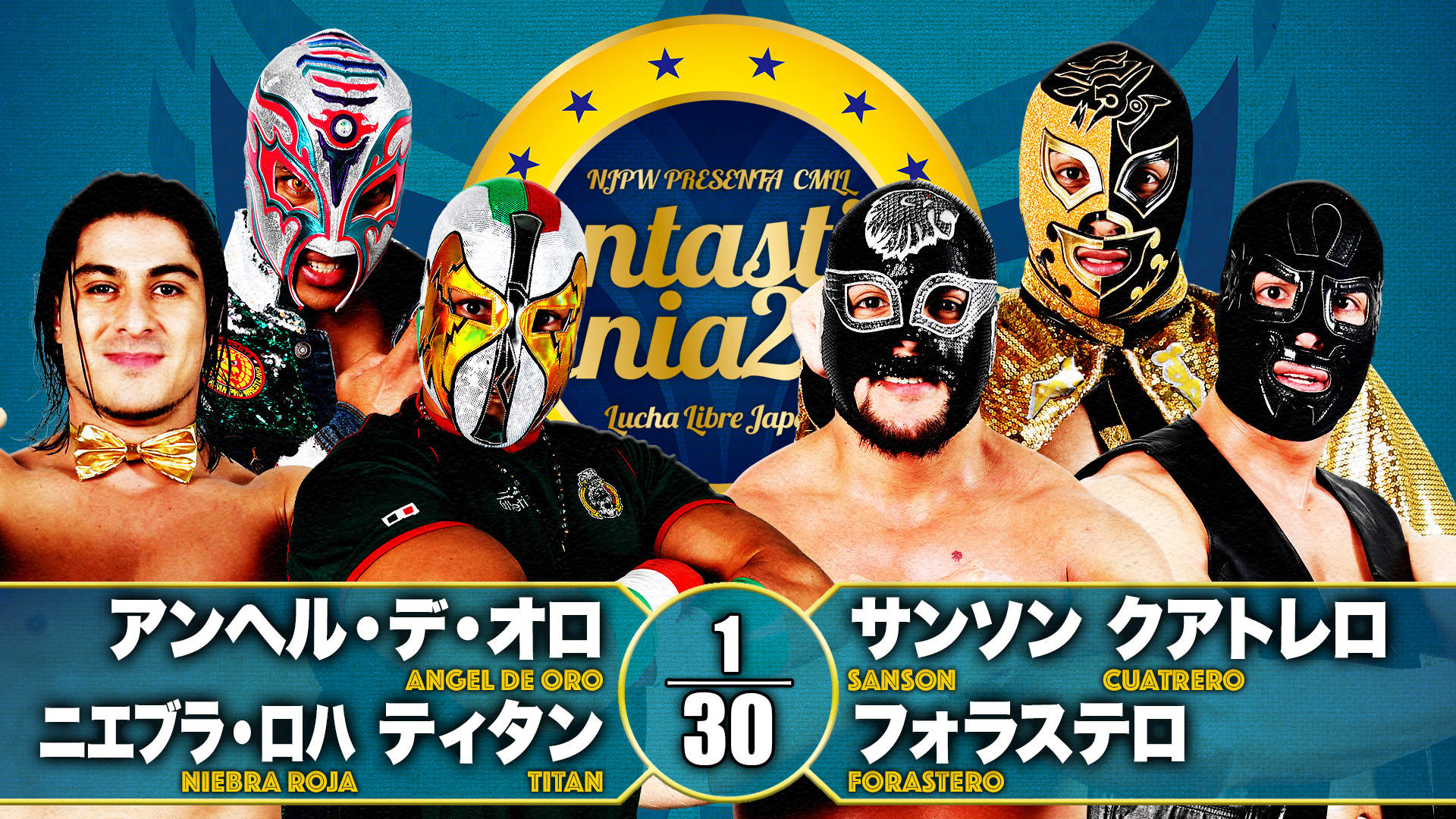 After the first two nights from Korakuen see Cuatrero and Forastero in the family tag tournament, Nueva Generacion Dinamita are finally together as a trio on the third of four Korakuen Hall nights. One of the most dominant trios in CMLL defend their CMLL National 6-Man Tag Team Championships against Oro, Titan and Roja on Monday January 20, but 24 hours beforehand we’ll get a non-title preview. 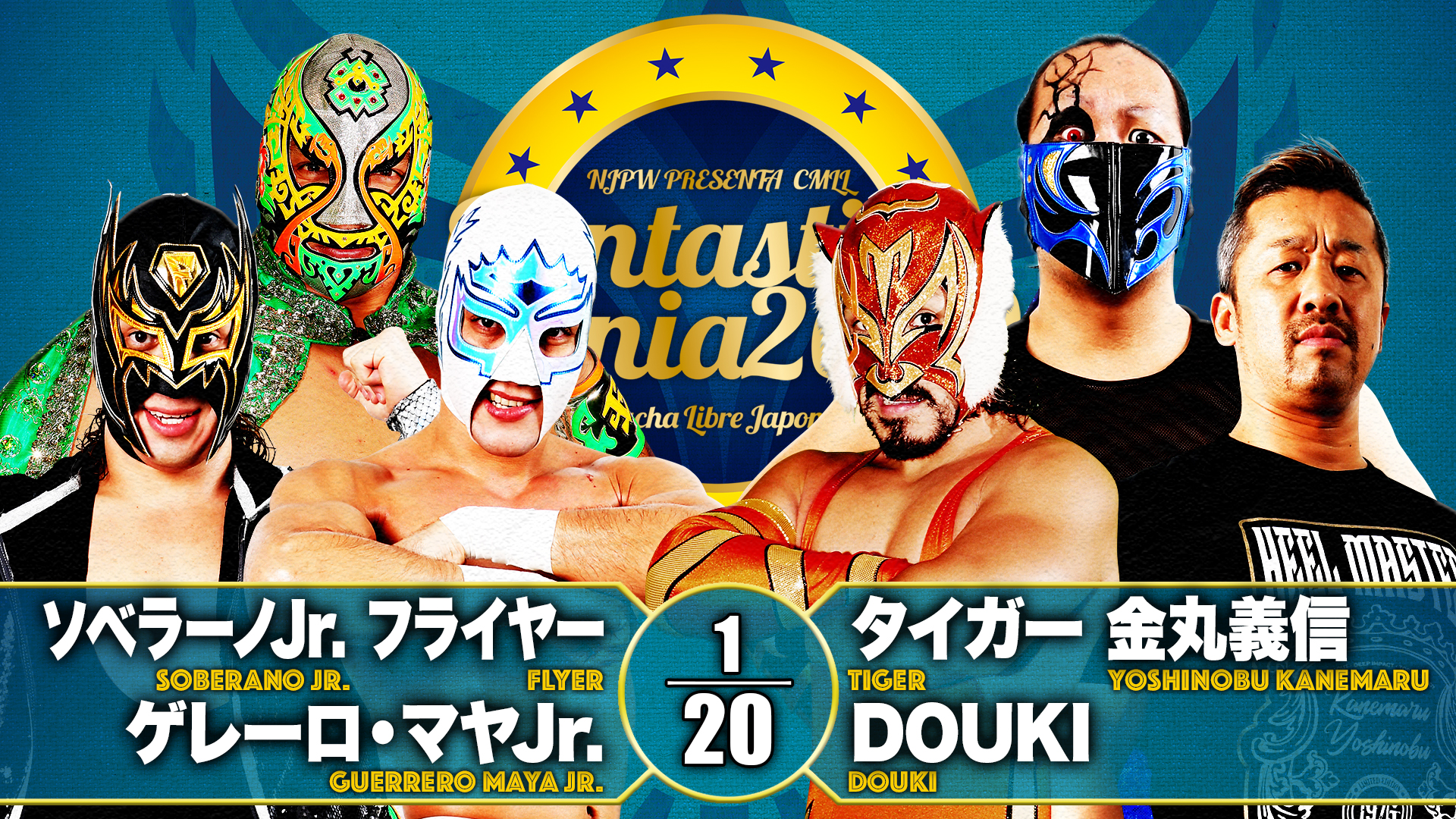 The second match of the evening will see DOUKI and Yoshinobu Kanemaru fight alongside Tiger to take on Guerrero Jr., Flyer and Soberano Jr. The tecnico side will look to unleash some spectacular high flying offense, but need to get past some of the shadiest rudo tactics to do so. Meanwhile, as Tiger and his uncle Negro Casas fly the CMLL flag high, will he get along with DOUKI, who shunned mainstream lucha libre to fight in the streets of Mexico instead? 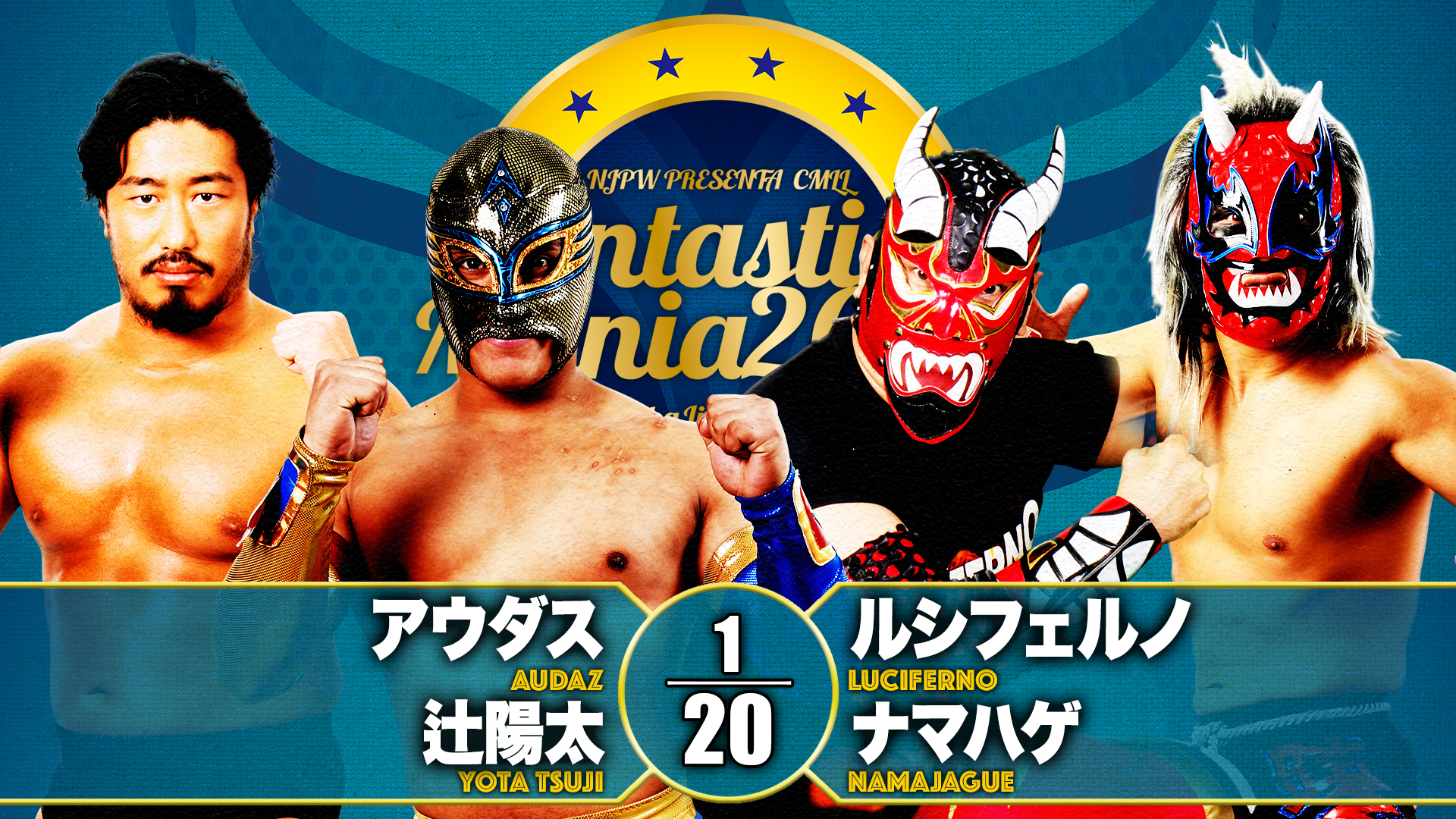 In the opening match of the evening, Yota Tsuji joins the Korakuen crew to team with Audaz against Namajague and Luciferno. Tsuji has been public about wanting to head to Mexico on excursion one day; already having made good on his promise of opening proceedings in the Tokyo Dome at Wrestle Kingdom, can the big former quarterback show his lucha stylings in the opening bout?