Tetsuya Naito speaks up about facing  KENTA in Osaka February 9 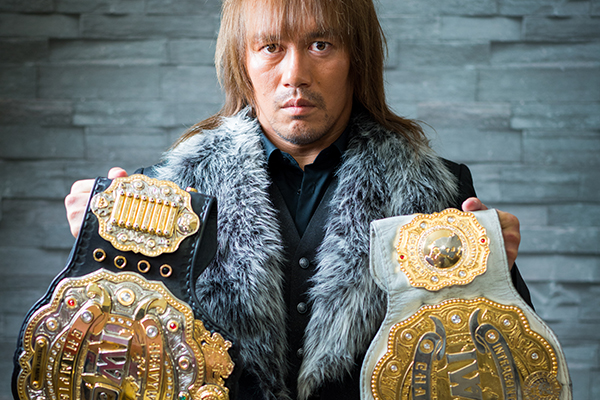 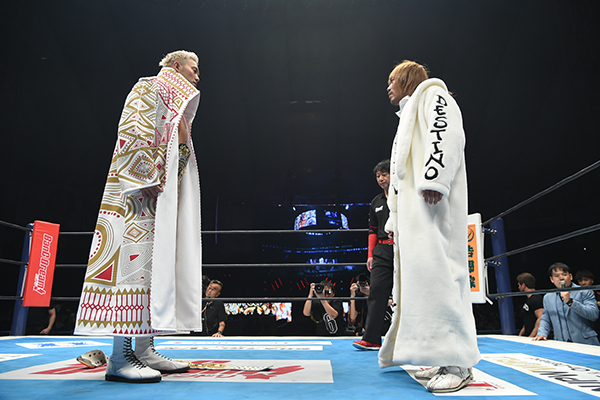 –We spoke last time about your confidence going into the main event match with Kazuchika Okada on January 5. Both of you wore white to the ring that night.

Naito: Right. I wore black on night one, but I’d made up my mind a long time beforehand to wear white if I got into the main event January 5. Even now, I’m not sure I understand what value the Intercontinental Championship holds, but the truth is that that’s the title Tetsuya Naito the wrestler has been most associated with. So I made up my mind to fully represent the title and wear its colours to the ring opposite Okada.

–There was quite a bit of that talk.

Naito: When Ibushi won it from me, fans were saying ‘maybe Naito will move “up” to the heavyweight belt now?’ and when I challenged Ibushi, it was the same thing again ‘ah, he’s gone “back” to the Intercontinental’. I wanted to show that no, I can hold one and go for the other.

I meant what I said in the ring from the bottom of my heart, so yeah, I’m glad Okada reacted how he did. 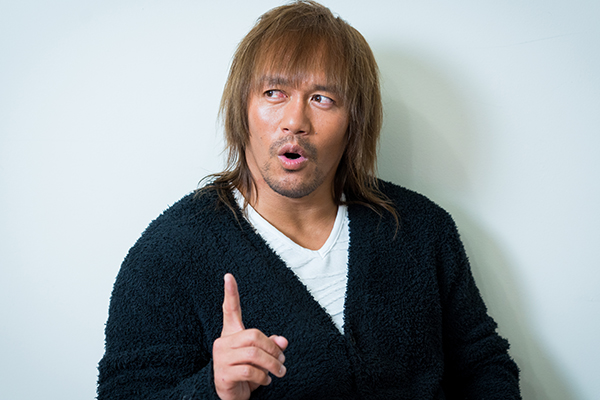 –To take things back somewhat, when Shinsuke Nakamura was IWGP Intercontinental Champion, Okada was the Heavyweight Champion, so that’s where this tacit understanding of having two separate sets of contenders comes from.

–Then in 2014, the famous fan vote that saw the Intercontinental Championship match between Nakamura and Tanahashi headline over yourself and Okada for the Heavyweight Championship. It really felt like a true flip of the script this time.

Naito: Sure. There was always this distinction, of if you were fighting for the Intercontinental title, you couldn’t go for the heavyweight and vice versa. So, to get rid of that misconception, I’ll make history, win both titles at the same time. Show you something you’ve never seen before.

–You didn’t see him hold his fist up?

Naito: I wasn’t looking at the screens. I heard a pop and knew he’d done something but didn’t know what. It wasn’t until I got back and saw it on NJPW World that I knew. Honestly, I meant what I said in the ring from the bottom of my heart. So I’m glad he reacted like he did. But we’ve faced each other three times in the Tokyo Dome now, and each time I’ve been the challenger. Next time I want to be the champion. Have him wait in the ring for me for a change.

It took balls, for a guy who lost the NEVER Championship to just jump in like that.

–So you finally climbed to the top of that mountain, and then…

–You should have had your moment and all the attention coming out of winning the Double Gold Dash, but here comes KENTA.

Naito: Hmm. But you have to give him credit for turning the focus to himself. I said this at the press conference, but as a wrestler, I have to respect what he was able to do, completely wrecking the ending to that weekend. Look, there were probably a ton of guys in the back who were cursing me out behind my back after I won. Plenty of people who would want to do what KENTA did, but he was the one that ran out and did it. Esepcially after he lost the NEVER Championship, just jumping me like that took a lot of balls.

–There were so many angry LIJ fans who felt like they lost their big moment to chant along with you that night.

Naito: I get who they feel, I do. For me, as a wrestler, I can just say ‘ah, OK, I’ll get my moment next year instead’. But to the fans in that building that night, they might not know if they can come next year. I’ve spoken before about the importance of now, of showing who I am right at this moment. To the fans who understand that, what KENTA did was…

Naito: Right. But in wrestling it’s all or nothing. Indifference is the worst reaction that can be; he might have been booed by over 30,000 people, but KENTA made that happen. He did get those fans in chorus, against him.

Naito: I get how he might feel that way. He’s certainly using the benefit of all that worldly experience, heh.

Hiromu said a lot of things… I ignored him though. 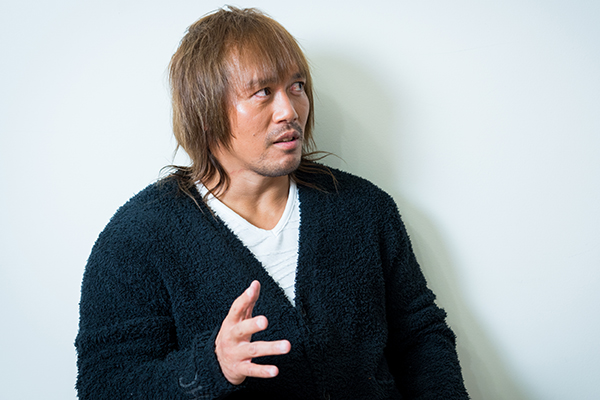 –So you have mixed emotions about KENTA.

Naito: Right, the professional wrestler Tetsuya Naito can appreciate it all, but the kid in me who watched as a fan all those years ago is furious.

–And now you meet in the main event in Osaka Jo Hall. When it comes to main events in Osaka…

Naito: I don’t have the best record.

–So you can perhaps have your big ‘De Ja Pon!’ chant in Osaka February 9.

Naito: Right. And since Hiromu came back, and LIJ became a six man unit, we haven’t all bumped fists in the ring yet. No De Ja Pon! and no fist bumps.

–On January 5 you started your address alone.

Naito: Yeah. Actually we talked about this, after SANADA lost (to ZSJ) that night. We decided not to do the group thing. If I was SANADA to be honest, I wouldn’t want to come out after I’d lost. To change the subject a little bit, at the Dome, you’re in a different room, standing by for your entrance two matches before you go out.

–It’s a long way from the locker rooms to the curtain, so you have to be there a good deal in advance.

Naito: So during that time you’re waiting in a room by yourself. It’s really lonely. And if you forget your phone or something like that, it’s too late to go back. I hate that, so on the fifth, I brought Hiromu (Takahashi) with me, since he’d finished his match.

–To keep you company?

Naito: Yeah. But he’d finished what he’d had to do, so he was just chatting away. He said a bunch of things, but I was ignoring him. ‘I’m nervous here! I’m trying to concentrate!’ Like that. But having him there helped me calm down a little.

Naito: (laughs) But seriously. When KENTA laid me out, why didn’t he come to help?

–Come to think of it, it was BUSHI who came out to help you.

Naito: Where was everyone else I wonder?

–Not to say it’s any relation to this, but a lot of people have suggested EVIL and SANADA might move on from LIJ at some point soon.

Naito: Hm. Here’s the thing though. I won both belts, and I won in the main event at the Tokyo Dome. That’s motivation to those two, right? They aren’t going to be standing ready to come congratulate me. I don’t want LIJ to be like that anyway.

–I would think everyone would be fired up. Shingo Takagi especially.

Naito: He wasn’t around to help out either, huh.

–Didn’t they say anything to you when you got to the back?

Naito: Nope. In fact, when I got to the back, everyone started packing their bags and leaving. I was on my own pretty quick.

Maybe the Stardust Press was my little message to Liger 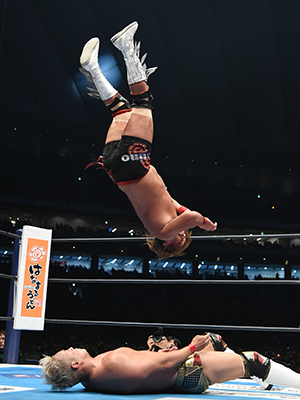 –Speaking of Hiromu, he had a huge weekend, between becoming Junior Heavyweight Champion and beating Jyushin Thunder Liger in his retirement match.

Naito: Before we get onto Hiromu, I do want to bring this up real fast: earlier (in part one) we talked about the Stardust Press. It was significant that I could hit that move on the day Liger retired. Liger did invent the move, after all, so I kind of owe a lot to him.

–The Stardust Genius name you used to use…

Naito: Was because I borrowed his move. I didn’t go on record about Liger’s retirement beforehand, but that maybe that Stardust Press could be my little message to Liger. I don’t know if he saw the match, or if he thought anything about the move if he saw it, but I think that suffices as my little nod to him, perhaps.

If all goes well, maybe the Anniversary main event…?

–Getting back to Hiromu, after New Year Dash!! he suggested he might be looking for double gold of his own, and try to capture the IWGP Junior Tag Team Championships.

Naito: Oh really? Well, maybe that’s a possibility, but I know what else could be. If he and I both remain champions and all goes well, maybe by the time of the Anniversary event…

–The last few years we’ve had champion versus champion main events at the Anniversary card.

Naito: And he’s made some interesting comments about LIJ. If we’re both the champions, there’s a good chance of it happening.

–Of course, you’d both have to clear some tall hurdles in Osaka February 9.

Naito: He’s definitely got a big match against Ryu Lee. But I can maybe see that match as a far off possibility, after KENTA.

–It would be a dream match, for sure. And maybe this might be a bit untoward to bring up, but if he were to beat the double IWGP Champion…

Naito: Heh. Do you know what his dream is?

Naito: Absolutely. I mean, I haven’t faced Hiromu once, not even in a tag match.

–But then at the same time, EVIL and SANADA are having a fire lit under them.

Naito: Oh, yeah; because me and Hiromu are lighting the fire. That’s what we have going on here. In 2020, already, I’ve won double gold in the main event of the Tokyo Dome, and Hiromu’s come back, won the belt, beaten Liger, and has all the charisma in the world. That gets you thinking about what might happen within LIJ as the year goes on.

–When KENTA attacked you, a lot of people were wondering what the other wrestlers were thinking. Imagine if it was an LIJ member hitting the ring.

Naito: I said this after New Year Dash!! Words and actions. That’s how you express what you’re thinking. KENTA did that perfectly. On January 5 & 6, did anybody else say anything about the belts?

Naito: He was the one who asserted himself. Yes he lost in the Dome, but nobody else stepped up like he did. Nobody else realised I was at my hottest. He saw the moment and took it. That’s the ‘worldly experience’ he has.

–You like talking about his ‘worldly experience’ a lot.