The week that was in NJPW World history (February 1-7)

As we count down to New Beginning in Osaka on February 9, our weekly look through the NJPW World archives uncovers some new starts in years past, and history being made, as we also count down to the end of a legend’s career. 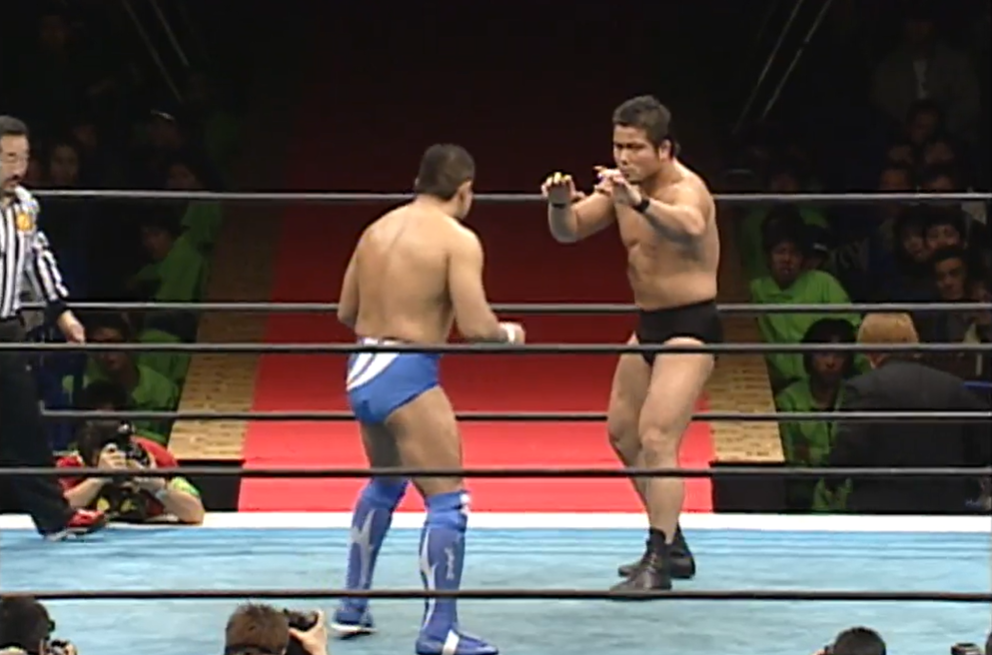 While the New Beginning name wasn’t around in 2002, the idea of bringing hot matches to the frigid Hokkaido winter was. A series of events in Sapporo has long been winter tradition with 2002 being particularly contentious. In January, after injuries sustained in an MMA fight, Kazuyuki Fujita vacated the IWGP heavyweight Championship. A tournament was held over the February tour to find the next champion, with the first round taking place in Sapporo.

Opportunity awaited one of Masahiro Chono, Giant Silva, Rick Steiner, Tadao Yasuda, Yuji Nagata, Manabu Nakanishi and Kensuke Sasaki, not just to lift the IWGP gold, but also to carry New Japan Pro-Wrestling further in the new millennium. The end of January saw seismic shifts within NJPW after Keiji Muto and Satoshi Kojima left the company to head to the rival All Japan Pro-Wrestling. To the third generation loyalists and strong personal friends Nakanishi and Nagata, there was much to prove in the first round matchup. Personal pride too would play a part; it was seven years earlier that Nakanishi defeated Nagata in the Young Lion Cup, and Blue Justice sought revenge against the giant country boy. 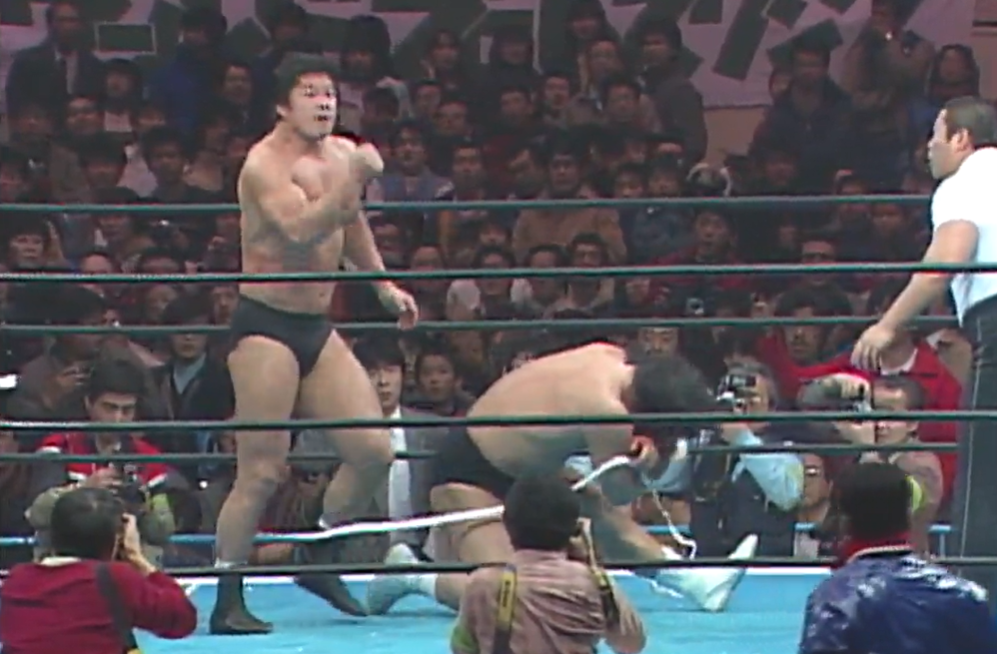 February 2002 in Sapporo was contentious. February 1984 was near riot inducing. Riki Choshu and Tatsumi Fujinami had been rivals since 1982, their feud not just breaking down barriers in setting the standard for all Japanese main event level matches, but also setting new standards in viciousness. Choshu’s hate for Fujinami came from a deep seated jealousy and a chip on his shoulder toward all of NJPW, one which led him to create one of NJPW’s first anti-authoritarian factions, Ishingun.

Ishingun versus the core NJPW loyalists was a narrative through the early 1980s, with the likes of Tatsumi Fujinami and Yoshiaki Fujiwara remaining true blue New Japan athletes. At the top of that interfactional feud was Choshu and Fujinami. Seven times through 1983, the two met in singles action, and Fujinami could never get a pinfall edge over Choshu, with many of their matches ending in disqualification and double count outs.

The Dragon was hoping for a definitive win, and hoping for one in Sapporo. As Fujinami awaited Riki Choshu in ring however, his opponent was late making his entrance, before emerging covered in blood. Of all people, it was Fujiwara who had attacked Choshu, as tempers toward Ishingun boiled over. With the match declared a no contest, Hiro Saito and Animal Hamaguchi in Choshu’s corner would insist that Fujinami had put Fujiwara up to the task of assaulting Choshu, while Fujinami himself had his own anger to bear, denied a decisive win over Choshu once more. 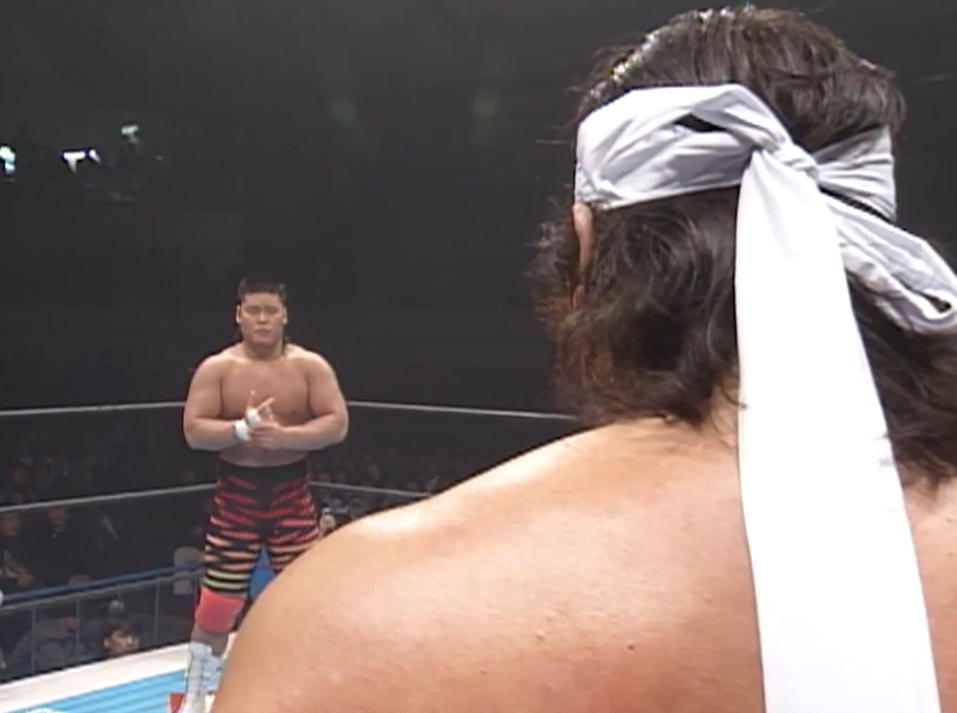 1995’s Sapporo showdown saw a huge opportunity for the 23 year old Hiroyoshi Tenzan to become the youngest IWGP Heavyweight Champion in history. As Hiroyoshi Yamamoto, he had won the 1993 Young Lion Cup before heading to excursion, where he had an exercise in toughness from the skilled wrestlers in the UK and Germany (including Fit Finlay, whose son David he kept company and babysat while his dad wrestled), and where in Canada he learned the Anaconda Vice that would earn him many a submission win.

Tenzan would make his return to the cerulean blue in the Tokyo Dome on January 4 1995 at Battle 7. There he polished off another extremely promising young star in Manabu Nakanishi, before catching the eye of the dominant IWGP Champion Shinya Hashimoto. The King of Destruction was a tall order for anyone to overcome, let alone the young Tenzan, but here was an opportunity to at the very least earn enough respect to establish himself as a top player for years to come, and maybe even make history. 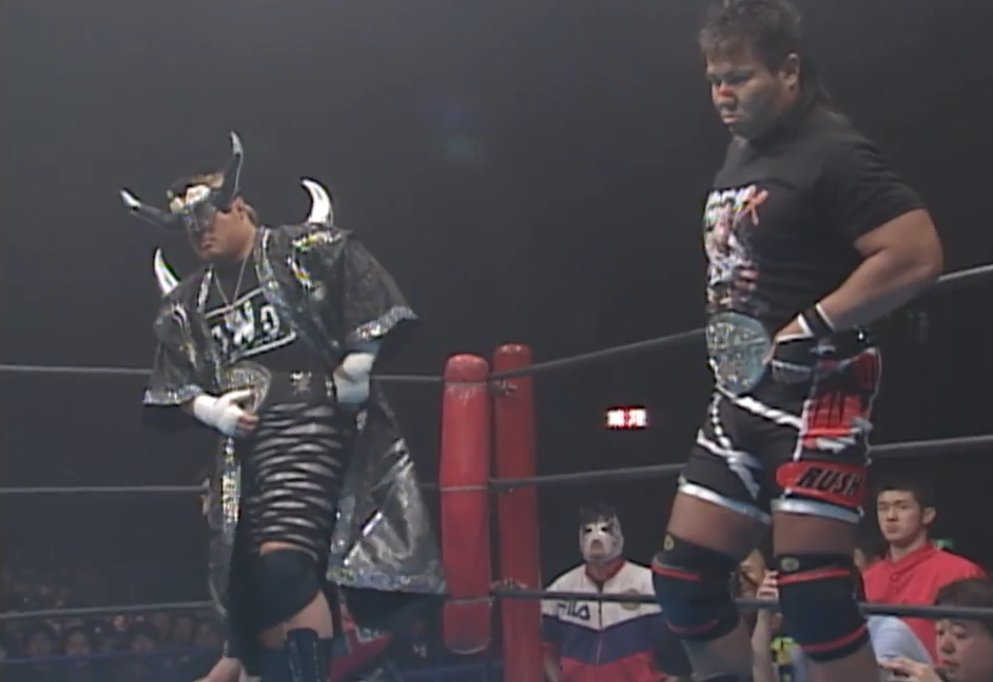 What a difference four years makes. Tenzan started 1995 earning the respect of Shinya Hashimoto and the entire NJPW locker room with a sterling performance in Sappporo, but within the year, he had joined Masahiro Chono’s rebellious Okami Gundan. Then, the black leather clad group morphed into the force that was nWo Japan. Eventually Third Generation Dojo compatriot Satoshi Kojima would join the fold, and the most dominant tag team in NJPW history was formed.

nWo had a reign of terror through 1997 and 1998, but under new leadership in Keiji Muto, the group had earned more respect and appreciation from fans. They still represented a force counter to the straight tried and true NJPW foundation of honour, however, and Yuji Nagata and Manabu Nakanishi, themselves of the same generation who had both returned from excursion to America, were looking to challenge the white and black. 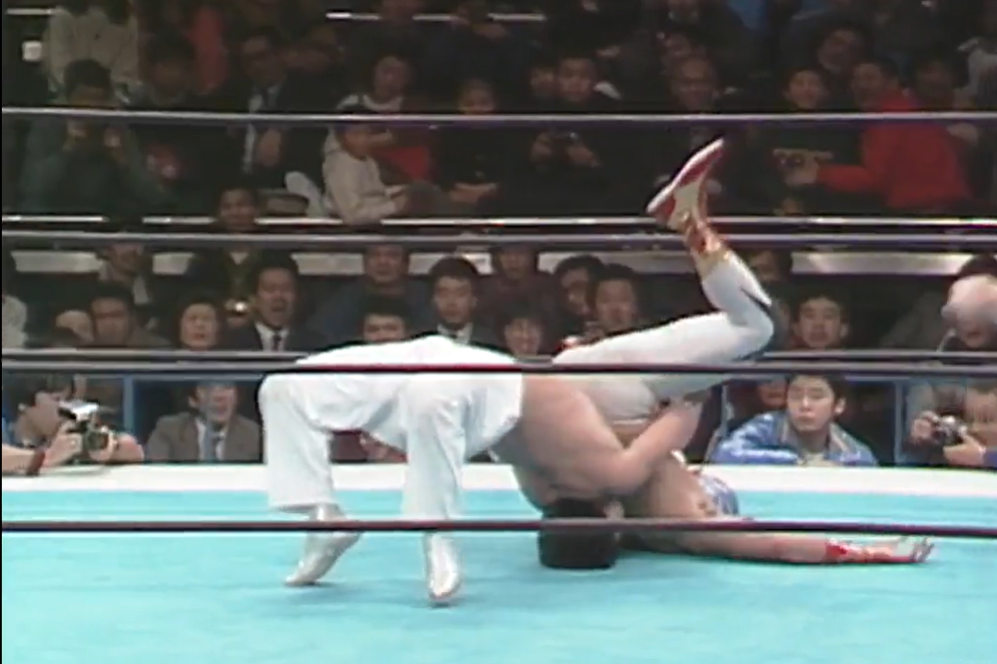 After four matches in the frozen Sapporo climes, we return to Tokyo for our final match this week. In Ryogoku Sumo Hall, history was made in 1986, when the first ever IWGP Junior Heavyweight Champion was crowned.

Junior Heavyweights had been a celebrated part of NJPW cards since the late 1970s, especially so in the wake of Dragon Fever, and Tatsumi Fujinami’s capturing of the WWF’s Junior Heavyweight Championship. That title had by now been dissolved, and one under the IWGP purview would take its place. In a grueling league that ran all the way through New Year Dash (in the 1980s, New Year Dash was a tour through January and February rather than the single big event it is today), seven men participated.

From NJPW, The Cobra, Black Tiger, Shiro Koshinaka, Shunji Kosugi and Keiichi Yamada were joined by luchador Scorpio, and World Class alum Johnny Mantell. It all came down to Koshinaka and the Cobra however, with Sumo Hall the site for this decisive battle.