The Yajin chats to Katsuhiko ‘GK’ Kanazawa before his February 22 retirement. 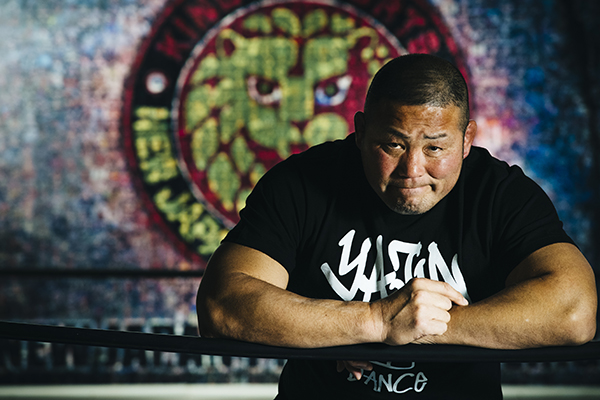 GK: When you announced your decision to retire, you went into detail about the process behind that decision. Now though, as we’re days away, how are you feeling?

Nakanishi: Well, like I said at the time, I haven’t been able to perform how I’d like, and I think it’s time to draw a line in the sand. I still can’t say as I’ve decided what to do after, but once the idea came to me, I figured that’s what I should do right away. End of the day, I think it’s the coolest way to go out for a pro-wrestler, swinging ’til the end.

GK: Did Jyushin Thunder Liger’s retirement contribute to your decision, or was the timing coincidental?

Nakanishi: Nah, talking about Liger will just make me jealous! It’s a different situation, what with my injuries and such.

GK: It’s easy to get into a game of ‘what if’, but June 4, 2011 in KBS Hall, where you did suffer that neck injury; that was a huge turning point for you personally and professionally.

Nakanishi: Well, yeah, but to tell the truth, I hadn’t been taking proper care of myself before I did get hurt. Because I didn’t take responsibility for myself, I put a lot of people through trouble. It was a hard lesson to learn, but an important one.

GK: Managing your weight, you mean?

Nakanishi: Not so much as, I was just lazy. Even if I had a title match suddenly come up, I wouldn’t work hard enough. And then, after those matches, I wasn’t disheartened so much as I just slacked off. I wasn’t taking the business serious enough, and it came back to get me.

GK: You were out of action for a year and four months. Were you determined to get back in the ring?

Nakanishi: I think all the doctors thought i was obsessed.

Nakanishi: They carried me out in an ambulance, and I was laid up in a hospital bed for just a little while before I started saying ‘I’ve got a match coming up soon’. The doctors were all ‘You might never walk again! Maybe face reality a little here!’ For me, it wasn’t so much ignoring reality as trying to stay positive. Like ‘this sucks, but it’ll get better’. I don’t even know where that positivity came from!

GK: But it was that inner strength that brought you back to the ring.

Nakanishi: Well, I got a lot of good advice from a lot of people who came all the way out to my hospital in the sticks. I was really grateful for that. That’s what got me from maybe never living a normal life to making a recovery. Just being able to move around, the doctors were telling me I did good, but I was telling them ‘no, I want to make it back to the ring’. They looked at me as if I had three heads!

NJPW is the best in the world. That’s why I joined. Any match they see fit is the best match for me. 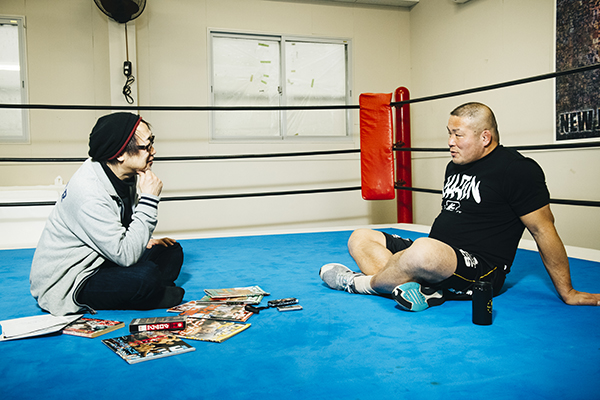 GK: After you came back in Ryogoku on October 8 2012, was the feeling that you couldn’t wrestle how you wanted to wrestle?

Nakanishi: Yeah. I mean it was quite something to get back to the point that I did, but I was still thinking ‘I can still do this!’, then ‘it’s only been six months since I came back, I can still get better!’ then ‘It’s only been a year!’ and on and on. I just never quite got back to where I wanted to be.

GK: And that’s when you felt you wanted to put a punctuation mark on things. It’s definitely sad! In the run up to your retirement match you’ve been wrestling alongside Hiroyoshi Tenzan a lot. You were opposite one another a lot through your Young Lion days, but during the New Beginning tour, with Kojima and Nagata away in the US, you found yourself tagging with him. Did that feel fresh?

Nakanishi: Right, he’s a good base for me.

Nakanishi: No, no! I mean figuratively, he’s doing the grunt work, and I add the fire.

GK: So you’re in the Kojima role? Don’t do anything to insane before you hang up the boots!

GK: February 9 it was the four of you Third Generation members teaming up in Osaka Jo Hall. That match must have meant a lot.

Nakanishi: It did, really. I’m a Kansai boy, and Osaka is right near Kyoto where I was born and raised. I debuted in Osaka, in the Prefectural Gym, so different place, but same town. End of the day, NJPW is the best company in the world. That’s what I thought when I joined. So any match they decide to make for me is the best match for me to be in.

Kendo Kashin was my senpai from Tokon Club… He probably wasn’t happy with me joining! 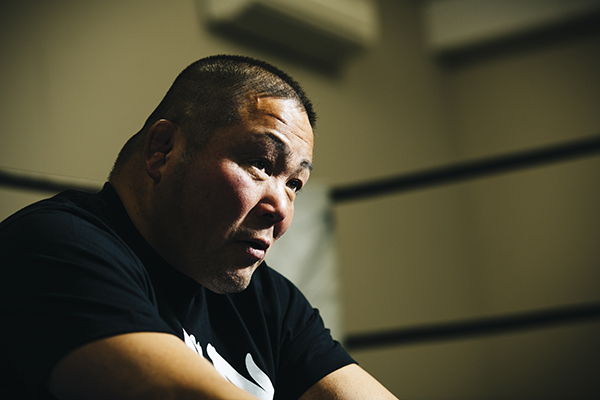 GK: So let’s go back to your past. You said quite famously before that you came into the business to make yourself rosy red rather than soil brown. You got into amateur wrestling as a high school student; were you tired of helping out your parents on the farm at that point?

Nakanishi: No way, I love the farm! Whatever colour you are, and whatever coolur your job makes you at the end of the day, it’s all good. But joining the wrestling club was all so I could be a pro-wrestler. My parents would say they were letting me wrestle at school if I made sure I did the farm work at home, but it was all about being a pro-wrestler for me. Along the way, I figured I’d like to be in the Olympics, but being pro was always the end goal.

GK: You really put all you had into wrestling through college.

Nakanishi: Hm, but it really came together right at the end. It was putting the results in right when it mattered that got me into college, and then the same thing in university, right at the end I was able to impress (Hiroshi, formerly of NJPW, current politician) Hase.

GK:You put an end to the famous ‘golden era’ of (former AJPW and NOAH wrestler) Tamon Honda, who many regard as a god of Japanese amateur wrestling. When was that?

Nakanishi: That was the first year of Heisei, ’89, at the nationals. Nobody could touch him up to that point.

GK: So then you joined the Tokon Club, NJPW’s amateur wrestling organization. Obviously your choice was influenced not just by the Olympic path, but also the connection to New Japan.

Nakanishi: There was a straight line, but also, my senpai who went into NJPW had a connection to America. I wanted to go there for sure. Great food, for one. I wouldn’t have lasted in Russia.

GK: They have American style food in Russia, too! But American sizes are different…

Nakanishi: Haha! But I’m definitely glad I could go to America as an amateur as well as a pro. When I was over there, Tiger Hattori taught me a lot and helped train with me. Made me a heavyweight wrestler.

–Your issues with Kendo Kashin are fairly well known; you two were both in the Tokon Club at the same time, was that ever an issue for you?

Nakanishi: No, he was my senpai in Tokon, with me coming in later, he probably had an issue with me joining if anything. But he got quite the reputation, for being the first product of the Tokon Club to win the nationals.

–What was the biggest lesson you took from the Barcelona Olympics?

Nakanishi: Not to let the pressure get to me (laughs). But it was enough for me, to have made the cut and to have been there. Knowing as well that I could go pro for sure from there, that got me quickly refocused.

I knew when I started training it was gonna take a while to pick up. But then all of a sudden, I was making my debut. 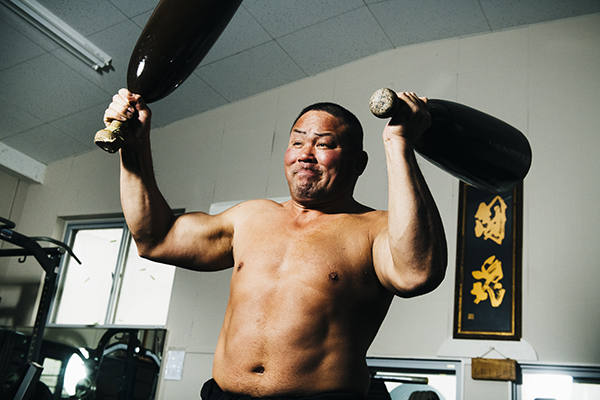 GK: I remember when you had just joined Tokon Club, (former NJPW wrestler and president, current consultant) Seiji Sakaguchi introduced us in Korakuen Hall. You came in this brown suit, I have to shame facedly admit that apparently I said you looked like a freshly picked potato.

GK: I honestly can’t remember; I didn’t say anything so horrid, did I?

Nakanishi: Well, as long as I was an edible potato, that ain’t too bad. I could have been a potato that wa sno good whether baked boiled or fried. If I’m edible that’s OK.

GK: You remember all these little interactions, don’t you?

Nakanishi: Well, it’s all part of the game, isn’t it? I like being straight with people. This is a harsh business, and the reporters aren’t there to be your friends. You give them a vague answer and they’ll find what they want to in what you’ve said and run with that. When people write something bad about you you can either curse them out and get on with it, or you can shrink away and be all traumatized. The people who get on with it are the ones that stay around. It’s all water off a duck’s back to me.

GK: You came back from the Olympics in August ’92 and debuted that October. So you really hadn’t spent much time training at all.

Nakanishi: No, it was all on the job training.

GK: And you debuted right in the SG Tag League. Tatsumi Fujinami was supposed to team with Big Van Vader, but there was a change of plans when Vader injured his knee. You were substituted in last minute. Had they told you of any plans to debut before then?

Nakanishi: No, they were definitely telling me it could be any time and I had to be ready, though. I’m not so good with pressure, and it had taken me ten years to get really good at amateur wrestling. It was really a different world here, and just when I realised that this was going to take a long time to find my feet, I was debuting all a sudden.

GK: You really hadn’t the time to think about it.

Nakanishi: I guess it all worked out. Hase said to me before I debuted ‘your match is coming up. You know what you have to do?’

GK: How did you answer?

GK: Don’t get ideas above your station, just do what you had been doing in training. Was Hase a strict teacher?

Nakanishi: He was strict, but when it came to giving advice he was very plain spoken, easy to understand. Obviously very sports minded. He’d tell you to quit complaining and get on with it, and that’s what I did, heh. 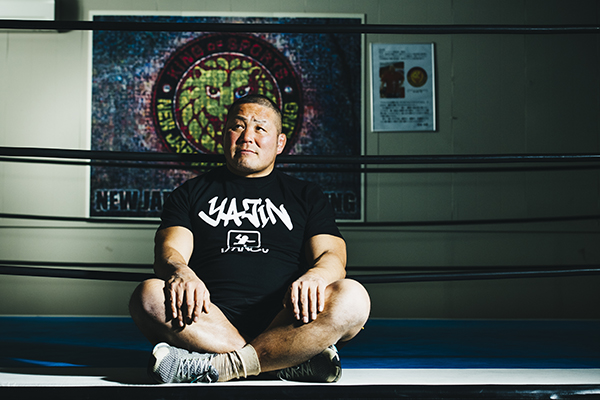 KATSUHIKO ‘GK’ KANAZAWA is a veteran pro wrestling journalist, broadcaster and producer. His career in the industry began with ‘Weekly Fight’ in May 1986, and he would go on to an editor-in-chief position at Weekly Gong. Currently working as a freelancer, his voice is often heard on Samurai TV, TV Asahi and NJPW World.