In the last part of the series, Manabu Nakanishi concludes his discussion with Katsuhiko ‘GK’ Kanazawa.

I tore a muscle right before the G1 I ended up winning. They told me to get it fixed quick, but that’s easier said than done

GK: So let’s bring our discussion into the late 1990s. You had the Three Musketeers- Chono, Hashimoto, Muto- at the top of the cards, and further above them, Riki Choshu and Tatsumi Fujinami still in the scene. In all of that lay the Third Generation. There was a lot of speculation as to just who would emerge from that fold, and then in 1999, you won the G1.

Nakanishi: Guess I did.

GK: One thing I won’t forget is actually, three days before the G1 started, you injured your left calf.

Nakanishi: I did. I actually tore the muscle. It was pretty bad.

GK: I guess we can talk about this, but it was at the end of training, you were playing kickball, is that right?

Nakanishi: Yeah… I normally didn’t get hurt, but it’s in dumb situations like that…

Nakanishi: He was mad at the timing and mad at my clumsiness. He just went ‘get it fixed, quick’, and I did what I could, but it’s easier said than done. It wasn’t getting any better. So I had to change my approach. There was no way I could move at the same rate as some of those guys, so it was more about getting them fired up, getting them to come to me, and taking it from there. That way I could kinda wrestle my way even through the pain.

GK: A huge achievement in the circumstances. To go behind the scenes here, I was working at Weekly Gong at the time, and in the pre-G1 party, I got the OK to use the four of you Third Generation members in a cover photo. The theme was going to be ‘who will break out from the Third Generation’? Then with three days to go before the start, it all changed into ‘is Manabu nakanishi going to make it into the tournament?’

GK: I felt bad for (Satoshi) Kojima. He was all ‘because of Nakanishi, I got bumped off the cover!’

Nakanishi: A real let down!

GK: But in the end, you did the whole G1, without so much as tape on your calf.

Nakanishi: I had it taped up before the matches. But Choshu would say ‘why did you focus on healing it up (if you’re going to tape it anyway)’. It was really tough. I really couldn’t move well. But it changed what I did, changed my style. It was almost, not like a sumo wrestler, but take a stance, posture up and let the other guy come forward. I turned it into something good. And I owe a lot to how big I was.

GK: To do all that, to win in the state you were, that was special.

Nakanishi: Well, I didn’t know what Choshu would do to me if I didn’t win… (laughs)

Nakanishi: Or we’d be on the house show loops and I’d be the only one without a hotel room, haha. Point is, back then it was less a case of thinking about what I should do and doing that, and more just moving out of necessity. I’d be told ‘do it!’ and I had to do it.

GK: Some of all this seems incredibly harsh, but you’re grateful for it?

Nakanishi: I am. Truth is, I’m not the most courageous type, I don’t go against the grain. i’m just grateful to the physique I had, and my folks who raised me to overcome all this. Plus, to have come up with my style because I was in this really bad situation, that’s typical of me.

I had to make sure I wouldn’t embarrass myself when the time came. 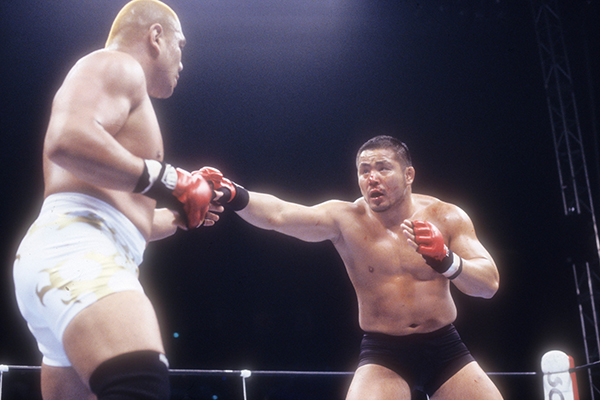 GK: It certainly seemed at that point in time that you were set to be the first of the Third Generation to become IWGP Heavyweight Champion, but it turned out very differently.

GK: We saw Kazuyuki Fujita return from PRIDE to NJPW and win the IWGP title, and Yuji Nagata win, but it seemed like what you were after was always just out of your grasp. Was that frustrating to you?

Nakanishi: Maybe some people might think it strange, but I just thought ‘my time might come one day, so I need to be ready. I need to be in top shape’. So I just trained and trained. It was the same when I was in WCW, and it was the same when I was coming back from my injury. Maybe the company thought they were paying me this big figure to work out all day, but I had to make sure I wouldn’t embarrass myself when the time came.

GK: So you got that philosophy to always be ready from your time in America. Thinking back to that time in the early 2000s, one match that sticks with me is March 9 2003 in Nagoya; you went up against Yuji Nagata for the full 60 minutes in a title match that ended in a draw. Then in May you were put into a match with Fujita under Ultimate Crush MMA rules.

Nakanishi: Again, I got told to do it, and that’s all I could do.

GK: Were you mindful of Nagata’s ventures in MMA before you went into that fight?

Nakanishi: I thought that something good might come out of it, me trying something completely different. I’m not much to speculate or predict what might happen in the future, I just did what I was told, but I figured it might become a chance for me. Fujita was a tough bastard back then, though.

GK: He was regarded as Japan’s top heavyweight fighter at the time.

GK: And he went from facing you to fighting Fedor Emelianenko, who was the world’s best.

Nakanishi: I’m glad I could fight him at his peak. You definitely saw our difference in experience levels in that fight, but all the same. Maybe if we went right in at the start I might have had a chance, but it actually had more of a pro wrestling pace.

GK: He was more experienced, and perhaps more cagey as he thought about Fedor around the corner. You did catch him with a solid punch at one point, and Antonio Inoki was complimenting your posture.

Nakanishi: Posture was maybe all I had. I remember I broke my nose early, and when I felt that I was bleeding I fired up.

GK: You went from that MMA experience to another unique situation in K-1, when you fought TOA on June 29 that year.

Nakanishi: I figured after I tried MMA, K-1 might be interesting too. It was what it was in the end, I got knocked out, but I’m glad I did it.

GK: After that, you went back to a pro wrestling focus, but were you still feeling a bit rudderless?

Nakanishi: I didn’t really know what I should do. I had done these things, and it was a case of me going ‘ look! Look!’. In the end it was what it was. But the whole experience made me realise that making the fans happy is what’s at the core of wrestling, and that settled me a bit.

GK: On May 6 2009, you finally beat Hiroshi Tanahashi to become IWGP Heavyweight Champion. It took a while…

Nakanishi: Right, ten years after I won the G1…

GK: You bloomed late, but you bloomed.

GK: There was so much noise coming from the crowd that night that Korakuen Hall received noise complaints.

GK: It was maybe the biggest pop Korakuen Hall has ever had. Did it matter to you that you were facing your junior in Tanahashi?

Nakanishi: Nah, it was a simple matter of coming in to take the belt, I didn’t need to put up any kind of front, or make it complicated in any way. At any rate, it was all due to a few card changes, because Mistico was scheduled for a match and couldn’t make it.

GK: Because of bird flu concerns, Mistico didn’t make the trip to Japan, and the match between you and Tanahashi was quickly made, and then turned into a title match.

Nakanishi: Right. I think Tanahashi was under a lot of pressure, too. That was, what, the sixth time I’d challenged? The first was with Scott Norton, I remember…

Nakanishi: There’s a little bit to be thankful for the people who doubted me after I fell short those times.

GK: At that point in time, Shinsuke Nakamura said that he didn’t hold Tanahashi to be his rival, but that instead he thought you were great, because you had something he didn’t and couldn’t hope to have. But you always held the IWGP title as your end goal?

Nakanishi: No, not the title so much as the fans going home happy… When I was a little kid, in kindergarten, (NJPW precursor) JWA was still a thing, and then in those early NJPW days… I remember Friday nights at 8PM, falling asleep and rubbing my eyes as I saw these Japanese guys fight the foreign wrestlers. Bloodbaths, they were. And I remember thinking I wanted to be part of that world as I fell asleep. It’s all connected. I think about friends and people I’ve met along the way seeing me in magazines, newspapers, the TV and hoping they think ‘ah, he’s still doing well, working hard’. It’s all connected.

Maybe I was soil brown in the end, all told. 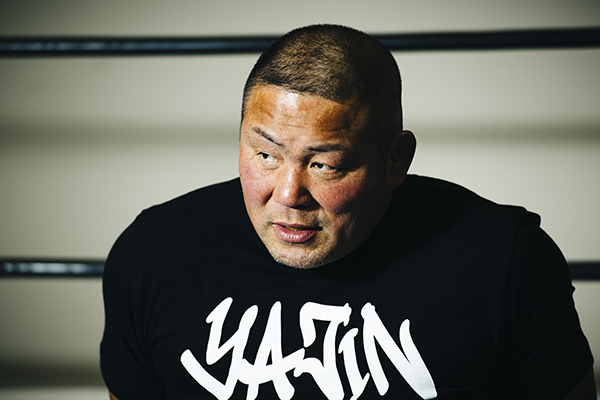 GK: You wanted to come into this business to turn yourself a rose red in the ring rather than a soil brown on the farm. How has that gone for you?

Nakanishi: I’m rosy all right. But in the end, roses come in all kinds of colours, not just red. Mix them all and you get black. The strongest colour, heh.

GK: You did spend most of your career in black tights.

Nakanishi: What colour did I turn out to be? Maybe I was soil brown in the end, all told.

Nakanishi: Hey, farming is a great profession. One day, we all end up back in the soil anyway.

GK: Maybe you can be a brown rose.

Nakanishi: I don’t think they exist.

GK: Well that’s what makes you one in 6.8 billion.

Nakanishi: A rose like that, and you’d get as many moths flocking to me as butterflies and bees. But that’s all good, the cycle of life. I’d breed another rose, something stronger, better, maybe even completely unexpected. Everything is connected, like I said. 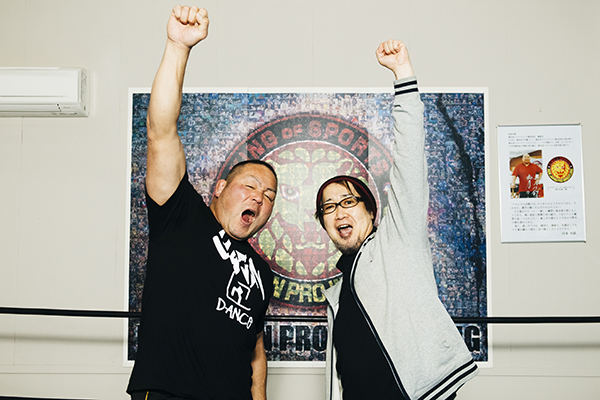 KATSUHIKO ‘GK’ KANEZAWA is a veteran pro wrestling journalist, broadcaster and producer. His career in the industry began with ‘Weekly Fight’ in May 1986, and he would go on to an editor-in-chief position at Weekly Gong. Currently working as a freelancer, his voice is often heard on Samurai TV, TV Asahi and NJPW World.