Kota Ibushi on getting back to business (2/2)

Kota Ibushi goes in depth on the current scene on pause, and what’s to come. 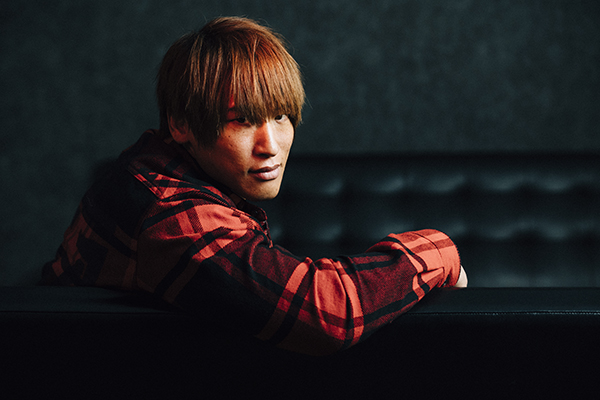 In part two of our interview with Kota Ibushi, we get his thoughts on Naito’s double gold win, his own gold earned with Tanahashi and much more!

How could you think Naito’s anything other than a sneaky bastard? 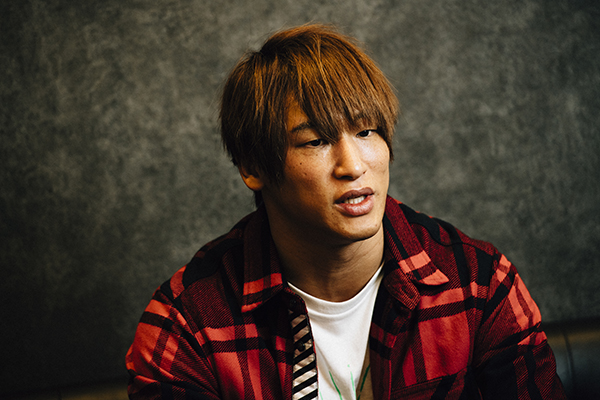 –So Tetsuya Naito ended up winning the Double Gold Dash, and left Wrestle Kingdom 14 with both championships.

Ibushi: Of all four of us in that situation, he was the only one who didn’t put anything on the line. But he was the one who ended up winning it all.

–You had the G1 briefcase, Okada and White were the IWGP Heavyweight and Intercontinental Champions, but Naito came in with nothing and left with everything.

Ibushi: After he won, how could you think Naito was anything other than a sneaky bastard?

–Wow, a sneaky bastard! But in the end it was KENTA’s attack that was the lasting image after the fifth.

Ibushi: After he’d lost his own title earlier in the night. Watching that just made me go ‘wow, you can challenge that easily?’ 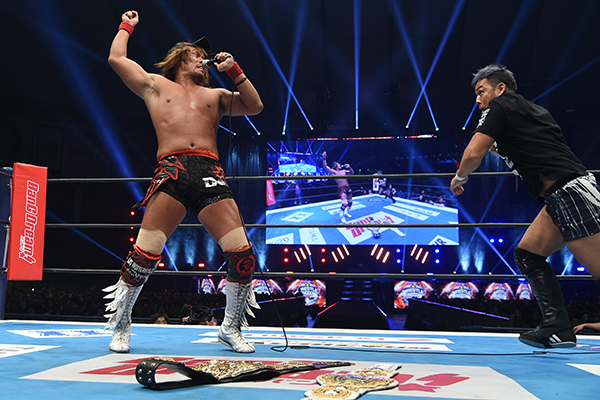 Ibushi: Don’t lump me in with Taichi! But that’s how I felt. Look, I almost hit rock bottom last year. Was injured in the first G1 match and was at my absolute physical limit before I came back and won the tournament, right?

Ibushi: And because of that, I was in the main events almost every night on the road until the Dome. Now, I was the one to propose being in both main events. I have to take responsibility for that. But you have to say that after all was said and done, the one left hurting the most after Wrestle Kingdom was me.

–I understand how you feel.

Ibushi: Now, I know Naito was the first person to suggest being a double champion. But he wasn’t bringing anything to the table. That just made me think ‘nahh’.

–Be that as it may, Naito did beat KENTA on February 9 in Osaka to retain the double championships. What are your thoughts on the title situation now?

Ibushi: Right now? Hmm. I had said that I wanted to broaden wrestling with the double titles, but I think Naito has completely different reasons. For me though, I want to create something new in the tag division.

–Congratulations to you and Tanahashi for beating G.o.D on February 21 and becoming IWGP Tag Team Champions by the way. That was a big moment for you?

Ibushi: It was. But I wouldn’t say that’s specifically because it was with Tanahashi per se. I think I’d feel just as happy to be champion with another partner. There’s something greater than that to me specifically. 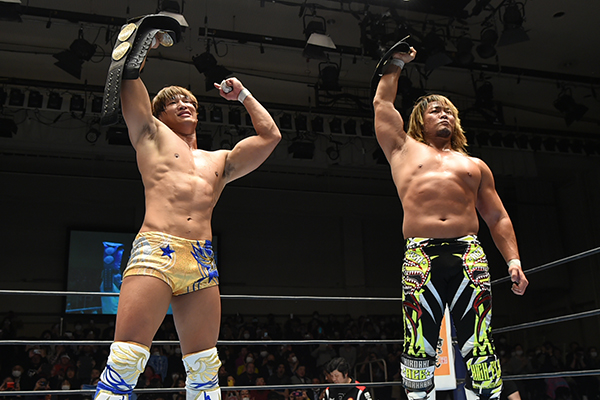 Ibushi: Pro-wrestling is the only place where you see tag teams. I suppose the closest thing to it is doubles in tennis, but that would be like both team members in the ring at once.

Ibushi: It opens up unique situations. Like double teams, two on one scenarios, that only happens in pro-wrestling. I’d been very focused on singles matches for so long, but tags is a very real way that I can broaden the scope of what wrestling is.

–You feel like tag teams are wrestling’s best kept secret.

Ibushi: I think most NJPW wrestlers are so fixated on singles. That’s a shame. I want to change that.

What’s wrong with having the tag titles headline at the Tokyo Dome? 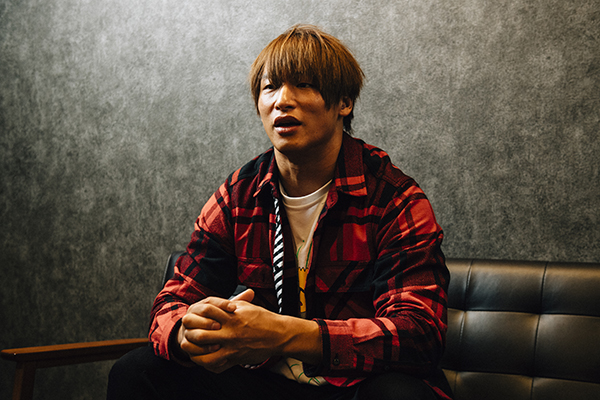 –Right after the two of you won the IWGP Tag Team Championships in Korakuen Hall, you were attacked from behind by Dangerous Tekkers. Then in Okinawa on February 26, EVIL commented after his match that Ibushi and Tanahashi versus EVIL and SANADA would be a thing to see. The tag division is heating up.

Ibushi: You know, when I started teaming with Tanahashi he said ‘stop with this ‘god’ stuff. We have to be equals if we want to make this work.

–You’re on even footing with the Ace now. So do you just call him ‘Tanahashi’? No ‘Tanahashi-san’? 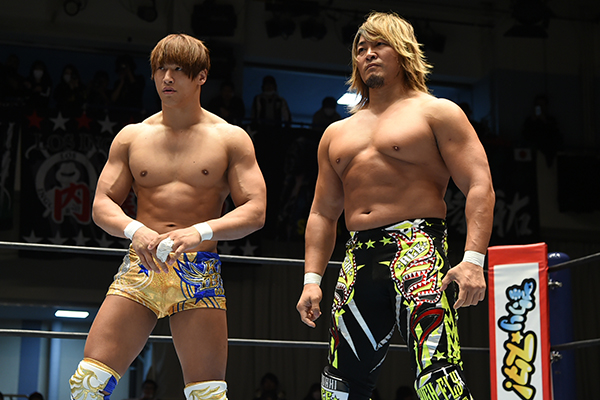 Ibushi: Oh, not that far; he’s still my senpai! Maybe in the heat of the moment in a match I might yell ‘Come on, Tanahashi!’, and not ‘Tanahashi, sir!’ (laughs)

–It’ll be interesting to see this relationship develop.

Ibushi: Oh, I think that’s definitely true. We’re relatively new as a team, and don’t have much of that synergy developed yet. That actually opens up more possibilities, I think.

–When people think of Kota Ibushi in a tag team, they think of you and Kenny Omega in the Golden☆Lovers, but this seems like it’ll be very different.

Ibushi: I want it to be different, and I think it will be. Just consider the level both of us are at: Tanahashi’s said we can hold these belts forever and I agree with him.

–It’s almost always been the case that singles titles have been the focus in NJPW, but with you at the helm, we could see the IWGP Tag Team Championships headline major events.

Ibushi: What’s wrong with having the tag titles headline at the Tokyo Dome? Maybe a lot of fans don’t see the titles that way, but I want to elevate them to the point where it wouldn’t be out of the ordinary.

Ibushi: I want to get some of those fans mad. Get them complaining ‘The IWGP Heavyweight title should be the main event no matter what!’. Then that’s when I take that title too. I’m greedy that way (laughs). 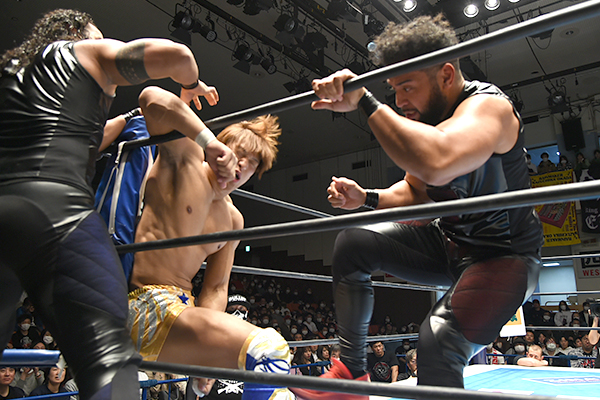 –So are there any teams that you particularly want to face?

Ibushi: I hadn’t really had the chance to tangle with them much before. I knew Tama Tonga was good, but Tanga Loa really took me by surprise.

–You saw his potential as a wrestler for the first time?

Ibushi: His power is amazing, and he’s got a great ring sense to him. I’m not saying I want Golden☆Ace vs Guerrillas of Destiny all year, but I’d like to face them one or two more times at least. What other teams are there?

–Well, obviously Dangerous Tekkers, Zack Sabre Junior & Taichi seem to be putting themselves to the front of the line of challengers, but it’d be their first challnge.

Ibushi: Teams like them, pairs not committed to tagging, are probably the reason the tag division got to be in the position it’s in. If they’re coming for us, I’d be just as interested in seeing Kazuchika Okada finding the right partner and coming for us. When you look at the 1990s in NJPW, there’d be more fixed tag teams.

–Guys like the Steiners, or the Hellraisers (Hawk Warrior and Kensuke Sasaki as Power Warrior).

Ibushi: Yeah, or the Jurassic Powers, Hercules Hernandez and Scott Norton. Or Hiroshi Hase and Keiji Muto. I want to relight that fire again, make the tag division a draw, not just the singles wrestlers.

Me and Shingo? There’d be fireworks 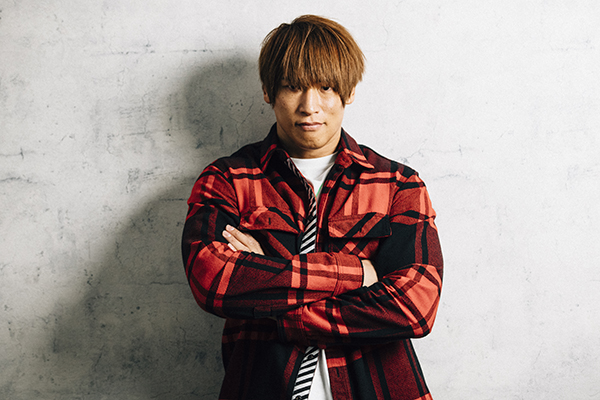 –On February 26 in Okinawa, Shingo Takagi mentioned you backstage as a potential New Japan Cup opponent. Your thoughts on Shingo?

–You’re the same age as well. Do you see him differently to how you see Naito, for instance?

Ibushi: Oh, completely different! The thing about Naito, I’m not sure how he’d take this, but he’s almost like a flower, in a way.

Ibushi: He needs the water of attention to survive, I think. Sometimes I think I can see him withering a bit, but give him just a bit of that water and he surges right back. Well, he and I might have strayed apart a little, but I’ll be ready with that watering can some day. But yeah, Shingo is different.

Ibushi: He’s straight forward and he goes all out. I think there’d be fireworks.

Ibushi: He and Will Ospreay last year, that was amazing. I think if we got in there together, it’d be a different kind of match, but just as good.