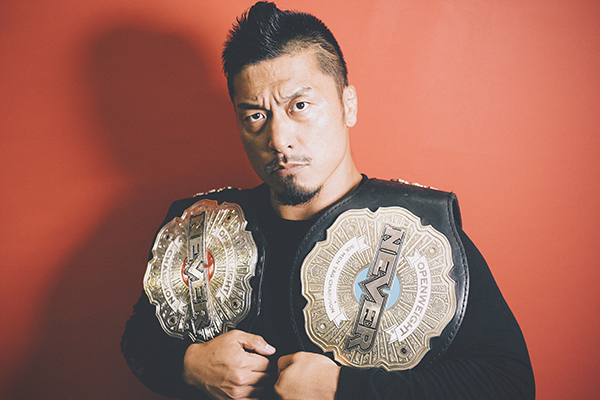 In Fans Bring the Questions Match, the NJPW fans get the chance to put questions to the world’s top wrestlers. This time, it’s Shingo Takagi who steps into the hotseat to face the fans!

–Before we get to the fan’s questions here, first of all, your thoughts on the spate of cancellations in the wake of COVID-19?

Takagi: Well, I’d be lying if I said I didn’t feel uncertainty and concern, but my motto is ‘the eternal battlefield’. I never stop fighting, and i’m always ready. But this isn’t the time to be risking people’s lives unnecessarily. I want to build up all this tension and frustration and then really let everything fly in the ring when the time is right.

‘What do you think is your best match in NJPW so far?’

Takagi: Definitely June 5 2019, the Best of the Super Juniors match with Will Ospreay sticks with me. I’d been undefeated in eight months. Certainly the result wasn’t what I had envisaged, but it changed my viewpoint to become an openweight wrestler and then a true heavyweight.

–Did you have a vision in mind for what you would do had you won?

Takagi: Yeah. I had the idea to at one point be able to say ‘hey, you can clearly see, I have no competition left in the junior heavyweight division, so I’m going heavyweight’. But then I lost, so that screwed that up, and I went into the G1 as an openweight. That said, this match; I really put my absolute all into wrestling Ospreay and still ended up losing. It was just unreal.

–What about it in particular stands out to you?

Takagi: It was the main event in Ryogoku, and being seen all over the world on NJPW World, so it really was a huge stage, a huge platform. From the very first move to the finish though, I just saw first hand the potential and the ability of Will Ospreay.

Including your time as a fan, what match has really influenced you as a wrestler?

Takagi: I remember being a school kid and watching Mitsuharu Misawa beat Stan Hansen with one elbow.

Takagi: Of course I wanted the Japanese guy to win. It was also a smaller guy being able to beat a giant like Hansen. Like, you can push past physical limits if you try hard enough. That’s the match that really drew me into this world. There’s the cliche of mind over muscle? Misawa was that against Hansen. My career has been muscle over mind though, heheh.

What muscles are you most proud of?

Takagi: It might come as a surprise, but I don’t think my Pumping Bomber arm is my greatest weapon. I actually put most significance on my legs. I don’t like running much, but I never, ever miss leg day. If I want to take down the biggest guy with a Pumping Bomber, there’s no chance of doing that without acceleration, and there’s no acceleration without my legs.

Takagi: So if I hurt my legs, or if my opponent targets them, that’s when I’m in trouble.  That’s not just me either; most of a human’s musculature is in the legs, so if you train your legs hard, it makes it easier to train the rest of your body, too.

–So the secret to that power and acceleration is your leg strength.

Takagi: Yeah. Even outside the gym, I’ll go running a lot, or do cross-fit. Obviously visuals are important and the strength that you can see is important, but the strength you can’t see is in your legs. If I ever slow down when hitting the ropes, that’s when you can think I’m finally in trouble (laughs). 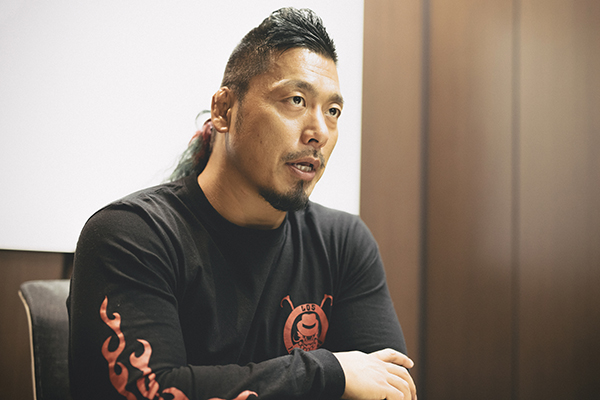 What are the origins of your Pumping Bomber?

Takagi: Lariats are just such an iconic pro-wrestling move. I’m in my 15th year in the business now, but I always knew I wanted to use lariats when I became a professional wrestler. Even when I was in judo club in high school we’d trade lariats during breaks in training. Messing about and wrestling kinda goes hand in hand with judo club, hah.

–So you had it in the works before you even started wrestling!

Takagi: Lariats just scream pro-wrestling, don’t you think? Even though it isn’t something you’d think of trainee wrestlers using, I thought that if I started using it, I could gradually work on it and develop it. I was working on that lariat from a real early stage and it gradually got to the point where I could use it as a finish.

–All that work paid off.

Takagi: But I didn’t want it to just be called a lariat. I wanted it to be called *something* lariat or *something* Bomber, after Hulk Hogan’s Ax Bomber. I’m a huge fan of the Arnold Schwarzenegger film, ‘Pumping Iron’. It always gets me fired up for matches and gym sessions. So I took the Pumping from that. When I shoot with the left arm though, you can call that a ‘Dragon Lariat’ or something.

When lots of fans think of you, they think of Made In Japan. Why did you not use that move for your first eight months in NJPW?

Takagi: I wanted to keep that move in my back pocket so to speak, just pull it out when it was absolutely necessary. Thing is, I hit it on Ospreay and still lost. That’s what I mean when I talk about how amazing Ospreay is; he literally got 100% of me and was still able to win.

From ‘Becoming one in a century’

You’re known for innovating a lot of different moves, and there’s lots you’ve yet to use in a New Japan ring. Is that a conscious decision?

Takagi: Well, there are some moves that I’ve thrown away as my career’s gone on, but also, this isn’t Fire Pro Wrestling. I don’t have a fixed moveset every single match; it’s a case of using different offense for different opponents and situations. Sometimes something might only come to me in an instant. Pro-wrestling isn’t a race to see who can use the most moves, it’s about using the right things when, and I’m very mindful of that.

–But because you have that big arsenal to draw from, there is a lot of anticipation from fans, that they never know when you might pull something out.

Takagi: Hm. Before the events were cancelled, when I defended the NEVER title in Korakuen against Tomohiro Ishii; that was this really hard hitting match, really what you could call Strong Style.

–Korakuen was so loud for that match.

Takagi: Then after that, the NEVER 6-Man title match, it was a completely different deal with (Ryusuke) Taguchi, (Toru) Yano and (Colt) Cabana, all the ha ha with the turnbuckles. Then the next day it was Will Ospreay and this high speed action. Different opponents, different styles, different fights every day; I think that’s what makes wrestling fun.

Takagi: So I’ll keep on changing my game depending on my opponent. Sometimes that might mean an old move of mine might naturally appear, or I might even pull out something that nobody’s ever seen before. 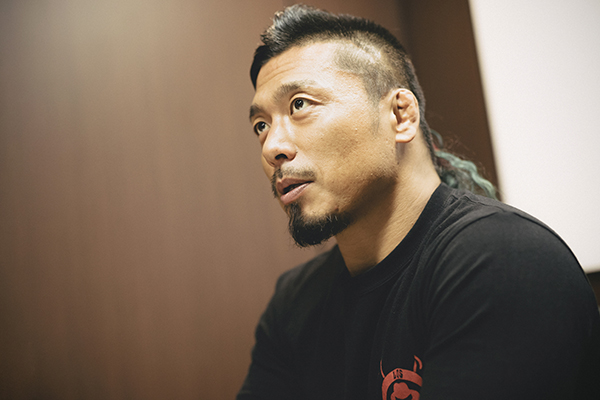 Are you interested in going after the IWGP and Intercontinental Championships?

Takagi: I’d be lying if I said I wasn’t, but I really don’t think there’s any need for disruption within Los Ingobernables De Japon at the moment. LIJ has seven belts right now; the IWGP Intercontinental and Heavyweight, the NEVER Openweight, IWGP Junior Heavy and three NEVER 6-Man Tag belts. I don’t recall another faction ever being able to pull that off. I wrestle for myself and for my team; I have a lot of personal pride, and I want what I want, but there’s no reason to wreck a good thing right now. But yeah, I’m not uninterested.

–You had been entered into the New Japan Cup before it cancelled, and would have been in line for a shot at both titles had you won.

Takagi: I mean, the company said that it would be for the IC and heavy titles, but since I want to elevate the NEVER title, it would make sense if I won to have Naito challenge me. If I beat Naito in a NEVER Openweight Championship match, that would make the power balance around here pretty interesting…

Who’s one wrestler you really want to face one on one?

Takagi: I got asked this same question when I first came to NJPW. I said Kota Ibushi then, and that hasn’t changed. I’ve wrestled Naito, I’ve wrestled Ishimori now. I’m definitely interested in the guys that are the same age as me, and I’m definitely interested in doing it sooner rather than later. I don’t want to wait until we’re in our 40s, after saying ‘we need to do this’ for over a decade. 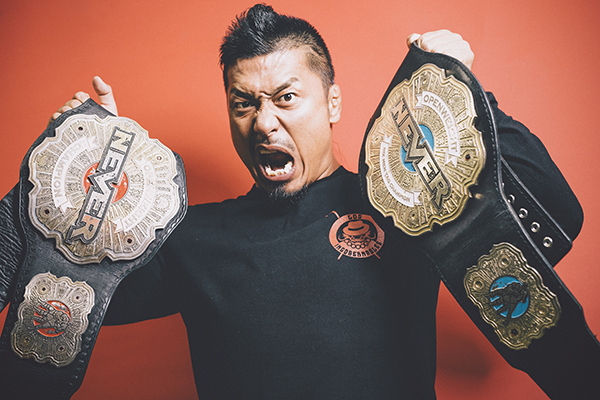