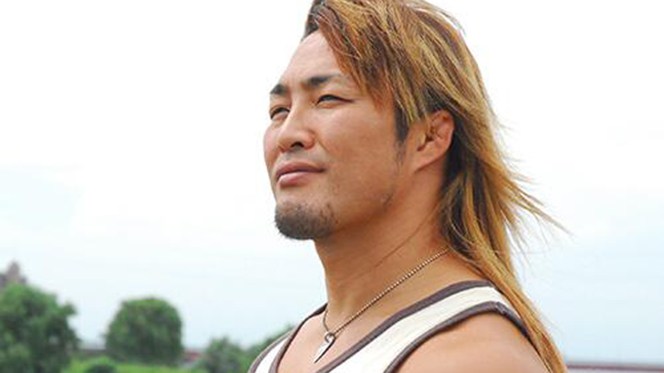 Rightly regarded as one of the best professional wrestlers of all time, Hiroshi Tanahashi’s wrestling career is well documented. But there is still much to know about the Ace’s ascent to the top, and the man behind the master of the century, as we find out with this exclusive series of autobiographical interviews!

–Did you really think of yourself as the big brother?

Tanahashi: No not really. I don’t think I’ve ever been in a big brotherly situation. I’m kind of naive and my parents definitely spoiled me.

–What did your dad do?

Tanahashi: Just your everyday office worker. I think we had the stereotypical Japanese family unit. I lived with my grandparents, my parents, and then us three kids in the house.

–You’re from Ogaki in Gifu prefecture. Is there anything remarkable about where you grew up?

Tanahashi: Gifu isn’t near the sea, but there are a lot of rivers running through there. Our house was right by the river. It was really rustic, these rice fields everywhere. Blessed with nature, I guess you could say. We were always playing in the fields, splashing about in the river.

Tanahashi: I guess I was two or three. Playing in muddy puddles outside. I remember taking all the little bits of gravel out the mud; I like my mud nice and smooth (laughs).

–A mud perfectionist! Were you quite independent as a kid, do you think?

Tanahashi: Yeah, I think so. I mean, I was barely home a lot of the time. I would come home from school and then go straight out to play. I wouldn’t get home until dinner time.

–So a real outdoors type.

Tanahashi: Right. When I was in fifth grade, I joined the local baseball team, but before that, I would be playing outside with friends every day. Five or six of us playing tag, trying to catch crayfish, stuff like that. This is kinda embarrassing but I went back to visit Gifu recently, and my old school friends told me when I was a kindergartner I would constantly be trying to lift up girls’ skirts.

Tanahashi: I guess I saw myself as a player! I wasn’t there, but apparently there was a little school reunion recently, and one poor girl still remembered from over 30 years ago.

–And you remember doing it?

Tanahashi: Sad to say, yes. Me and a couple of friends were three dirty minded kids.

–How about elementary school? What kind of student were you?

Tanahashi: I was the class clown, I guess. I would try and be the center of attention, try and get laughs wherever I could. I was really good at art though; I could draw pretty well. I illustrated the cover of the graduation album.

–So you stood out in class?

–How were you academically?

Tanahashi: Eh, just above average. Kind of a jack of all trades, master of none.

–Any big recollections from school?

Tanahashi: No, not really. I think I’d grown out of lifting up skirts (laughs).

–What did your report cards say?

Tanahashi: He doesn’t settle down, he finds it hard to remember stuff, that kind of thing. I did get in trouble for bothering a girl…

–That’s becoming a theme. Did puberty only escalate that?

Tanahashi: Yeah, I was terrible. I went drinking with some of my old friends from junior high recently, and they reminded me that I was giving the class unofficial sex ed classes (laughs).

–How did you know any of that stuff?

Tanahashi: Oh, you know… One of my friend’s dad had stacks of ‘Playboy’ hidden away, so we’d sneak a look.

–Did you have any celebrity crushes on TV, or anything like that?

Tanahashi: I really liked the actress Satomi Tezuka, I was obssessed with her pin-up books in high school. And (actress/TV personality) Miho Takagi.

–Those are very refined, classy picks for a high schooler!

Tanahashi: I had my type early! I liked slightly older women.