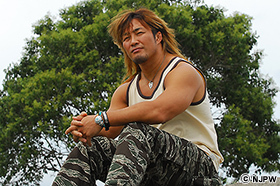 –We’ve gotten this far without talking about pro-wrestling once. So when did you first discover wrestling?

Tanahashi: Hmm, I’d say I started to get really into it in ’92 or ’93, when I was in my junior year at high school. I remember at first my brother would get up late at night and watch matches on TV. I’d start watching with him, and gradually got hooked.

–So this was the era of the Three Musketeers (Shinya Hashimoto, Keiji Muto and Masahiro Chono) in NJPW and the Four Pillars (Mitsuharu Misawa, Kenta Kobashi, Toshiaki Kawada, Akira Taue) in AJPW.

Tanahashi: Right. Kobashi in particular stuck with me; he was still starting out at the time, and wrestling a lot of his matches from underneath. Then in NJPW, the junior heavyweights caught my eye. Wild Pegasus and Eddie Guerrero, Black Tiger, tearing into each other.

–Did you have a favourite wrestler at the time?

Tanahashi: I’ve said it a lot over the years, but Kobashi and Muto really resonated with me. They’re both very orthodox in style, which I liked, and both looked super cool. Real idols to me.

–Did you have a particular image of pro-wrestling before you started wrestling?

Tanahashi: No, not at all. I hadn’t seen it at all, so I had no idea what it was. Come to think of it, a couple of the kids in my class were watching before i started to. I remember them giving me a double suplex in the hallway, and me not having a clue what was going on. (laughs)

–Hahaha! I wonder if they ever think back now, knowing the guy they suplexed in the hallway was one of the greatest IWGP Champions of all time!

Tanahashi: Heheh. But once I started watching wrestling, we would mess about all the time in between classes.

Tanahashi: Yeah. I remember trying to snapmare this guy as soon as the ‘bell’ rang. But I caught my foot in a desk or something and couldn’t get free. I got pushed down and pinned. First job of my life.

–You later got a reputation for a really fast snapmare, but not that time. So once you got into wrestling, that was it?

Tanahashi: Oh, I was all the way in, yeah. I think timing was a big part of that. I used to be really into baseball, but it just seemed I couldn’t get anywhere with it. No matter how hard I practiced I wasn’t getting any better, but just at that moment, here came this completely different, awesome thing into my life. It might sound hokey, but wrestling made life a lot more worth living to me.

–Can you put your finger on one thing in particular that attracted you to the business?

Tanahashi: I think it was this idea of these people managing to overcome any expectations. When I didn’t know much about wrestling, I’d see guys take a big suplex, or a stiff lariat and think right away ‘he’s finished’. But when they kicked out, it would blow me away. It was those guys and that resiliency that appealed, I think.

–What was your favourite match from your years as a fan?

Tanahashi: It would have to be from all Japan, when Kobashi and Steve Williams went 40 minutes plus in Aichi (August 31, 1993). Kobashi lost in the end, but the image of him taking those murderous backdrops from Dr. Death, and pulling himself up on the ropes to stand time after time, that was awesome.

–So did you ever think at that point, in high school, that you wanted to become a wrestler?

Tanahashi: No, not at all! I was 175 cm at the time, and only about 65kg. But my high school baseball coach was big into getting the guys to start weight training. During the off season in winter I would be doing barbell squats and bench presses.

–So you weren’t the biggest, but you were cut?

Tanahashi: Heheh. I had some amazing abs then! At swim class, the girls would go crazy.

–So your romantic adventures evolved after junior high.

Tanahashi: Right, I still had it (laughs). The guys in the rugby club would ask me how I got a body like I did.

Tanahashi: We-ell… In sophomore year, I dated N-san, and then we broke up and I dated the girls’ basketball captain I-san in senior year. N-san was my first kiss though!

Tanahashi: I remember we were going on a date to Nagoya Aquarium, and the whole train ride there I was thinking ‘I’m going to kiss her today!’. It was all I could think about.

Tanahashi: Yeah. But the timing never seemed right. There was never the chance. So on the train ride home, I thought ‘it’s now or never’ and I just randomly went for it.

–Haha! Not much tact.

Tanahashi: Oh man, I was such a dumb kid. I was so fixated on the idea, just an ape. That’s probably why me and N-san didn’t last long (laughs).

–It doesn’t seem like you had much heartache as a teen.

Tanahashi: Well, all the girls were falling at my feet, so…(laughs) just kidding. No, I think from junior high on I got gradually more confident.

–But with that image, and you gradually building those muscles, it seems as if this was the beginning of Hiroshi Tanahashi: professional wrestler.