Ace’s HIGH #4: Portrait of the Ace as a Young Fan 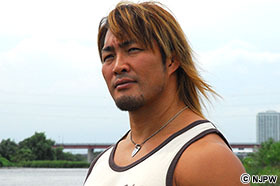 –I’d like for us to explore your fandom a little bit. You started watching wrestling as a high school freshman; did many of your friends watch?

Tanahashi: Oh yeah. A couple of my friends in class were big fans, so when we had culture day at school, we’d come in cosplay.

Tanahashi: No, we just wore costumes. I took a sharpie and wrote KENTA KOBASHI on a white T-shirt, but for some reason I drew a (Masahiro) Chono goatee on my face (laughs).

–A bit all over the place (laughs)

Tanahashi: Yeah. But anyway, we had a little bit of a pro-wrestling fan group.

–What was the first live wrestling you saw?

Tanahashi: Senior year, we went to see All Japan in Gifu. I can’t remember the card too well, but I’m pretty sure there was a six man tag in the main event.

–Is there an event that really sticks out to you from your days as a fan?

Tanahashi: Oh, it has to be my first time in the Tokyo Dome. October 9.

Tanahashi: Yeah. I was a freshman in college in Kyoto. I went with one of my high school friends who was going to school in Nagano. So we both made these huge treks to Tokyo and met there.

–Tokyo Dome was absolutely jam packed for that event. One of the most famous nights in Japanese wrestling history.

Tanahashi: It was buzzing right from the very first match. Obviously, I was a student with not much cash, so I was right in the upper deck at the back. Packed in, but the atmosphere was unreal.

–It was completely sold out.

Tanahashi: And everyone around me was buing the event programs. They’d come with these NJPW and UWFI stickers, and I remember using the NJPW ones on the merch I had.

–So what kind of fan were you? Did you sit and watch the matches really carefully, or were you the type to chant and yell?

Tanahashi: Oh, nothing beats getting loud in my opinion!

–Ah, I didn’t think you were the type! What match from that night really stuck with you?

Tanahashi: Oh, it has to be the main, Nobuhiko Takada vs Keiji Muto. The story of that match was how Muto would deal with Takada’s kicks and submissions. He caught a Takada kick and turned it into a Dragon Screw, then won with the Figure Four. It was like the ultimate victory for professional wrestling, to win with submission with a pro-wrestling move. Just so satisfying to watch. (Watch the match on NJPW World!)

–It only makes sense that should have an impact on you.

Tanahashi: After that, I think I went to every single Tokyo Dome event. Come to think of it, before All Out War, the G1 that year was five nights in Ryogoku, right?

–Yes, indeed. Ric Flair was part of the league that year.

Tanahashi: Yes! That was the year Keiji Muto won and he had that famous promo about exploding into the future.

–He beat Shinya Hashimoto and became the first of only two to eve win the G1 Climax as IWGP Heavyweight Champion. Were you at the final?

Tanahashi: I went to all five days.

Tanahashi: Yeah, I went all five days. On my own, too.

–Five days of tickets can’t have left you much for hotels.

Tanahashi: I didn’t have any plans made for sleeping!

–So what did you do?

Tanahashi: Hmm, I remember one day I was able to stay with a classsmate. Apart from that it was just random. Remember, this was before you could spend all night in an internet cafe; there weren’t many of that kind of place then. I think I wound up going to a 24 hour family restaurant and killing time to the next day.

–That’s how big a fan you were. I’d imagine that you also went to whatever shows were happening in Kyoto as well?

Tanahashi: Oh, for sure, in the Kyoto Municipal Gymnasium. I’d sometimes go to Osaka, too, or Shiga prefecture close by.

–Any memories from those shows?

Tanahashi: I remember they set up a gym attached to the venue in Kyoto.  I was sure there would be wrestlers working out there, so I went with a friend and kept a look out as we were working out. Sure enough, Muto and Masa Saito walked in.

Tanahashi: It was a real chance to see them work out. We got to take a picture as well.

–So in the end, you must have gone to more live events than you can count.

Tanahashi: Oh yeah. All my part time job money went on wrestling. We would go and lead chants, try to make a fun atmosphere in the building.

–A company man from the start!

Tanahashi: You could say that.

–So ‘we’ in this case refers to your days as a student wrestler. We’ll get into that next time!