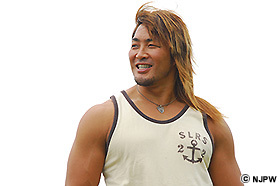 (Editor’s note: In this installment of Ace’s HIGH, Hiroshi Tanahashi discusses his time in Student Pro-Wrestling.

In Japan, Student Pro-Wrestling ‘circles’ are a staple of extra-curricular university clubs, and often involve ‘wrestlers’ imitating popular stars as well as adopting their own personae. Though not recognised by the professional ranks and often maligned, these circles can often bring sizable student crowds to campus events. Once a year, university pro-wrestling circles from across the country convene to present their largest scale event in Korakuen Hall.)

–So today, we’re going to explore your university days. You went to quite a prestigious school, Ritsumei University in the Kansai region. How were your grades in high school?

–Oh, so you didn’t refocus on pro-wrestling right away? You were going to be in the press?

Tanahashi: Right, so I looked into a lot of schools with a good sociology department, looking to study journalism. The law school at Ritsumei seemed to be the best.

–So did you start with Student Pro-Wrestling as soon as you got into university?

Tanahashi: Yes. The wrestling circle had a booth at the orientation fair.

–Did you think you were going to get involved with that scene before you started college?

Tanahashi: No, not at all. I really didn’t know much about the extra curricular scene at Ritsumei. I figured I’d do baseball, and triathlon for some reason.

Tanahashi: Well, I figured it was such a rigorous, demanding sport; it was my kinda deal. So I was weighing up triathlon and baseball, but then I found that pro-wrestling booth.

–As if fate intervened.

Tanahashi: Right. Their booth really stood out; they were banging out wrestler entrance themes and had their members there in full costumes. I saw one of the senpai wearing UWF (Nobuhiko) Takada kickpads, and I wondered whether they were the real deal.

Tanahashi: So, right there I asked the leader ‘so you guys wrestle?’

‘Do you have guys that went on to pro-wrestling?’

–So they had wrestlers who went pro before you?

Tanahashi: Hell, no! He was lying his ass off, but I was dumb enough to be impressed (laughs).

–Hahaha! Judging by our earlier conversations, did you not think about joining any groups to get girls?

Tanahashi: Oh yeah! I was in student pro and the amateur wrestling club for me, and I joined the tennis club for the girls (laughs).

–On brand then (laughs). So what made you join the wrestling club?

Tanahashi: Well, I’d often use the weight room at uni, which was right next to the dojo where the judo and wrestling practice was.

–It was a club rather than a full blown team? There can’t have been many members.

Tanahashi: Only three or four; most of them had moved up from Ritsumei’s high school team. Because there were too few members to enter into team meets, their coach invited me in. So I’d train with them, and made it to the Kansai league.

–How was your record?

Tanahashi: I started getting pretty good by my third year. In fourth year I was able to compete at the inter college level.

–Was there anyone from those inter college meets that made it to the pro level?

Tanahashi: Hmm, I don’t know… but two years after me was Toru Yano, and then after him were Hirooki Goto and Shinsuke Nakamura. Out of Kobe, right? Anyway, I crashed out in the first round (laughs).

–You had a bigger presence in the Student Pro circle.

Tanahashi: Oh yeah. I was pretty cut then, too. We’d put out pamphlets at the school festivals. I was listed at two meters tall, 100kg (laughs).

–You worked your stats (laughs). So how was the Student Pro-Wrestling experience?

Tanahashi: It was fun! And I think it was an epiphany for me. To be surrounded by all these people who loved wrestling, enjoying it.

–So was the training strict?

Tanahashi: No, not at all. We’d each lift weights, that was about it. We didn’t have a place to practice, so when we had matches and put the ring up, we’d have the judo club members teach us how to bump.

–How often did you have matches, then?

Tanahashi: Oh, only around fresher’s season and when there were festivals. About three times a year. So I had plenty of time to throw myself into amateur wrestling and tennis. And to party, obviously (laughs).

–A full student life (laughs). There was one other famous figure in your wrestling circle, right? The comedian RG was one year above you?

Tanahashi: I got along great with RG. Izufuchi was a great senpai to me.

Tanahashi’s college years continue in the next installment June 3!