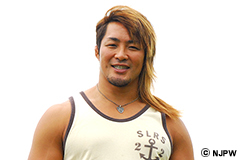 –Last time, we spoke about your period as a Student Pro-Wrestler. You said you were good friends with later comedian RG.

Tanahashi: He was a cool guy! He rode a sweet Kawasaki Ninja bike, liked a lot of cool music, was super fashionable. He was really cool in those days. A bit different to the character that became famous on TV. (laughs)

–Is that so…(laughs). I hear RG was always playing for laughs when you were doing Student Pro-Wrestling, but you were a little more by the book.

Tanahashi: Right, that was the position I naturally fell into I guess. But at these Student Pro-Wrestling events, you usually had live commentary going on during the matches over a loudhailer, and they’d always pick on me (laughs)! They’d say things like ‘he looks in control, but he doesn’t have it together!’

–A lot of the acts in Student Pro-Wrestling are tributes of famous stars. Were you that way, too?

Tanahashi: Ah, yes. I was the Ultimate Warrior (laughs).

–No way! I guess it tied in with your physique.

Tanahashi: Right. That was me, too. I just did a lariat and a splash.

–That’s pretty hard to imagine these days! A lot of rumours between fans have spread about you being a rival of RG’s famous comedy double act partner, HG.

Tanahashi: That’s right. He went to a different school, but their Student Pro circle would often hold events with ours at Ritsumei. He was doing a lot of martial arts, and his kicks were stiff as hell. That, I remember (laughs).

–Did you connect much away from those matches?

Tanahashi: No, Sumitani (HG’s real name) was a pretty quiet guy. He and RG really loved American wrestling, so that’s how they connected.

–That’s why they called their double act Razor Ramon. What was it like wrestling him?

Tanahashi: He’s a big guy, 185cm tall. Thinking back, we had a couple of matches and did some pretty dangerous stuff. I remember a Michinoku Driver off the top… (laughs)

–So was there anyone else from that era in Student Pro that went into the pro ranks?

Tanahashi: No, I don’t think so. There was one guy who started in ZERO1’s dojo, but he got hurt and quit.

–I see. So while you were doing Student Pro, was the real thing on your mind?

Tanahashi: Oh yeah. I was getting bigger at the time as well. I decided to take the NJPW tryout in my second year in college, and if they let me in, I’d have quit school.

–Woah. So what did your parents make of that?

Tanahashi: Well, I didn’t tell them (laughs). But they were both very supportive of what I wanted to do.

–Haha! I bet that got quite a reaction.

Tanahashi: Everyone was like ‘what’s this guy doing in law school?’ (laughs)

–Well, that’s to be expected.

Tanahashi: I think what convinced me was being able to put the weight on that I did. I was 65kg (143lb) out of high school, and by the end of my freshman college year I was 80kg (176lb), so I figured ‘a little bit more and I can be a junior heavyweight’.

Tanahashi: And it wasn’t fat either. I’d be buying clothes all the time and not fitting in them, it wasn’t the best for a student’s bank balance.

–Was all that training self taught?

Tanahashi: Yeah. I put a lot of emphasis on eating tons as well. You know, university cafeteria are really cheap, right? 3 or 400 Yen a meal for the students. I’d be spending over 1000 Yen every time!

Tanahashi: And I’d have supplements and protein. I couldn’t be bothered making a protein shake, so I’d eat the powder as is and then slug a load of water.

–You let your stomach do the ‘shake’ part (laughs).

Tanahashi: I’d always take this huge rucksack everywhere at college, but it was less books and more protein, cans of tuna and bananas. If there was an earthquake, I’d be good for a week! (laughs)

–You must have stood out on campus.

Tanahashi: Oh, for sure. That huige bag, and tanktops every day to show how ripped I was getting! (laughs)

In part 7, we finish our look at Tanahashi’s college years as he gets ready to turn pro!