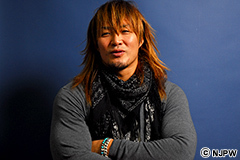 –We’ve spoken a lot about your extra curricular activities, but how did you do as a student at university?

Tanahashi: Not so great (laughs). I didn’t get the grades I needed even in freshman year, so it was pretty touch and go right up to graduation.

–All play and no work?

Tanahashi: Perhaps (laughs). I had a part time job, and there was wrestling, so…

–And trying your luck with the girls in the tennis club?

Tanahashi: Ahh, that too (laughs). I did tennis once a week. To be honest, I only chose the tennis club for the chance to hit on girls, but itdidn’t really happen. Not the best choice.

–Your dating life took a hit?

Tanahashi: But I still had a girlfriend from high school. Before I got into university, she said ‘once we get to college, I understand…’

Tanahashi: Heheh. But she had me, I think. When she decided to go to school in Osaka, I immediately started looking for schools in the Kansai area, and eventually got into Ritsumei.

–She inspired you to get into Ritsumei, then?

Tanahashi: It’s amazing what someone can do with the right motivation (laughs).

–So her being there made you rethink the student playboy life?

Tanahashi: Right. In the end though, we broke up my second year. Snowboarding was really fashionable at the time and she kept wanting to go, but I was too busy going to wrestling matches.

–You didn’t pay her enough attention.

Tanahashi: Yeah. She wound up getting a winter job at a ski lodge and then started dating some snowboarder. It was my fault really, I guess.

–It was wrestling vs snowboarding, and…

–That’s quite the image.

Tanahashi: But not long after that, when I was at driving school I borrowed a pen from a woman sitting next to me. We hit it off and next thing I knew I was dating her. There was quite the age gap; I was 19 and she was 27.

Tanahashi: I’ve always had a thing for older women… Hang on, this series is making me sound like Yujiro Takahashi or something.

Tanahashi: No, not really; I never pushed any of my girlfriends into it. I went with my ex to Osaka to see Scott Norton and Manabu Nakanishi for the IWGP title in winter of my freshman year, but she didn’t get too invested. It wasn’t long after that she started seeing The Snowboarder (laughs).

–So what part time jobs did you have during your student years?

Tanahashi: Oh, all sorts… I got fired from MUJI for one…

–No way! Really? What did you do to get fired from MUJI?

Tanahashi: Well, I didn’t have the best of attitudes, fo rone. I sued to be on register duty in a pretty quiet period of the day…

Tanahashi: So I’d get down under the counter and do pushups.

–Ahaha! You were diligent in a way then, just not when it came to your job!

Tanahashi: So then one time a customer came in…

–And you didn’t realise?

Tanahashi: Right. She called another attendant and I got caught doing my pushups. I should have done squats I guess! So my boss said ‘either you quit doing pushups, or you quit this job, which is it?’. I quit the job! (laughs)

Tanahashi: A little bit of the Kyoto night life, you know…I worked in some high end clubs, with a suit and bow tie.

Tanahashi: Yeah. I’d get to scarf down any sushi the punters left behind, or what was left over in the kitchen at the end of the day.

–A far cry from the Ace we know today then!

Next week in Ace’s HIGH #8, Tanahashi talks about taking the NJPW tryout!