Jay White speaks on what the NJPW landscape will look like on his return! 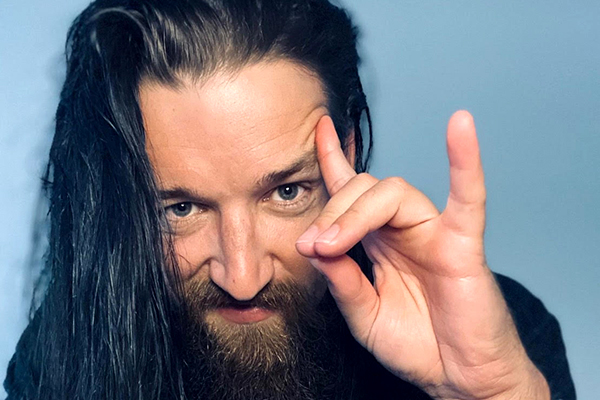 (This interview was conducted in early June)

I’m here in Florida, and all the champions are in Japan…

–After a long absence, different parts of the world are beginning to set a road map to returning from Coronavirus.

Jay:  I expect you’re going to ask me what I think about NJPW matches coming back.

–When we do come back, it will have been over three months between matches.

Jay: It’s a long time. Everyone will have reset in a way.

–And it will make for a very competitive situation. Everyone will be looking to make a statement, especially against our champions. How do you feel about that?

Jay: Well, I might not have much of a choice in what happens when we come back. 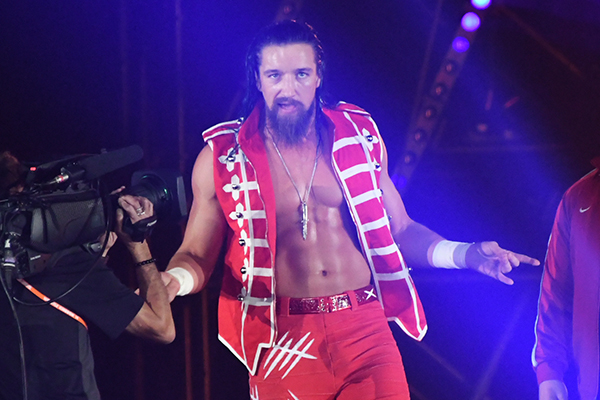 Jay: I’m here in Florida right now, while every champion is in Japan, correct?

–With the exception of IWGP US Heavyweight Champion Jon Moxley, every other champion in NJPW right now is Japanese, yes.

Jay: So it could be that when matches return, or when wrestlers are trying to get involved in championship situations, making their case to the company before matches get made,  the Japanese wrestlers are going to have an unfair advantage because they’re in the country, while guys like me have to deal with travel restrictions.

–You have to take a wait and see approach and see what plays out.

White: There’s no sense in getting frustrated if somebody in Japan steps right up to Naito and makes a case to go for his titles. There’s bigger things at play that might stop me from getting involved.

–But when you do get back to Japan…

White: All I’ll say is that once the championships are in reach again, then you can be damn sure I know I’m first in line.

I only rely on myself 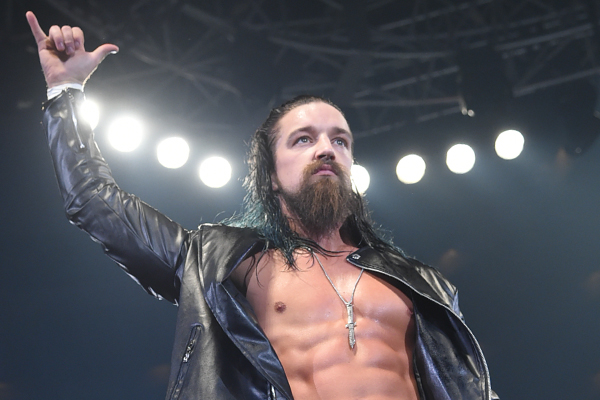 –A lot of wrestlers have talked about how they’ve given extra time to healing injuries and working out during this period.

Jay: The biggest positive of all of this has been getting a well earned rest, after being the hardest working guy in wrestling for the last seven years.

–When we spoke to El Phantasmo, he talked about how the time off will change people’s style in ring. Do you agree with that?

Jay: Mentally? People will be more fired up perhaps, but I’m always one to think about what I’m doing and act accordingly. I wouldn’t say my style would change.

–More physically. Phantasmo suggested that after months of not taking bumps every night on the road, the first big hit could be a knockout blow.

Jay: Gym shape and ring shape are two very different things. I remember when I was first starting out, after the first day I rained in a ring, I couldn’t lift my head off the pillow the next morning. I think guys will feel it in their neck muscles. Maybe in the ring during the matches adrenaline will carry you through, but people will be a lot more sore the day afterward.

–It might take time for that conditioning to come back.

Jay: I see that only really being a factor for the first two or three matches though. The NJPW style that fans know and love, and that I don’t wrestle in, I don’t see that changing.

–The first matches back for NJPW will be without fans in attendance. Would that change how you approach a match?

–You wouldn’t change your gameplan?

Jay: Well, certain guys, not all of us, rely on the fans. They’re going to be in trouble because they can’t rely on the crowd to give them an extra little bit of energy.

–But that’s not you.

Jay: I only rely on myself. Whether there’s fans there or not, it makes no difference to me. If anything it’ll help me in the ring because that fan support isn’t there for my opponents.

–We often talk about the crowd making the difference for a lot of wrestlers.

Jay: But that said, those wrestlers that get energy from the crowd are the same guys that make stupid mistakes, because they’re too worried about playing to the fans and what they think rather than what they’re doing in the ring. Without the crowds, they might not make those mistakes. But I’ll have to adapt like I always will.

He’s not my target, because he doesn’t have the belts

–Before matches were cancelled, you were scheduled to face Kazuchika Okada in the first round of the New Japan Cup.

–And you’ve spoken about him since on social media and on the BULLET CLUB Five Shots YouTube show. Is he a target when you are back in Japan?

Jay: He’s not my target, because he doesn’t have the belts. I was only talking about him because he happened to be in my sights for the New Japan Cup.

–So it was only business?

–He’s not your top priority.

Jay: No, he doesn’t matter right now, because he isn’t the Heavyweight and Intercontinental Champion.

–So your target is both championship belts.

Jay: It only makes sense that it should be.

As unlikely as it may seem, I’m on the same page as Tetsuya Naito 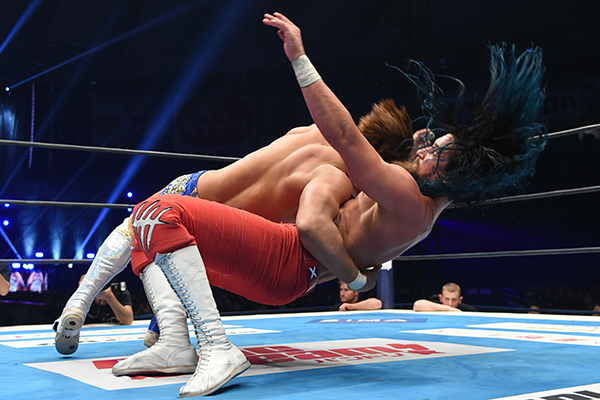 –Ever since Tetsuya Naito won the titles on January 5 there has been a lot of debate over whether the titles should be defended individually or together.

Jay: I think for Naito, whether he defends the titles together or not should depend on who he faces.

Jay: Well, look, if it was someone like myself, I was in the Double Gold Dash. He beat me and took my Intercontinental Championship on night one at Wrestle Kingdom, and on night two, I beat Kota Ibushi, so there’s a very good reason why I should be the first in line.

Jay: But, let’s say it’s someone that’s lucky and gets a chance they shouldn’t be getting.

Jay: Oh, I don’t know. Goto. Let’s use Hirooki Goto as an example, because I’ve had to deal with that son-of-a-bitch too many times because he keeps getting chances that he shouldn’t. If he gets given a shot, as unlikely as it may seem, I’m going to be on the same page as Tetsuya Naito. There is no way Goto should be able to challenge for both titles. Naito should choose.

Naito had made history, but everybody was talking about KENTA 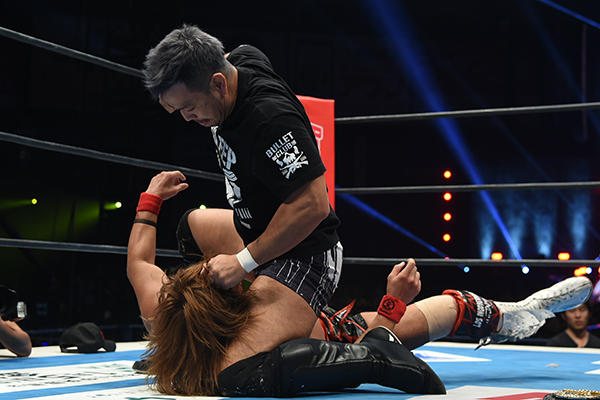 Jay: Well, Naito and I are very different but sometimes we think in similar ways.

–Was NJPW right to make that match a double title match?

Jay: In that case, yes it was the right decision, just because of how the match came about. Naito had made history by becoming the first double champion on January 5, but who was everybody talking about after that night?

–KENTA, after he attacked Naito.

Jay: Exactly. He knocked Naito out and held up both belts. Of course he should be in line for both titles. Now, let’s say KENTA won a tag match or something and then made a challenge in his backstage comments. That would be a different situation, it shouldn’t be a double title match in that case. But KENTA made a huge physical statement at the Tokyo Dome.

–Was there ever tension about KENTA going for that next title shot instead of you?

–But let’s say the result had been different from what it was in Osaka. Say KENTA did beat Tetsuya Naito and was IWGP Intercontinental and Heavyweight Champion. Would you be stepping up to challenge him right away, or would you allow KENTA that space as champion?

Jay: That’s not something I should have to tell you, but honestly, I think I would have sat back and let him run with it. Well, maybe ‘let him’ is the wrong word. He doesn’t have to ask me for permission.

–You don’t see yourself as his superior.

Jay: Look, I hate to say it, but I didn’t win both titles at Wrestle Kingdom. If he had been able to do what I couldn’t then he would absolutely have earned the chance to enjoy that reign. We look after each other and support each other in BULLET CLUB.

Naito should consider himself lucky 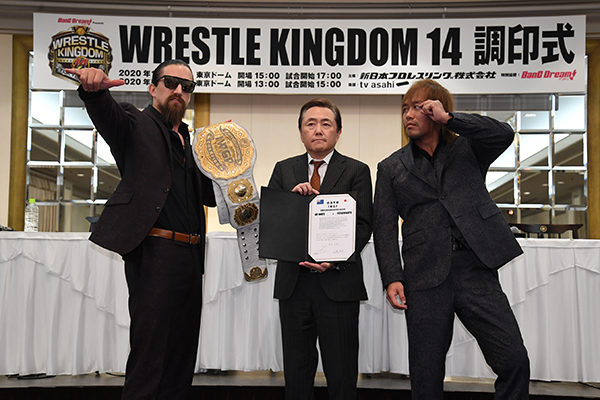 –To go back to Tetsuya Naito, Kota Ibushi said in our interview back in April that it ‘wasn’t fair’ Naito went into Wrestle Kingdom 14 with nothing at stake and left with everything.

Jay: That’s exactly what I had said before the Tokyo Dome.

–Has your opinion of Naito changed since he won both the titles?

Jay: No. Whether he walked away with both titles in the end or not doesn’t change the fact that he shouldn’t have been in that spot to begin with. Ibushi had the (G1 briefcase), I had one championship and Okada had the other. When was the Double Gold Dash announced?

–After Power Struggle in November.

Jay: And what did Naito do on that card?

Jay: See? Exactly. Why does that mean he gets a main event in the Tokyo Dome? I beat Naito twice in a row, and all he did was beat Taichi to get in that spot. Naito should consider himself lucky. I shouldn’t have even had a match on January 4, but the company had other plans, obviously.