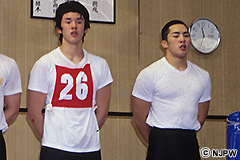 –Last time we talked about your first two tryouts with NJPW, but did you ever consider trying out with other promotions?

Tanahashi: No, NJPW was always the choice for me. Back then, New and All Japan were both major promotions in Japan, but AJPW had more of a retro, rougher feel. NJPW was a much more polished product, and their wrestlers felt like much bigger stars.

–So it was always NJPW for you.

Tanahashi: That influence of the Three Musketeers was definitely there. I really felt ‘if I can get in here and work hard, I can be this huge star like them’.

–You finally got into the NJPW Dojo on your third attempt. When was that tryout?

Tanahashi: Third year of university, so it would have been around November of ’97. I got in with (Wataru) Inoue and (Katsuyori) Shibata, as well as Nijima, who works as a trainer for us now, and one other guy.

–Who was in charge of the tryout?

–You had been preparing for that third test.

Tanahashi: Well, I knew what was coming, right? (laughs). It was a close thing though. When we were doing squats, as you come back up you’re supposed to bring your legs straight, but I was trying to save my legs, so I didn’t go all the way up. When I noticed Black Cat was looking at me, I changed my tune pretty quick.

–You can’t game the system! You sparred with Shibata during that tryout, right?

Tanahashi: Right! We rolled on the mat for a bit. He was still a teenager at that point, just out of high school, and pretty skinny.

–That was your first encounter with Shibata.

Tanahashi: Yeah, but for some reason I knew he was the referee Shibata’s son. So it was ‘oh, so this is the guy.’

–What were your family and friends’ reactions at getting into the Dojo?

Tanahashi: Well, my parents didn’t really react too much one way or the other. But I heard from my mom afterward that she talked to her colleagues and friends a lot about it. Like ‘my son wants to be a pro-wrestler. Is that really OK?’ Kind of thing.

–She was worried about you.

Tanahashi: If you aren’t connected with it wrestling seems a pretty strange business to be in, right? Her friends all told her ‘he should go for it, it sounds great!’ But she told me she was crying at night about it.

–Mixed emotions. How about your younger brother? You mentioned when you first started getting into watching wrestling, it was with him.

Tanahashi: I was living by myself at this point, so we didn’t communicate as much, but I’d half joke with him that he should try out as well.

–Was he athletic, then?

Tanahashi: He was a pitcher on the baseball team, and much better than I ever was. 189cm and handsome as hell. We could have been the first big brothers tag team in NJPW since the Takanos.

Tanahashi: But he got involved in a pretty serious bike accident when he was 19, and broke his leg quite badly. That was right around the time I got into the business, so it was a rough time for my parents.

Tanahashi: One kid nearly died in that accident, and another was going off to risk his life every day for a living. But they gave their blessing. My dad would say later that when I left for university he felt that I wouldn’t be coming back. He wrote me a letter…

–What did it say?

Tanahashi: I remember it well. ‘Always know who the man is, look after yourself, enjoy it.’ He understood me, and I think he knew I tend to stand out, so he wanted me to remember to read the room.

–A lot of love in that sentiment though. So what does your brother do now?

Tanahashi: He works in planning for the construction industry in Nagoya. He’s helped build some pretty big bridges, actually.

–And how did the Student Pro-Wrestling circle take your success?

Tanahashi: They were really happy for me. When I told them I was going for the tryout, they encouraged me, said I’d do it for sure, and they stayed with me even after I failed twice. I’d be doing 500, 1000 squats to get ready, and some of those guys would be doing the same right with me. They really helped a ton.

–They really supported you.

Tanahashi: Yeah! That was all in the third year of four at university. Everyone else spends that last few months job hunting, and here I was, my job already lined up! I used to love writing that down: future job offers: New Japan Pro-Wrestling.

–That had to feel pretty cool.

Tanahashi: But there was a lot that happened before I got in…

Find out in The Journey There July 1!