New Japan Cup is heating up, with the huge announcement of live prime-time BS Asahi coverage Friday night July 3, for the first time in 34 years, and accompanied by a free airing of the event on NJPW World.  There’s plenty of great archival content to join the live action though, as we shall see… 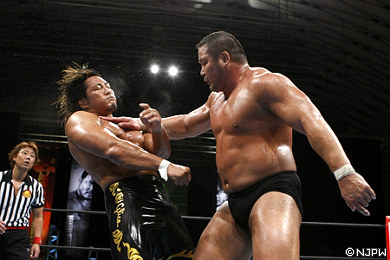 One month after a German suplex sent shockwaves through NJPW, and the reaction of Korakuen Hall saw enough shockwaves for noise complaints to be made to the police, Manabu Nakanishi had much to prove. After 17 years of long hard struggle, he was finally IWGP Heavyweight Champion, but now he had to stay that way.

His championship opportunity came in the most unexpected of circumstances; a friendly singles match made because guest wrestlers from CMLL were unable to travel suddenly became a title match when fighting champion Hiroshi Tanahashi made it so. Always preparing for just such an opportunity, Nakanishi abandoned his normally selfless manner to fight for himself for a change, and the result was a resounding victory.

At Dominion however, he faced his first defence against a humbled Tanahashi who had some six weeks to take stock, re-assess and prepare for the Yajin. The Ace was even tougher and more dangerous without the title than he was with it.

Fast forwarding five years to Dominion 2014, it was a battle for the IWGP Junior Heavyweight Championship that earned match of the night from many a fan in attendance. Weeks earlier, Ricochet had won the Best of the Super Junior on only his second attempt, after scoring a hard fought win in a match of the year candidate in its own right against KUSHIDA.

That earned the ‘Future of Flight’ an opportunity against Kota Ibushi, who had held the junior gold since Wrestle Kingdom 8. Before he made his transition to the heavyweight ranks, Ibushi was regarded as the world’s best high flier, but at Dominion 2014, he would confess to seeing the future standing across from him.

Ricochet’s high flying offense, with a gorgeous Shooting Star Press, was matched by his defence, with an unprecedented counter to a Super Frankensteiner. Later acknowledging that there was ‘no way my regular offense would put him away’, Ibushi dug deep with a move of his own invention: the Phoenix Plex.

For years, the Kokeshi has made people happy in NJPW. Tomoaki Honma really became a beloved member of the roster when siding with Togi Makabe, becoming his only ally when the rest of Great Bash Heel left him behind to form CHAOS. Since then, his unwavering fighting spirit shone through in epic and violent clashes.  Crowds around the world would will on a Kokeshi headbutt, named after the limbless dolls that are a symbol of happiness in Japan, but Honmania was almost put to an end in February 2017.

At an event in Okinawa, Honma would take a Green Killer from Jado and would be unable to find his feet. A severe neck injury left Honma paralysed for a time, and his chances of living a regular life, let alone wrestle in the ring again, were in question. yet he was willed on by his partners in the ring and out. Makabe would visit regularly, and his wife was constantly at Honma’s side, as he took his first steps and then finally worked toward a competitive level. His comeback match in his hometown of Yamagata was one of the most emotional moments of the year. 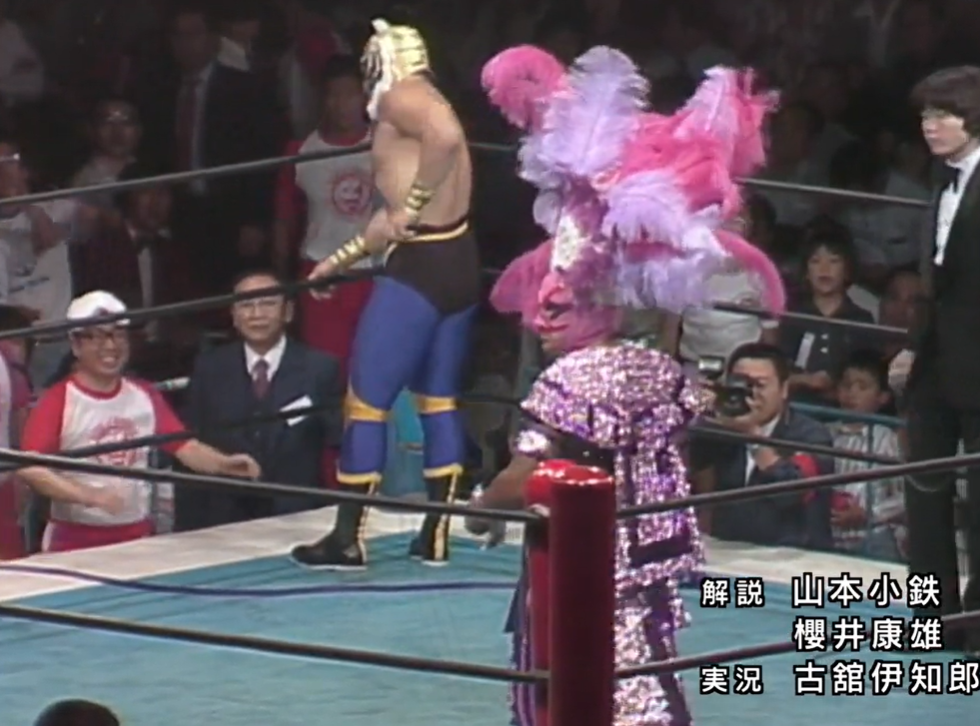 Ever since his debut in April of 1982, Tiger Mask was a revelation. His slick, kinetic style and high risk offense was something completely different for professional wrestling, truly embodying the comic book character and doing the superhuman.

In a real sense, Tiger Mask was showing all of his influences, garnered from starting a learning journey in Japan and developing in Mexico and the UK, all in one package. To that end, his early opponents highlighted each of his influences in turn and showed how the well rounded Tiger was tougher than all of them. After his debut two months before put him opposite the UK’s Dynamite Kid, Tiger Mask spent the summer wrestling with Mexico’s best.

Villano III fit that bill. Part of the famous lucha family, Villano was extravagant in his entrance attire and effective in his approach in ring. The Kuramae crowd were in for a treat. 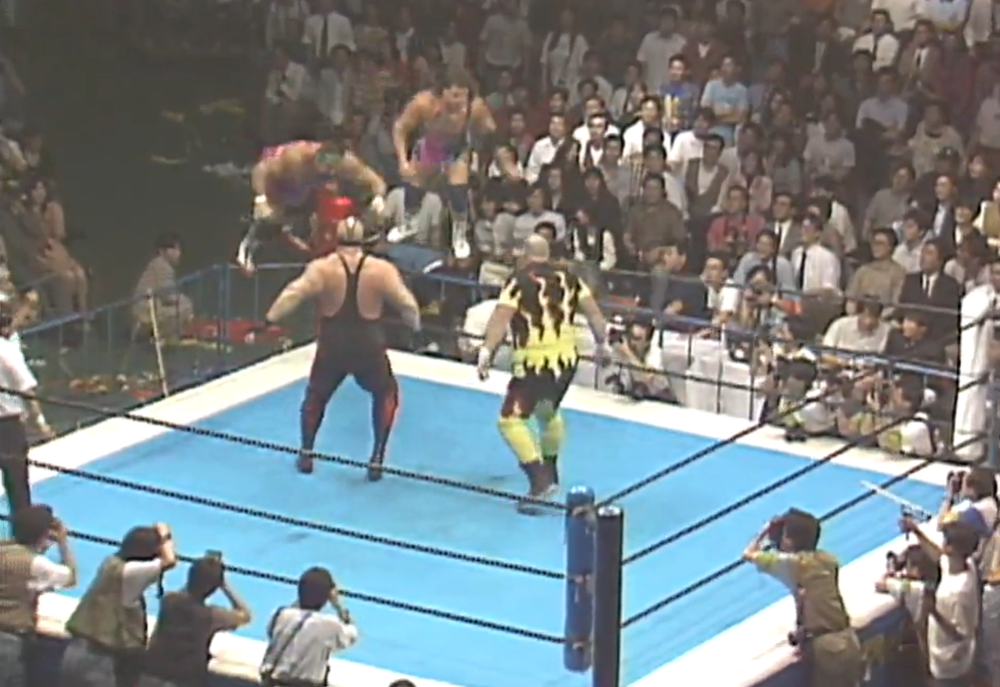 We go from a man who pioneered the super junior heavyweight style to four men who were the epitome of super heavyweights, but moved as athletically as their junior counterparts. In June 1992, the Nippon Budokan bore witness to a stacked card with a championship laden semi main event, as Crusher Bam Bam Bigelow and Big Van Vader took on the Steiner Brothers.

Rivals for the unofficial title of biggest foreign monster, Bigelow and Vader nonetheless developed a mutual respect, and a solid enough team to depose the formidable young combination of Hiroshi hase and Keiji Muto months earlier. They were making their third defence opposite The Steiner Brothers, who were champions in their own right, having won the WCW Tag Team Championships from Arn Anderson and Bobby Eaton that May.

The Steiners were looking for their second IWGP reign, but opposite the biggest opposition conceivable, providing a sumer spectacle and a half for the Budokan faithful.