After the official final was determined on July 3, the full card for the final night on July 11 in Osaka Jo Hall has been determined. 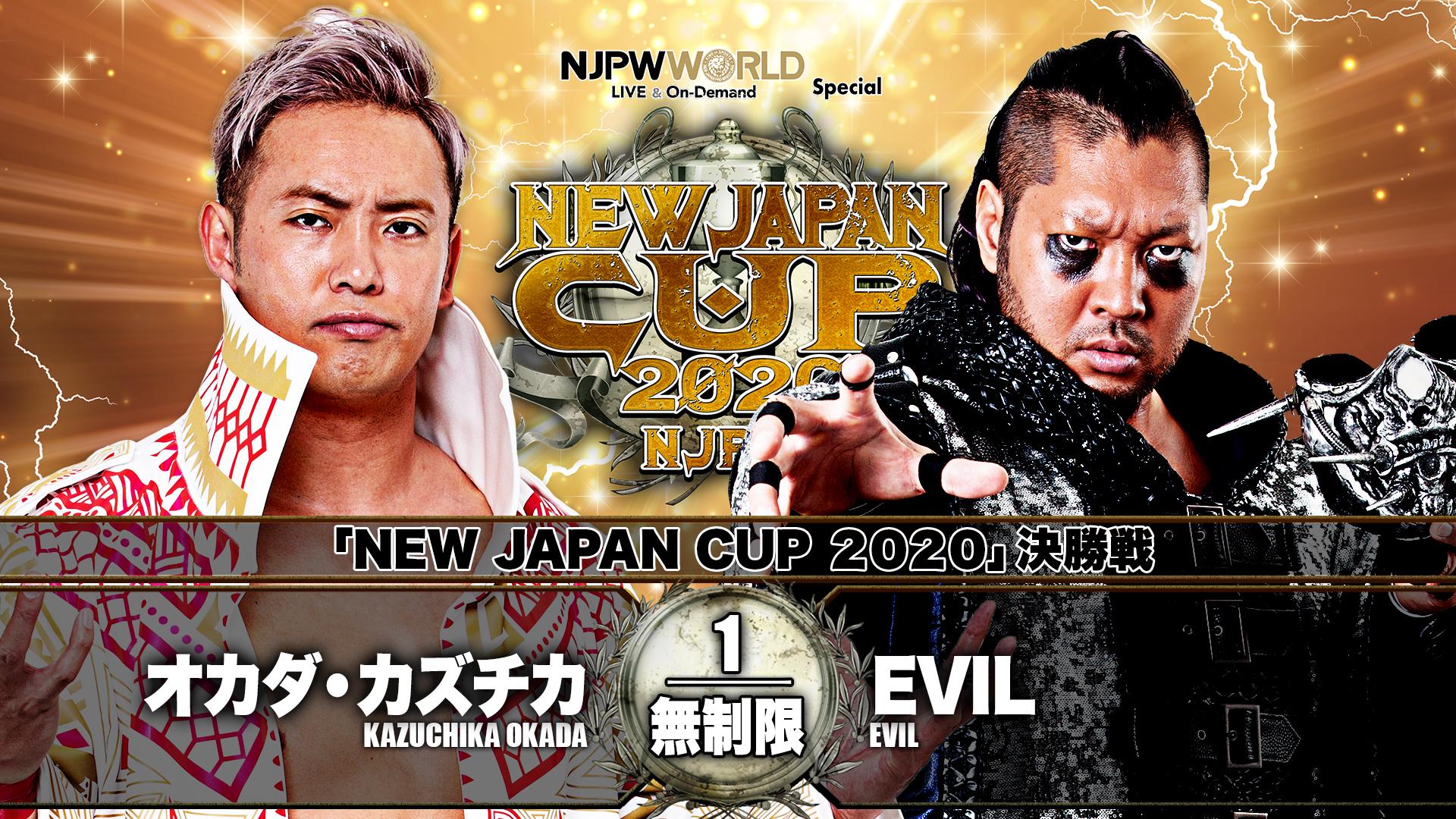 The main event sees Kazuchika Okada take on EVIL, in the same city of Osaka where they first met. Then it was another critical tournament matchup, in the G1 Climax in EDION Arena in 201, where EVIL scored victory after a brutal assault to the Rainmaker; Darkness Falls onto a stack of chairs being the difference maker not just in that bout, but in Okada’s G1 campaign that year, as a seemingly unstoppable run was halted.

That hardcore nature will likely be key for EVIL again should he want to move past Okada and take his spot in the main event of Dominion against Tetsuya Naito. While Okada would more than redress the balance against EVIL in the years since their first meeting, improving to 3-1, this is not the same EVIL that wrestled the Rainmaker last in the 2019 G1 Climax. Apparently responding to criticism that he was in danger of seeming left out of the mix in both the LIJ group and NJPW at large, EVIL has had a transformative New Japan Cup campaign that has seen him truly live up to his name. A low blow was a key to victory against Hirooki Goto, a brutal assault to YOSHI-HASHI saw victory in just two minutes and has since put the Headhunter on the injured list, and on July 3 he seemed to throw away his relationship with his own tag team partner SANADA.

An inhuman steel chair based assault, coupled with two more heavy shots below the belt has proven that EVIL is all in on New Japan Cup victory. Now it’s all or nothing in Osaka for a match EVIL has declared he’ll win ‘by any means necessary’. Yet that is just the attitude needed to have a chance against Kazuchika Okada. Okada has had his own change in approach to in-ring action during the New Japan Cup, adopting a submission based approach to win all of his matches thus far. Showing his incredible versatility, Okada was last able to score the hardest fought of victories over IWGP Junior Heavyweight Champion Hiromu Takahashi, following another high paced match against Taiji Ishimori, a classical straight forward battle with Yuji Nagata, and a match full of underhanded shenanigans with Gedo.

EVIL will bring a similarly dirty fight, but also incredible knock out power and ability of his own. Can EVIL move on to face his LIJ compatriot in the main event of Dominion, or will Okada maintain his perfect attendance record headlining Dominions in Osaka Jo? 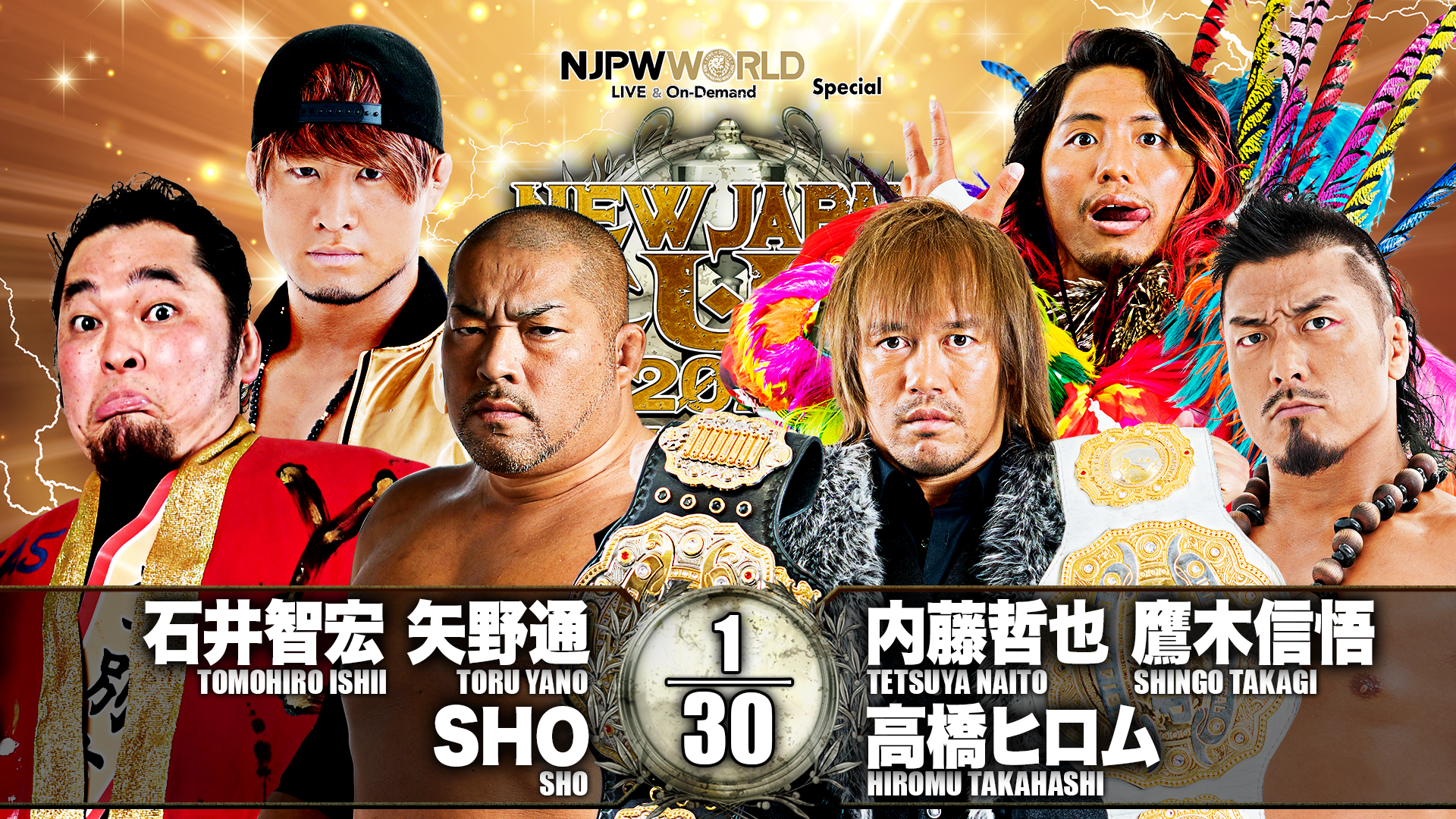 Before the New Japan Cup final takes place, Hiromu Takahashi must make a painful walk down the aisle in osaka Jo Hall knowing that he won’t be able to challenge his tag team partner tonight, Tetsuya Naito, for all the gold. A disappointing result against Okada on July 3 belies an incredible effort in undoubtedly one of the best matches of the tournament.

Another highlight of this year’s New Japan Cup was undoubtedly SHO vs Shingo Takagi. SHO’s first round victory would sow the seeds for a championship challenge against the Dragon, and after initial resistance, an emphatic spear on the semifinal card has seen Takagi relent. At Dominion on July 12, the NEVER Openweight Championship will be on the line when SHO faces Shingo, and neither man will be holding back in this special six man tag preview. 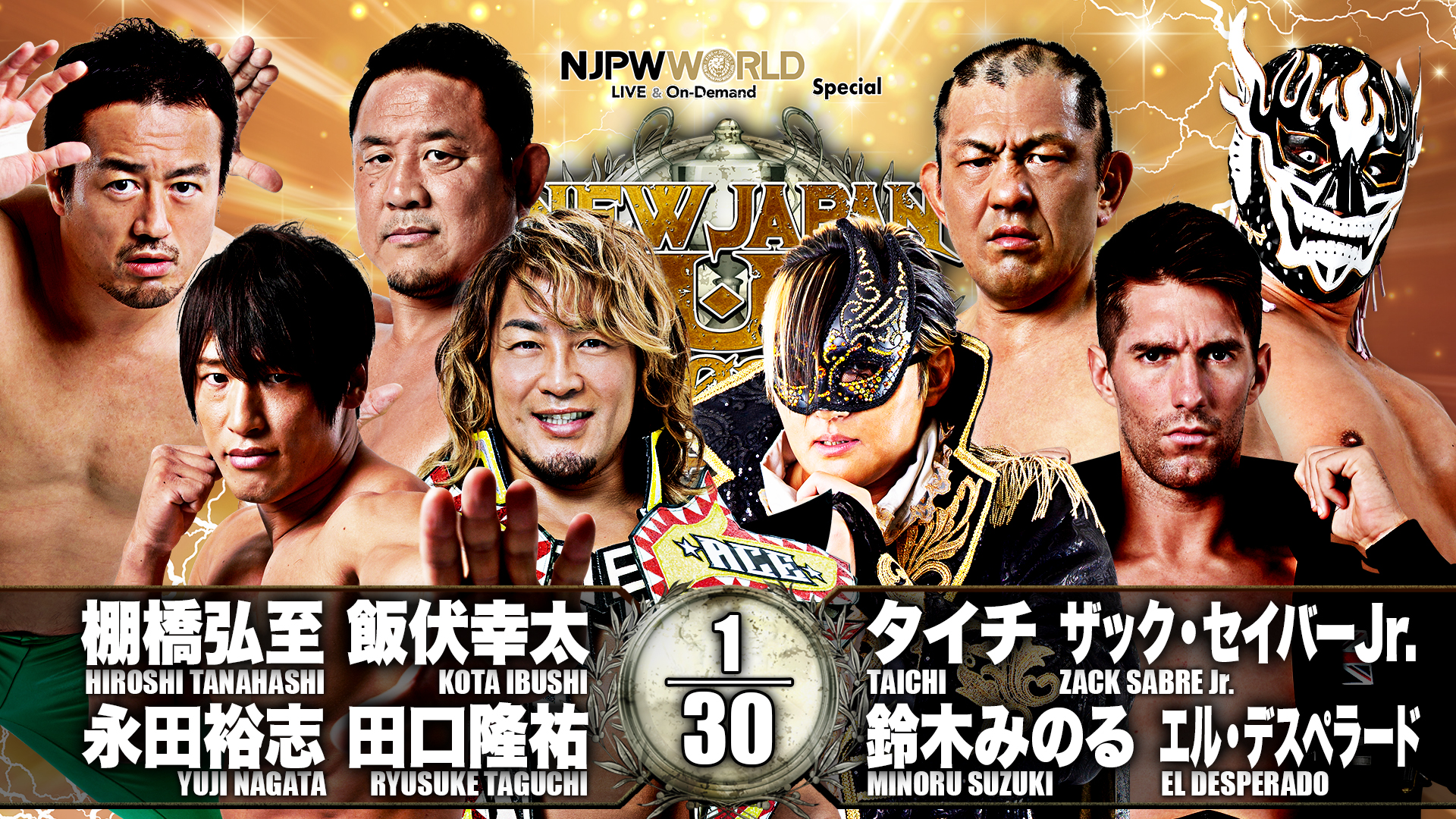 In the minds of Taichi and Zack Sabre Junior, an IWGP Tag Team Championship challenge to Golden☆Ace at Dominion has no doubt been a long time coming. It was February, before events were cancelled in the wake of the Coronavirus pandemic, that Dangerous Tekkers attacked the new champions in Korakuen Hall and immediately seemed to jump the contendership line.

Their claim was cemented however, when Taichi managed to defeat both tag team champions in successive New Japan Cup matches; albeit with the assistance of other Suzuki-Gun members, not least of whom his partner in ZSJ. Stinging cup losses, and a brawl backstage on July 3, will be fresh in the minds of Kota Ibushi and Hiroshi Tanahashi as they head into this eight man preview. 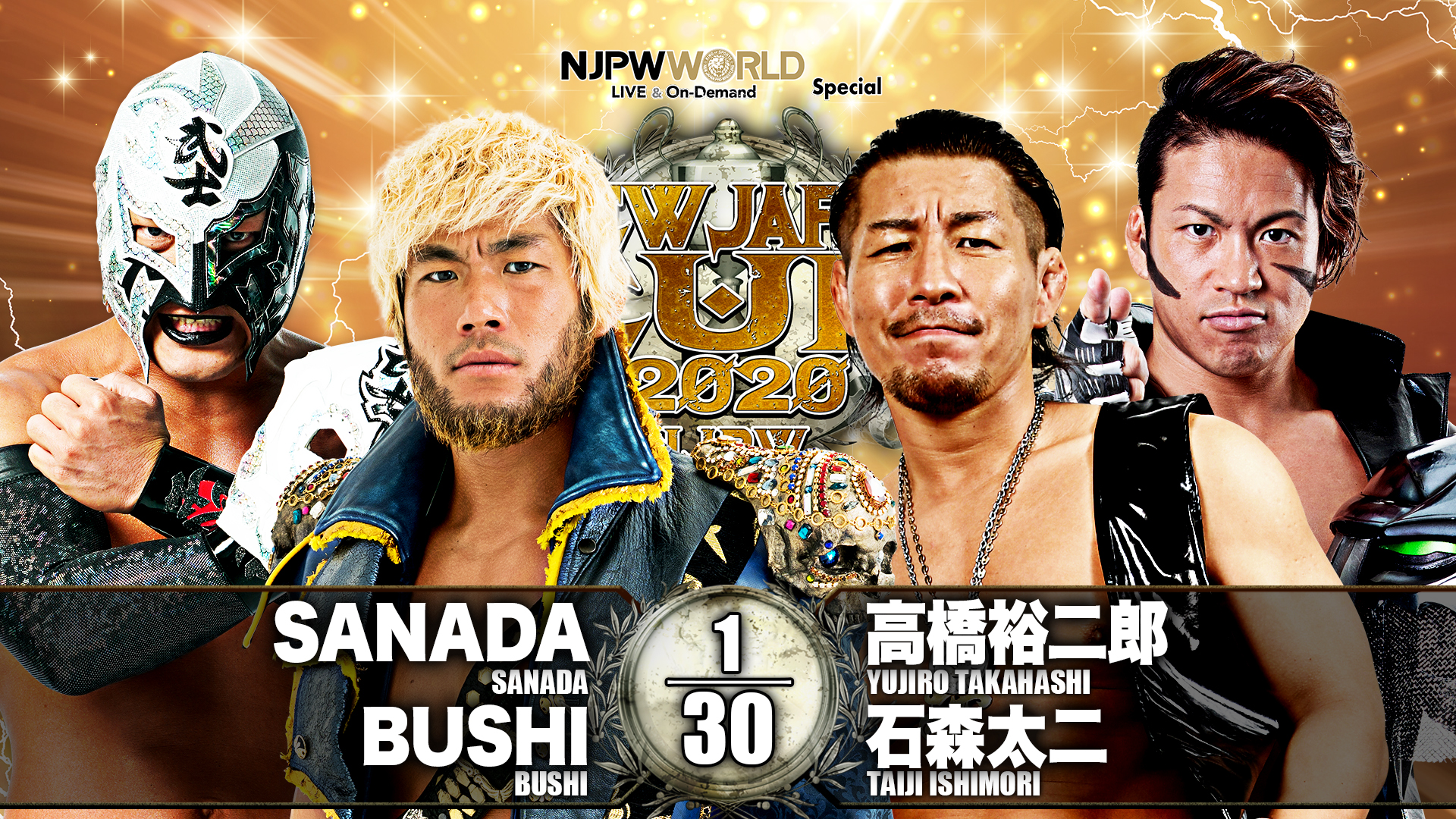 The fourth match of the evening sees junior and heavyweight members of LIJ and BULLET CLUB respectively team up. SANADA will be heading into tonight in Osaka doubtless conflicted after a crushing loss to EVIL in the New Japan Cup semifinals. It wasn’t just the result that hurt for Cold Skull, but the manner in which he lost, as his tag team partner landed a pair of low blows and a vicious steel chair based assault to take his place in the final. For now, a chance to reset, while Yujiro and Ishimori, still separated from many of their teammates, look to fly the BULLET CLUB flag high. 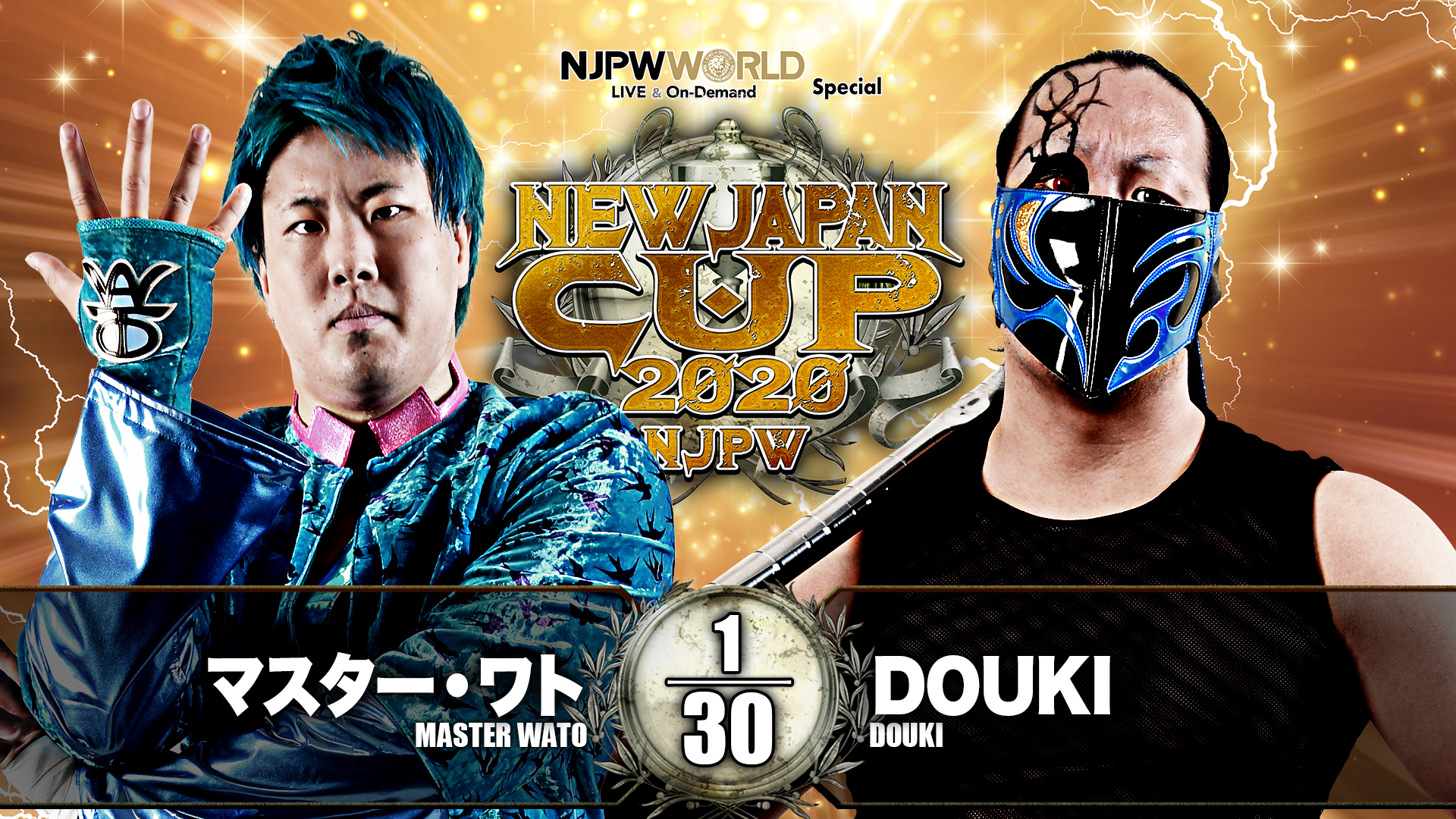 In a singles match on the third bout of the card, we get a first look in ring at Master Wato as he takes on DOUKI. Master Wato made his first appearance on July 3 at the New Japan Cup semifinals. Declaring himself a ‘grand master’, Wato stated that he was going to reach the pinnacle of New Japan Pro-Wrestling before being interrupted in violent fashion by DOUKI and his steel pipe.

DOUKI ruined Wato’s red carpet moment on July 3, and the ‘Master’ was quick to vow revenge. He instantly demanded a singles match against DOUKI, who responded that there had ‘never been as lame a debut’ as Wato’s.  The young Master certainly has much to prove in Osaka, and we’ll see just what he’s capable of on Saturday night. 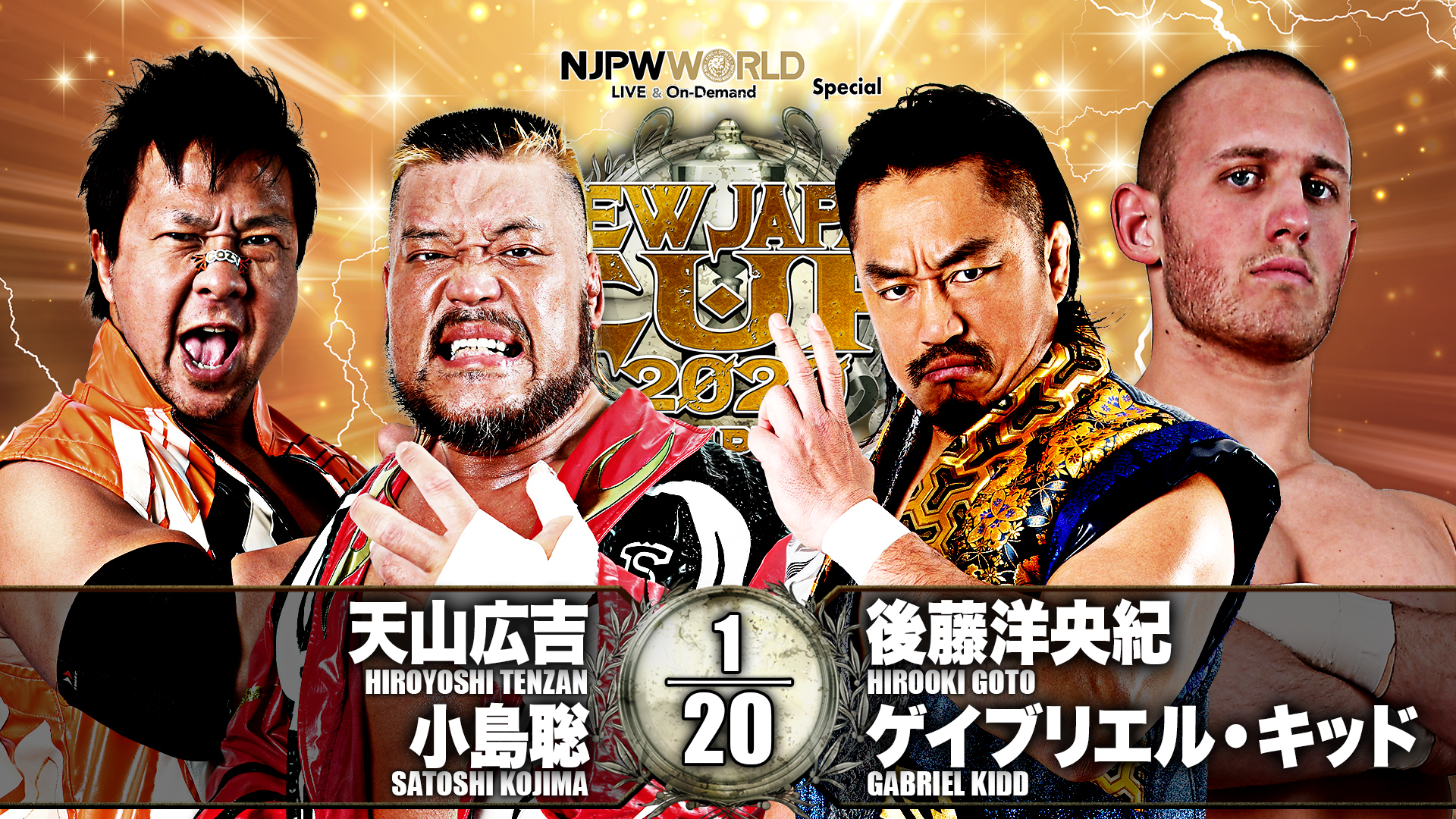 The mix of youth and experience makes for a promising team, but Tenzan and Kojima will be tough to beat, especially after they returned from the long break from events in impressive physical form. This should be an exciting tag encounter early in the card. 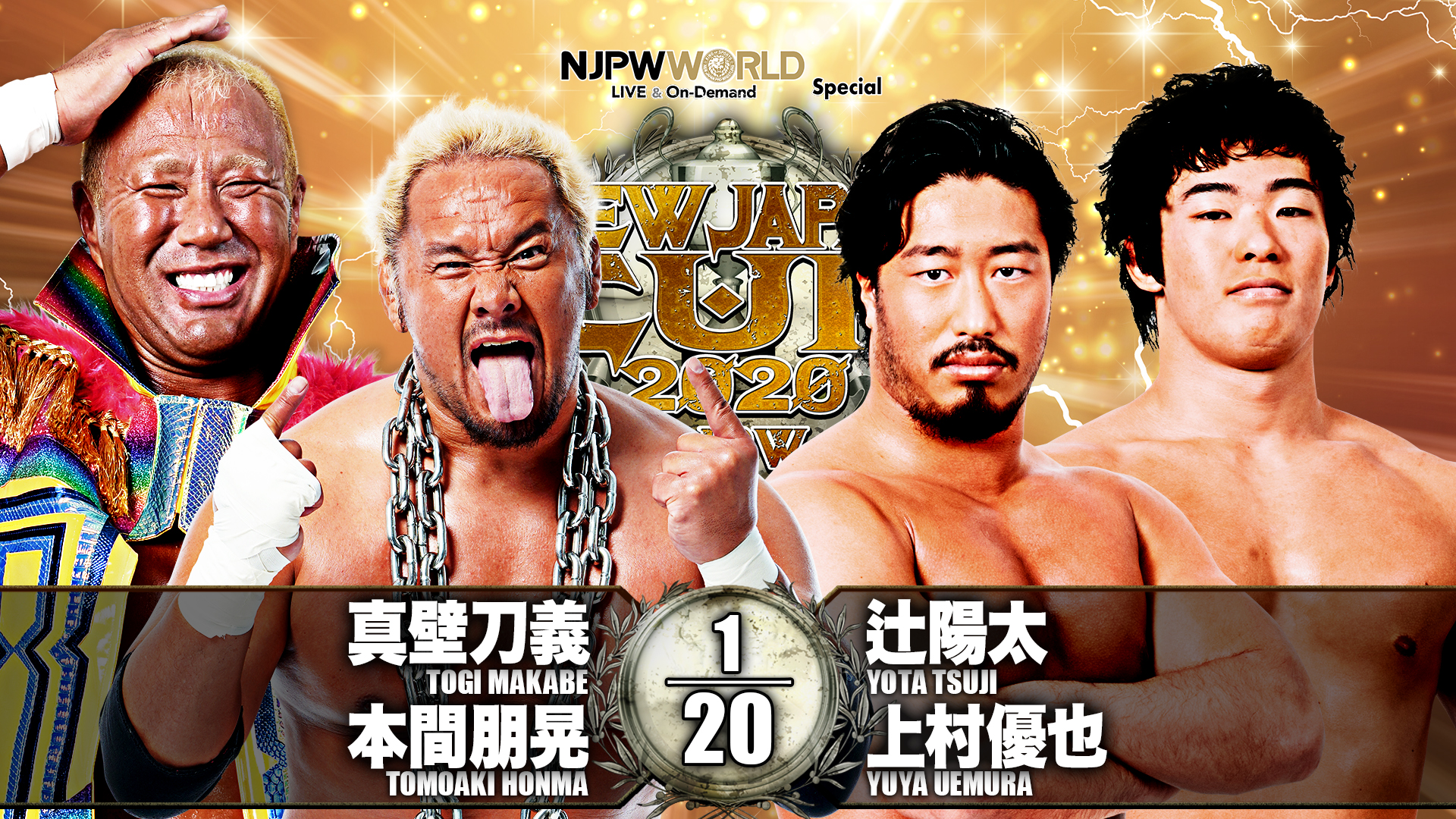 The action kicks off with GBH facing down two Young Lions in Tsuji and Uemura. The Noge Dojo boys had clearly put the work in while NJPW was taking its 110 day absence, and returned in incredible physical form. While neither was able to advance in the New Japan Cup, they both put the work in in the ring as well, most pertinent to this match Tsuji when he battled Makabe. Now a chance to strike another blow against a Dojo mentor in the first match of the evening.