Has EVIL traded LIJ for BULLET CLUB as he takes his first New Japan Cup? 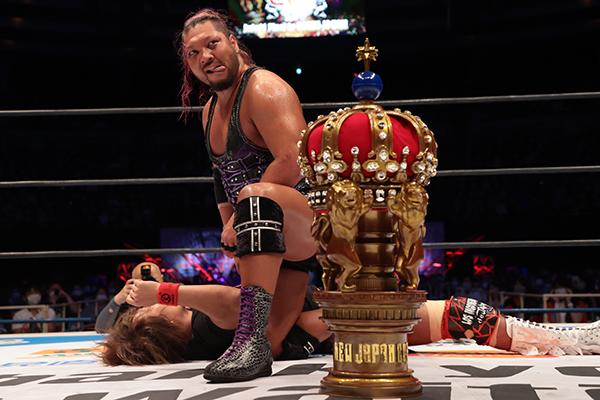 After a three and a half week, 32 man tournament, we came down to the last day on July 11 and the final two participants; Kazuchika Okada, who had shown just what has kept him at the top of NJPW over the last eight years, and EVIL, who had a rocky road of hard hits and controversial results.

EVIL moved fast in the early going, showing in the opening minutes what brought him this far in the tournament. A lariat out the gate rocked Okada and Darkness Falls led to an attempt at EVIL before Okada escaped to the floor and sent his opponent into the guardrail. At the five minute mark however, the King of Darkness was back in firm control, shoving the referee aside as he wrapped first Okada’s left arm and then his neck in trademark steel chairs.

Back in the ring, EVIL would pursue Okada’s other, Rainmaker arm over the ropes as he methodically tore the former IWGP Champion down. Okada would find some distance at ten minutes with a dropkick over the top turnbuckle, and then continued to use his feet to good effect, with a boot sending EVIL over the guardrail from which he would be dropped with a DDT.

Still the damage appeared done. EVIL remained able to swing the pendulum of momentum his way with blows to the arm, as Okada’s responses, from a Flapjack to elbow blows, seemed affected. A Tombstone did connect however, and the Cobra Clutch had EVIL troubled before the King of Darkness extended a foot to the bottom rope. With EVIL troubled, he went with what brought him to the final dance, as Red Shoes Unno was brought into Okada’s path before a low blow had him in the fetal position. 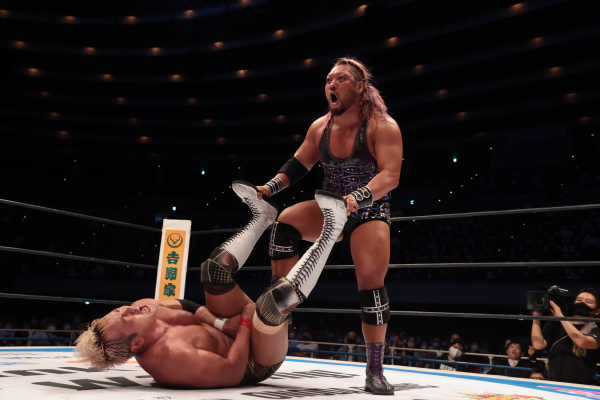 In an eerie echo of three years prior in the city of Osaka, EVIL brought in a stack of chairs on which to deliver Darkness Falls, a dazed Unno only able to count two. Another, nearer two came from a huge top rope suplex. The frustrated EVIL would try and press his advantage with a rake of the eyes, but trademark offense came into play for Okada, a reverse neckbreaker finding the mark as the restricted crowd tried to will both men to their feet.

Instead, the two men traded bombs from their knees before standing, Okada scoring with a huge dropkick and then returning to the Cobra at the 25 minute mark. When EVIL wouldn’t submit, the Rainmaker would pick his man up by the wrist, delivering two short range lariats before going again to the hold in a replay of his victory against Hiromu Takahashi. 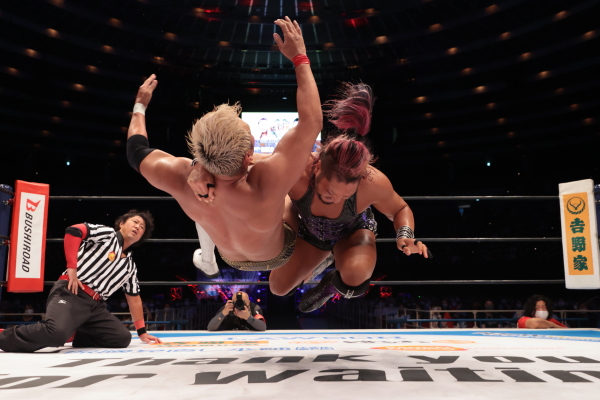 Then, controversy even beyond what had transpired thus far. Gedo made his way to ringside, distracting the referee long enough for Yujiro Takahashi to put Okada on his back. A bemused crowd tried to take things in as EVIL found his feet. The finishing blow still remained elusive as the match passed 30 minutes though, Okada again finding the Cobra Clutch, but two low blows certainly found their mark, and then EVIL struck to bring the New Japan Cup to the King of Darkness.

Post match, Tetsuya Naito headed to the ring to congratulate EVIL, saying he respected the guy who ‘stopped at nothing to get results’, but as he held his fist up to celebrate the ‘first ever all LIJ title match’, EVIL instead threw up two horns, dropping the champion. EVIL exited with BULLET CLUB before saying this was part of the plan all along, and apparently joining BULLET CLUB in advance of a now official title match against Naito at Dominion tomorrow.