After the controversial events of the New Japan Cup final, the full card has now been revealed for Dominion in Osaka Jo Hall, taking place in the afternoon of July 12 Japan time.

Before the New japan Cup got started, Tetsuya Naito had high hopes for EVIL, confident that the King of Darkness would realise the significance of the tournament at this point in his career and step forth. EVIL was Naito’s pick to win the whole tournament, and Naito’s predictions proved accurate; yet there is no way El Ingobernable could have predicted how he would win, and what would happen next.

Last night at the New Japan Cup final, Yujiro Takahashi and Gedo assisted in providing an opening for EVIL to strike Kazuchika Okada low twice, and connect with EVIL to win his first New Japan Cup. Post match, Naito indicated respect to EVIL for doing anything to get results and voiced his excitement at the ‘first all Los Ingobernables title match’ today at Dominion, but EVIL had other plans. Returning a familiar hand signal in response to Naito’s proffered fist bump, EVIL dropped Naito and aligned himself with BULLET CLUB.

A deep personal vein runs through this main event. EVIL was not only Naito’s ‘pareja’ way back at King of Pro-Wrestling 2015, the first member to join what would become Los Ingobernables De Japon. EVIL’s connection with the history making double champion extends further, to Animal Hamaguchi’s Gym, where as a trainee, a devotion to Naito saw the future King of Darkness attend Naito’s debut match out of support. A 13 year connection was thrown away when EVIL joined BULLET CLUB last night, and could give the challenger a major mental edge heading into the biggest match of his career. 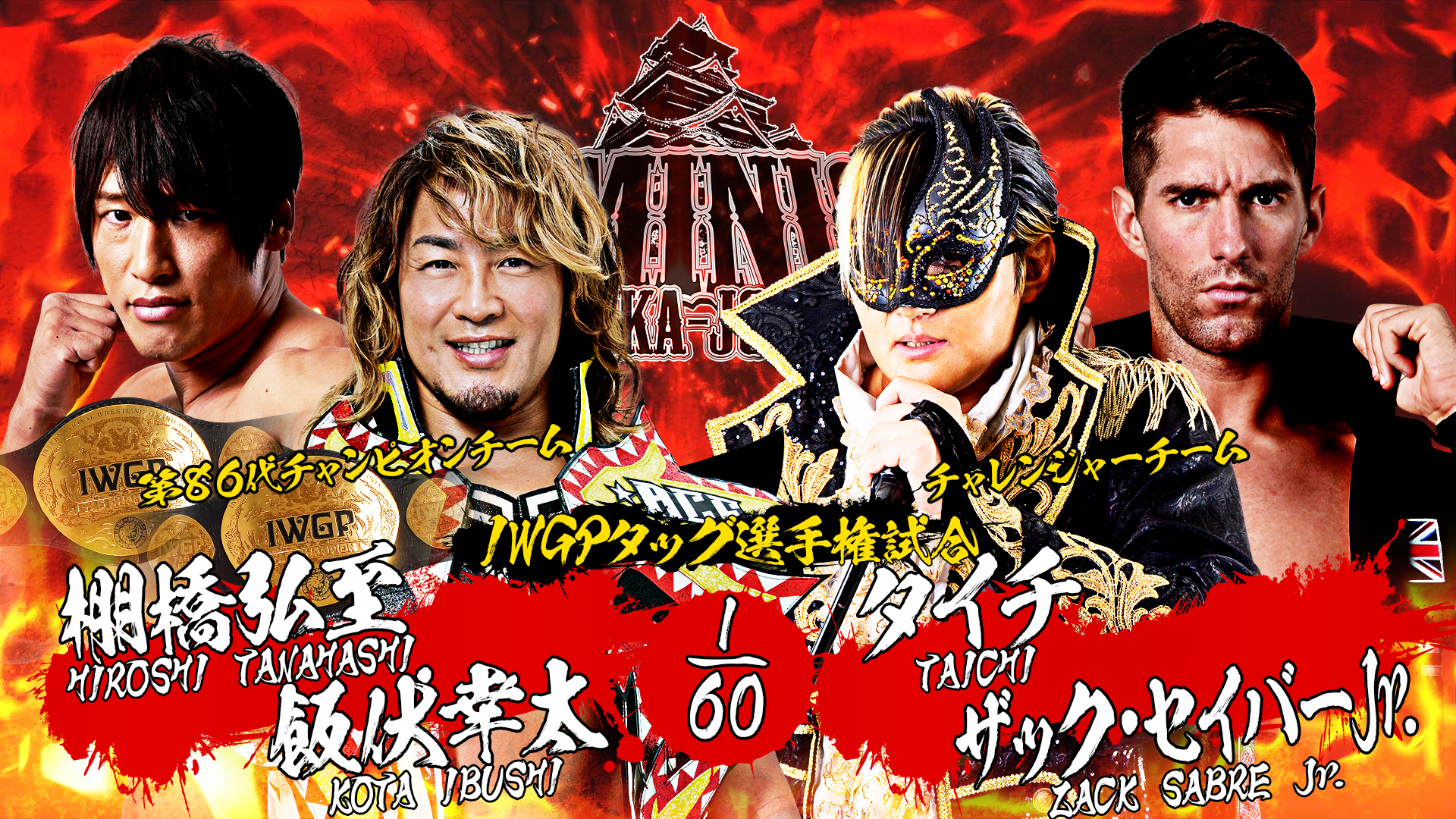 Despite questions over Golden☆Ace’s lack of experience as a team, Ibushi and Tanahashi secured tag team gold from Guerrillas of Destiny war on February 21, with Ibushi winning his first heavyweight tag team championships, and Tanahashi scoring his first tag titles in over 14 years. While both GoD and FinJuice had legitimate claims to a title opportunity though, it was Dangerous Tekkers leaping to the front of the queue. Taichi and Zack Sabre Junior attacked after the Korakuen bell and made their title intentions painfully clear.

Still, the global pandemic put paid to any intentions being acted on for months. When NJPW did return to action, Taichi and ZSJ benefitted most from being the only prospective challenging team to remain in Japan; when New Japan Cup began, it was Taichi making the most of the situation.

Certainly, Dangerous Tekkers’ history as a team together is in their favour. Taichi and ZSJ can point to a strong, 18 point earning performance in last year’s World Tag League that includes a victory over eventual winners FinJuice, but the champions were able to overcome a significant experience gap as a team to win the titles from six time champions GoD in the first place. Post match last night at the New Japan Cup final, it was indeed the champions standing tall over their challengers later today, but a weakened knee for Tanahashi may make a significant difference in this semi-main event. 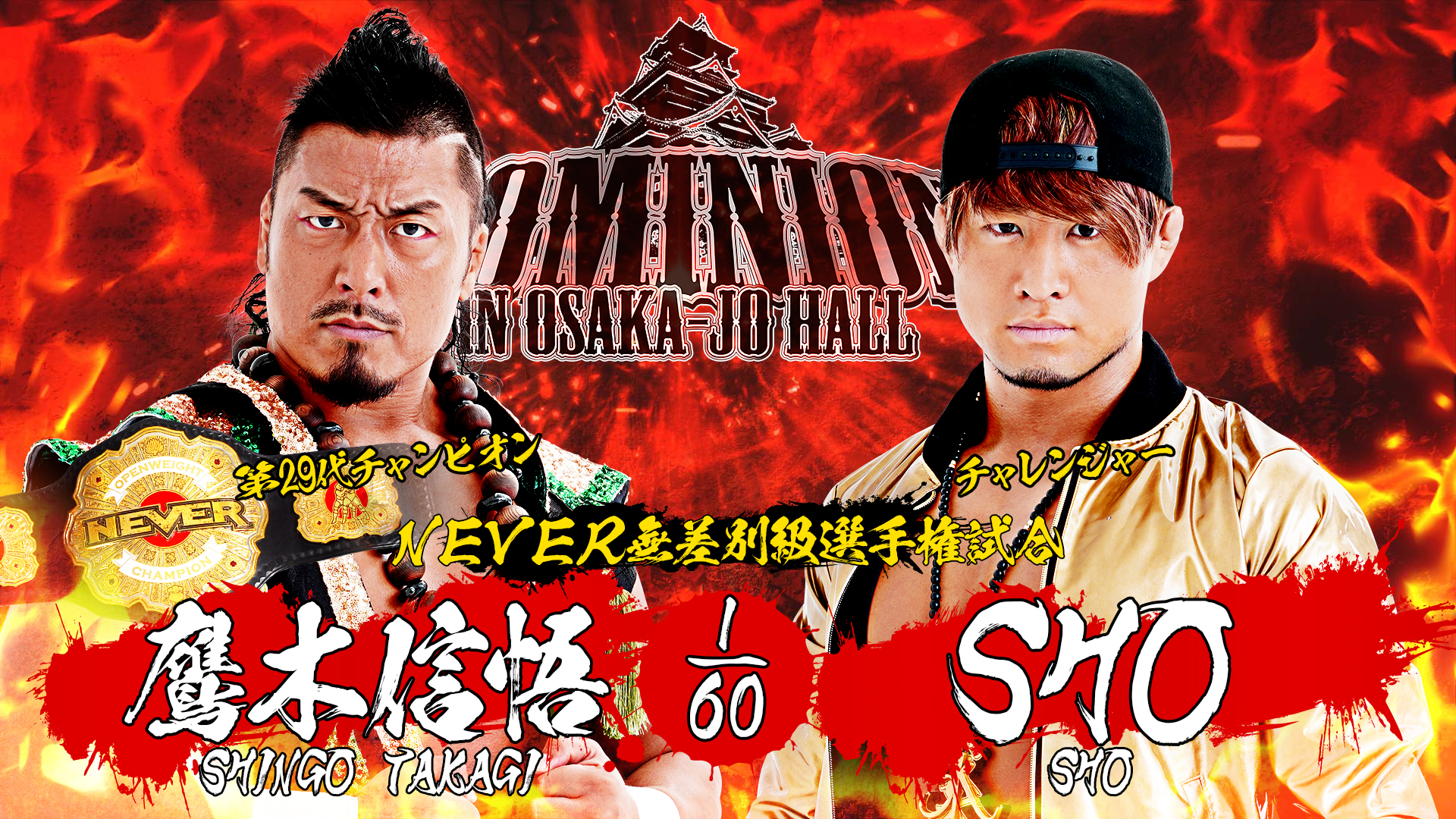 Seeds seemed to be planted for this championship encounter right from the very day Takagi won the title. When Shingo took on Hirooki Goto in Sapporo on February 1, SHO was sitting at ringside for commentary, and upon Takagi’s victory, the two would engage in a tense showdown before the new champion asserted that SHO was getting ideas above his station.

That was only one verbal snipe in a long held issue between both men. When Shingo Takagi made his NJPW debut in October 18, SHO was one of the men on the other side of the ring, and was made to instantly understand that a major competitor to his status as strongest junior heavyweight had arrived. Through clashes for the IWGP Junoir Tag Team Championships, SHO’s distaste for Takagi only continued to develop, until a brutal, hard hitting bout to open last year’s Best of the Super Juniors saw the Roippongi 3K member narrowly defeated.

Takagi would go on to win every match in his block, only falling short in the final, and taking his first pin in NJPW, to Will Ospreay. Entering into the G1, Shingo would declare himself a heavyweight soon after, and his issues with SHO would go on the back burner until the great weight class equalizer of the NEVER Openweight Championship made another match a possibility.

Still, Shingo would deny SHO’s worth as a challenger, even in the wake of their first round New Japan Cup meeting. SHO made the most of his introduction in the tournament, landing heavy hits and using his jiujitsu mastery to take some of the sting from Takagi’s Pumping Bomber arm, before a Shock Arrow led to SHO’s advance and Shingo’s exit.

Takagi would liken himself to the ‘final boss’ of SHO’s videogame campaign, teasing that ‘one victory over me doesn’t mean you’ve beaten the game yet’. On July 3, after a CHAOS vs LIJ tag contest, SHO would deliver a thunderous spear to Takagi before declaring emphatically that he wanted the NEVER gold. Now, with the title on the line, could SHO become only the second junior heavyweight to win the NEVER title, or will he run out of credits against his formidable foe? 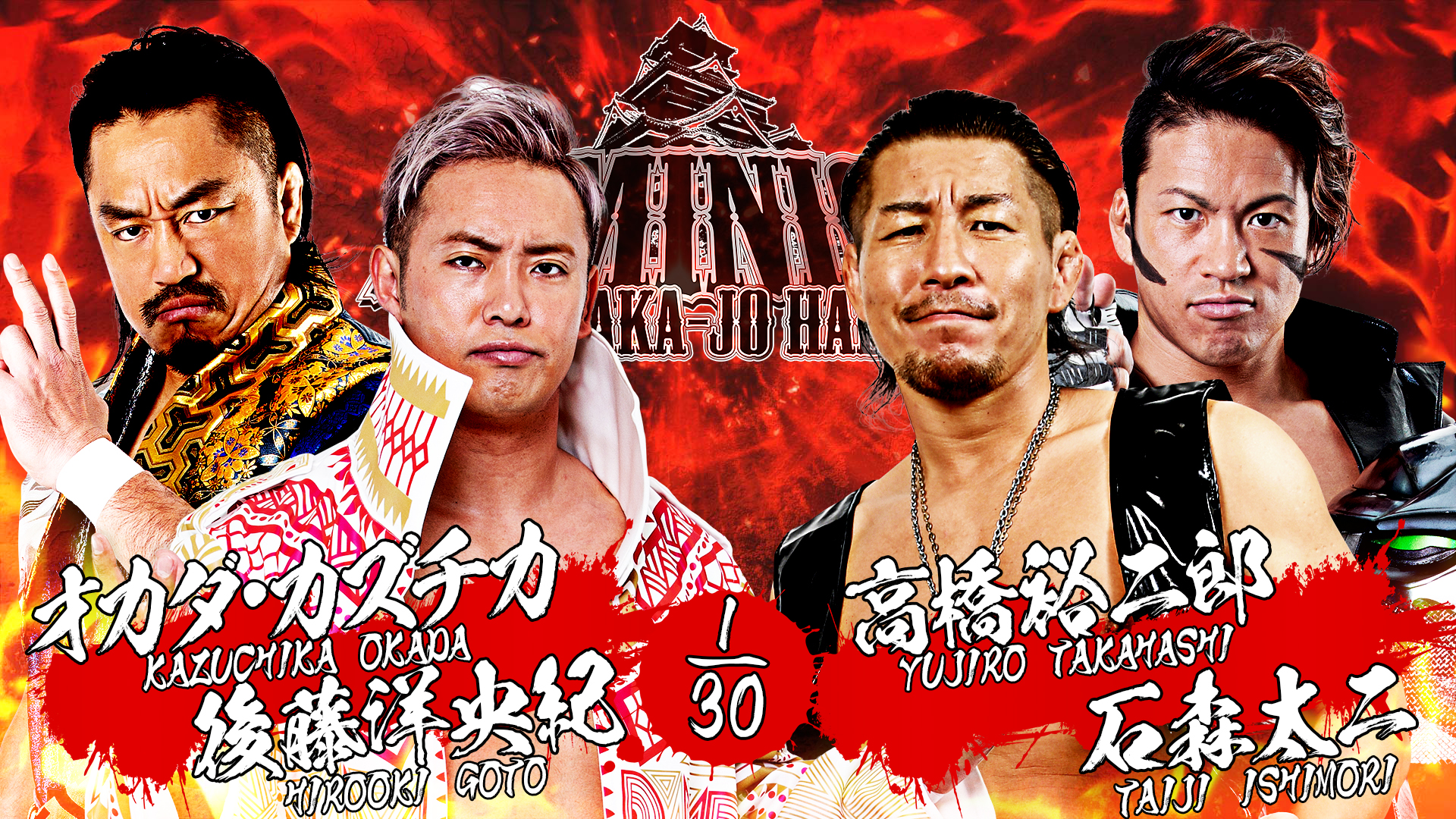 A big night for BULLET CLUB in Osaka Jo Hall Saturday started with Yujiro Takahashi and Taiji Ishimori scooping victory over SANADA and BUSHI, and ended in shocking form when the factions ranks grew with the addition of the King of Darkness EVIL.

Yujiro’s interference in the main event last night may have led Okada to flashback to six years prior, and Takahashi’s defection to BULLET CLUB from CHAOS at the then IWGP Champion’s expense. After losing the New Japan Cup final and now heading into his first Dominion in Osaka Jo Hall outside of the main event, Okada must now reset, and will do so by teaming with another man with deep distaste for the black and white franchise in Hirooki Goto. 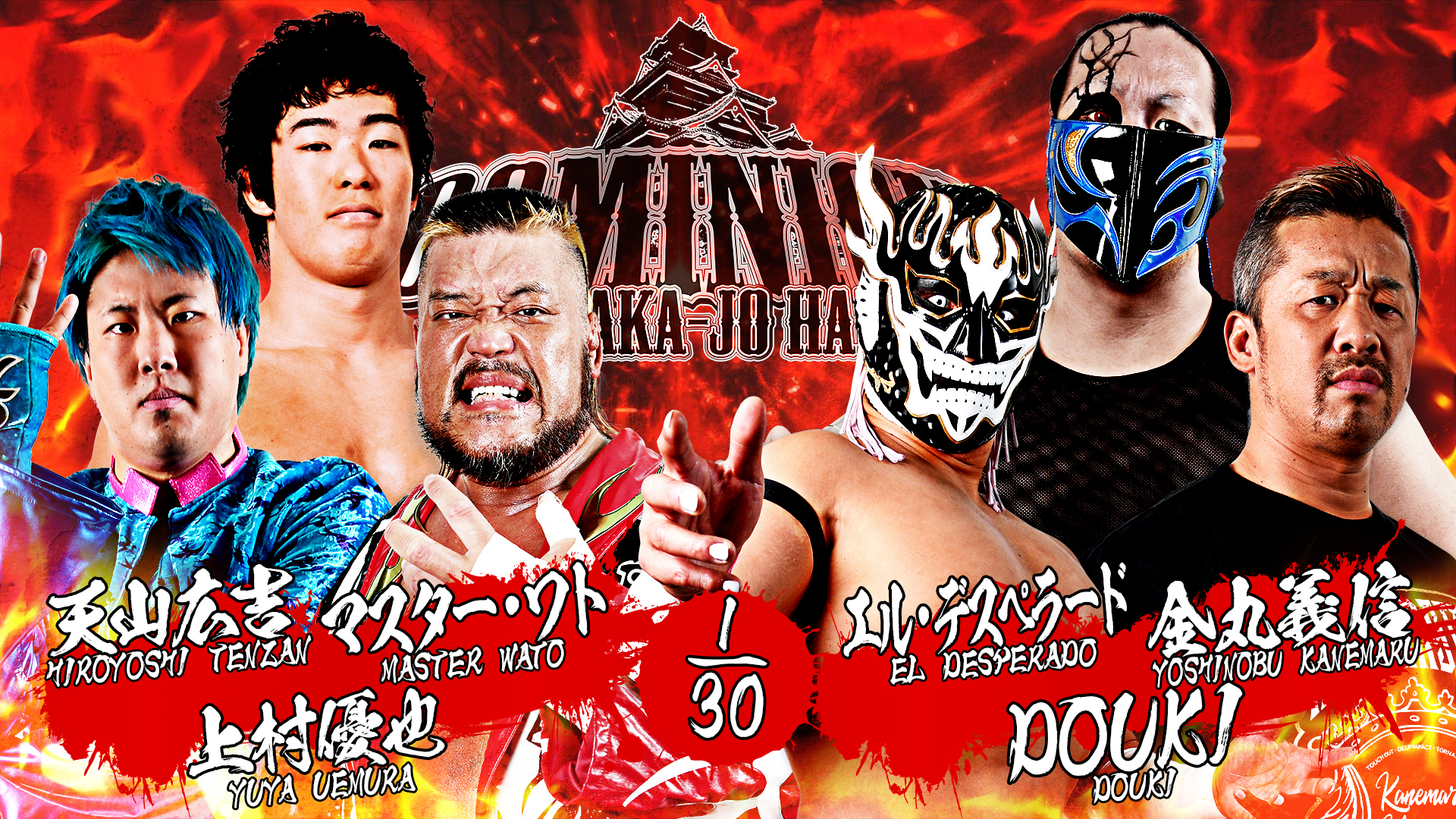 The third match of the evening sees Master Wato back in action after a successful debut last night. Then, it was the spectacular top rope RPP that saw Wato to victory over DOUKI, but during a post match celebration, Yoshinobu Kanemaru interfered. Tenzan would make the save for Wato out of what he would call ‘a sense of duty’, while Wato declared that if Suzuki-Gun wasn’t done with him then he would take out each of its members one by one. Kanemaru and Wato may be on a collision course, and it starts with this six man tag team contest. 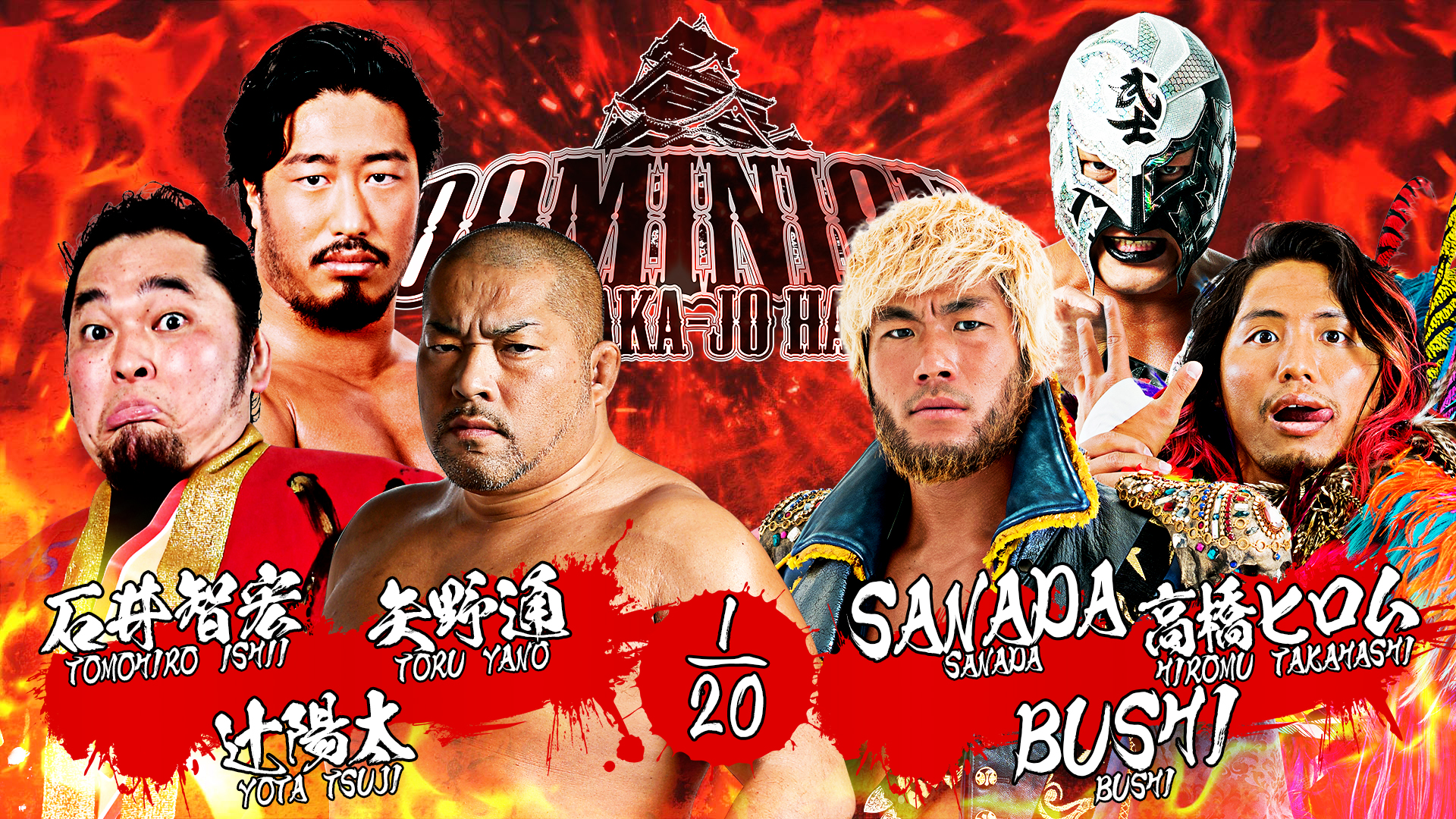 Less than 24 hours removed from a betrayal that will forever change the shape of Los Ingobernables De japon, the faction must reset tonight in six man tag team action. As SANADA and BUSHI attempt to rebuild from New Japan Cup exits and a tag team loss last night, Hiromu Takahashi, with a lot of junior heavyweight competition but no immediately apparent challenger to his IWGP Junior Heavyweight Championship, may also seek to make a mark. 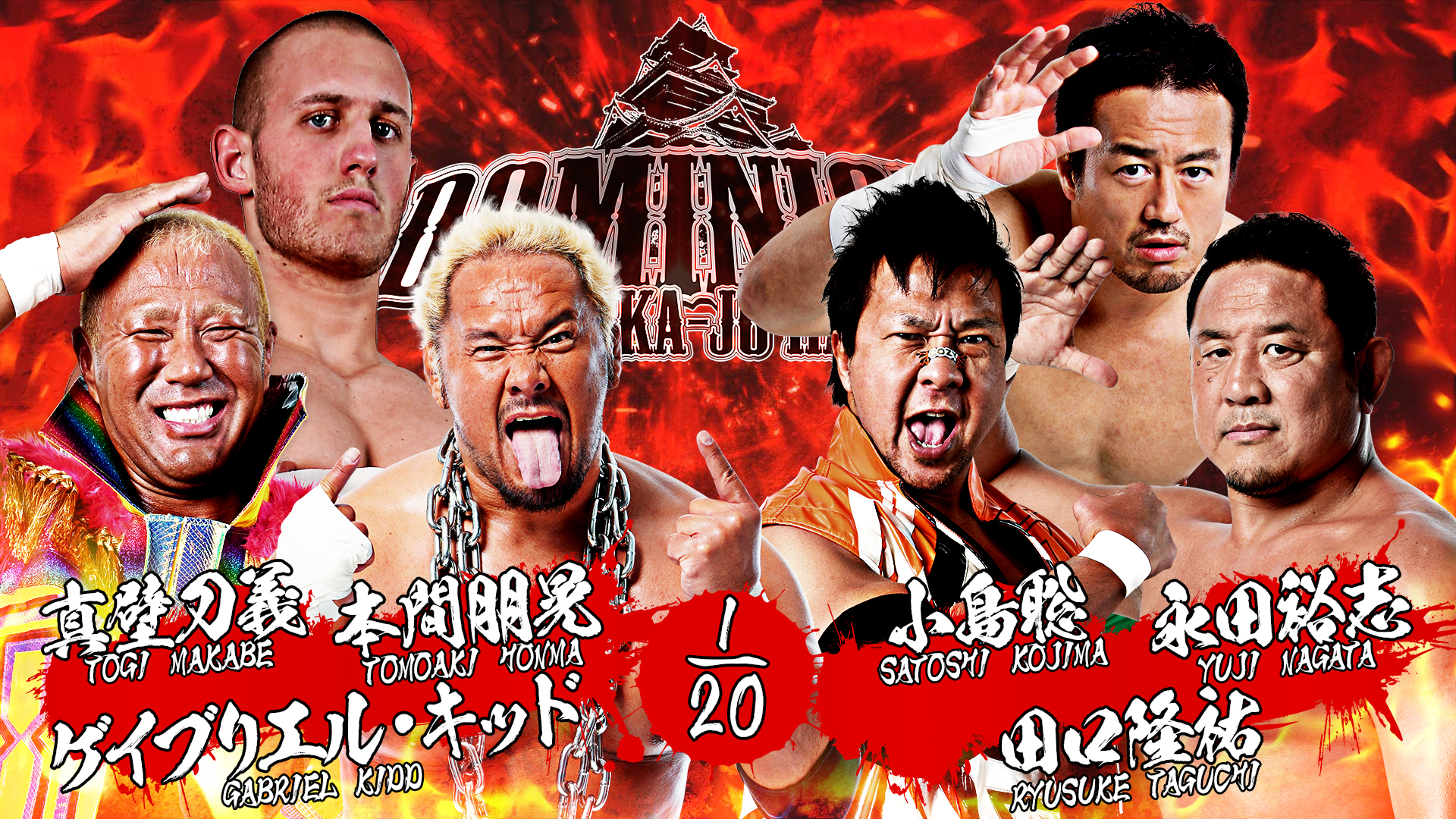 The opening match of the night sees a six man combination of veterans and promising young prospect Gabriel Kidd. Kidd certainly made his presence felt against Kojima and Tenzan last night in Osaka, with some impressive fighting spirit and the clear support of even the limited crowd in Jo Hall. Now another big opportunity comes for the La Dojo member at the learning tree in a big way at Dominion.