At a post Dominion press conference in Tokyo on July 13, EVIL first addressed the world as double IWGP Intercontinental and Heavyweight Champion, with plenty to answer for after a controversial weekend, but still with little to say. 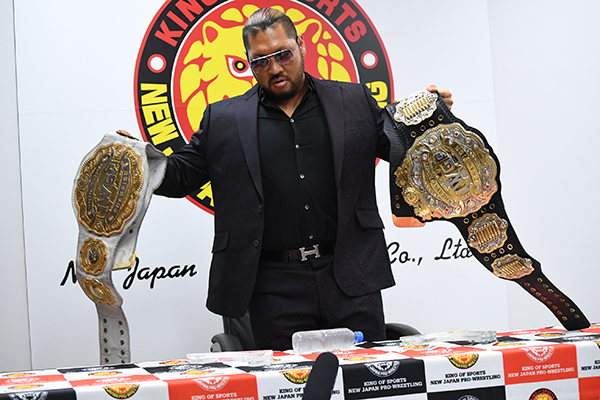 EVIL: I’ll say once again. Between the New japan Cup and these two titles, I am the first triple crown champion in history, and I have the best pareja there is in Dick Togo. Any questions?

–On July 11, the world was shocked when you joined BULLET CLUB. Why did you make that decision?

EVIL: Isn’t it obvious? I said it before. By any means necessary. I planned this all out. BULLET CLUB are the best team there’s ever been.

–Do you have any thoughts on your former partners in Los Ingobernables De Japon?

–EVIL, you are currently a NEVER 6-Man Tag Team Champion with two LIJ members. What will you do with that belt?

EVIL: That belt? That piece of crap? I don’t need it.

–What thoughts do you have on your match last night with Tetsuya Naito?

EVIL: Watch the match and you’ll see all there is to say. I saw right through everything he had to offer.

–In Aichi you will face Hiromu Takahashi, after he called you out on the mic last night. What do you think of that match?

EVIL: Hey Hiromu, you 100% yet? Can your neck survive my offence? Hmph.

–You now hold both the IWGP Intercontinental and Heavyweight Championships. How does that feel?