Ace’s HIGH #13: Assistant to a Genius 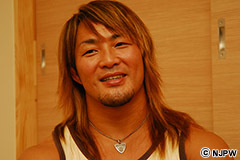 <–Ace’s HIGH #12 Rooming with The Wrestler

–We’ve touched on how hard the training in the Dojo had been; did you ever think for an instant that you wanted to quit?

Tanahashi: No, not once. I never once thought of quitting.

–Sometimes you hear stories of trainees running away in the middle of the night.

Tanahashi: Everybody in my set was much more focused. Kenzo Suzuki was convinced he’d make it through one way or the other and (Katsuyori) Shibata and (Wataru) Inoue were both very driven, too.

–You were all very determined. Young Lions are often assigned to experienced wrestlers to work as their assistant. Who did you work with?

Tanahashi: Before I debuted, I worked for (Keiji) Muto. Inoue worked for Kensuke Sasaki, Makabe with Riki Choshu and Suzuki with Tatsumi Fujinami.

–How do those assignments get made?

Tanahashi: Honestly, I think it was all random. Maybe there’s some nominations going on, but they don’t let the young guys in on that.

–Growing up a fan of Muto’s, it must have been a big deal to become his assistant.

Tanahashi: Yeah, I was really excited for it. It was a new experience as well, it was something fresh. 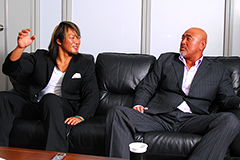 –What was it like to be up close and personal with Muto?

Tanahashi: His size really hits you. And he doesn’t really switch off. The way you hear him talk on TV is exactly how he talks in general conversation. He really is the same guy.

–The real thing. You hear a lot of stories about having to work as a wrestler’s assistant, but it sounds like you enjoyed it.

Tanahashi: Oh, yeah. But I think that I got off lightly a little bit. Muto wrestled a lot in the US, and over there you do everything by yourself fr yourself, so all I really had to do was his laundry, and make sure he had soap and a towel ready when he went for a bath; stuff like that.

Tanahashi: yeah. And he’d often go to the gym on off days, so he would give me a shout and we’d work out together.

–Did he go hard on those workouts?

Tanahashi: Yeah he did. That was another thing I’d have to do; find a gym in every town for him. That taught me a valuable lesson, to work out whenever you have a moment free. That’s how you get as strong as Muto.

–We often think about graceful moonsaults and the like when we think about Muto, but he was just as strong as a Kensuke Sasaki.

Tanahashi: I liked to think I was pretty strong. So I’d go and put a big weight on the bar, and he would come and call me out like ‘why are you lifting those tiny weights?’ Then he would blow me away. We competed a lot in the gym.

–He was definitely dedicated.

–Did you eat together much?

Tanahashi: Yeah, we did, every now and then. He had this amazing star power, people would be calling out to him wherever we went. He took me to a lot of fancy places, all these restaurants in Ginza…

Tanahashi: To a 22 year old country kid like me? Hell yeah it was! I just remember thinking ‘everybody looks so pretty here…’ (laughs)

–All the hostesses in the clubs (laughs).

Tanahashi: Yeah! He’d be laughing it up with the hostesses, and I’d be sat on the edge of the sofa, nursing a drink and making sure nobody got in trouble, least of all me.

–So not entirely relaxed.

Tanahashi: But it was still a lot of fun. We’d be out together and I’d hear all the whispers ‘oh, that’s Keiji Muto!’, and all that. Part of me would be thinking how cool it was to hang out with a star, and another part would be thinking someday I would outdo him.

–You learned a lot.

Tanahashi: Absolutely. And it was a cushy job work wise. But then started working for Choshu as well…

Next week- The Long and Riki Road!