Eight men to compete for future IWGP US Championship opportunity 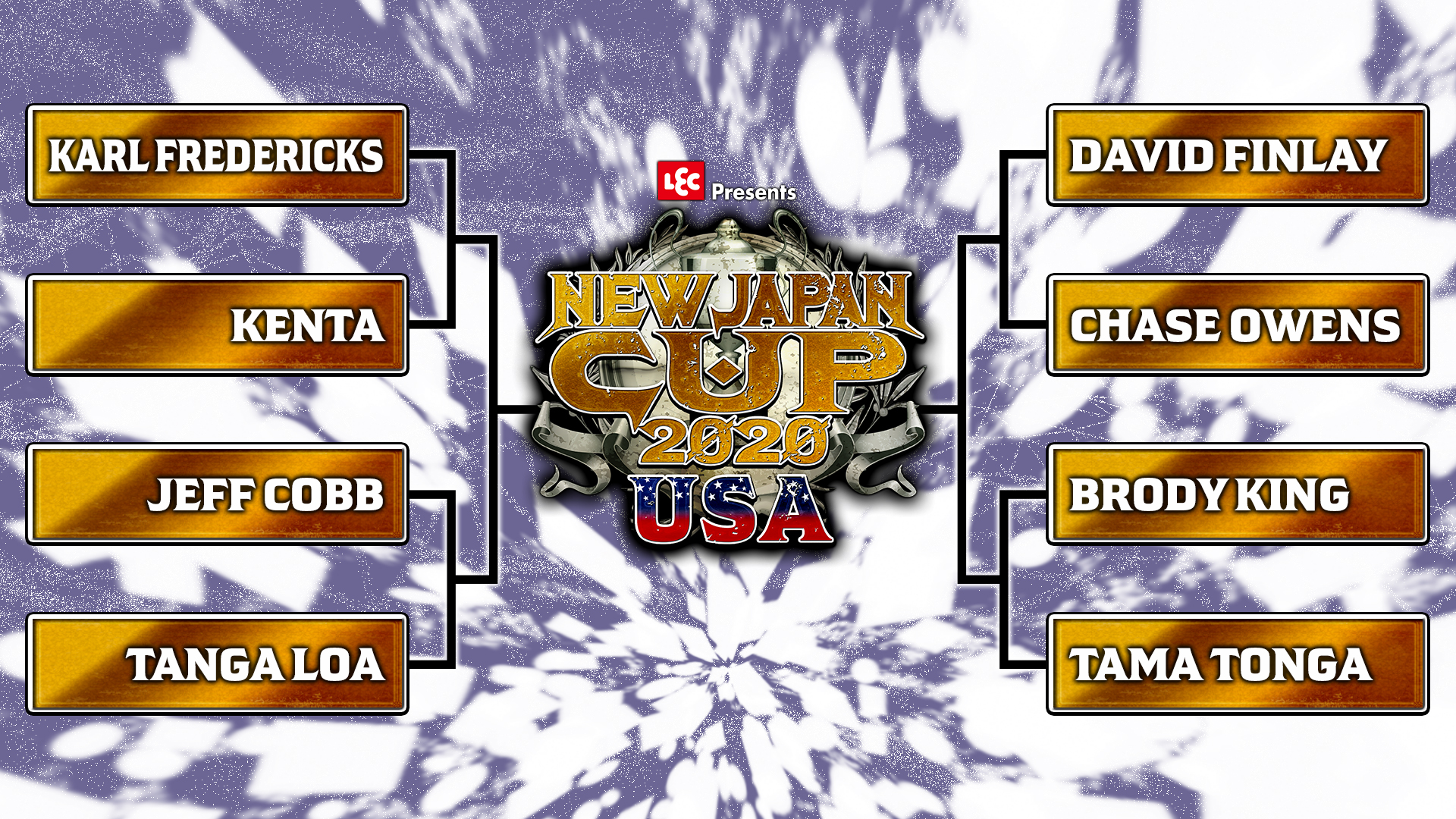 On August 7, NJPW STRONG makes its hotly anticipated debut on NJPW World. Starting this new weekly venture hot will be New Japan Cup USA, an eight man single elimination tournament where the winner will have a future opportunity for the IWGP United States Heavyweight Championship.

Episode one will see all four first round matchups, with the lineup as follows: 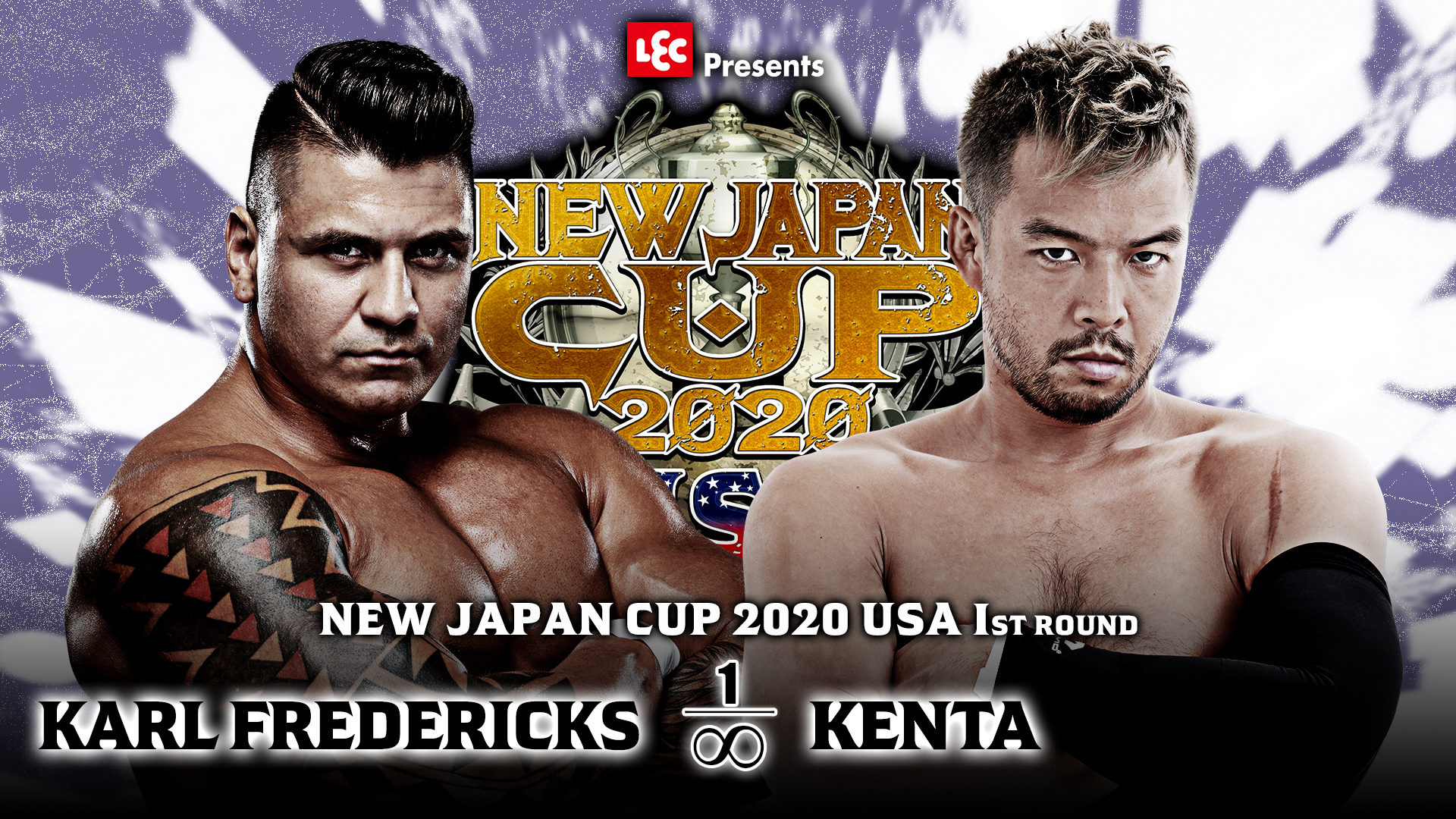 Although that new attitude was brought into check by Jeff Cobb at the season finale of Lion’s Break Collision, Fredericks is nonetheless in peak form going into this bout with KENTA, and with strong personal motivation. The influence of Katsuyori Shibata on Fredericks is no secret, and KENTA’s betrayal of his former best friend to join BULLET CLUB almost one year ago is still fresh in the young ‘Alpha’s’ memory. Throughout Lion’s Break Collision, Fredericks was insistent that the faction system at play in New Japan Pro-Wrestling was not for him, and that he wouldn’t be rushing to join a group for acceptance in the same way that he feels his first round opponent had.

Can Fredericks score the biggest win of his young career and move a step closer to IWGP United States gold? Or will it be KENTA stamping his authority on NJPW STRONG? 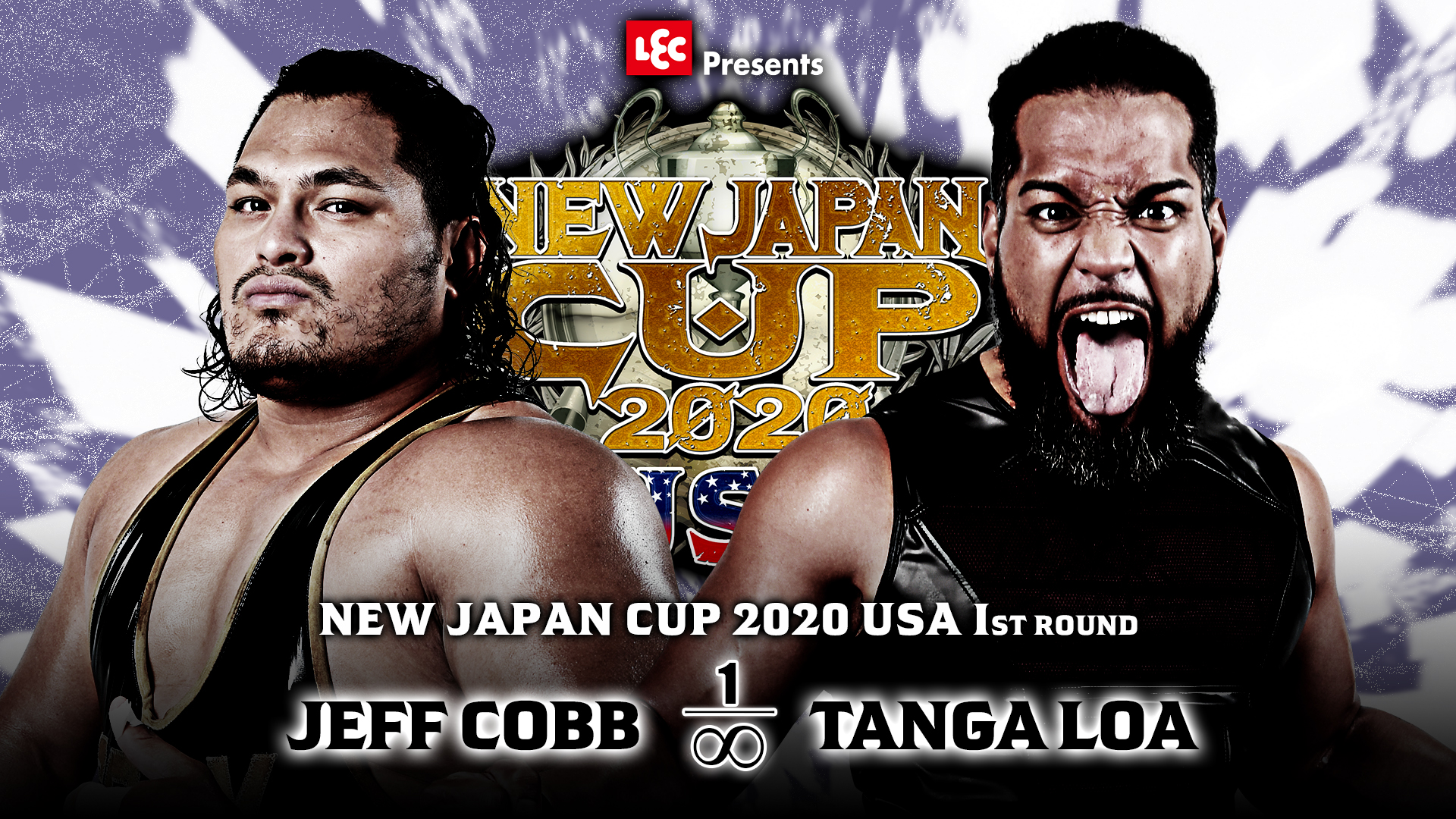 Originally scheduled to face Togi Makabe and David Finlay respectively when the New Japan Cup was originally announced for Japan, Jeff Cobb and Tanga Loa now face off in the first round of New Japan Cup USA. A former six time IWGP Tag Team Champion, Tanga Loa’s singles record is of bigger question; believe it or not, this will be Tanga Loa’s second ever singles match in NJPW, and the first in three years (for the record, that first match in New Japan Cup 2017 against Yuji Nagata ended in a loss).

For his part, Jeff Cobb is on fine form, having scored a hard fought victory over Karl Fredericks in the main event of Lion’s Break Collision’s season finale. Already with NJPW tournament experience after last year’s G1 Climax saw him to a respectable eight points, Cobb is defeated one on one in NJPW thus far this year between new Beginning USA and Lion’s Break Collision, and he’s looking to ride that wave on the way to a Tour of the Islands for one half of GoD. 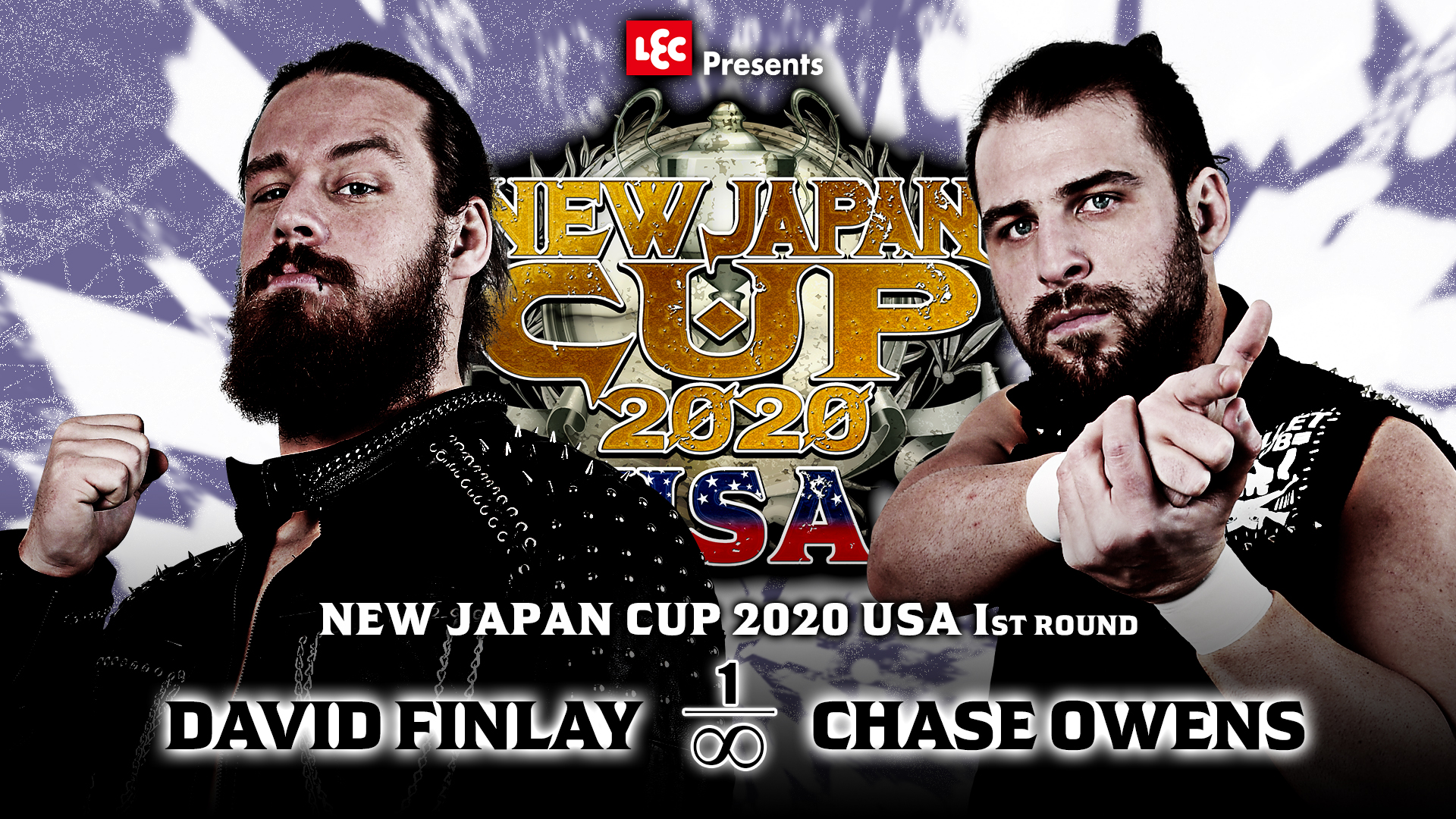 The only pairing in the New Japan Cup that isn’t a first time meeting, Chase Owens and David Finlay’s sole singles meeting was nevertheless way back in 2016, and ‘Big Match Debbie’ has progressed a long way since his defeat to BULLET CLUB’s Crown Jewel all those years ago in Iwate.

That said, his proudest achievements of World Tag League 2019 victory and the IWGP Tag Team Championships have been attained with Juice Robinson at his side. With the Flamboyant One injured for the time being and taking the every man for himself format of the New Japan Cup into account, Finlay must deliver in only his second singles match since returning from shoulder injury in late 2019.

Appropriately enough that singles contest was a battle for the IWGP (United States Heavyweight Championship against then title holder Lance Archer; Finlay now gets a chance to reset and start another drive for the red and gold. Owens is no opponent to be looked past however; the canny in-ring style and ability to bend the rules in his favour could make Owens the dark horse of this tournament; don’t forget that in last year’s New Japan Cup a victory over Juice put Owens on his own path to challenge for the United States title last spring. Both men will be highly motivated to move on in the cup and leave a solid mark on NJPW STRONG in the process. 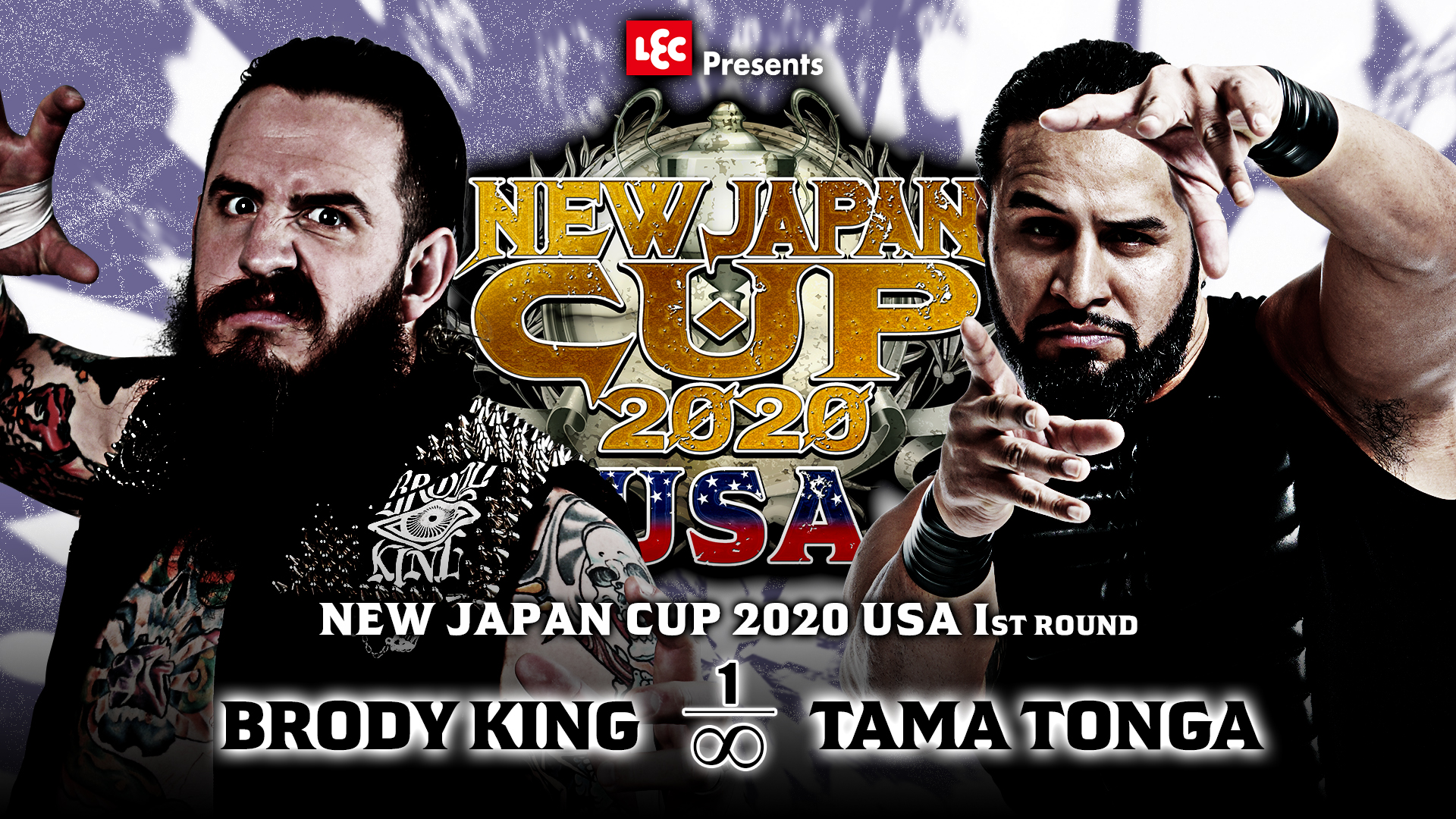 Our final first round matchup sees ROH’s Brody King face off against Tama Tonga. NJPW fans were first introduced to Brody King during last year’s Best of the Super Juniors tour, where his incredible size, strength and power made his lucha influenced style and high flying ability all the more impressive. Now on STRONG King has the opportunity to make sure his name is on the lips of every NJPW fan once more.

Standing in his way is Tama Tonga. The fourth BULLET CLUB member in as many first round matchups, Tonga is no doubt intent on ensuring that the Cup, and subsequently the IWGP US Heavyweight Championship, makes its way to the faction by any means necessary. Should the ‘Good Bad Guy’ himself make take that spot, so much the better for Tonga.