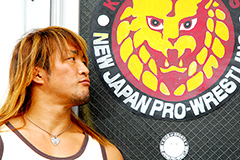 –So we’re finally getting to talk about the start of your in-ring career this time. October 10 1999, you debut against the man we now know as Togi Makabe. How far in advance did they tell you you were going to be starting out?

Tanahashi: It was about one month before. I’m blanking on who told us, actually, but they got me (Wataru) Inoue and (Katsuyori) Shibata together and said ‘we want to start you on October 10, Korakuen’.

–That must have made the rivalry between all of you all the more intense.

Tanahashi: Oh, absolutely. I would train with everybody in the morning and then double down with individual training in the evening.

–You trained a lot with Black Cat at the time, right?

Tanahashi: Yeah, that’s right. So actually that meant I was training three times a day! After morning group training Black Cat took me and Kenzo (Suzuki) to this other little gym he knew.

–He’d taken a shine to you two.

Tanahashi: I think so. We were both getting big.

–When they told you you were debuting, did you know it would be against Makabe?

Tanahashi: Yeah, they said ‘Tanahashi, you and Makabe, Inoue and Shibata in a singles’. That meant every day had a lot of tension to it. Like, I was rooming with my opponent every night, you know?

–Right! That must have been pretty tense.

Tanahashi: But Makabe didn’t really seem to fazed by it. I guess it was a bit like being in a high school wrestling tournament and then facing someone from the same school in one of the matchups. But I was a lot more wound up about it.

–It was all a one-way street.

–Haha! Did it mean a lot to debut in Korakuen Hall especially?

Tanahashi: Oh yeah. The other senpai would be telling me it meant a lot to get your debut there. Especially back then, the usual deal would be to test out new wrestlers by debuting them in the smaller towns, so it was definitely exciting to be in Korakuen off the bat.

–That card was the night before NJPW ran the Tokyo Dome, wasn’t it.

Tanahashi: Yeah, it was a fan fest kind of thing. There was a public contract signing, and then a couple matches which were our debuts. That was the momentum of NJPW at the time, we were using Korakuen Hall for a couple of matches with kids who hadn’t debuted yet.

–Two or three Tokyo Dome cards every year as well. What do you remember of the match?

Tanahashi: These days I don’t get nervous at all, but I was an absolute wreck!

Tanahashi: I was young and had to have been in better shape than I am now, but the nerves meant I was blown up about two or three minutes in. That being of a six minute match before I lost. It was definitely a baptism of fire.

–You definitely impressed look wise, though.

Tanahashi: That really helped me. When I walked out, everybody was surprised to see just how big I was and that really gave me a lot of confidence. A lot of those fans were thinking something huge was about to happen… It didn’t then at least… (laughs).

Tanahashi: Yeah. But there are fans that still now come up to me and talk about being at my debut. I left a mark on some people at least.

–Around that time, it seemed that every single company event or PR junket you were part of, you were taking your shirt off. Was that something you were told to do, or…?

Tanahashi: Haha! No, that was my doing. The only direction I got was to make sure I showed off my physique.

–How did you get on with your senpai at this stage?

Tanahashi: Hmm, OK, but Kenzo was much more stacked and had that sports background, so expectations were high for him. A lot would be left to him while I was more of the all-rounder.

–And definitely the most dedicated person there was when it came to training.

–You would come to have a more cut look, but it was all size in the early days.

Tanahashi: It would always be a little joke at the gym that my shoulders were wider than the treadmill, so it looked pretty comical when I was running. I was almost cartoonish.

–Did that restrict your motion a bit?

Tanahashi: I did start to feel it in my knees, just the sheer weight. I was fairly flexible all the same.

–Your bridge was definitely something to see!